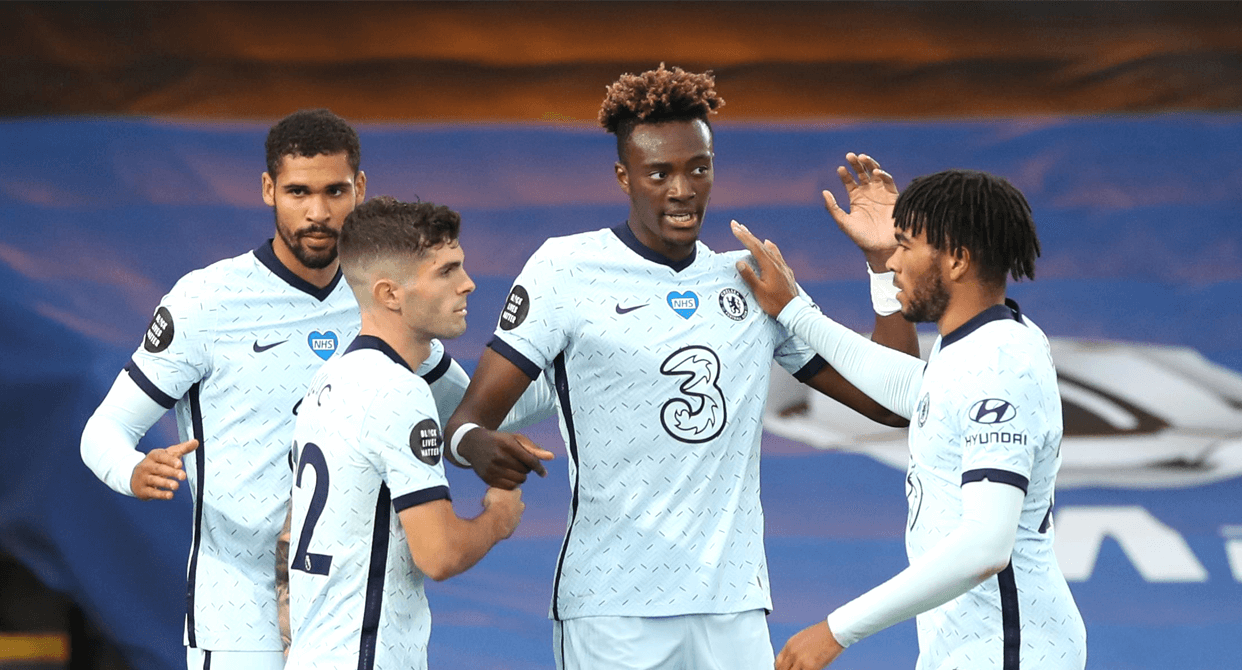 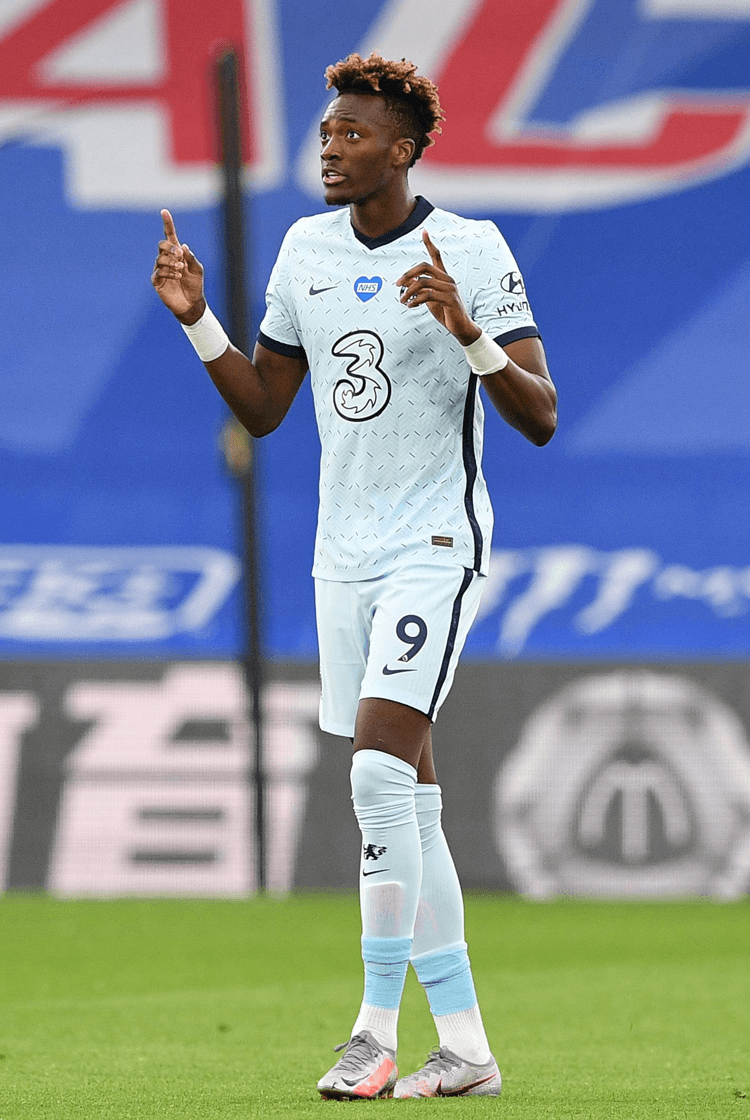 Chelsea edged closer to qualifying for the Champions League with a victory at Crystal Palace that took them into the Premier League's top three. Despite conceding when Wilfried Zaha superbly struck from distance and Christian Benteke scored, finishes from Olivier Giroud, Christian Pulisic and Tammy Abraham gave them the three points they required to move one ahead of Leicester City. Abraham's goal had put them 3-1 up, but a late header from Scott Dann almost rescued a point for the hosts when it struck the inside of the post, ensuring they suffered a fourth consecutive defeat. Victory for Chelsea also represented a win for Frank Lampard over his former England manager Roy Hodgson. "For the chances we create we don't score enough goals," Lampard said. "It changes the face of a game when you have chances and don't take them and nerves kick in. You can't feel secure in football matches if you keep giving goals away. We still have to learn from moments in our game and be better." 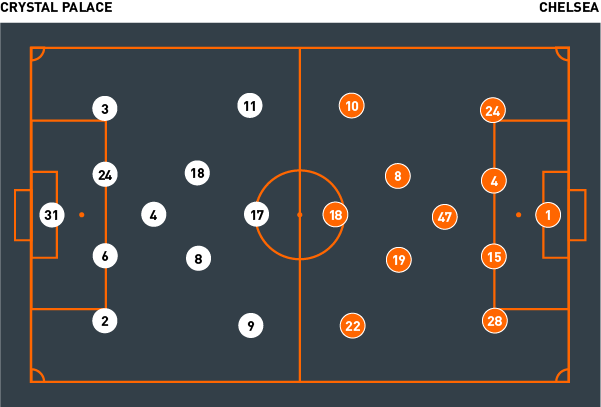 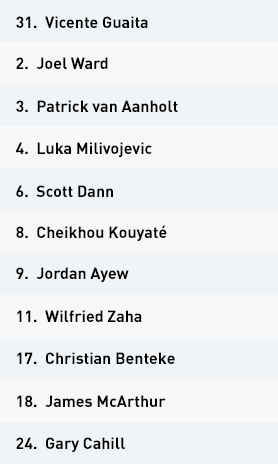 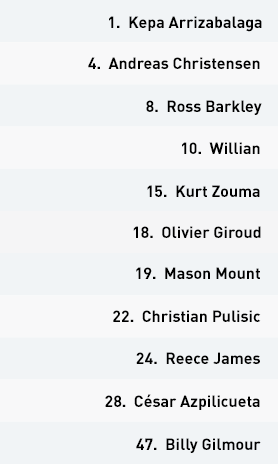 Roy Hodgson set Crystal Palace up in a 4-3-3 formation during the periods they had possession. Chelsea defended with a 4-1-4-1 in which the 19-year-old Billy Gilmour operated between defence and midfield, and Olivier Giroud was their lone striker.

Crystal Palace sought to force a scrappy, physical affair that suited their players and their playing style. Direct balls were played towards Christian Benteke, who was supported by teammates ready to compete for the second ball. The Belgian worked to occupy Chelsea's central defenders, but had mixed success at winning the first ball.

Palace also attempted lower, penetrative passes to his feet, and their midfielders or wide attackers offered support in a deeper position to receive a set to feet so that they would then be facing forwards ahead of making a quick pass to a wide attacker or an overlapping full-back. Benteke proved effective at drawing fouls in the final third, leading to opportunities to deliver the ball into the penalty area from set-pieces, from which Palace posed a significant threat.

The hosts' direct play was not limited to finding Benteke. They sent balls into the feet of Jordan Ayew, who like Benteke sought to pin the relevant defender back and to bring others into play. Wilfried Zaha stayed wide towards the left, moving from his marker to receive to feet before looking to beat his opponents.


Palace also played out from defence and initiated attacks by circulating the ball to Chelsea's attacking and midfield lines. The spaces in behind their defence line for their forwards to run into were therefore increased, as were the spaces between Chelsea’s defence and midfield, where Palace wanted to control second balls.

A further approach involved Palace using triangles, in wide areas, via a wide attackers, full-back and central midfielder,to create a passing option in a wide position that drew their opponents' attention while a penetrative run was being made inside on the blindside of those same opponents. Chelsea sought to negate these efforts by defending against that three, man-for-man, therefore increasing the pressure on the player making the penetrative run, even if that player regardless often still succeeded because of their momentum. Benteke's goal, scored following a cross from Patrick van Aanholt, owed to this approach.

The visitors occasionally pressed Palace high at their goal-kicks, but they predominantly defended with a mid-block. Giroud worked to screen Luka Milivojevic while applying pressure on the in-possession central defender. Ross Barkley and Mason Mount screened Palace’s two other central midfielders, and Gilmour moved to them if either attempted a penetrative run, ensuring the back four behind him was preserved, and in a position to focus on Palace's front three.

Chelsea were organised by their manager Frank Lampard into a 4-3-3 formation. They were confronted by opponents who used a 4-5-1 while they were without possession, through Wilfried Zaha and Jordan Ayew withdrawing into midfield.

They attempted to build possession from defence, starting with a two-on-one between their central defenders against Christian Benteke, often to Billy Gilmour; Mason Mount and Ross Barkley remained further forwards, attempting to position themselves between Palace's defence and midfield. Palace sought to apply a high press at Chelsea's goal-kicks, led by Benteke against their central defenders and Ayew and Zaha prioritising their full-backs. Their organisation made it difficult for Chelsea to progress in central areas of the pitch, so they instead favoured the half-spaces and wide areas.

A familiar pattern involved the wide attacker withdrawing inside to support in a deep position to force Palace to become more compact and, in turn, to create a diagonal passing line to a full-back. When the relevant full-back received possession he would feed the wide attacker in front of him; Willian and Christian Pulisic therefore regularly received while facing forwards, and succeeded in switching wings and running at their opponents.


Barkley and Mount contributed to those efforts to attack into those wide areas, and when they did so, Willian and Pulisic often drifted inside. Gilmour remained behind the ball to offer a recycling option, and he impressed in moving away from pressure and retaining possession, even if his passing was rarely ambitious. Direct balls were also attempted towards Olivier Giroud if Palace applied pressure in particularly high territory, but he struggled to hold and link play as he can.

The willingness of both teams to play directly meant that the ball was often in the air, and that second balls often became their focus. Chelsea's rhythm was disrupted as a consequence, and they therefore struggled to break down Palace, who were comfortable with the nature of what was unfolding and succeeded in winning 63% of the evening's aerial duels.

Transitional moments also occurred, because of the scrappy play, but Chelsea relished these and scored their second and third goals during them. Chelsea's most dangerous counters often came after Palace had attempted one, and were therefore less secure and organised behind the ball.