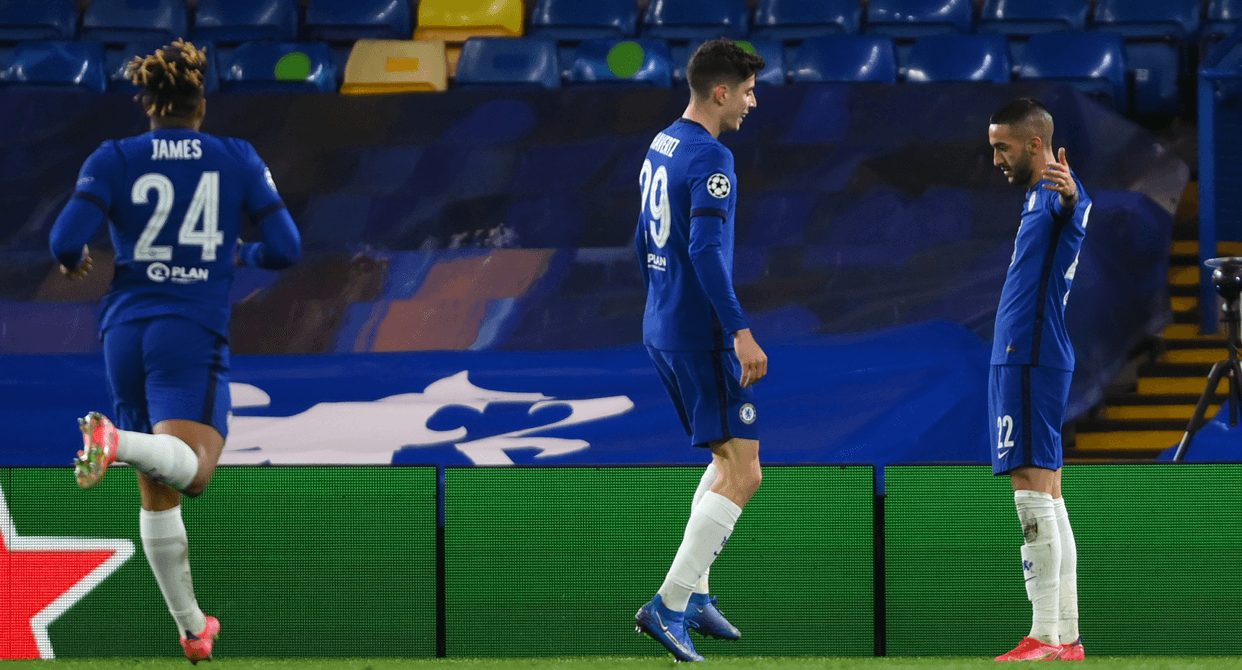 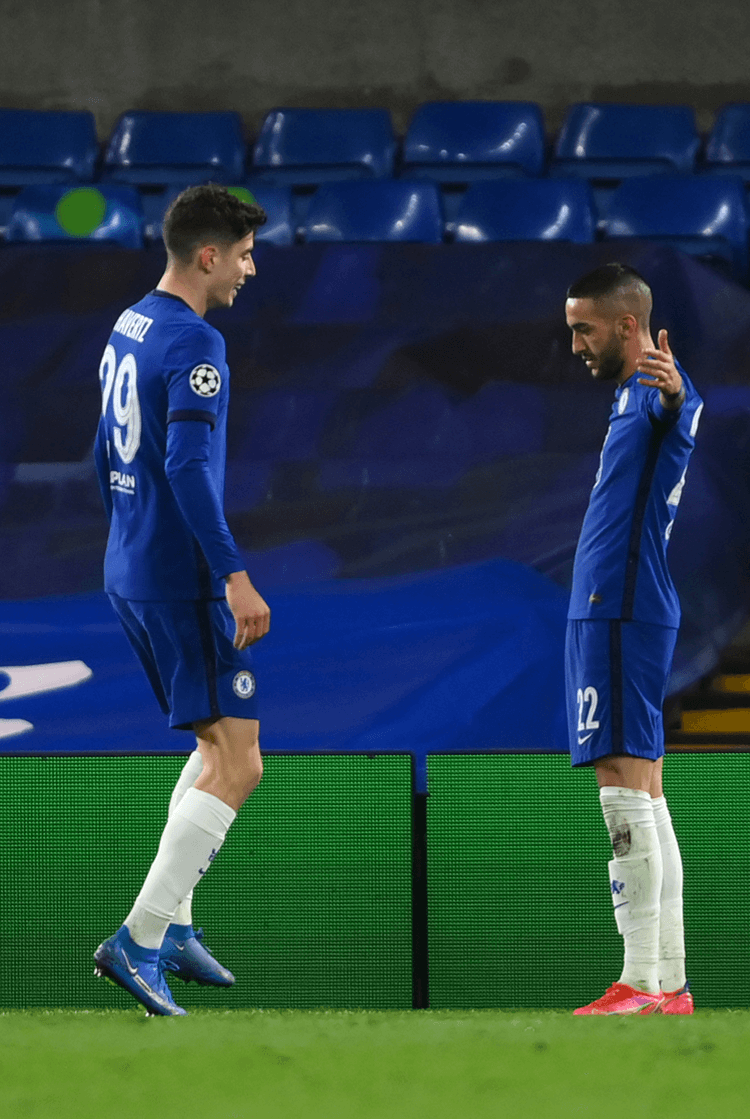 Chelsea advanced to the quarter finals of the Champions League by impressively beating La Liga leaders Atlético Madrid. A first-half strike from Hakim Ziyech gave Thomas Tuchel's improving side the lead, and Emerson Palmieri's finish in second-half stoppage time secured a 3-0 aggregate victory over one of Europe's strongest teams. "They play with a special bond and performances and results like this give you a certain edge and glue to achieve special things," said Tuchel, who led Paris Saint-Germain to the final in 2019/20. "You can only achieve this through results and experiences. I'm pretty sure no one wants to play against us." His opposite number, Diego Simeone, said: "They were fair winners. The first game was even and (in the second leg) they were superior. We tried to pressure them high and make it difficult for them to get out, but they went ahead again.” Chelsea, incidentally, became the first English club to eliminate Atlético from European competition since Bolton, then managed by Gary Megson, in 2007/08. 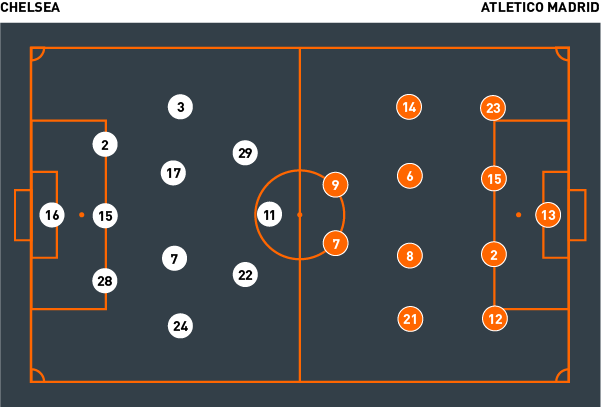 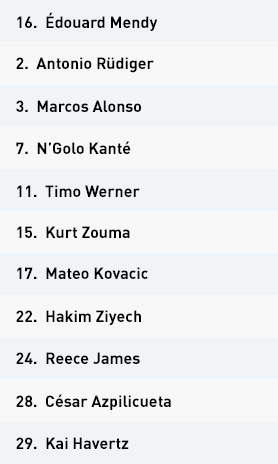 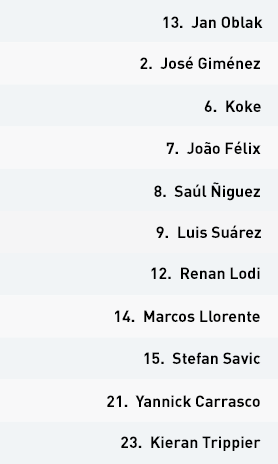 Thomas Tuchel again set Chelsea up into the 3-4-2-1 formation that has provided the platform for his promising start as their manager. Atlético Madrid defended with a 4-2-3-1, and attempted to apply higher pressure to their opponents.

Chelsea's wider central defenders were targeted by Atlético's wide forwards, their wing-backs Reece James and Marcos Alonso by their opposing full-backs, and Luis Suárez, Atlético's most advanced attacker, pressed the remaining central defender and attempted to cover in front of Chelsea's two central midfielders – the deeper of which was taken by João Félix. With Atlético regardless struggling to cover both Mateo Kovacic and N'Golo Kanté without risking leaving their back four short of cover – not least given their full-backs' instructions to advance – the two central midfielders proved capable of building through their pressure.

Tuchel's team also progressed possession by playing around that pressure – on the occasions Kovacic and Kanté were covered, one of Hakim Ziyech and Kai Havertz moved into a deeper position to receive, and either James or Alonso would also retreat to contribute, when first time passes through or over their opponents to Ziyech or Havertz succeeded. Chelsea, similarly, regularly countered via the pace of Timo Werner, who curved his runs outside of Atlético's two central defenders to attack into the spaces vacated by Atlético's full-backs.


It was through lengthier periods of possession that they were most consistently creative, and yet Chelsea took the lead when Werner ran around the outside of Atlético's defensive line before delivering the low cross from which Ziyech produced his first-time finish. Werner remained a threat during moments of transitions, and largely because throughout the second half both Ziyech and Havertz played early forward passes around their opposing defenders and into him.

When Diego Simeone's team withdrew into a compact, lower block, it was their combinations in the wide areas that proved Chelsea's most effective method of creating chances. Towards the right James advanced to in behind his opposing full-back, and was fed by penetrative passes from Ziyech before he sought to deliver crosses – both were also supported by César Azpilicueta, who from his withdrawn role contributed to attempts to switch to play to the left or also, from deeper territory, provide crosses into the penalty area. Towards the left,  where Chelsea were more fluid, Werner often rotated with Havertz, Alonso supported from the outside, and Antonio Rüdiger aggressively drove through the inside channel to draw opponents out of position before releasing the ball.

In an attempt to enhance Chelsea's efforts to build with width, Chelsea's two central midfielders moved forwards to provide a route into the wing-backs making forward runs, in turn inviting Ziyech and Havertz to adopt more advanced roles. The energy of Kanté, who mostly supported towards the right, provided cover during defensive transitions and ensured that he could consistently aggressively press across the pitch, and his forward movements also encouraged Havertz and Ziyech to move to between the lines and rotate and adapt as they sought to support James, Alonso and Werner.

Atlético Madrid were organised by their manager Diego Simeone into a 4-4-2 formation led by the front two of João Félix, who regularly adopted a more withdrawn position, and Luis Suárez. Their opponents, Chelsea, defended with a 5-4-1.

Simeone instructed his full-backs to advance when the opportunity was presented, and his central midfielders Koke and Saúl Ñíguez covered those full-backs' forward runs. Switches of play represented Atlético's most effective method of transitioning forwards, when their full-backs were willing to overlap around Marcos Llorente and Yannick Carrasco, who mostly remained in narrow positions and made runs from infield to behind Chelsea's wing-backs.

Félix's mobility, and the support he was offered around Chelsea's defensive midfielders, contributed to him posing their greatest attacking threat in the central spaces that existed. He was regularly fed by the full-backs attacking to either side of him; when his options to continue to progress possession were limited, the ball was often then returned into central midfield, from where Koke and Saúl played first-time, forward passes around or over Chelsea's defence and into the runs of Suárez, Carrasco and Llorente.

During the lengthier periods Chelsea adopted a deeper defensive block, Félix moved to instead focus on the inside channels, and when he drifted towards the left, Llorente and Kieran Trippier provided their attacking width from the right when, on the left, Carrasco held his position and Renan Lodi supported from a deeper position. Even with one of Atlético's central midfielders making forward runs to around Félix, Chelsea's back five – protected by a double pivot and Ziyech and Havertz either side of that double pivot – proved difficult to break down.

Félix, as a consequence, therefore moved into even deeper territory to operate as a third central midfielder, and Simeone replaced Suárez and Carrasco with Moussa Dembélé and Ángel Correa. With Félix continuing to withdraw to away from Chelsea's defensive line, Saúl adopted a position towards the left when Atlético sought to build possession, but those efforts, further rotations, and even the brief use of a back three ultimately brought them little success.