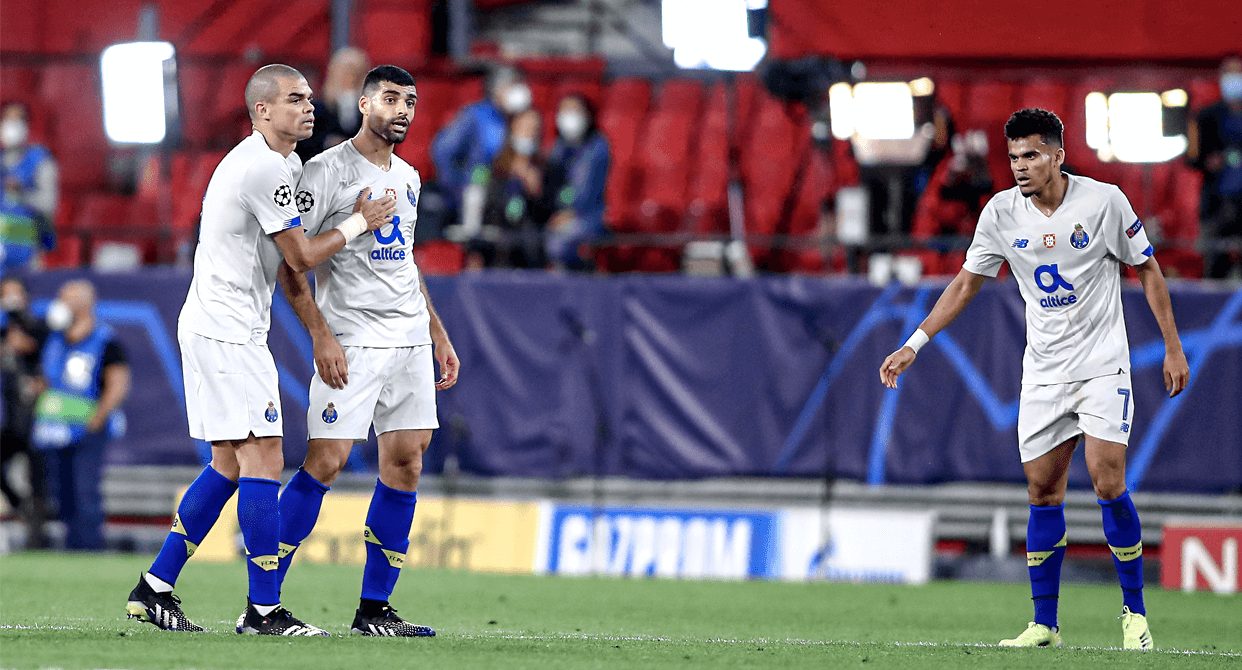 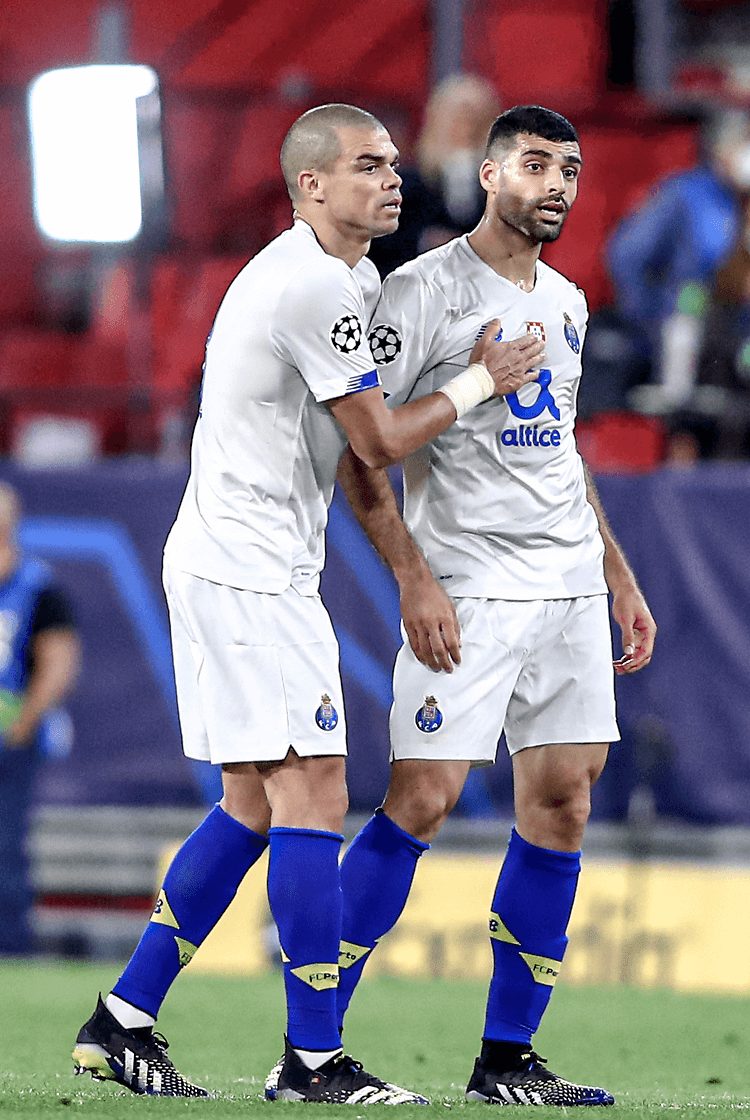 Chelsea progressed to the semi finals of the Champions League despite suffering defeat when Mehdi Taremi scored with a spectacular overhead kick in second-half stoppage time. Porto, who impressively eliminated Italian champions Juventus to reach the competition's final eight, lost 2-1 on aggregate to Thomas Tuchel's team, who will next meet either Liverpool or Real Madrid. "We will become a strong side," said Tuchel, who led Paris Saint-Germain to the final in 2019/20. "We could not finish it off with a goal so we had to hang in there. In general I like not to play against teams from your same league in the Champions League as it gives more of a feeling of a European competition but that is the only thing. The Liverpool tie is far from over but I will watch it for sure." His opposite number, Sergio Conceição, said: "This was one of the best matches Porto played in European competitions since we joined the club. If it wasn’t the best, it was close. I’m disappointed in the result, but very proud of what we did in the two matches. We were better than Chelsea." 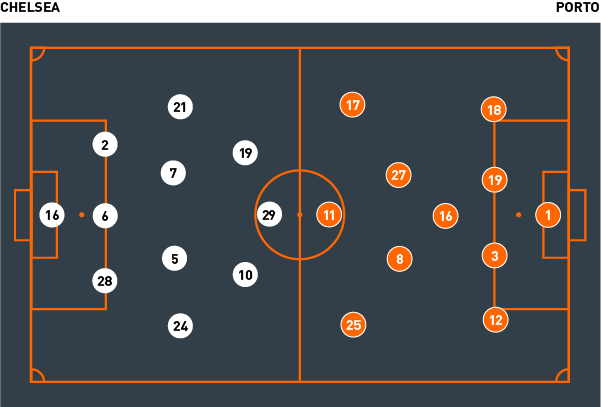 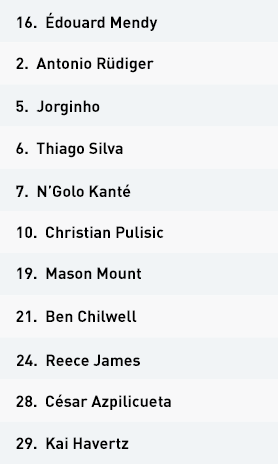 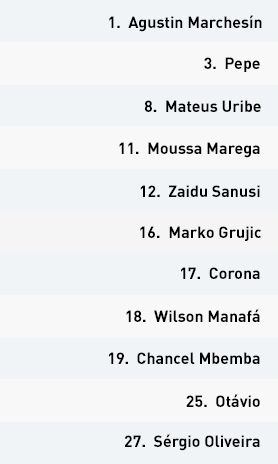 Chelsea again used the 3-4-2-1 formation Thomas Tuchel has so far favoured during his time as their manager. Their opponents, Porto, applied a high press, and if that didn't succeed, they then sought to delay Chelsea's attacks by withdrawing into a 4-5-1 and defending with a mid-block.

The influential Jorginho dictated the direction of their attacks from central midfield. He received possession from the central defenders behind him, and sought to bounce play via Mason Mount and Christian Pulisic, triggering forward runs from wing-backs Ben Chilwell and Reece James outside of Porto's defence.

Chelsea were mostly patient in possession – perhaps largely because of their two-goal lead – and, instead of risking playing into crowded areas of the pitch from midfield, would return possession to their defenders with the intention of changing their point of attack and drawing their opponents to towards the ball. That same patience was demonstrated if they were unable to create overloads; their attackers would instead retain the ball as those elsewhere moved. On the occasions Chelsea built from defence, they used width, space between their defenders, and speed of pass to bypass Porto's high press, and complemented doing so with movements from their attacking players, who withdrew into midfield and then advanced again to create forward passing options.

During lengthier periods of possession in the attacking half, Chelsea sought to occupy the channels across the full width of the pitch. Jorginho and N’Golo Kanté remained close to each other, James and Chilwell remained high and wide and outside of Porto's back four, and Mount and Pulisic played off different lines to receive either side of Kai Havertz, their central attacker.

Pulisic provided numerous options with which Chelsea could develop their attacks during the second half. By withdrawing into midfield, he looked to receive passes from defence and then combine with James, and in making that run would tempt a defender to follow him or create space – his ability to scan for space before taking possession and then play off very few touches made him difficult to negate. Mount, based on Havertz's movements, would also potentially replace him as their central attacker. Tuchel's team was increasingly committed to operating with height and width – Chilwell and James, particularly, remained as wide as possible.

Porto were organised by their manager Sergio Conceição into a 4-3-3 formation. Their hosts, Chelsea, defended with a 5-2-2-1.

During the early stages of their attempts to reduce the two-goal deficit dating back to the first leg, Porto's attacking players occupied narrow positions in the central areas of the pitch. Otávio and Mateus Uribe rotated, to support changes of tempo and play through Chelsea's back five, and attacking teammates started inside that defence, creating spaces in the wider areas for others.

When attacks were being built, Marko Grujic took up a deeper position to operate as a midfield pivot and protect the defence, and Uribe and Sérgio Oliveira operated at different heights, but closely together, to create clear passing lanes. The starting position of those attacks determined their nature; an alternative to building through the centre of the pitch involved a long ball in advance of Moussa Marega and beyond Chelsea's three central defenders; Wilson Manafá was similarly confident of driving into space from a wide position in the inside channel.

When he did so, Corona moved wider on the right in an attempt to capitalise on the space between Antonio Rüdiger and Ben Chilwell; there were also occasions when Manafá and Corona also rotated. The latter's willingness to withdraw into a deeper position similarly meant them playing out through him if regains were made in the defensive third, because that deeper position gave them the potential to break at pace, even if Chelsea's press regularly negated attempts to counter.

During the second half, Porto's frustration at Chelsea's mid-block and compactness meant them attempting to play more directly, either from defence and into their attackers, or via switching play, but the significant distances they attempted to cover with their ambitious passing meant that possession was too often conceded. Zaidu Sanusi advanced into midfield from left-back when possession progressed towards the right; Uribe also advanced from midfield and into Porto's attacking line to occupy an opposing defender.

If possession reached one of Porto's advanced full-backs, they sought to deliver crosses from deep positions. There were even times their attacking shape meant central defenders Chancel Mbemba and Pepe were alone in remaining withdrawn, even if Chelsea's defensive shape meant that that represented only a limited risk.

The visitors became increasingly reluctant to play out of their defensive third, which instead meant their goalkeeper Agustin Marchesín forcing play upfield as early as possible, therefore inviting their attacking players to remain advanced and preserve their energy, as well as to provide direct options.