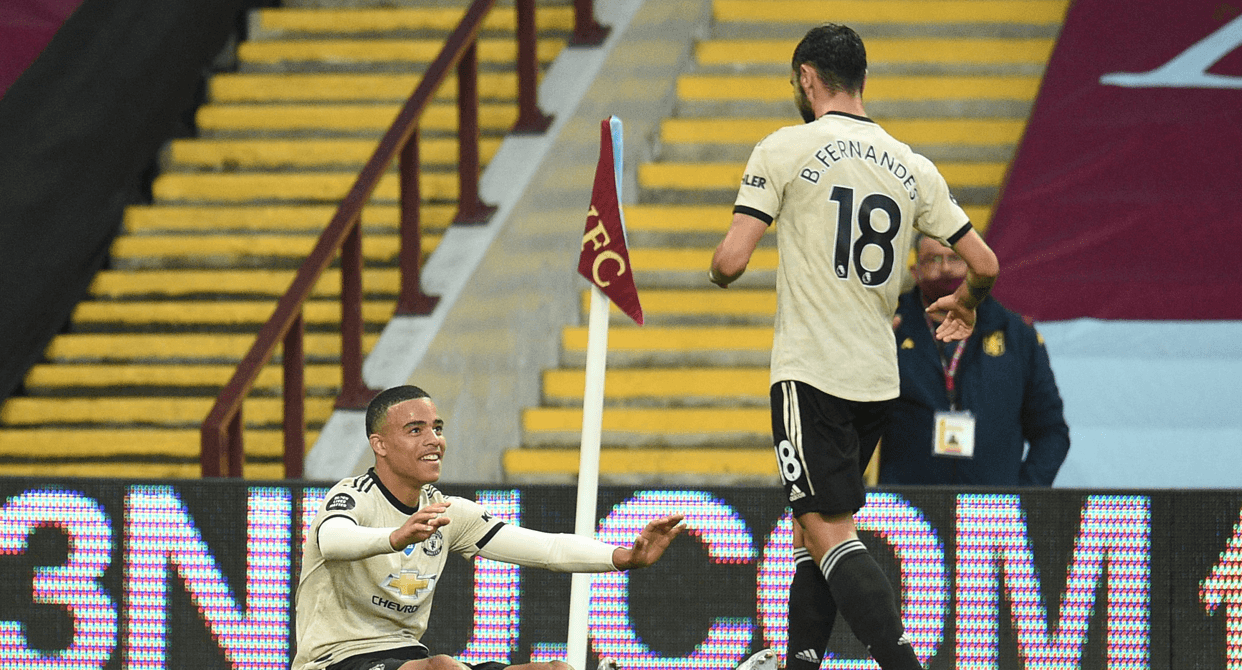 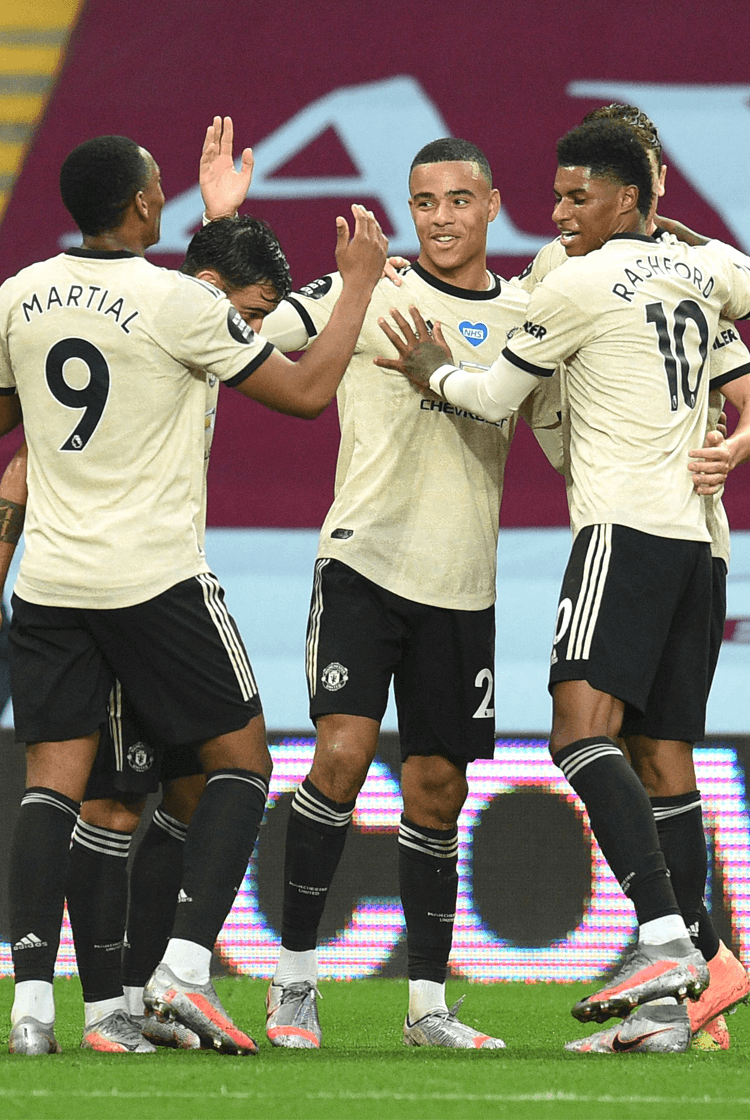 Bruno Fernandes and Mason Greenwood excelled once again as Manchester United strengthened their pursuit of Champions League football by easing to victory at Aston Villa. Ole Gunnar Solskjaer's team, unbeaten in 17, moved to within a point of fourth-placed Leicester with their latest impressive performance after Greenwood and Paul Pogba added further finishes to Fernandes' first-half penalty, and in doing so edged Villa closer to relegation. The hosts were left four points from safety with four remaining Premier League fixtures; United, meanwhile, became the first team in the competition's history to win four successive matches by a margin of three or more goals. "(Greenwood) is a natural footballer and has been in the academy since he was a little boy," Solskjaer said. "His dad showed me a picture of us together when he was seven. He knows we believe in him. You cannot leave players out when they score goals." 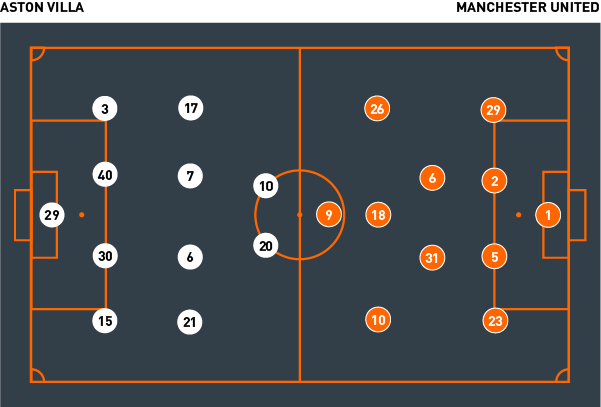 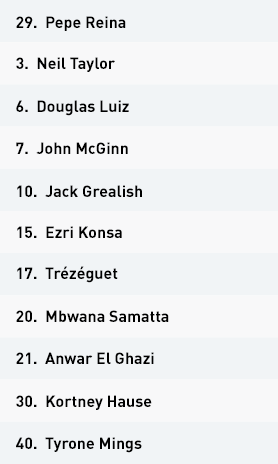 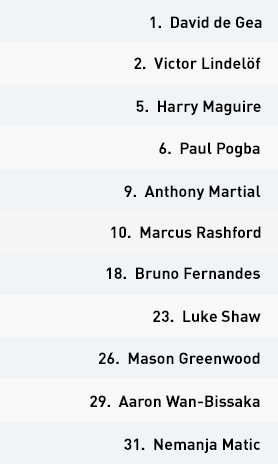 Aston Villa were organised by Dean Smith into a 4-4-2 formation in which Jack Grealish operated high in a central role, around Mbwana Samatta. When they retained possession for a sustained period Grealish would withdraw to around Manchester United's two defensive midfielders, to link midfield to attack.

From the right Anwar El Ghazi moved infield to provide support around Samatta, and often did so instead of Grealish, and around the visitors central defence. Trézéguet continued to provide their width from the left, and to combine with Neil Taylor; doing so contributed to reducing Mason Greenwood's ambition, and was also intended to limit United's potential on the counter. Despite those rotations, United’s 4-2-3-1 remained sufficiently compact to nullify Villa's attempted attacks.

Villa sought to find the runs of El Ghazi, and Grealish’s movements into central midfield helped move the ball quickly from defence to attack, but did so at the expense of quality in the final third. Despite regular advances beyond the visitors’ initial pressure, Villa struggled to penetrate beyond United's defence.

Although United used a 4-2-3-1 when defending in a set block, Paul Pogba conceded spaces that invited Villa to transition into attack, especially if the ball was won in midfield. United's wider players also regardless counter-pressed efficiently to either delay the ball and invite others to recover their defensive positions, or to aggressively and assertively duel for possession, frustrating Villa when they attempted to counter and encouraging United to quickly adopt their attacking structure. If Pogba or eventually Nemanja Matic delayed their attacks, Villa also failed to take advantage, during moments of transition, of United's full-backs advancing.


In their rare periods of sustained possession during the second half, Villa sought to build short and drew United’s attack with their press. When the spaces around United's double pivot therefore grew, Villa's full-backs sought to advance. If Samatta won the first contact from deliveries over United’s pressure, Grealish’s support around the second ball helped them to progress possession – often to those making runs in wide positions – but too few numbers attacked the crosses that followed.

If they adopted a 4-3-3, Grealish’s wider role increased the threat Villa posed in wider areas, but they then lacked the creativity he offers in more central positions. Using a midfield three created spaces away from United's double pivot, but even if they advanced into the final third their attacking threat remained minimal against a strong defence.

Ole Gunnar Solskjaer set Manchester United up in a 4-2-3-1 formation, but there were times when they had the ball that Nemanja Matic would withdraw into defence to form a three with their central defenders. Both full-backs then advanced into midfield to spread the visitors across the pitch to maintain possession. With Aston Villa using a 4-4-2 defensive block, United's overload in the first phase of their build-ups led to repeated progress into midfield, either by playing passes around Villa's front two or through a centre-back stepping into midfield.

The rotations between Bruno Fernandes and Mason Greenwood ensured the visitors progressed well into Villa's half. Greenwood moved from the right into a narrow position; Marcus Rashford then positioned himself either near Anthony Martial – as a secondary striker – or in an inside forward position on the left. United's structure most often resembled a 3-1-4-2 when building into attack.

Upon regains – particularly in the midfield third – both Rashford and Greenwood made immediate runs infield, and were ready to attack the spaces between the relevant central defender and full-back. Their width was then provided by their advanced full-backs, and Matic provided cover in front of their defence. Most of their transitional attacks brought limited success early, however, because Villa quickly recovered into two units of four to block off the central areas of the pitch.

Matic withdrawing into defence disrupted the hosts' midfield as the first half progressed, especially when he positioned himself to the left of Harry Maguire. Anwar El Ghazi pushed to press Matic and, in doing so, left spaces for United to exploit in their left inside channel. Fernandes or Rashford moved into this area and provided a crucial link to attack, resulting in consistent penetrations beyond Villa's midfield.


United’s transitional threat grew throughout the first half; Greenwood’s narrow position and direct running particularly troubled Villa. It was after one of Greenwood's breaks that Fernandes won the penalty from which he gave United the lead. Another drive forward from Greenwood – and a truly sensational finish – then doubled that lead at a time when Dean Smith's team had started to threaten.

Matic’s positioning continued to trouble Villa during the second half. He found Luke Shaw and Rashford with accurate passes to progress possession; Fernandes also played high alongside Martial to occupy both of Villa's central defenders, and Greenwood troubled Neil Taylor by isolating him. With Rashford able to drive inside with possession as Shaw overlapped, the visitors created a handful of efforts from range when Villa's defence remained compact. They instead found their range to score a third goal when Fernandes cut his corner back to Paul Pogba on the edge of the area, from where the Frenchman superbly bent a low effort past Pepe Reina. Martial also struck the crossbar late on with a powerful drive, again after a flowing move from United’s left.