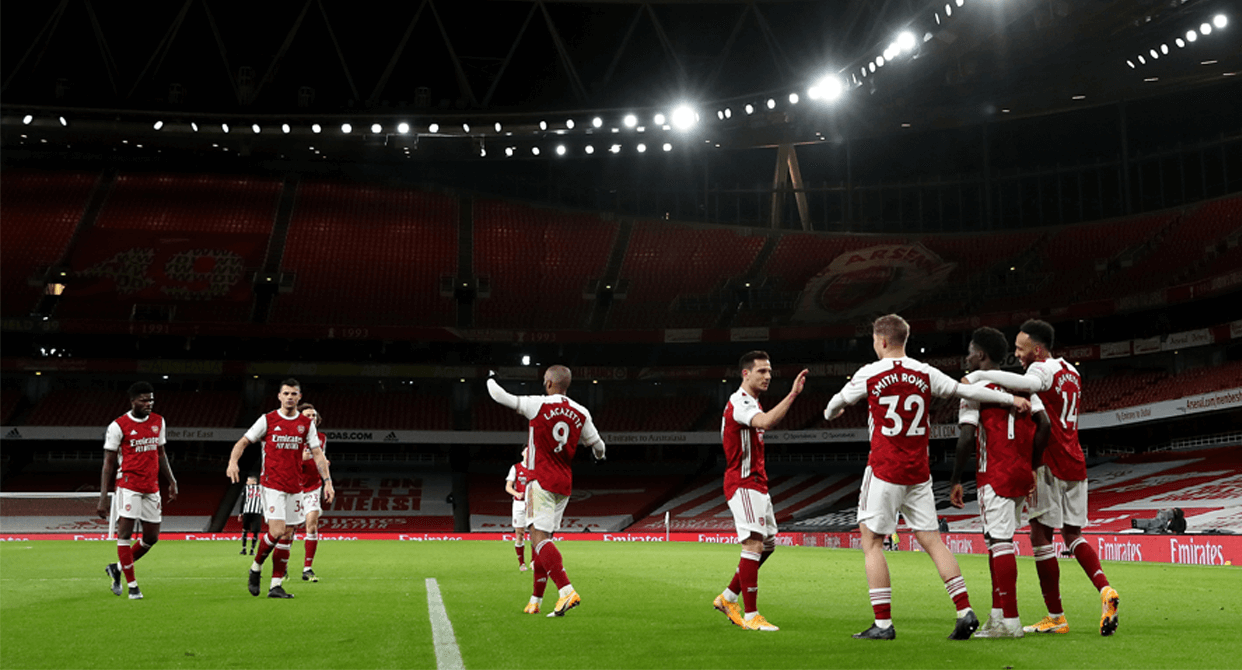 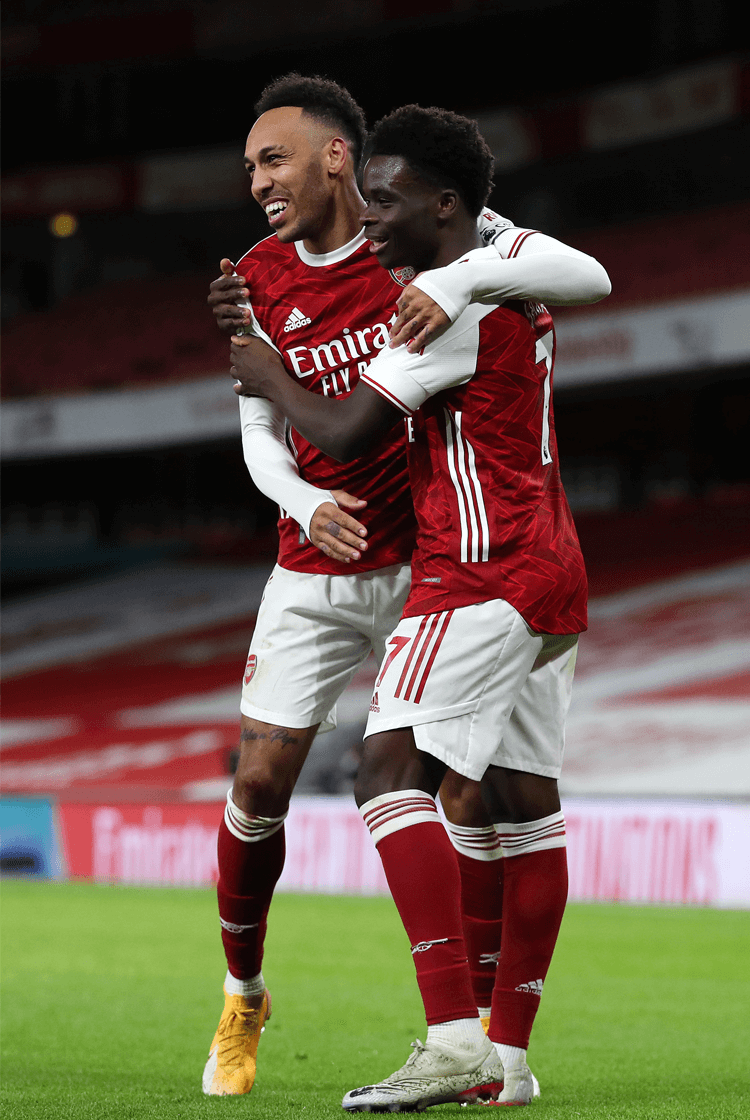 Arsenal continued to revive their season and moved into the Premier League's top 10 when two goals from Pierre-Emerick Aubameyang and another from Bukayo Saka rewarded the extent to which they outplayed Newcastle. Undefeated in six, and having recorded four victories and conceded only once during that same period, they perhaps also demonstrated that Mikel Arteta may yet inspire a challenge for qualification for next season's Europa League. Newcastle are without a win in nine. "I really like the chemistry, cohesion and rhythm the team played with," said Arteta, who also saw the promising Emile Smith Rowe again impress. "I asked them to attack better, have more options in certain areas but without losing the structure that is needed to control Newcastle's good players up front." His opposite number, Steve Bruce, said: "We gave as good as we got and got ourselves some decent opportunities but that little bit of confidence has ebbed away. That happens when you are on a run like we are. The only way it comes back is with a couple of victories." 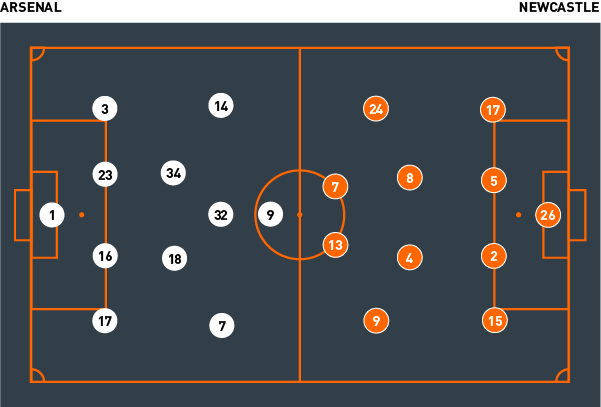 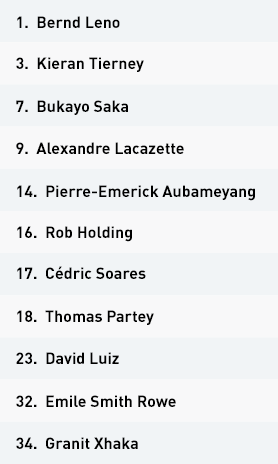 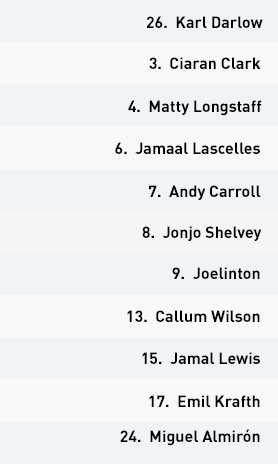 Arsenal were organised by their manager Mikel Arteta into a 4-2-3-1 formation led by Alexandre Lacazette, who was supported by Bukayo Saka, Emile Smith Rowe and Pierre-Emerick Aubameyang. Their visitors, Newcastle, defended with a mid-block via their 4-4-2.

With Arsenal largely dominating possession, Newcastle's front two of Callum Wilson and Andy Carroll were instructed to screen passes into Thomas Partey and Granit Xhaka, but resisted the temptation to press Rob Holding and David Luiz unless they attempted to carry the ball out of central defence. Jonjo Shelvey and Matty Longstaff therefore remained closer to the back four behind them to prioritise movements between the lines from Arsenal's attacking players; if, in theory, doing so reversed the three-on-two that existed against them into a four-on-three in Newcastle's favour, in reality, because of Arsenal's movements and rotations, that was rarely the case.

The hosts regularly prioritised progressing possession in the wide areas of the pitch. Towards the right Cédric Soares, Saka and Smith Rowe regularly changed positions to combine around Joelinton and Jamal Lewis. Saka moved infield, Cédric advanced with width, and the movements and presence of the evasive Smith Rowe unsettled those attempting to defend there; Longstaff, particularly, was guilty of reacting too early, and in doing so left dangrous spaces behind him that Saka then targeted.

Towards the left, Xhaka, Kieran Tierney and Aubameyang offered similar potential. Xhaka adopted a position as a false full-back to contribute to attempts to advance beyond Wilson and Carroll, and in doing so drew Miguel Almirón towards him, giving Aubameyang and Tierney increased space and freedom between the lines and to create two-on-ones against Emil Krafth.


Arsenal demonstrated admirable speed of play during phases of possession and moments of transition. When regains were made they sought to play forwards early, and to offer forward runs across the pitch. Their first two goals, when Partey and Bernd Leno quickly delivered the relevant passes, highlighted exactly that.

On the rare occasions Newcastle attempted to apply a high press, Wilson and Carroll closed down their central defenders, and Shelvey or Longstaff took the ballside central midfielder. With Almirón and Joelinton closing down their opposing full-back, Arsenal regularly had a free midfielder, and therefore beat that press. Arsenal, similarly, complemented vertical passes with blindside runners so that the player receiving possession could execute either a further forward pass or combine with those around him.

Lacazette's movement and link play also posed a consistent threat. He willingly withdrew into a deeper position to receive possession and used the movements of Saka and Smith Rowe as triggers for his – most commonly by moving in the opposite direction when his teammates spun in behind. The Frenchman's intelligence, in offering potential combinations and in his awareness, proved a further strength.

Steve Bruce set Newcastle up into a 4-2-4 formation, in which Jonjo Shelvey and Matty Longstaff featured in central midfield. Their hosts, Arsenal, defended with the same 4-2-3-1 with which they attacked.

Newcastle had little possession and two methods of generating goalscoring chances. The first involved playing directly from their goalkeeper Karl Darlow to Andy Carroll, who was supported by Callum Wilson, Miguel Almirón and Joelinton with runs off of his aerial challenges and into the spaces in behind. Occasional opportunities to shoot at goal followed, but they rarely offered significant potential. The second came on the counter, when they released their front four as early as possible and when they appeared likelier to score.

Arsenal sought to press Newcastle's defenders on the occasions – often after a regain was made and the ball was played backwards – they were in possession. Alexandre Lacazette attempted to force play into one half of the pitch by screening the second central defender and pressuring the one with the ball at his feet. Granit Xhaka advanced to take Jonjo Shelvey, and Thomas Partey remained withdrawn to continue to protect the back four behind him, particularly given the long balls being played.


Even during Newcastle's occasional spells of possession they remained reluctant to attempt to advance through Arsenal's midfield. Additional touches, before playing sideways or backwards passes, were instead favoured.

Beyond that hesitancy, the movements offered ahead of the ball were too often isolated and involved players making a run to receive to feet, and then returning the ball backwards if they had succeeded in doing so. Rotations were essentially non-existent, so Arsenal's sense of balance was preserved.

If Newcastle's full-backs attempted to join attacks they only did so once possession had moved into the attacking half, and while them doing so increased their attacking options, it also left them more vulnerable against counters – such as those with which Arsenal scored their first two goals. Even when longer, diagonal passes were played by Shelvey or Longstaff to Newcastle's front four, that front four found themselves outnumbered in the final third.