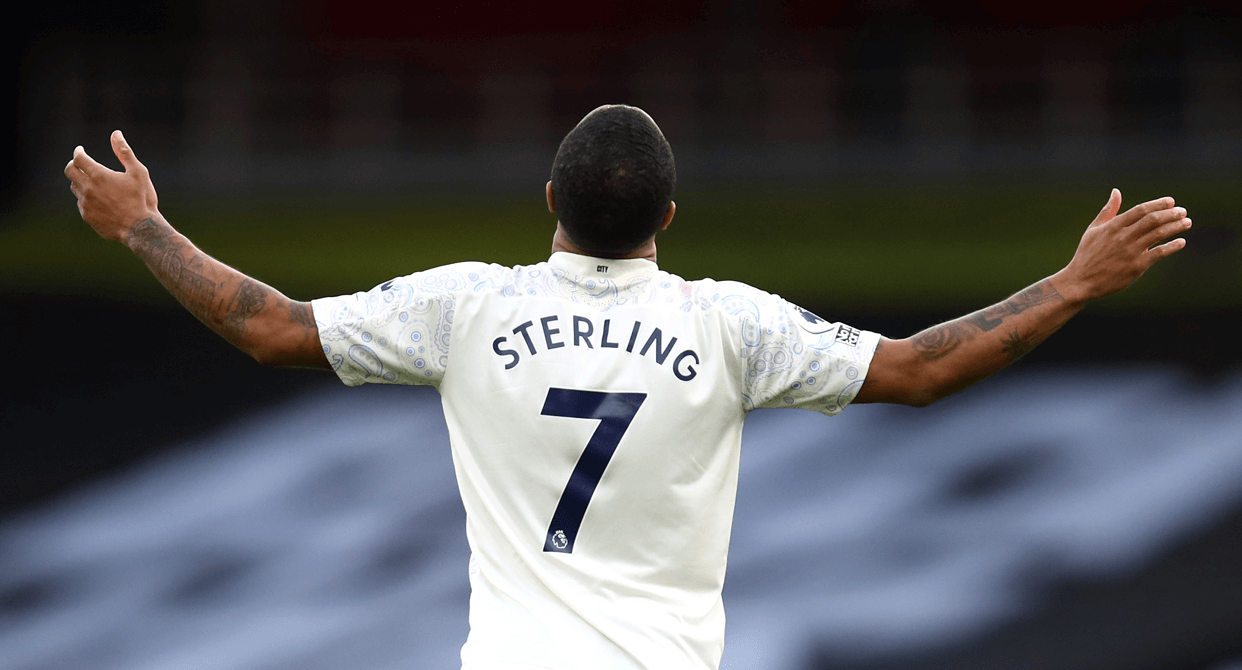 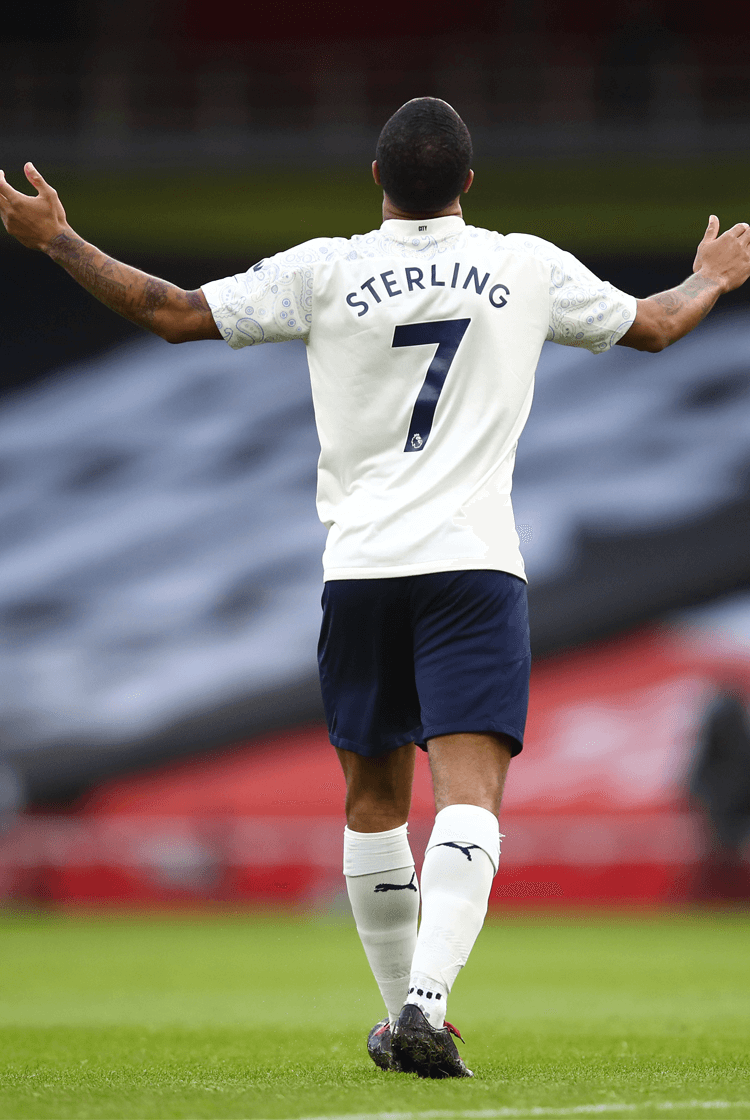 Manchester City extended their winning run to a remarkable 18th match by easing past Arsenal at the Emirates. City led the latest encounter between Pep Guardiola and his former assistant Mikel Arteta from the second minute, through Raheem Sterling's header, and they thereafter left their opponents with little hope of scoring an equaliser. "I'm surprised and impressed and so, when everyone is suffering in this world, all the teams in the league are dropping points, we were consistent over the past two months and I did not expect (that)," said City manager Guardiola, whose team have not dropped a Premier League point since mid-December. "People talk and talk about the record and the victories, but to do this you have to win these types of games many, many times. It is not always about winning by three or four because that is not possible." Arteta said: "The first goal put us in a difficult situation. It was tough. With the formation and the players they use, they are really comfortable." 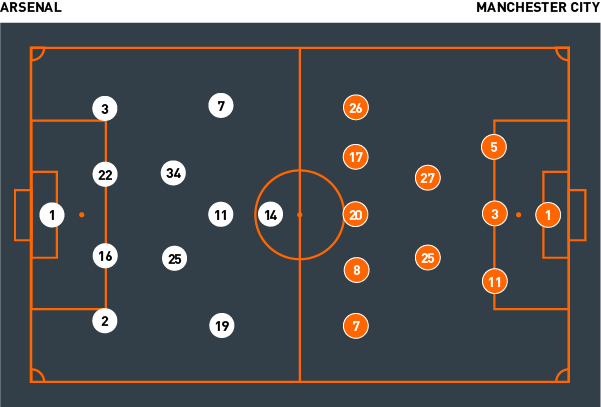 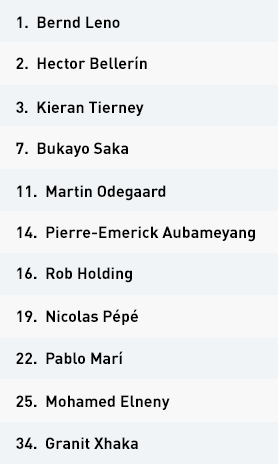 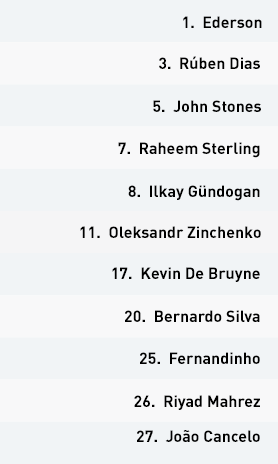 Arsenal were organised into a 4-2-3-1 formation, on this occasion was led by Pierre-Emerick Aubameyang, by their manager Mikel Arteta. Their visitors, Mancester City, defended with a 4-2-4 in which Fernandinho was joined in central midfield by Kevin De Bruyne or Ilkay Gündogan, and sought to press them with aggression and towards their goal.

That press had an advanced starting point initiated by their front four, who also screened passes into midfield. Arsenal attempted to adjust via Granit Xhaka withdrawing into the penalty area, where alongside Bernd Leno, Rob Holding and Pablo Marí he increased their numbers, but City continued to apply that same press, including towards Leno. Their aggression often forced Arsenal into playing longer passes, contributing to them struggling to control possession, but the positioning of their front four in relation to the two central midfielders behind them meant that diagonal passing lanes into Xhaka and Mohamed Elneny existed if they moved to between the lines, which ultimately represented a trap.

When the ball was played into the feet of either midfielder, his opposite number and a wider forward – and often a further ballside attacker – would then pressure him. Throughout the first half several regains were made in midfield, and the presence of four players ahead of those regains gave City significant potential to counter.

In a further attempt to adjust, Bukayo Saka moved into the half-spaces to create an overload against City's midfield, inviting Kieran Tierney to advance from full-back, confronting João Cancelo with whether he should follow Saka or hold his position to prioritise Tierney. City's press became difficult to sustain, so they, in turn, began to retreat into more of a mid-block, encouraging Elneny to move to between Holding and Marí to create a line of three when Arsenal were attempting to build possession. Holding and Marí were then pressed on their outside shoulder by Raheem Sterling and Riyad Mahrez, but Arsenal proved capable of accessing their full-backs via a bounce pass into midfield – one with which they had to be wary against City's defensive traps.


It was the relationships between full-back and wide attacker that Arsenal were determined to capitalise on, largely via two-on-ones against City's full-backs, and because of the advanced positioning of Sterling and Mahrez. Arteta's team regularly attacked with width, and as they progressed possession four players – Aubameyang, Martin Odegaard and the far-side wide attacker and full-back – would attack the penalty area.

City, regardless, defended the crosses that followed very well. The compactness of their back four, and defensive contributions made by Fernandinho and a further central midfielder, regularly succeeded in limiting Arsenal's space.

Manchester City were set up by Pep Guardiola into a 3-2-5 formation in which João Cancelo and Fernandinho featured in central midfield. Their hosts, Arsenal, had periods of defending with both a 4-2-3-1 and 4-4-2; if the latter, via Martin Odegaard advancing to alongside Pierre-Emerick Aubameyang.

City's priority, essentially from kick-off, was to overload the central areas of the pitch and to isolate their opponents in the wide areas, where they relished one-on-ones. The fluidity that existed between Kevin De Bruyne, Bernardo Silva, Ilkay Gündogan, Cancelo and Fernandino troubled Arsenal, and particularly Mohamed Elneny and Granit Xhaka, who were stretched by attempting to nullify the correct opponent at the correct time while not leaving others free to receive.

A similar fluidity existed between the first and second lines of City's structure when they built, which often meant John Stones or Rúben Dias driving out with possession from central defence. Cancelo or Fernandinho, intelligently, adopted positions that occupied the wider player in Arsenal's midfield while a central defender advanced with freedom to receive outside of them.

City regularly succeeded in playing into the feet of their attacking players, and largely because some of those attacking players made runs in behind while the others remained relatively stationary to hold their positions and capitalise on Arsenal's defenders dropping with those making runs. Xhaka and Elneny were regularly being drawn across the pitch, so they moved to take positions immediately in front of Arsenal's back four in an attempt to restrict the passes being played into their attacking opponents.


When they sought to press, Aubameyang attempted to eliminate one half of the pitch with his body position as he closed down the in-possession central defender, and Odegaard prioritised Fernandinho. Bukayo Saka and Nicolas Pépé adopted narrow positions alongside Xhaka and Elneny, but Saka was also often drawn in to mark Cancelo and therefore negate what otherwise would have become a two-on-one in central midfield.

As play progressed, Arsenal's focus increasingly became following their opponents' movements, and to the extent that there were occasions they risked neglecting the ball, inviting Stones or Dias to carry it for 20-to-30 yards and increase their attacking potential. City's dominance of possession wasn't, however, complemented by a ruthlessness in the final third, where moving the ball more quickly could have led to them creating superior goalscoring chances.