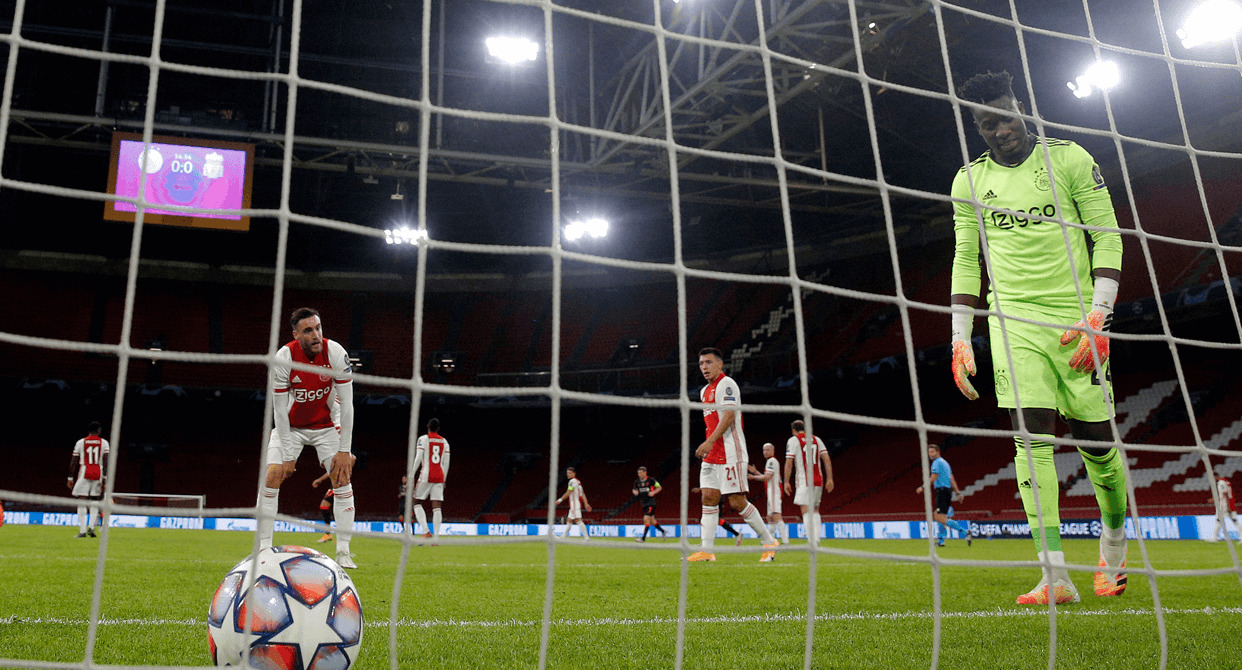 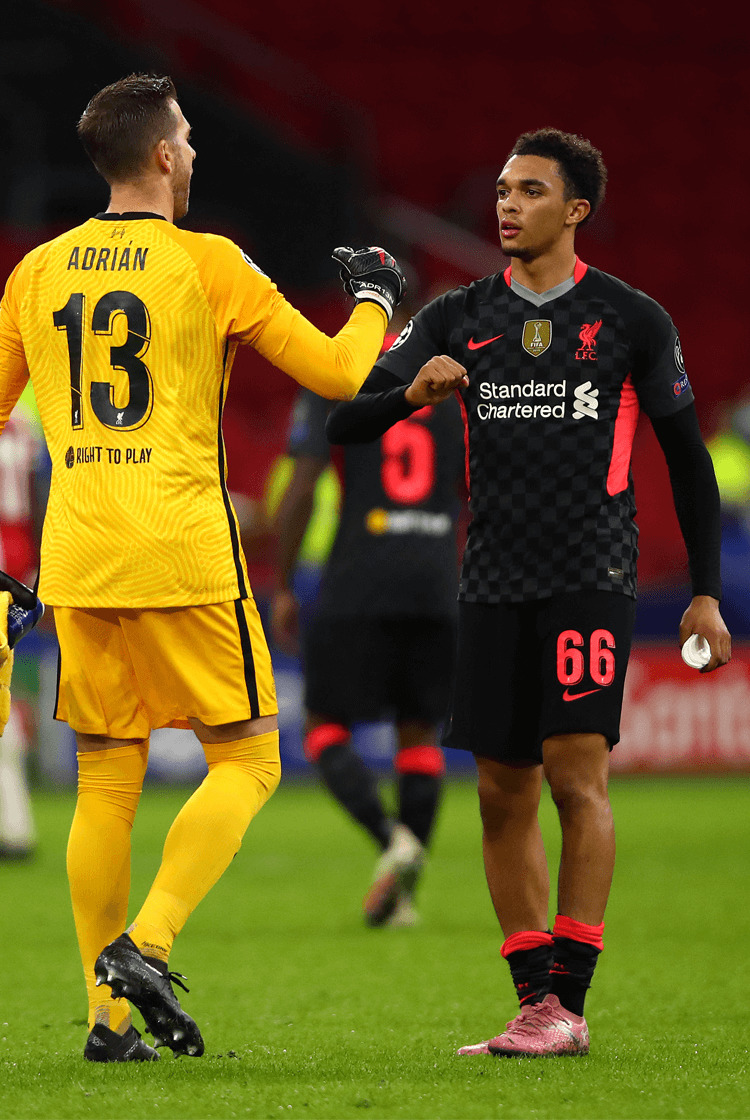 Liverpool made a winning start to their Champions League campaign when an own goal from Nicolás Tagliafico gave them all three points at Ajax. In the absence of the injured Alisson and Virgil van Dijk, and therefore with Adrián in goal and Fabinho and Joe Gomez in central defence, they struggled to impress but took the lead during the first half when Tagliafico turned a cross from Sadio Mané into the goal he was attempting to defend. "It was good enough to win," said Liverpool's manager Jürgen Klopp. "Both teams could play better football. At moments it was wild. The pitch was deep and muddy. Three days ago it looked completely different and in training yesterday it looked different. But we did not take our chances which was a shame. Ajax had a big one which hit the post. But overall I'm happy." His opposite number Erik ten Hag said: "Liverpool were vulnerable. Unfortunately, we didn't make the most of that. We were unlucky. We performed well collectively. We were convincing, but that last one per cent was missing – we didn't score even though we created many chances." 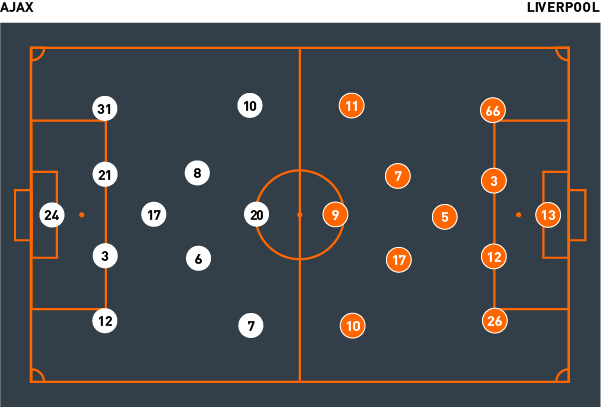 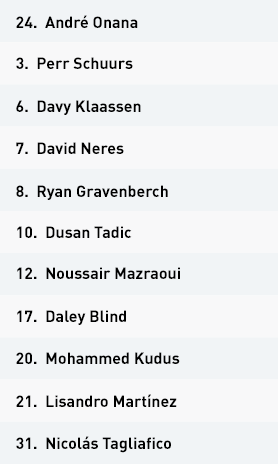 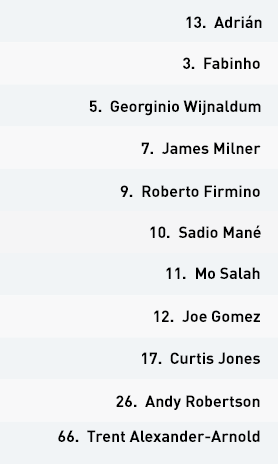 Ajax were organised by their manager Erik ten Hag into a 4-3-3 formation that featured Daley Blind, Davy Klaassen and Ryan Gravenberch in midfield. They encountered visitors also using a 4-3-3.

The hosts sought to build from defence and then play through Liverpool, who used Mo Salah and Sadio Mané to press their central defenders, and Roberto Firmino to screen passes into Blind. Liverpool's midfielders were regularly stretched, because of their attempts to challenge both their opposing numbers and Ajax's full-backs. In the early stages Ajax often succeeded in playing through that midfield; Blind was comfortable moving outside of Firmino's cover shadow to receive possession, and passes played to Klaasen and Gravenberch allowed them to regularly receive free of the attention of Liverpool's midfielders, who responded by adopting narrower positions.

Ajax's midfielders continued to favour positions outside of Liverpool's, and to receive diagonal passes into feet before using the two-on-ones that existed with the advancing full-back behind them against Liverpool's full-backs or retreating wide forwards. When Mohammed Kudus suffered an injury and was replaced by Quincy Promes, Dusan Tadic was instead used as their central attacker, and Promes towards the left.


Ten Hag's front three often attacked with a narrow shape, inside of his advancing full-backs. Tadic also withdrew into midfield to create a four-on-three against Liverpool's, contributing to their ability to access those full-backs in wide positions.

Liverpool later started to defend with a 4-1-4-1, and had a lead to protect. The increased compactness of their midfield reduced Ajax's attacking potential, even if there were still occasions when they advanced into the final third, where Promes and David Neres sought to make penetrative runs in behind Liverpool's defence.

When Ajax succeeded in executing quick combinations, they appeared capable of accessing the spaces that existed, and therefore of creating goalscoring chances. They were too regularly guilty of overplaying, however, and saw Fabinho clear off the line, and a further effort strike the post. Their xG of 1.67 even suggests that they created enough to win.

Liverpool retained Jürgen Klopp's favoured 4-3-3 formation, which on this occasion was built on the less-familiar spine provided in central defence by Fabinho and Joe Gomez, and in midfield by James Milner, Georginio Wijnaldum and Curtis Jones. Their hosts, Ajax, also used a 4-3-3, and a similar defensive strategy.

When Dusan Tadic moved to operate as their central attacker following Mohammed Kudus' injury, he worked to occupy Wijnaldum, the most defensive of Liverpool's three midfielders. Quincy Promes and David Neres, either side of Tadic in Ajax's front three, prioritised pressing central defenders Fabinho and Joe Gomez from the outside, and therefore also using their cover shadow to block passes to Liverpool's full-backs. With their central midfielders free to focus on Milner and Jones, and their full-backs on Liverpool's, the visitors became ineffective on the ball, and to the extent that they often looked lethargic.

Klopp's team rarely penetrated forwards during the first half, and because of inaccurate passes regularly conceded possession. His midfielders too rarely offered the movements that may have troubled Ajax's, leaving Liverpool's defenders with little choice but to target Mo Salah and Sadio Mané and the runs they made in behind, or their feet when they withdrew into deeper positions or into the half-spaces with their backs to goal.


They offered greater potential towards the left, from where Andy Robertson was so willing to advance from full-back, and Mané provided the necessary movements to create space to run in behind or receive to feet. Their efforts often led to low crosses into the penalty area, and their better goalscoring chances, as was demonstrated when they scored the game's only goal following a throw-in.

Jordan Henderson's introduction as a half-time substitute gave Liverpool increased dynamism and intensity in midfield, and contributed to the quality of their play slightly improving. Technical errors, regardless, continued to occur, and led to further turnovers.