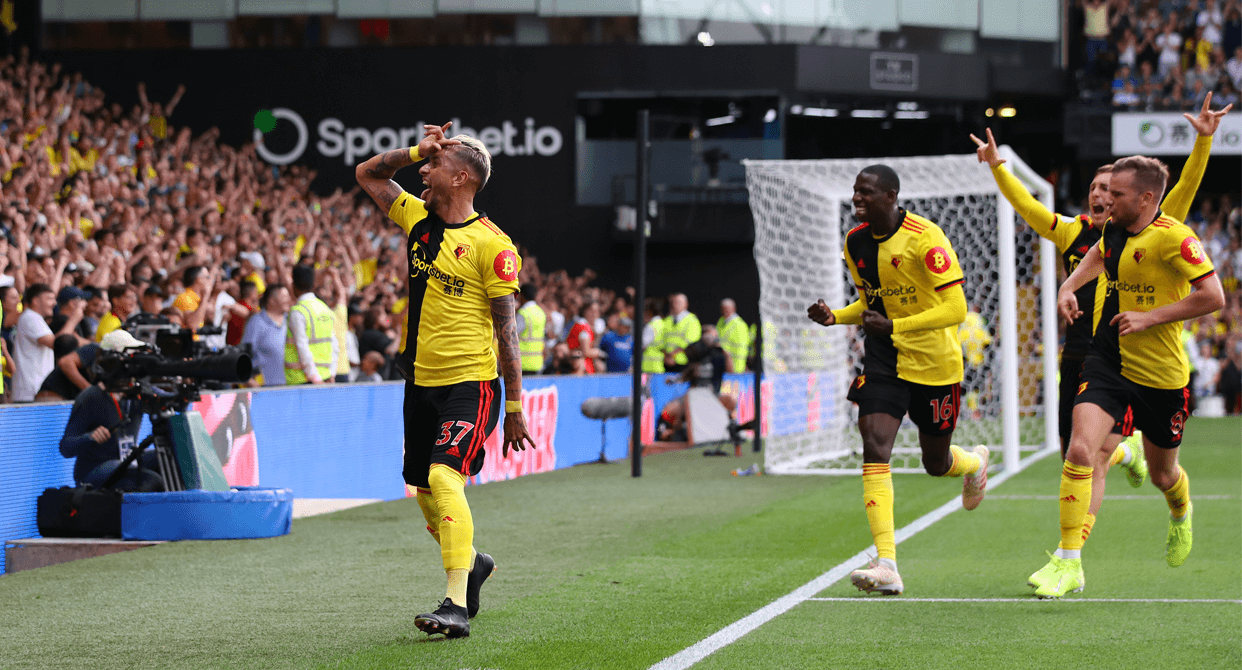 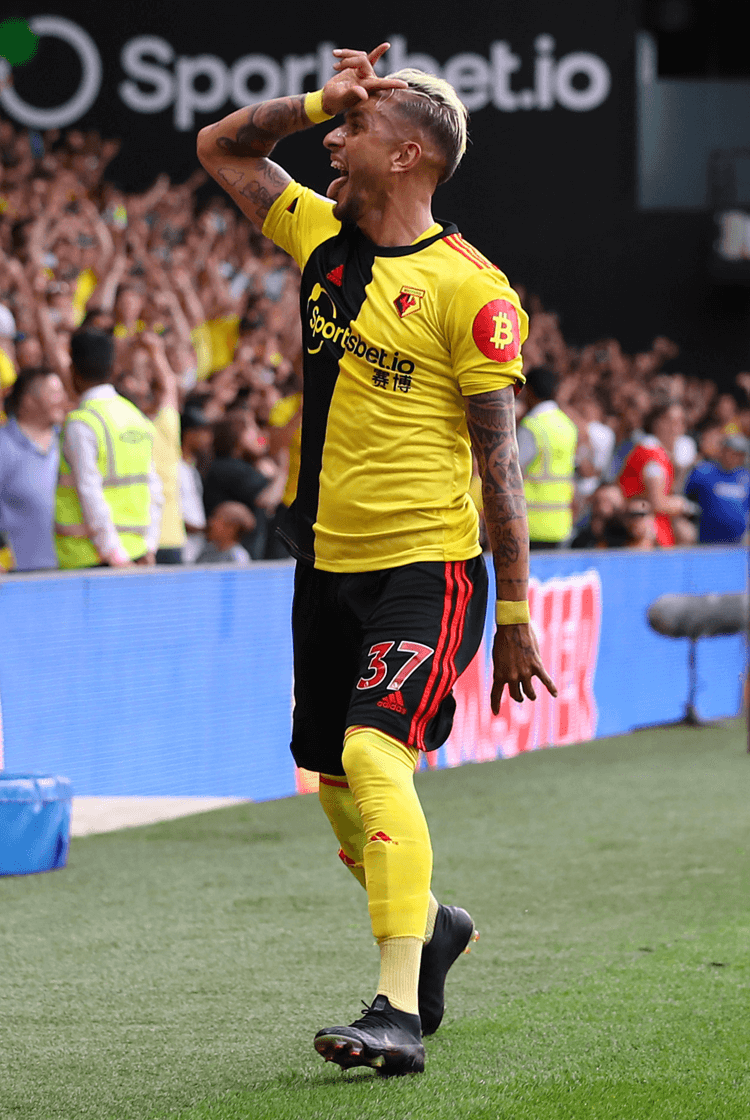 In the first fixture of Quique Sánchez Flores’ second reign as Watford manager, his team produced a significantly improved performance to impressively recover from two goals down to draw with Arsenal. Two first-half finishes from the prolific Pierre-Emerick Aubameyang threatened to undermine the popular Spaniard’s Vicarage Road return, but his team forced Arsenal into their latest defensive error early in the second half, from which Tom Cleverley pulled one back. They recorded 31 shots across the 90 minutes – a club record in the Premier League – and eventually drew level with an 81st-minute penalty from substitute Roberto Pereyra. That secured the hosts a valuable point and, perhaps more relevantly, a much-needed boost of confidence after a difficult start to the season. 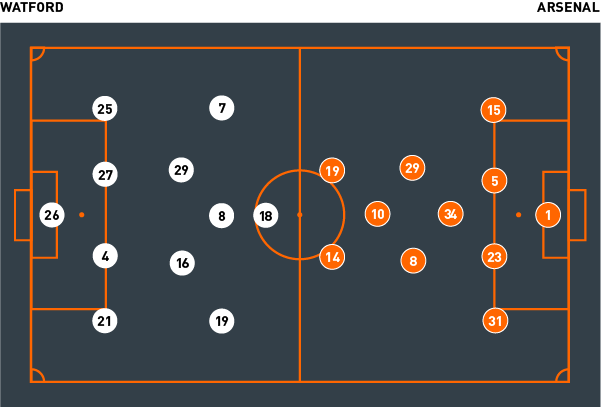 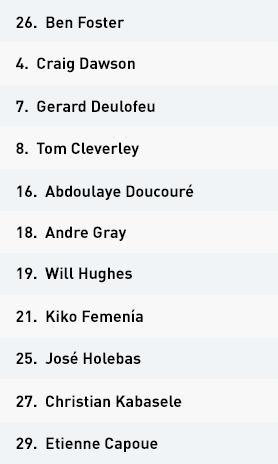 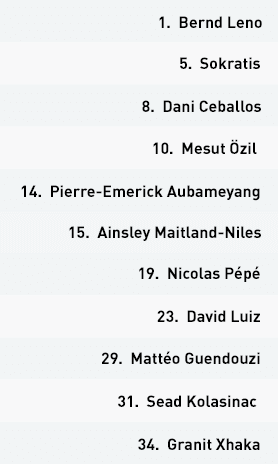 Quique Sánchez Flores reorganised his team into a 4-2-3-1 formation in his first fixture back as Watford manager, having succeeded the sacked Javi Gracia. Abdoulaye Doucouré and Etienne Capoue provided the double pivot behind attacking midfielders Will Hughes, Gerard Deulofeu and Tom Cleverley, with Andre Gray operating as a lone striker.

Where Gracia had previously used his wide midfielders to move inside and operate almost as two central attacking midfielders, his successor used his as inside forwards, creating two-on-ones with attacking full-backs José Holebas and Kiko Femenía against Arsenal’s full-backs – which often worked well against the visitors’ diamond midfield. They created chances from wide areas, often via switches of play, which can be difficult for a diamond midfield to defend against.

Instead of their double pivot playing on the same horizontal line, Capoue and Doucouré were often positioned on the same vertical line, forcing Mesut Özil to press the deeper of the two. From there, a simple pass back to the central defenders opened a passing line in to the other midfielder, beyond Özil. Space would in turn either be created for that midfielder or the full-back on the relevant side to advance and ultimately create the targeted two-on-one. With improved finishing touches, Watford would have secured all three points.


Arsenal used the same four-four-two diamond shape both in and out of possession. Pierre-Emerick Aubameyang and Nicolas Pépé formed the front two, in front of number 10 Özil and defensive midfielder Granit Xhaka. They were inefficient out of possession, neither pressing nor denying space convincingly. Pépé and Aubameyang were respectively instructed to press Christian Kabasele and Craig Dawson, and Özil the deeper of Doucouré and Capoue, but he too often faced a two-on-one against the midfielders.

Similarly, Dani Ceballos and Mattéo Guendouzi started centrally and attempted to disrupt both the second opposing central midfielder and press out to the near-side full-back should they receive possession, but the overload they repeatedly faced encouraged Watford to advance.

As the visitors struggled to retain their lead, Lucas Torreira was brought on to play alongside Xhaka as a second holding midfielder, while Reiss Nelson and Joe Willock joined Pépé to form a line of three behind Aubameyang. This matched Watford’s 4-2-3-1 shape, as the Gunners used a mid-block to defend as Watford sought a winning goal that, despite a number of late chances, never came.

Arsenal were organised by Unai Emery into a four-diamond-two formation, both with and without possession. They attempted to build established possession throughout the first half, when Dani Ceballos and Mattéo Guendouzi would often adopt false full-back positions and draw Watford’s wide midfielders out. This would then create passing lines into advancing full-backs Sead Kolasinac and Ainsley Maitland-Niles.

Hosts Watford recognised this potential threat, so Tom Cleverley and Andre Gray covered the deepest Arsenal line, forcing them into horizontal passes across defence in an attempt to move them before they could advance possession. Emery’s team struggled to penetrate in central areas and therefore looked wide – particularly behind Watford left-back José Holebas, as was seen when Maitland-Niles got in behind to square for Aubameyang to score his second goal.

When the ball was wide, Arsenal attempted to play crosses along the six-yard box or cut-backs to the edge of the area, but it was during transitions – particularly during the first half – that they appeared most threatening. They would look to quickly play to Özil, who in turn attempted to find the forward runs of Pépé and Aubameyang.

They also attempted to play out from defence against an aggressive press, but were guilty of taking too long on the ball and waiting for the ball to run across their body to receive when pressure was coming from that same direction. This reduced the angle into which they were able to play, however, and contributed to them conceding possession in dangerous areas – exactly as happened when Cleverley scored Watford’s first.

Watford had two approaches out of possession. They used an aggressive press at Arsenal goal-kicks, or operated in a 4-4-2 mid-block if the Gunners had established possession. If that press left the Arsenal full-backs free, it was deliberate – by encouraging the ball out to the touchline, they could trap Maitland-Niles and Kolasinac and reduce the angle into which they were able to play. This contributed to turnovers in Arsenal’s half, through regains or by forcing them to play wayward passes.

In the mid-block phases, Quique Sánchez Flores’ team used a 4-4-2 in which Tom Cleverley joined Andre Gray in a front two and Gerard Deulofeu and Will Hughes tucked in alongside central midfielders Abdoulaye Doucouré and Etienne Capoue. They also waited for triggers before again committing to a higher press – slow, horizontal passes and touches that took the ball-carrier back towards his own goal. They were disciplined in waiting for these opportunities, and the presence of Doucouré and Capoue in central areas made Arsenal’s build-up relatively predictable because of their limited options. In the end, the visitors looked fortunate to leave with a point despite having led 2-0.