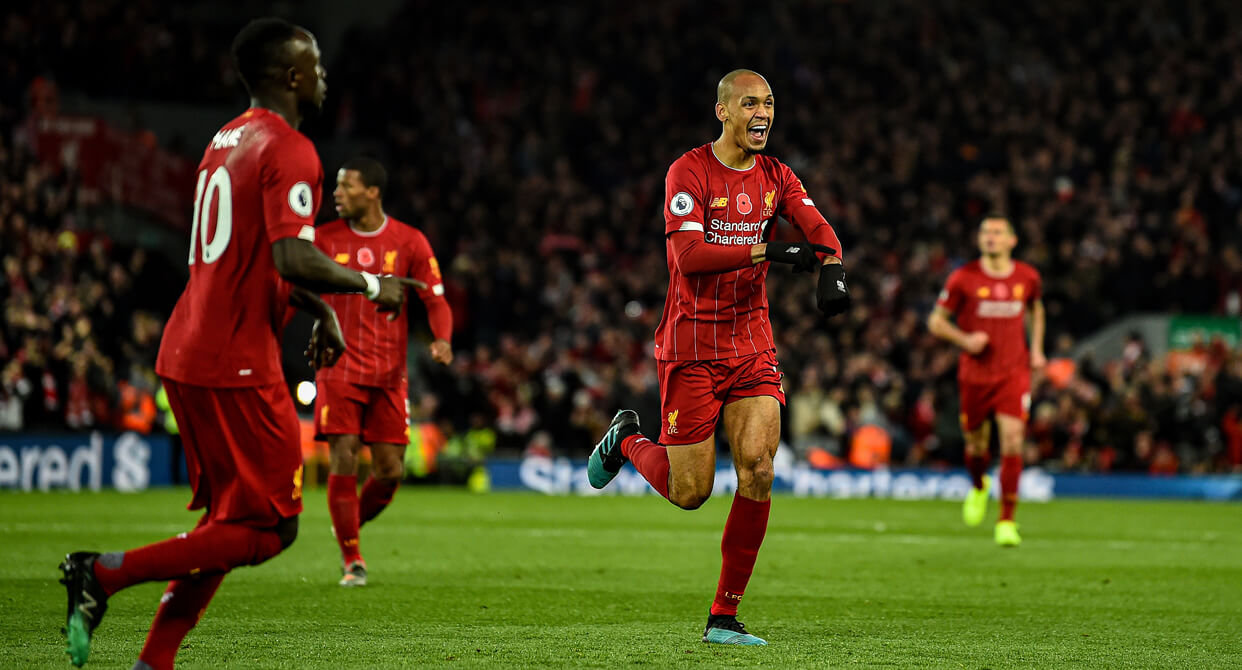 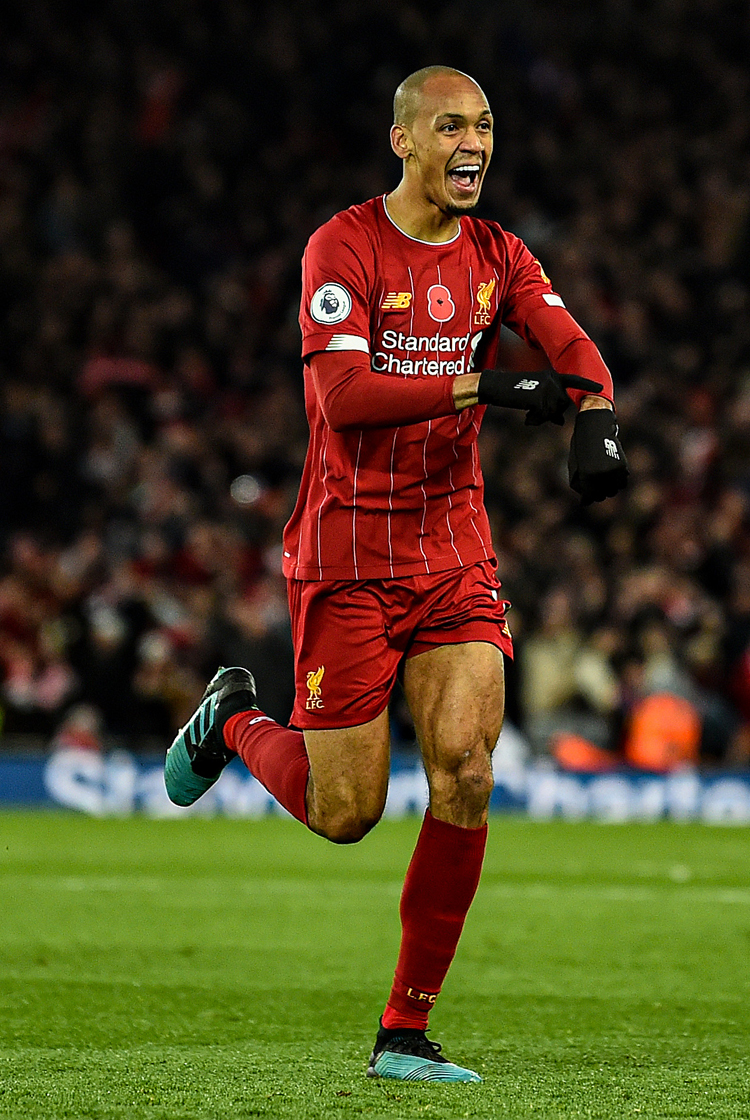 Liverpool struck a potentially decisive blow in their quest for a first Premier League title with this eventful victory over champions Manchester City at Anfield. Pep Guardiola’s visitors had started the better when their seemingly compelling claims for a penalty, after the ball struck the arm of Trent Alexander-Arnold, were denied by both referee Michael Oliver and the Video Assistant Referee. Within 30 seconds Fabinho had hammered a shot past reserve City goalkeeper Claudio Bravo to put the hosts ahead – and Jürgen Klopp’s team soon doubled their advantage when Mo Salah headed in at the end of a sweeping counter-attack featuring both full-backs. The visitors – most notably Sergio Agüero, who has played 782 minutes at Anfield without scoring – had their chances but Sadio Mané headed Liverpool’s third early in the second half and, despite a late rally after Bernardo Silva’s 78th-minute finish, City failed to avoid their third league defeat of the season. The hosts lead Leicester City and Chelsea by eight points from first place; City are a further point back in fourth. 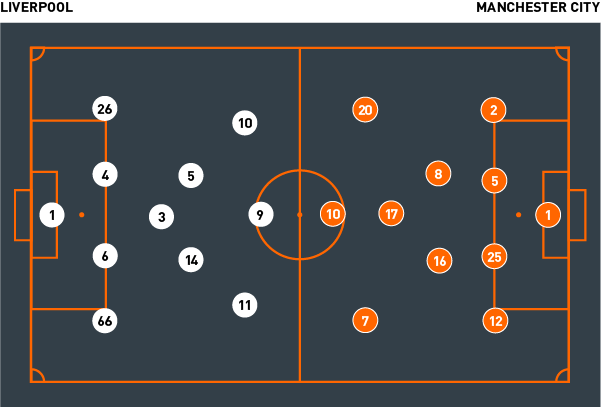 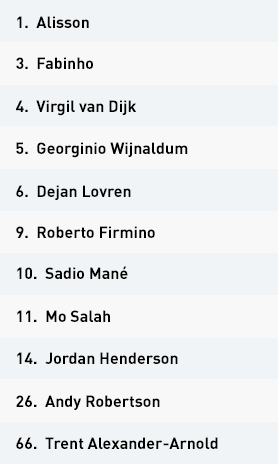 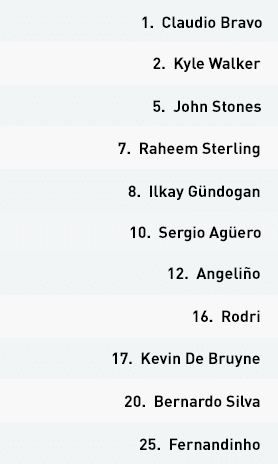 Jürgen Klopp set Liverpool up in a 4-3-3 formation, with Fabinho, Jordan Henderson and Georginio Wijnaldum as a midfield three behind the usual attacking trio of Sadio Mané, Roberto Firmino and Mo Salah. They looked to play at a fast tempo and to draw Manchester City into certain areas of the pitch before exploiting the free spaces elsewhere. When playing out, they were able to tempt between five and six City players into the defensive third, before then playing longer passes to their forwards.

They used Henderson particularly intelligently in this strategy, recognising that Rodri and Ilkay Gündogan would lock on to Fabinho and Wijnaldum as Kevin De Bruyne and Sergio Agüero pressed high. Henderson would thus move between the lines and support the wide attacker the ball had been clipped into, from where he could collect the second ball and continue the attack. The captain was frequently the most attack-minded of Liverpool’s three midfielders, and would look to make penetrative runs beyond their attack, particularly if Salah or Firmino had withdrawn towards the ball.

Liverpool’s switches of play were also a key element of their play – either gradually, utilising shorter, diagonal passes to advance while City were sitting off, or through longer, diagonal passes from out wide or from the half-spaces. The wide switch, as seen from Trent Alexander-Arnold to Andy Robertson in the build-up to Liverpool’s second goal, tended to remain in front of City's defensive line, and was designed to exploit the weak side, and to create crossing opportunities.

The switch from the half-space involved greater depth and was designed not only to exploit the weak side, but also to penetrate beyond the defensive line. These were harder to execute and didn’t create much success for the hosts, but they regardless led to the counter-pressing opportunities Liverpool relish. Perhaps unsurprisingly, they coped much better with them than their opponents.


Manchester City adopted a 4-4-2 shape out of possession, with Raheem Sterling and Bernardo Silva dropping in alongside Gündogan and Rodri to create a midfield line of four, behind the advanced De Bruyne and Aguero. They initially tried to press Liverpool high and would attempt to use De Bruyne and Agüero to restrict access to Fabinho, but also to affect Virgil van Dijk, Dejan Lovren and Alisson. Silva and Sterling moved out to press Liverpool's full-backs, while Gündogan and Rodri tracked Wijnaldum and Henderson.

When Liverpool had established possession and City fell into closer to a mid-block, the main objective was to show Liverpool outside as much as possible. When the central midfielders pressed Liverpool’s midfielders they would direct their run at the inside shoulder to try and block off central passes and to encourage the pass out wide. Once out wide, City would then attempt to trap the hosts against the touchline.

As play progressed City’s out-of-possession work became disjointed, and Liverpool were regularly able to bypass the first line of the press with ease. The issue was one of compactness as a team; the front line moved out to press the central defenders but the midfield line did not move with them. Too often this allowed the Liverpool midfielders to receive, turn and advance, and without facing any pressure.

Pep Guardiola set Manchester City up with their customary three midfielders and three attackers, but they mostly operated in a 4-2-3-1 formation, rather than their more familiar 4-3-3. Rodri and Ilkay Gündogan operated as a double pivot, with Kevin De Bruyne in an advanced central role ahead of them; Raheem Sterling and Bernardo Silva played either side of him and behind lone striker Sergio Agüero.

The visitors were forced to cope with intense pressure as they attempted to build, and struggled to find their usual rhythm. De Bruyne frequently looked to receive between the lines, often basing his movement off of Agüero. When the forward looked to stretch Liverpool's defence by running in behind, De Bruyne could use the space between the lines; if he dropped towards the ball then De Bruyne could make penetrative runs in behind.

City recognised that the central areas were being carefully protected, and therefore sought to exploit those out wide. Rodri and Gündogan remained deeper in central areas, which invited full-backs Kyle Walker and Angelino to adopt more advanced roles. The workrate of Liverpool’s players regardless meant that the wide areas were not easy to exploit, and the presence of Van Dijk, Lovren and Alisson in the penalty area meant that aerial crosses were unlikely to particularly threaten.

As a consequence City looked for low crossing options or cut-backs, to create shooting opportunities. They moved the ball wide to a full-back or wide attacker, who would then look to play inside to a midfielder. The pass inside would be coupled with a blindside, diagonal run to advance the attack, but the subsequent control or delivery was often just short of what was needed to create clear chances.

Liverpool set up in their usual 4-3-3 shape out of possession, with Roberto Firmino, Mo Salah and Sadio Mané leading the line from the front. They looked to apply intense pressure on City as they built, and thus to rush them into early, longer passes into wide areas they could then close down through a combination of wide attacker, outside central midfielder and full-back. If the intense press was broken simply through a numerical superiority, the front three would then withdraw into more of a mid-block, and wait for the next trigger.

The hosts were eager to act quickly on their pressing triggers – sideways or backwards passes – throughout. As soon as they identified the trigger and the first individual initiated the press, the others were quick to join him and force play back towards City's goal. Again, the intensity here caused City problems, and ensured that they couldn’t get into their rhythm.

Liverpool's shape increasingly resembled a 4-4-2 as play progressed, through Mané withdrawing to the right side of midfield. This allowed them to defend wide areas with increased numbers, and to ensure that City couldn’t overload their full-backs. In transition Klopp's team utilised a ball-oriented counter-press; the nearest players looked to ensure that the new ball-carrier could neither play forwards nor establish control. As they did so, the other Liverpool players were quick to get back into position, and to restrict the possibility of a counter-attack.