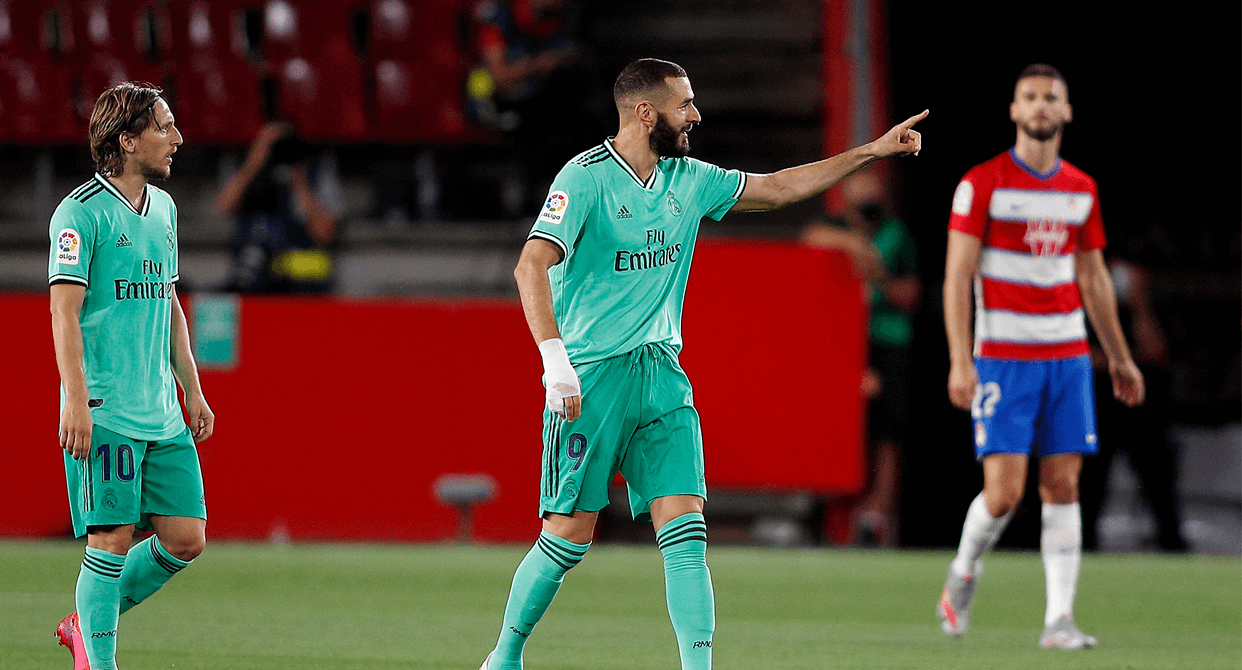 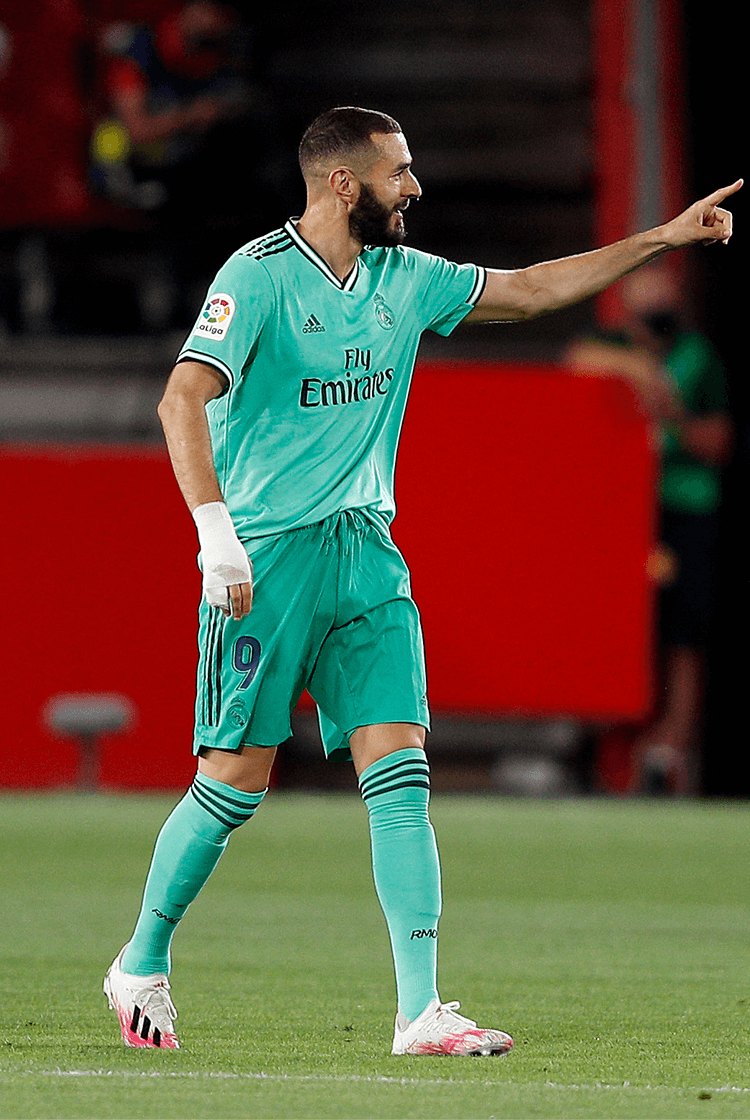 Real Madrid moved to within one victory of winning La Liga after victory at Granada. Goals from Frenchmen Ferland Mendy and Karim Benzema, before Darwin Machís' second-half finish, secured all three points for their French manager Zinedine Zidane, leaving them four clear of their rivals Barcelona with only two remaining leagure fixtures. That Real have a superior head-to-head record over Barca means that they require only two points from their coming fixtures with Villarreal and Leganes to secure the Spanish title.  "We have to be happy and rest up for (Villarreal on) Thursday," said Zidane after their ninth successive win since the resumption of the Spanish football calendar. "We will be back training on Tuesday and we will be back on the pitch on Thursday. The final minutes were tough. Granada made us defend a lot in the second half." 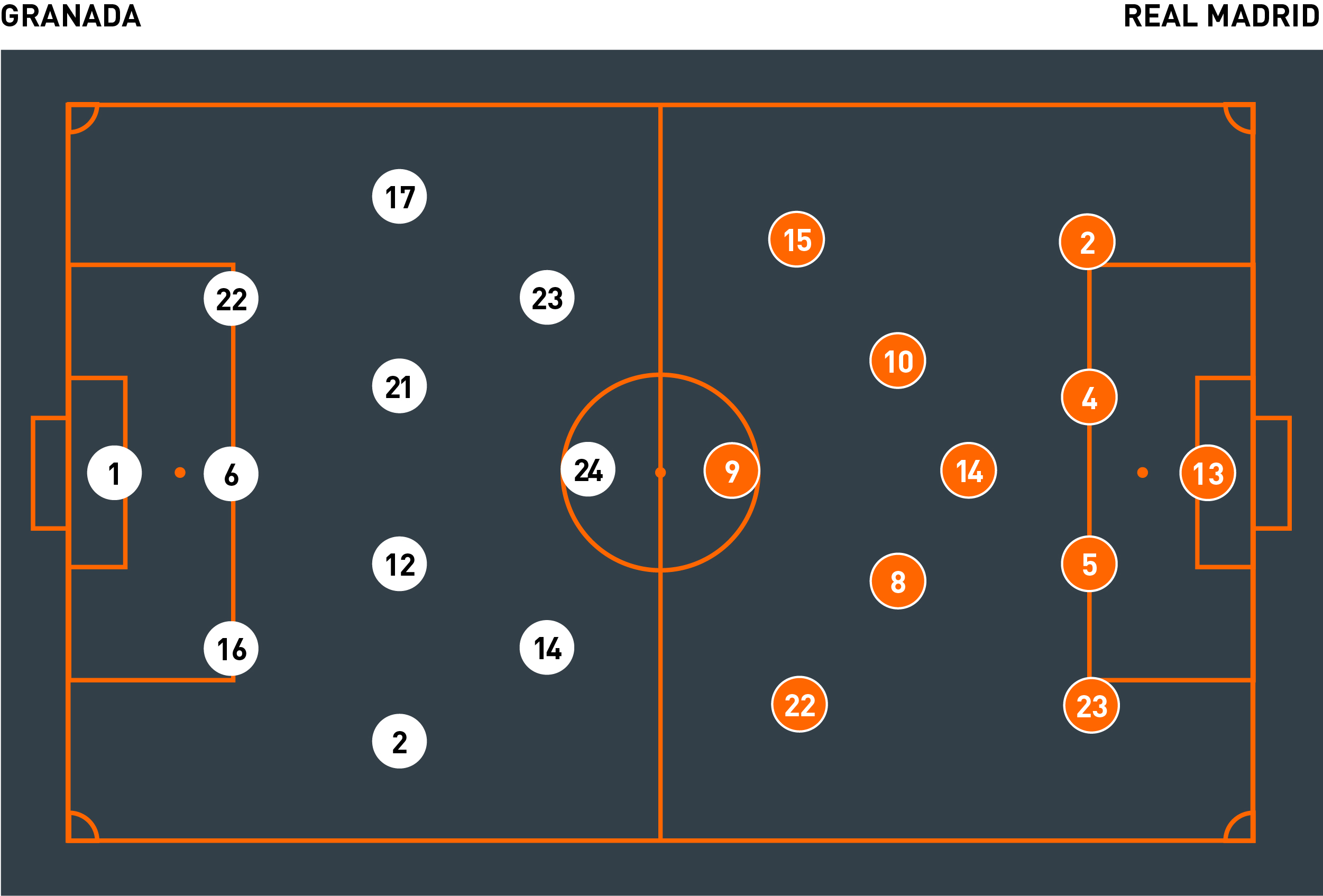 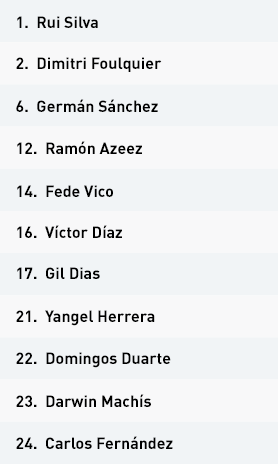 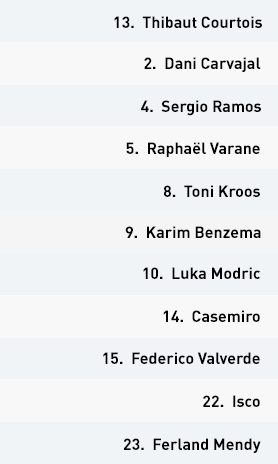 Granada coach Diego Martínez set his team up in a 3-4-3 formation, against the 4-1-4-1 Real Madrid pressed with. Granada had an incredibly underwhelming first half, barely troubling Real in any way.

The hosts didn't retain the ball for long enough to push their wide attackers forward and move their wing-backs into advanced positions, so they ended up simply clipping passes in behind Real's defence for Carlos Fernández to chase, but this unsurprisingly brought little success. Granada occasionally attempted to launch counter-attacks but, again, Fernández was too isolated and Real were able to negate these.

Granada’s goal – scored early in the second half after Real were already leading 2-0 – came from a counter-attack following an uncharacteristic error from Casemiro. The difference between this counter and their previous ones surrounded where possession was regained. The hosts largely won possession deep inside their own half and therefore had a long distance to travel to reach Real's goal, but on this occasion the transition came as a result of pressing from behind and the ball was turned over on the halfway line, when they still had numerous players in advanced positions.


Towards the end of the first half, Granada had switched to a 4-2-3-1; moving a player from their defence and into midfield provided them with an increased presence in advanced areas. Real also reduced the tempo of their efforts without the ball when they were 2-0 up, and the lengthier time Granada had on the ball invited them to construct attacks with greater potential.

Real pressed Granada with a man-oriented approach at goal-kicks but opted for more of a mid-block if the home side had established possession. Their high press involved Casemiro picking up whichever opponent was occupying the central attacking midfield role, and Karim Benzema and Luka Modric pressing their central defenders in an attempt to force play towards a full-back. As the ball travelled to the relevant full-back, the ball-side wide midfielder closed them down while Toni Kroos and the far-side wide attacker prioritised the double pivot in midfield.

The hosts switched between stationing their wide attackers outside of Real's full-back and in the half-space; a key difference in their improvement in the second half was the willingness of those players to make penetrative runs in behind Real's defence. This provided both an option to progress beyond their defence and a way of stretching the visitors’ defence and creating spaces between the lines for passes to feet. Those vertical passes into the half-spaces were designed to link with the run of an advancing full-back and another player further forwards, but these combinations rarely connected, and Granada struggled to break their opponents down.

Real Madrid were organised by their manager Zinedine Zidane into a loose and fluid 4-3-3 formation led by the front three of Federico Valverde, Isco and Karim Benzema. Granada initially used a 5-2-3 to press their visitors.

Real dominated the ball during the first half and regularly adopted a specific positional structure involving Toni Kroos moving into the left-half space so that Ferland Mendy could advance from left-back, Modric moving into an attacking midfield role, and Isco and Valverde moving inside to play more centrally. As was seen for their opening goal, Mendy was regularly able to contribute to attacks during the first half.

Granada sough to press their opponents high up the pitch, but their central midfielders Ramón Azeez and Yangel Herrera were consistently overloaded and therefore overrun, regardless of whether they applied their press from their 5-2-3 or when they retreated into a 5-4-1 mid-block. Through Kroos moving into the half-spaces or a deeper position, Granada's attempts to close him down were tested because of the risk of creating passing lanes to his teammates or beyond their midfield.

The positioning of Real's players between the lines was particularly influential. They succeeded in forming a box around Granada's midfield two, which encouraged them to progress possession with ease. Complementing Real's positional superiority in the midfield third was the fluidity of the movements they offered; their rotations – both vertical and horizontal, and often led by Benzema – disorganised Granada's defence, and created spaces through which Real could advance.

Real's midfield also drifted towards one side of the pitch, so that their more advanced players could adopt positions on the blindside of their opponents and the point of their attack could be switched. Even when the hosts reorganised into a 4-4-2 mid-block, that midfield overload remained consistent. Granada were regardless able to press high in a 4-2-3-1 that gave them an additional number in higher phases, and meant that their defence became more compact, and that they therefore had more control, to the extent that Real struggled to create the same number of goalscoring chances.