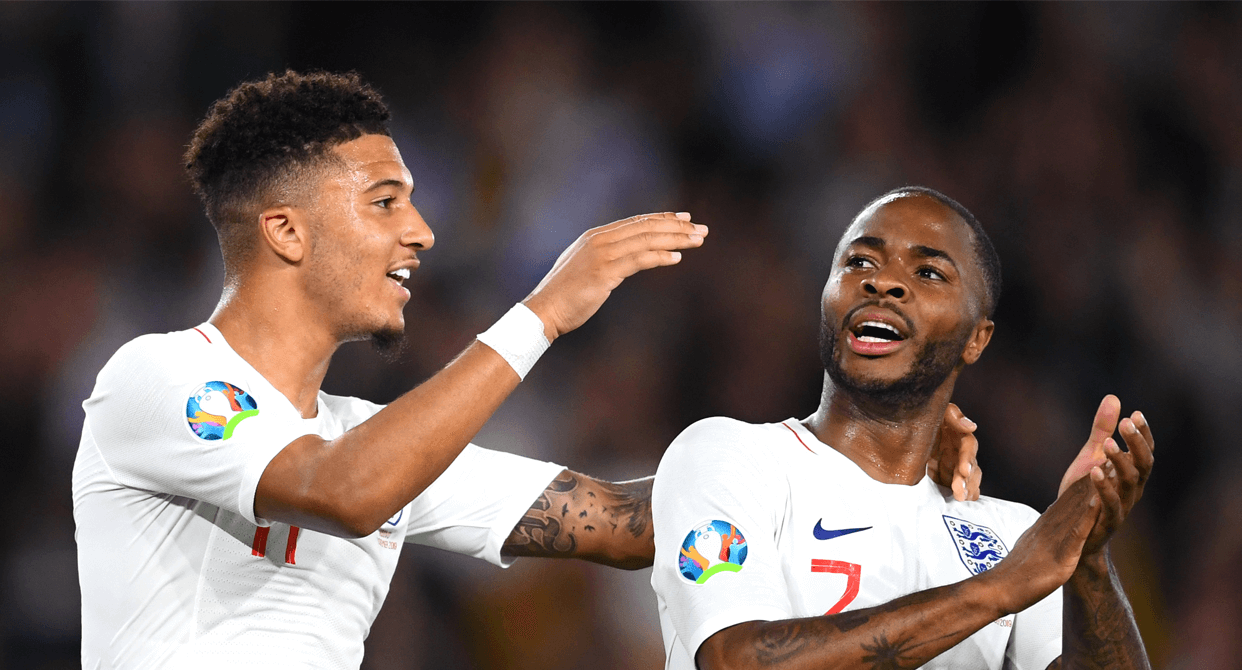 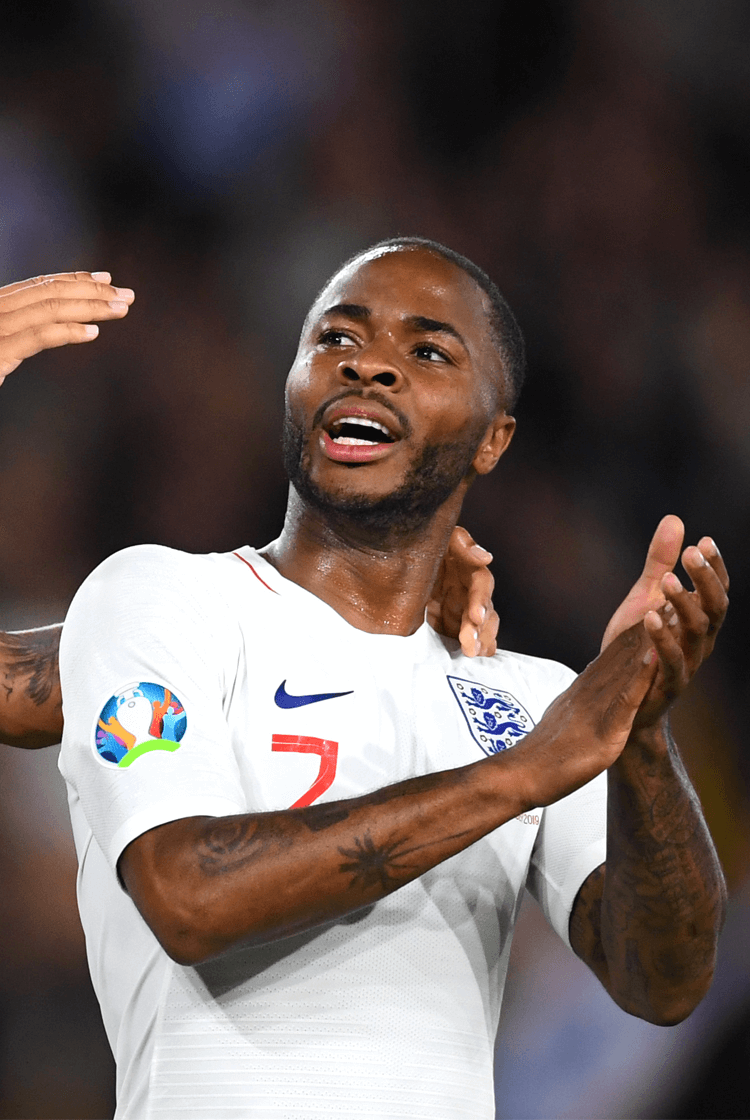 England preserved their winning start to Euro 2020 qualification with a 5-3 victory over an impressive Kosovo at St Mary’s. A Michael Keane defensive error gifted the visitors’ Valon Berisha the opening goal inside the first minute, but Kosovo continued to play expansively and Raheem Sterling, Harry Kane and Jadon Sancho were all able to take advantage as the hosts opened up a commanding 5-1 half-time lead. Kosovo remained true to the principles that had ensured they racked up 15 games unbeaten ahead of this fixture, and a second Berisha strike followed by a Vedat Muriqi penalty reduced the deficit before Kane had his own spot-kick saved by on-loan Nottingham Forest goalkeeper Ari Muric. England held on for the win that takes them three points ahead of second-placed Czech Republic with a game in hand. 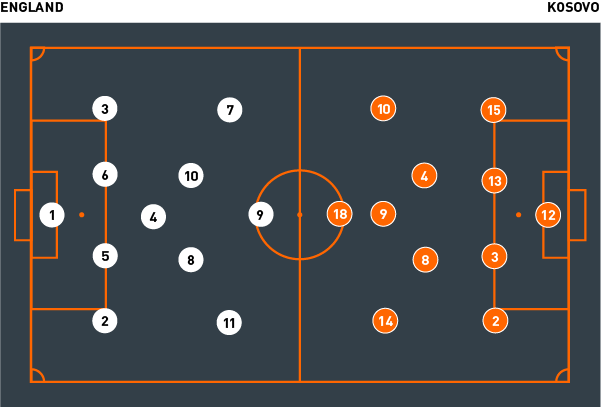 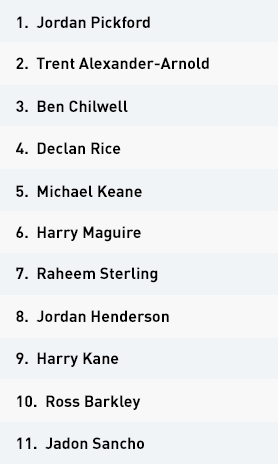 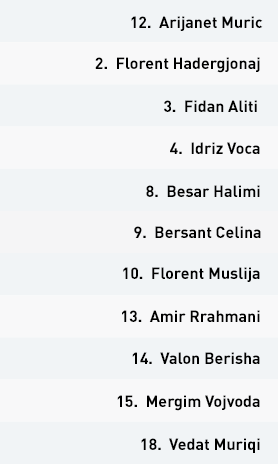 Gareth Southgate set England up in the same 4-3-3 formation they used in defeating Bulgaria, with the manager replacing full-backs Kieran Trippier and Danny Rose with Trent Alexander-Arnold and Ben Chilwell. Marcus Rashford stepped out for Jadon Sancho, who played on the right of the front three with Raheem Sterling moving to the left. Even after unexpectedly falling behind inside the opening minute, England swiftly assumed control of play and recovered to take the lead against opponents who pressed with greater aggression than the others they have encountered so far in Group A.

The hosts were often deprived of time and space to receive and forced to play at a high tempo. As a result, however, Kosovo struggled to protect the spaces they vacated to apply that aggressive press, which contributed to the opportunities presented to Sterling and Sancho, both of whom had the beating of their opposing defenders.

England also advanced possession through the positioning of their midfielders; single pivot Declan Rice often dropped between centre-backs Harry Maguire and Michael Keane, tempting his marker to follow him and create space behind. Jordan Henderson also moved into a false full-back position, as he does at Liverpool, to free up Alexander-Arnold to advance and create a two-on-one with Sancho against Kosovo left-back Florent Hadergjonaj.

Even in those periods of established possession, it was during transitions that England posed their greatest threat. Kosovo committed numbers forward in pursuit of at least a draw, so Southgate’s team capitalised on the pace and quality of Sancho and Sterling to exploit the spaces the visitors’ advancing full-backs left. England’s midfielders were also aware of the need to play forwards quickly in order to take full advantage of these opportunities – which they did in building such a strong half-time lead.


Kosovo used a 4-2-3-1 out of possession, built on the midfield double pivot provided by Idriz Voca and Besar Halimi. They attempted to apply an aggressive press to disrupt the England build-ups in their early stages, led by lone striker Vedat Muriqi positioning himself close to one of England’s central defenders to encourage play in the other direction.

When they chose not to press with the same aggression, they dropped into a mid-low block and a 4-4-2 in an attempt to restrict penetrations by increasing numbers in central areas and prevent passes in to Harry Kane’s feet. Number 10 Bersant Celina joined Muriqi in a front two, with the wide attackers withdrawing into a midfield line of four. From a position of being compact and organised, however, Kosovo were always waiting for a trigger to again engage in their high press against a team not used to being quite so harassed by their other group opponents.

Kosovo manager Bernard Challandes opted for a 4-2-3-1 structure when his team was in possession, with his three central midfielders – Besar Halimi, Idriz Voca and Bersant Celina – regularly rotating in a very fluid set-up. Unusually for one of England’s group opponents, they attempted to play expansively and use those midfielders to drop towards possession in an attempt to advance their full-backs wherever possible.

Halimi withdrew furthest, often playing between the two central defenders to help carry the ball out from the back. With Jadon Sancho looking to press left-sided central defender Fidan Aliti, left-back Florent Hadergjonaj advanced to play alongside left winger Valon Berisha, who often moved inside. To avoid exposing Trent Alexander-Arnold against a two-on-one, Jordan Henderson was forced into deeper territory, inviting Celina to move into the space vacated and become the free man for Kosovo to play through.

Wide attackers Berisha and Florent Muslija often played inside, allowing their full-backs to move high and wide. In fact, as they fell behind and the first half progressed, Kosovo at times attacked with eight or nine players towards the final third, leaving them at risk of being countered – as they subsequently often were. Even as they enjoyed greater periods of possession they struggled to create clear chances; their three goals owed to transitional moments and a penalty rather than their tactical set-up. Their approach often surrounded the use of their full-backs and wider attackers in wider areas; oddly, even though Kosovo scored three times, England’s back four largely defended the penalty area well.


When out of possession, England used a 4-3-3 to press high, and a 4-1-4-1 mid-block when dropping off. When they pressed high they tried to be man-focused, led by Harry Kane and either Sterling or Sancho pressing the central defender in possession, with the other wide attacker preparing to press the full-back.

The hosts sought to play on the front foot defensively, through Declan Rice, Harry Maguire and Michael Keane stepping in front of their opponents to win possession when Kosovo played to feet. When in the mid-block phases they tried to encourage play out wide and then suffocate the ball-carrier by surrounding him. This could have left England at risk elsewhere if Kosovo managed to evade that pressure, although this rarely happened.

When adopting their 4-1-4-1, Sancho and Sterling would tuck in alongside Jordan Henderson and Ross Barkley, and then press their opposing full-back if they received possession. England also consistently protected the central areas when Kosovo attempted to advance and move inside, regularly blocking their route to goal. As suggested already, it was as a result of individual errors rather than any structural weaknesses that the hosts conceded three goals. The three points, after a devastating counter-attacking display in the first half, were never really in doubt.