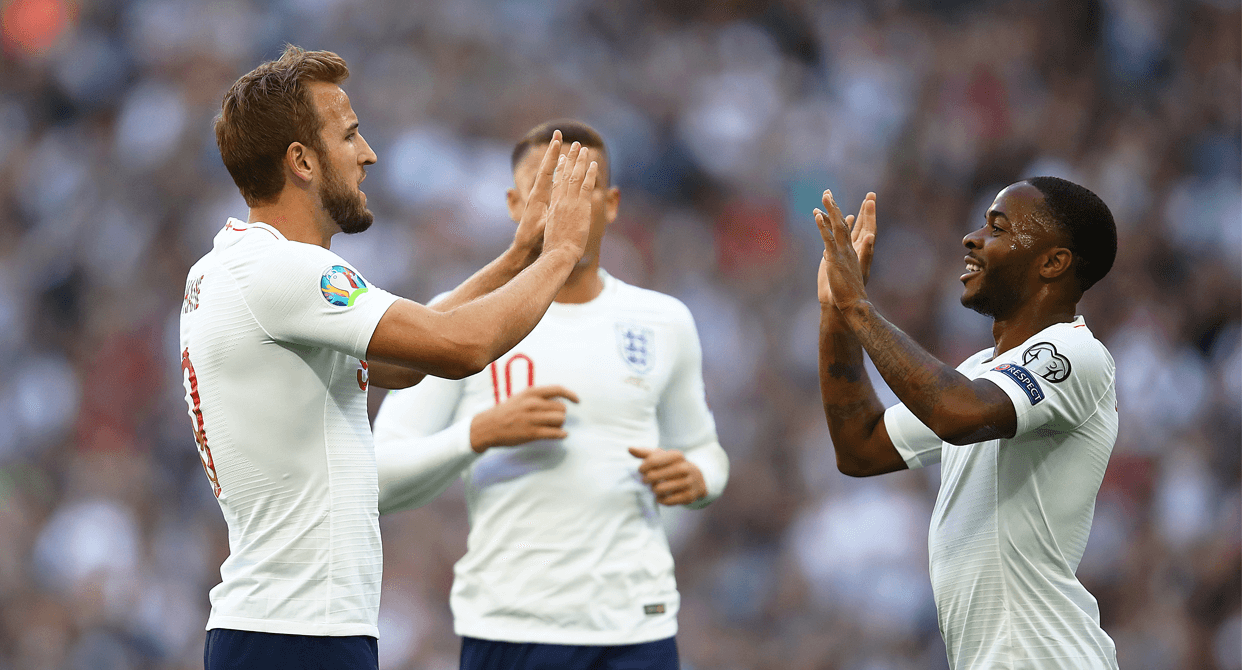 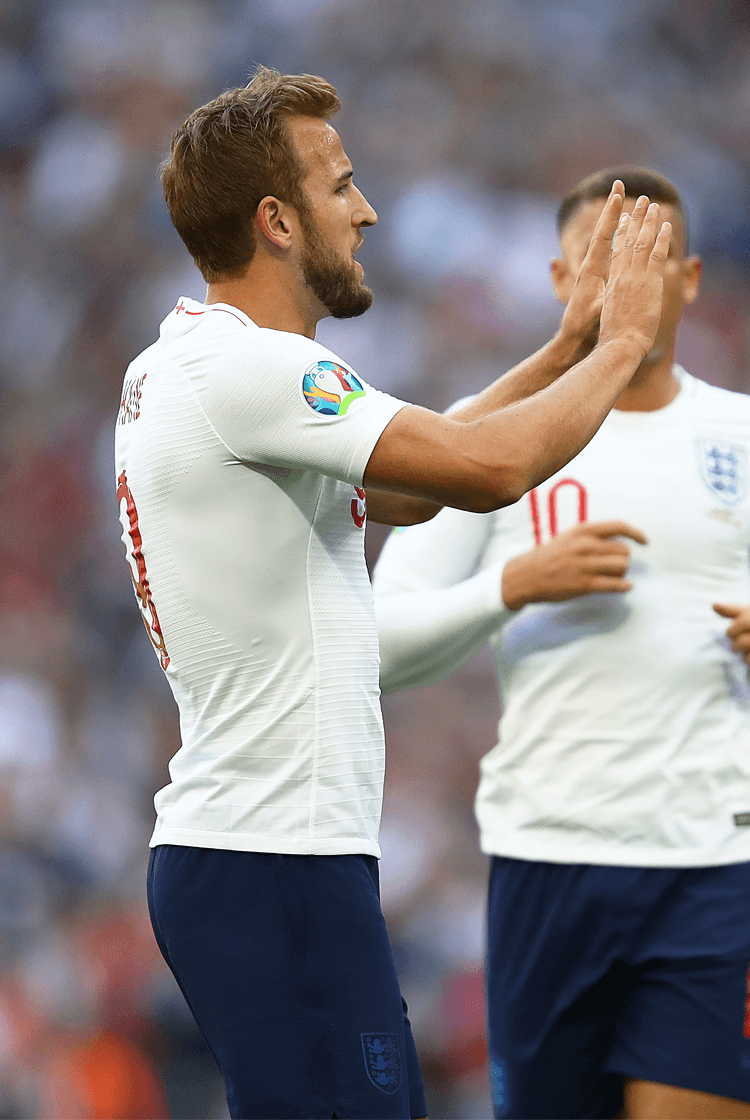 England head into Tuesday’s European Championship qualifier against Kosovo with three wins from three after Harry Kane’s hat-trick and a goal from Raheem Sterling secured a 4-0 victory over Bulgaria at Wembley. Sterling capitalised on an error by Bulgaria goalkeeper Plamen Iliev after a goal-kick to feed Kane for a close-range finish on the turn, and the captain doubled their lead from a second-half penalty when Marcus Rashford was fouled by Nikolay Bodurov. He then crossed for Sterling to score, and later recorded his 25th goal from 40 England appearances with a second penalty after being brought down by Kristian Dimitrov. Gareth Southgate substituted the influential pair of Sterling and Kane in preparation for the visit to Southampton of Kosovo, and in the 67th minute handed Mason Mount his senior England debut. 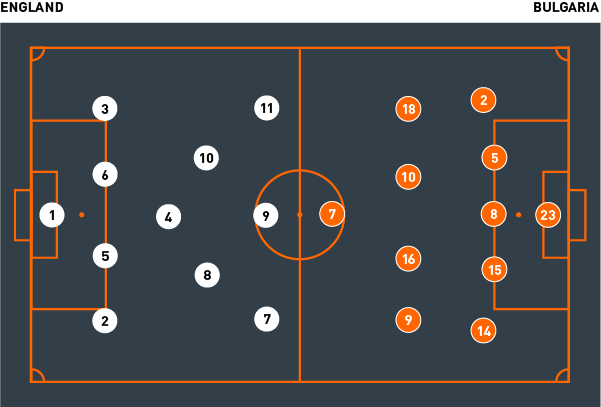 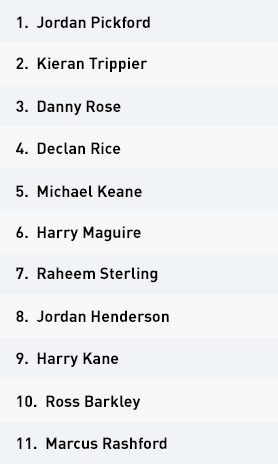 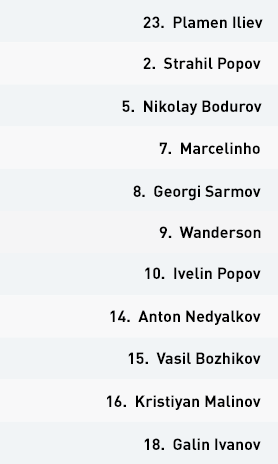 England were organised into a 4-3-3 formation by head coach Gareth Southgate, led by the talented front three of Raheem Sterling, Marcus Rashford and Harry Kane. They dominated possession, as expected, and had to be patient against their deep and compact opponents during the first half; they frequently switched the point of attack in an attempt to move individuals within Bulgaria’s block, while trying to exploit any spaces that then appeared.

The hosts looked particularly to the area behind the visitors’ wing-backs, using the combination between full-back, wide attacker and central midfielder to do so. On the left, Danny Rose, Ross Barkley and Marcus Rashford rotated to draw Bulgaria’s wing-back and right-sided central defender, essentially inviting them to penetrate and play crosses and cutbacks. They also attempted to isolate Sterling and Rashford in one-on-ones against Bulgarian defenders, to encourage them to use their dribbling to beat their men, draw further opponents towards possession and so create further space. The hosts’ tempo slowed in the latter stages, by when the victory was secure and they were instead content to retain possession, and instead probe and penetrate without their earlier ruthlessness.


Bulgaria set up in a defensive 5-4-1 shape, using Marcelinho as their lone striker, while out of possession. They sought to defend deep and tried to threaten England on the counter-attack by keeping minimal distance between their defensive and midfield lines and attempting to limit England’s possession to wide areas in front of those lines.

Marcelinho attempted to screen Declan Rice, which was possible when Harry Maguire or Michael Keane had possession, but he struggled to do so when the ball was with full-backs Kieran Trippier or Danny Rose.

The visitors’ wide midfielders looked to pressure the full-backs when they received; central midfielders Ivelin Popov and Kristiyan Malinov would cover inside, while wing-backs Strahil Popov and Anton Nedyalkov focused on Rashford and Sterling, dropping with them to prevent them receiving and turning. Outside centre-backs Georgiev Bodurov and Vasil Borzhikov similarly looked to stop Ross Barkley and Jordan Henderson receiving between the lines.

England often played passes into the penalty area during the first half, so Bulgaria ensured that they were quick to any second balls by either collecting or pressing from both the front and back if an England player was found. The visitors defended well in the main, but individual mistakes both in and out of possession cost them dear in what was ultimately a comfortable home win.

Krasimir Balakov’s Bulgaria used a 3-4-3 formation when in possession, switching from their 5-4-1 defensive shape by pushing wing-backs Strahil Popov and Anton Nedyalkov either side of central midfielders Ivelin Popov and Kristiyan Malinov. Galin Ivanov and Wanderson advanced to join Marcelinho in a front three. The visitors had limited time in possession and looked to attack on the counter, using their wide attackers and wing-backs to create two-on-ones against England’s full-backs and get balls into the penalty area. They also attempted to build possession from the back, but in doing so undermined their chances of resisting defeat, not least because they were vulnerable in transition.

To try and progress, Bulgaria used vertical rotations between players in different units to create uncertainty among the England shape about how far to track them, and when to pass them on to a teammate. They rotated a central defender and central midfielder in the initial phase, and then a wide attacker and wing-back as the attacker dropped towards possession and the wing-back advanced.

England set up to be flexible out of possession, their shape depending on how high they pressed. When high, they remained in their 4-3-3 formation; when operating in a mid-block, they used a 4-1-4-1 and waited for a pressing trigger. The high press was man-focused and highly-effective – Raheem Sterling, Harry Kane and Marcus Rashford each took a central defender, while Ross Barkley and Jordan Henderson looked after the Bulgarian central midfielders. Declan Rice covered behind them, while full-backs Danny Rose and Kieran Trippier pressed Bulgaria’s wing-backs.

In the mid-block phases, England invited Bulgaria’s central defenders to have possession, instead applying moderate pressure as the ball travelled wide. If this pressure meant they got close enough to affect the ball-carrier, it would turn into a more aggressive press, which would continue as the ball moved. Rice would again cover his midfield partners, and also be in a position to step in front of lone forward Marcelinho if he looked to withdraw to receive.