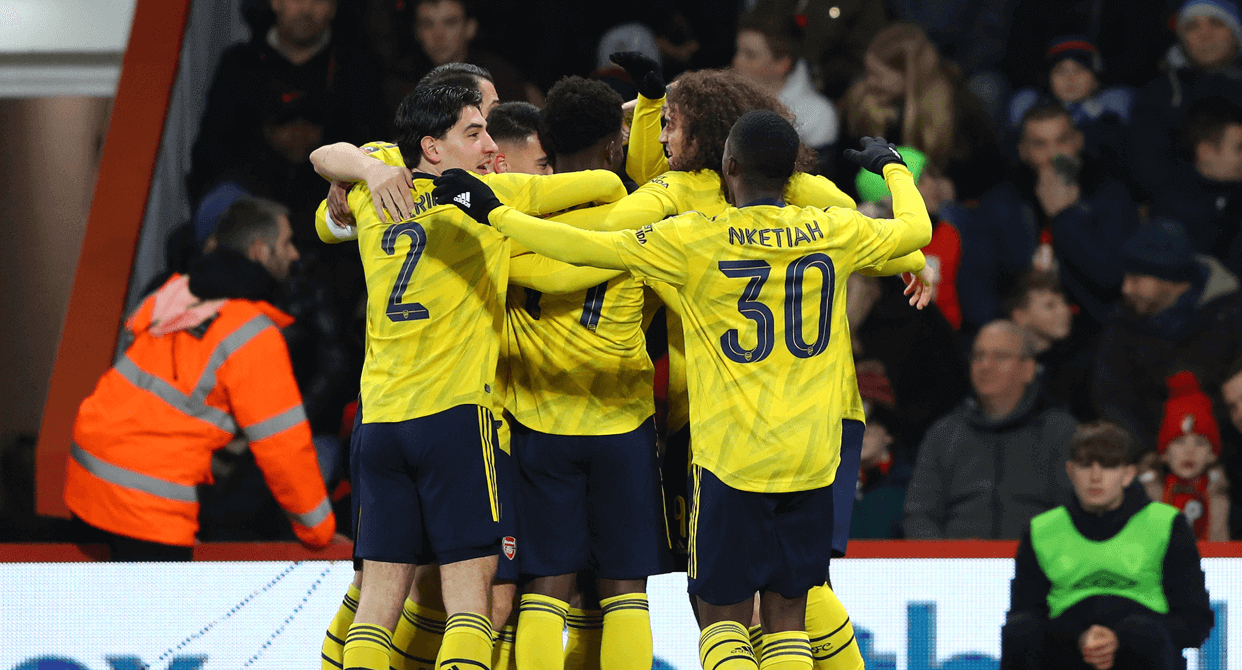 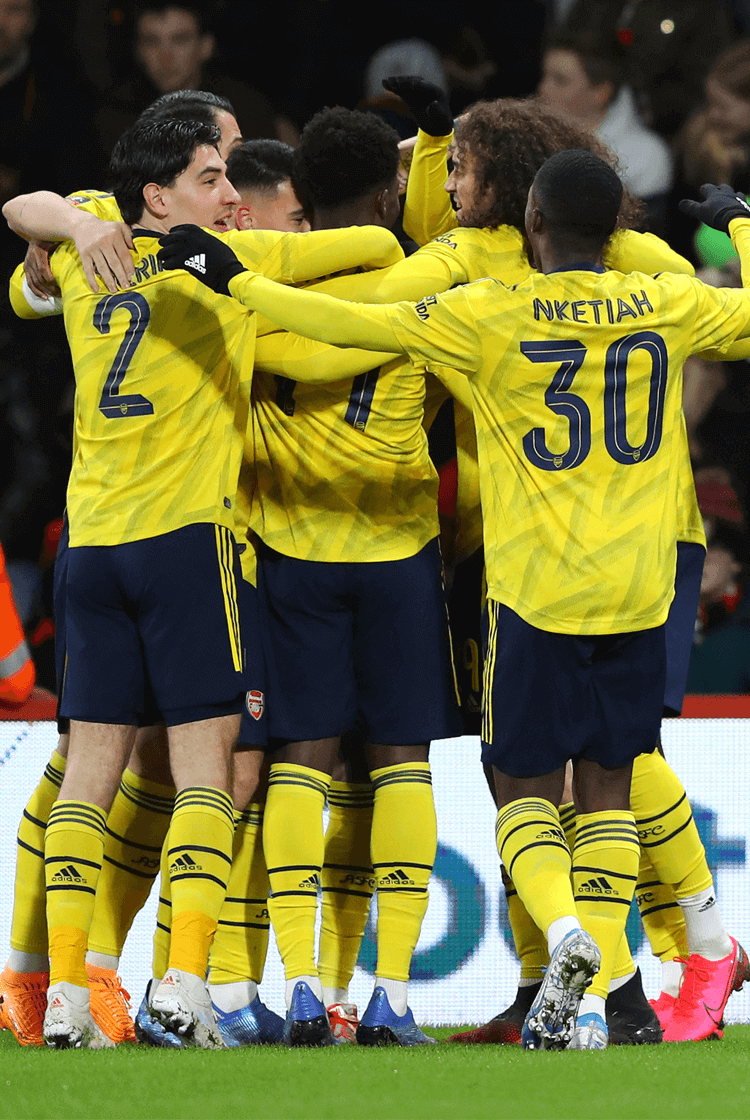 Arsenal progressed into the fifth round of the FA Cup with victory at struggling Bournemouth, maintaining their pursuit of what could prove their finest chance of concluding 2019/20 with a trophy. They demonstrated further signs of adjusting to Mikel Arteta's methods when goals from Bukayo Saka and Eddie Nketiah gave them a two-goal lead by half-time, and resisted pressure from their hosts until the fourth minute of second-half stoppage time, when Sam Surridge scored for Eddie Howe's team. "We gave it a good go in the end," the Bournemouth manager said. "It was just a poor start – a tough first half-hour, and we struggled to deal with their movement. We weren't ourselves. But for the last 60 minutes we scrapped and almost got something in the end. There were tactical problems for us. We changed system a couple of times. But we weren't ourselves out of possession." Arteta, whose position as Arsenal manager Howe had once been linked with, said: "In the first half we were really, really good. They executed everything we planned in a really good way and showed the courage to make big decisions. We played with that accountability, making decisions and I really liked it. They were terrific with their work-rate, showed courage to make those big decisions and not to play safe." 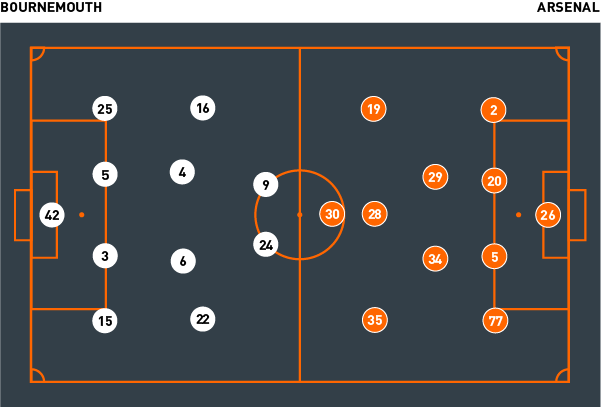 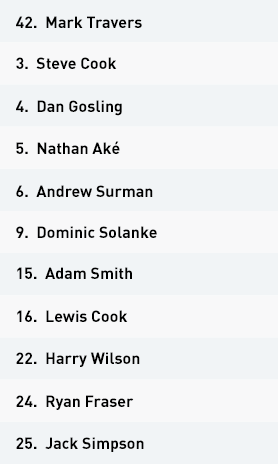 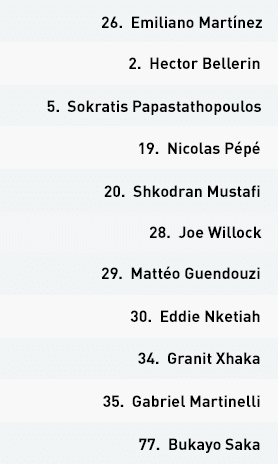 Hosts Bournemouth were organised by their manager Eddie Howe into a 4-4-2 formation, led by the less familiar front two of Ryan Fraser and Dominic Solanke. Against opponents who adopted a 4-2-3-1 regardless of whether they were attacking or defending, they struggled to maintain possession, and to threaten in the final third.

Their attempts to build-up play involved Harry Wilson and Lewis Cook advancing into the final third, from either side of central midfielders Dan Gosling and Andrew Surman, who in remaining deep contributed to Howe's team often adopting a 4-2-4. If Arsenal were able to defend with six defenders against Bournemouth's six attackers, through those attackers too often playing on the same horizontal line the visitors were rarely stretched and able to maintain their shape.

Bournemouth were therefore restricted to playing into the feet of their attackers, who would then receive with their back to goal with a lack of support, and also under pressure from behind. That they soon fell two goals down contributed to Howe demanding his team also adopt a 4-2-3-1, in which Cook was given a more familiar central role in the midfield two alongside Surman, and Wilson, Fraser and Gosling formed the three behind Solanke.


Their new shape encouraged their attackers to play on different lines and their full-backs to advance – inviting combinations in wide areas – and led to Bournemouth not only beginning to truly influence play but to create good quality attacks. As their wide attackers Wilson and Fraser moved inside into the half-spaces that existed, occupying the relevant defender but, with an overlap from full-back, being presented with opportunities to continue to attack.

Perhaps significantly, in a way they have rarely shown in recent years, Arsenal adopted a cynical approach in an attempt to frustrate their opponents. Determined to disrupt the momentum Bournemouth were building, they committed tactical fouls to halt play through stoppages, and even to request treatment.

Arsenal again adopted the 4-2-3-1 formation that Mikel Arteta has favoured since his appointment as their manager. Eddie Nketiah, recently recalled from his loan spell at Leeds United, featured as their central attacker against hosts defending with a 4-4-2.

They largely controlled possession throughout the first half, when their greatest challenge was attempting to overcome Bournemouth's mid-block. Eddie Howe's team used a pressing trap to manage their intensity while they were without the ball; they remained compact when possession was in central areas and increased their intensity when it moved to Arsenal's full-backs. If it then travelled to central defence they would attempt to force Arsenal towards their own goal.

Both teams' positional structures meant that Joe Willock, operating as an attacking midfielder, was most commonly Arsenal's free number. In an attempt to find Willock between the lines they increasingly used Xhaka as a false full-back, inviting Bukayo Saka to advance from left-back and beyond Harry Wilson as Xhaka attempted to draw him. The Swiss' positioning there also encouraged three-on-twos against Ryan Fraser and Dominic Solanke, who Arsenal drew across the pitch by circulating possession.

When that led to a further defender advancing from defence, and by extension commiting one of Bournemouth's midfielders, a passing line to Willock was created, encouraging him to receive between the hosts' defence and midfield. Howe's team responded by attempting to keep smaller distances between those units, and through a central midfielder screening passes to him, but Willock recognised he could draw his opponent and, in turn, create a passing line to Nketiah.

By Willock also supporting Nketiah the visitors had a consistent method of attack, and one which contributed to their second goal and Bournemouth thereafter defending with a 4-5-1. The hosts' greater width helped to nullify the threat posed by Xhaka, and created a free number to remain with Willock without disrupting their press, ultimately inhibiting Arsenal's creativity.