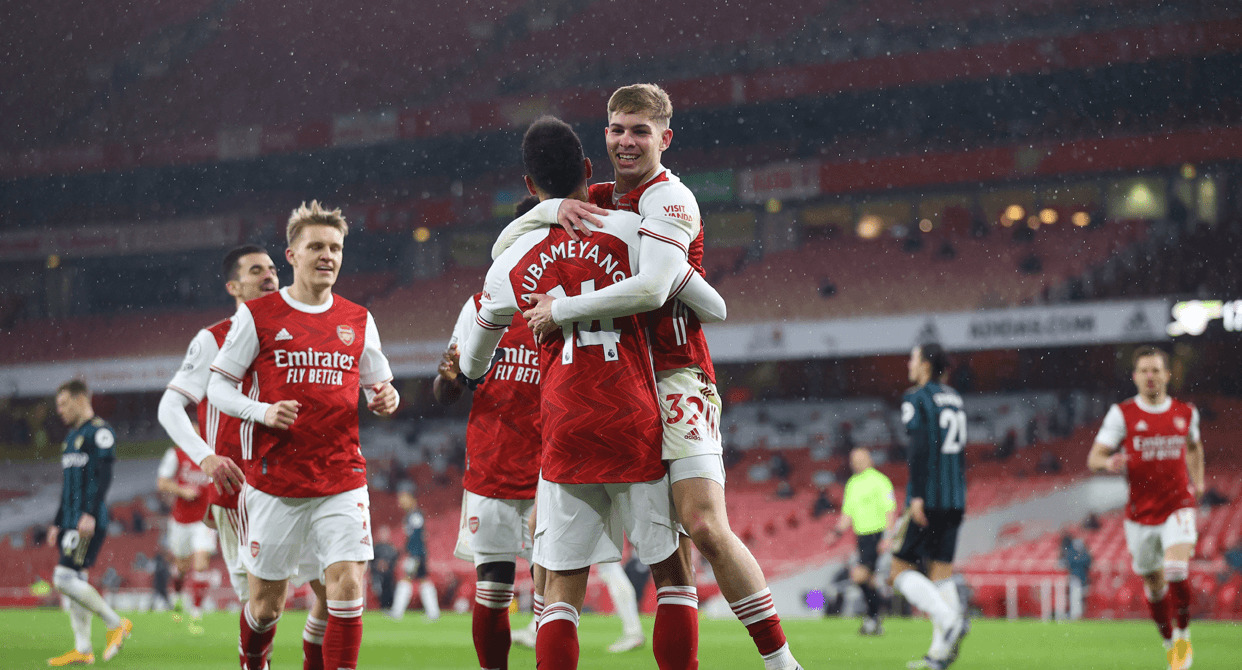 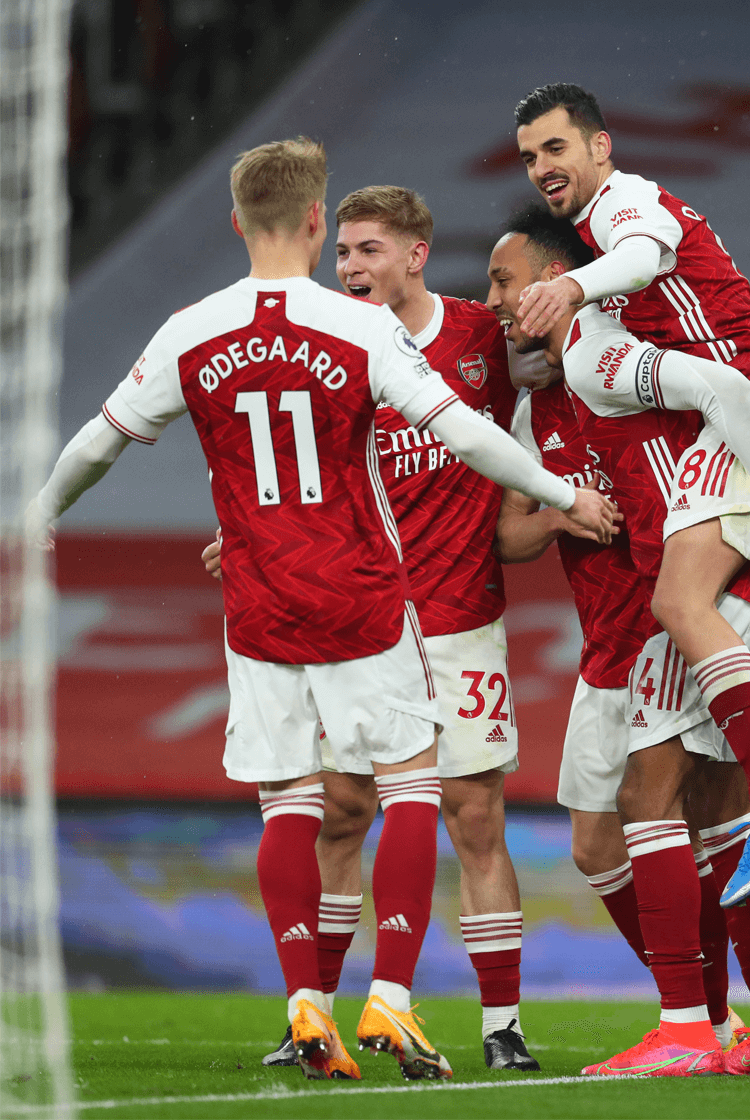 Pierre-Emerick Aubameyang scored a hat-trick to inspire a victory that took Arsenal into the top 10 and left them on course to challenge for the top six. He struck twice in the first half, the second time from the penalty spot, before a further finish from Hector Bellerín gave them a commanding, three-goal half-time lead. His third goal put Mikel Arteta's team 4-0 up, and though Leeds gradually responded via efforts from Pascal Struijk and substitute Hélder Costa, they rarely looked at risk of not securing all three points. "We have been missing Pierre-Emerick Aubameyang's goals and him at his best," Arteta said. "If he is in that type of form we are going to be closer to winning football matches, that is for sure – we cannot just rely on him but he is a big piece of our puzzle." Leeds' respected manager Marcelo Bielsa said: "We couldn't pressure their build-up and we could not avoid their pressure when we were trying to build from the back. You could see it clearly, the opposing manager prepared the game better than I did. We did not manage to bring the ball from our half to their half." 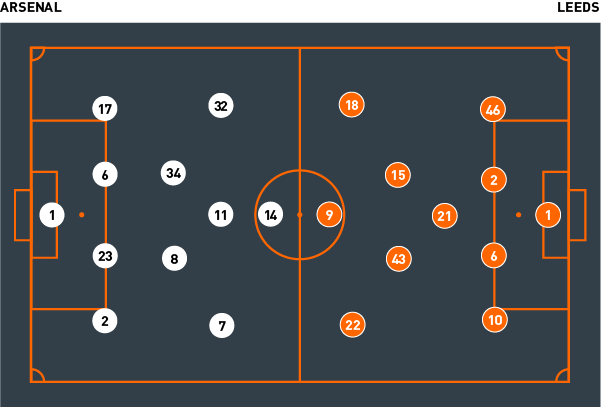 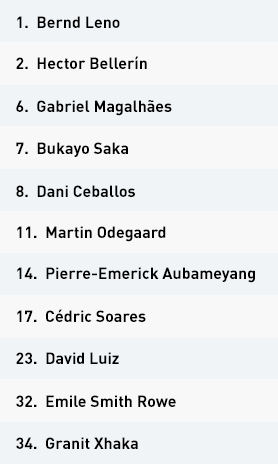 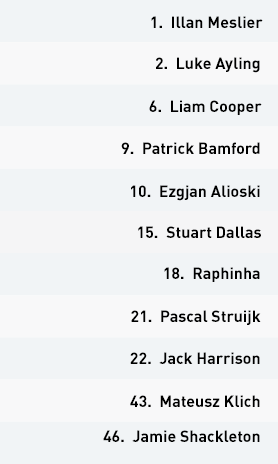 Arsenal were set up by Mikel Arteta into a 4-2-3-1 formation led by Pierre-Emerick Aubameyang. Their opponents, Leeds, defended with a 4-1-4-1 featuring Pascal Struijk at the base of their midfield.

They attempted to press their hosts high up the pitch, via Patrick Bamford and Jack Harrison encouraging Arsenal's central defenders infield. Mateusz Klich and Stuart Dallas prioritised Dani Ceballos and Granit Xhaka, and Struijk both covered behind them and, when necessary, took Martin Odegaard. Their press meant that Arsenal had to be bold in playing into the feet of those in midfield – to the side the relevant player could protect possession from his opponent – and those passes were followed by others into their full-backs, drawing a defender out of position and creating the spaces sought by Arsenal's front four.

Leeds also often defended in a man-oriented manner that involved individuals tracking their opponents into different areas. Arsenal, in turn, sought to capitalise by drawing those defenders into areas that unbalanced Leeds' structure and created the spaces they required to attack into. Aubameyang not only unselfishly did so, he rotated with Emile Smith-Rowe to invite his younger teammate to operate in the half-spaces and central areas of the pitch that he favours, taking Aubameyang into a position from where he could attack from the left, as applied when they scored their opening goal.


Contrasting movements were also used to create further spaces that could be reached by runs from deeper positions. One prominent example involved Odegaard moving to take Struijk with him and Ceballos making a forward run to receive possession further forwards.

Arsenal's movements were a consistent feature that offered potential, and led to the creation of spaces through which they penetrated. They also offered more individual movements, which somtimes made the difference between losing, maintaining or advancing possession. That they were so clinical in front of goal rewarded their efforts.

Leeds were organised by their manager Marcelo Bielsa into a 4-3-3 formation led by the front three of Raphinha, Jack Harrison and Patrick Bamford. Their hosts, Arsenal, defended with a 4-2-3-1.

Arsenal's wide attackers led their press by screening the outside shoulder of Leeds' central defenders, in turn screening Leeds' full-backs. Martin Odegaard, operating as their number 10, prioritised Pascal Struijk, and Dani Ceballos and Granit Xhaka took Mateusz Klich and Stuart Dallas. If the shadow cover provided by their wide forward was insufficient, the relevant full-back would also advance to take his opposite number, but they resisted permanently doing so because of the space that would leave for Leeds' wide forwards to attack into, and the three-on-three it risked against their remaining back three. A position halfway between wide forward and full-back was therefore preferable.

Leeds sought to build possession from defence but Arsenal's level of organisation made it difficult for them to do so, so their goalkeeper Illan Meslier attempted to beat the first line of Arsenal's structure by playing aerial passes to Leeds' full-backs, but those were inconsistent. Struijk therefore began to withdraw into defence to evade Odegaard, so Arsenal adapted by pressing with a front three of Pierre-Emerick Aubameyang, Bukayo Saka and Odegaard.


Bielsa's team therefore had to pursue less conventional ways of creating space. One involved positioning both central midfielders on the opposite side of the pitch to the ball and one then making a run towards the opposite side, creating time and space to execute the next action. Individuals also regularly moved from their positions to draw Arsenal's away from theirs; one midfielder, for example, would make diagonal runs away from his area while another would move into the area he had vacated.

Runs of that nature were evident in the build-up to Leeds' second goal. The Arsenal midfielder responsible for taking a specific opponent was reluctant to follow him to the point of leaving his position, but struggled to pass him on to a teammate already prioritising another opponent, contributing to Leeds' success. There were also occasions when Arsenal resisted pressing and reorganised into a 4-4-2 mid-block, via Odegaard advancing to alongside Aubameyang.

During the second half Leeds offered increased positional fluidity, particularly in the attacking half after the introductions of Tyler Roberts and Hélder Costa. They created further spaces in the final third, and succeeded in combining around Arsenal's defenders to create goalscoring chances, but Aubameyang's third goal essentially ensured defeat.