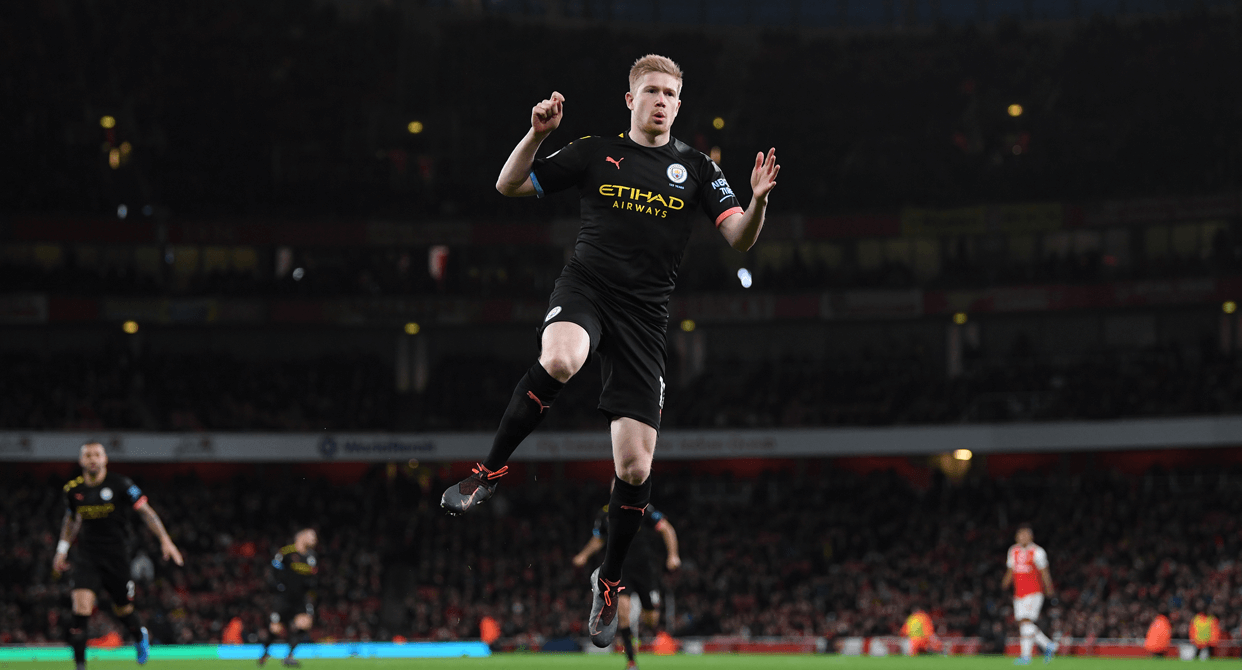 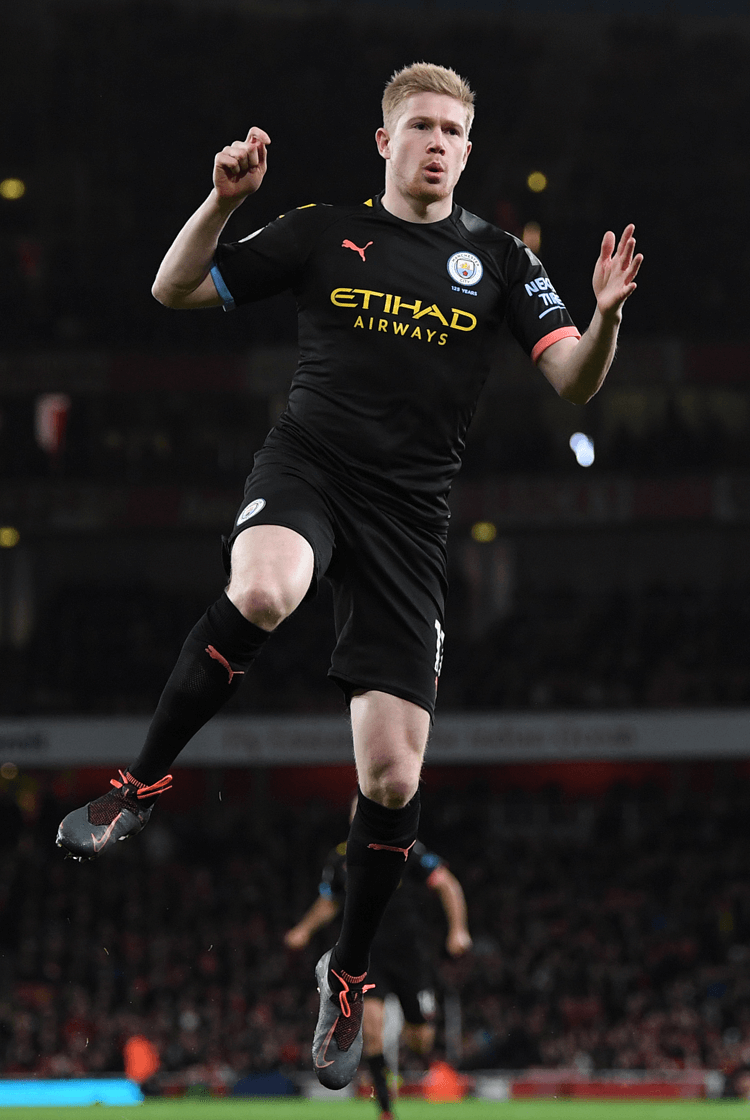 Arsenal's pursuit of a top-four finish suffered a further setback when they struggled throughout the course of a 3-0 defeat at home to Manchester City. The reigning Premier League champions, with potential new Arsenal manager Mikel Arteta present while assisting Pep Guardiola, scored all three goals by half-time and should have extended their lead before the final whistle. Kevin De Bruyne scored twice, and Raheem Sterling once, ensuring that the hosts' caretaker manager Freddie Ljungberg is at risk of concluding his period in charge with only one victory from five; City regardless trail league leaders Liverpool by 14 points. "The problem was the transitions, they scored on the counter," said the Swede. "De Bruyne is a fantastic player but when they start like that it's very difficult to get going again and I felt we got low and they got confident." 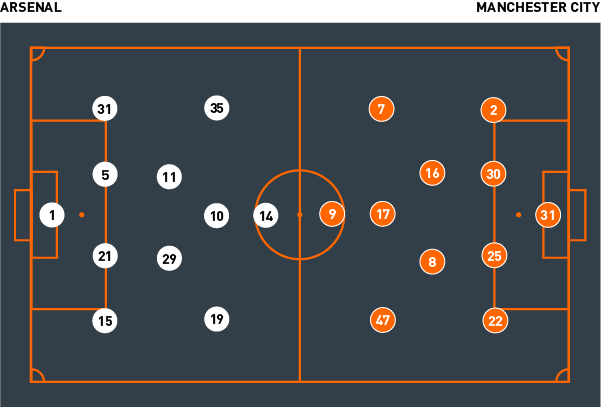 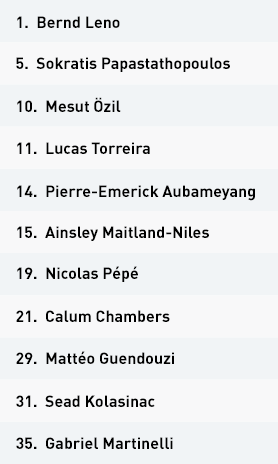 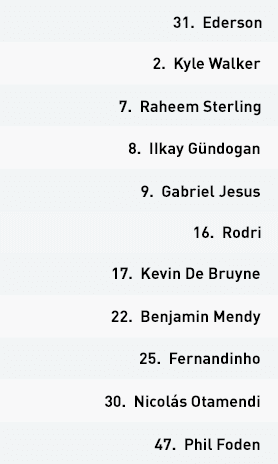 Arsenal were organised by Freddie Ljungberg into a 4-2-3-1 formation led by their lone striker Pierre-Emerick Aubameyang. Against the 4-2-3-1 and 4-4-2 Manchester City defended in, their rigid structure meant that they struggled to penetrate and to create chances, contributing to individuals receiving the ball with their back to goal and recycling it back before it was moved out, and the same pattern was repeated.

Their only variety came when Mesut Özil withdrew into a deeper role, testing the desire of Rodri and Ilkay Gündogan to follow him. They often sought to press him, so Raheem Sterling or Phil Foden capitalised by tucking inside to screen passes to Arsenal's Gabriel Martinelli and Nicolas Pépé, and to maintain compactness. If that created passing lines to the full-back that the hosts attempted to exploit, ahead of the ball they lacked movement – unusually, given Aubameyang's presence – and therefore they rarely received beyond City's weakened defence.

The visitors attempted to force Arsenal wide, and to trap them by the touchline, when they pressed high. Gabriel Jesus pressed the inside shoulder of the in-possession central defender to prevent passes to the other central defender; the ball-side full-back would then move to the wide attacker, who would withdraw towards the ball but could only receive by the touchline, with his back to goal.

This structure encouraged Gündogan and Rodri to remain deeper to follow Özil’s movements, to screen passes into Aubameyang, and to pursue second balls if long passes were attempted. Their influence, from within the double pivot at the base of midfield, largely negated Aubameyang's potential influence.

Pep Guardiola favoured a 4-2-3-1 formation for Manchester City, built on the double pivot provided by Ilkay Gündogan and Rodri. While they were defending Arsenal also used a 4-2-3-1, from which Mattéo Guendouzi and Lucas Torreira were attempting to support their front four.

When City sought to build play, Kyle Walker remained in deep territory to form a three-strong defence, alongside Nicolás Otamendi and Fernandinho, while Benjamin Mendy advanced from left-back to encourage Phil Foden to move inside and to play alongside Kevin De Bruyne as a central attacking midfielder. The combination of De Bruyne, Foden, Gündogan and Rodri created a box around Torreira and Guendouzi that left Arsenal's double pivot outnumbered, and ultimately stretched when they chose to press the wrong opponents.

Guendouzi, particularly, rushed to press further up the pitch, creating large spaces behind him that City would then exploit. Gündogan and Rodri regardless remained in deeper territory, to protect against potential counter-attacks and to counter-press during transitions; when Arsenal attempted to press them but did not do so correctly, De Bruyne was gifted significant space to receive, turn, and advance.

After they scored their second goal, Foden and Raheem Sterling switched wings and, through Sterling willingly attacking Ainsley Maitland-Niles on the outside, Mendy had less need to advance. Gabriel Jesus also withdrew to between the lines, unsettling central defenders Calum Chambers and Sokratis Papastathopoulos.

Torreira and Guendouzi represented a vulnerable-and-disorganised double pivot, which during the first half contributed to City creating multiple goalscoring chances with relative ease. Guardiola's team was also ruthless during transitions, capitalising on their hosts' weak counter-press; Arsenal attempted to surround the ball-carrier and deprive them of passing lines, but they struggled to resist the blindside movements they were then confronted with. City actually had further chances to extend their lead, but their decision-making or a lack of technical quality on those occasions prevented them from doing so.