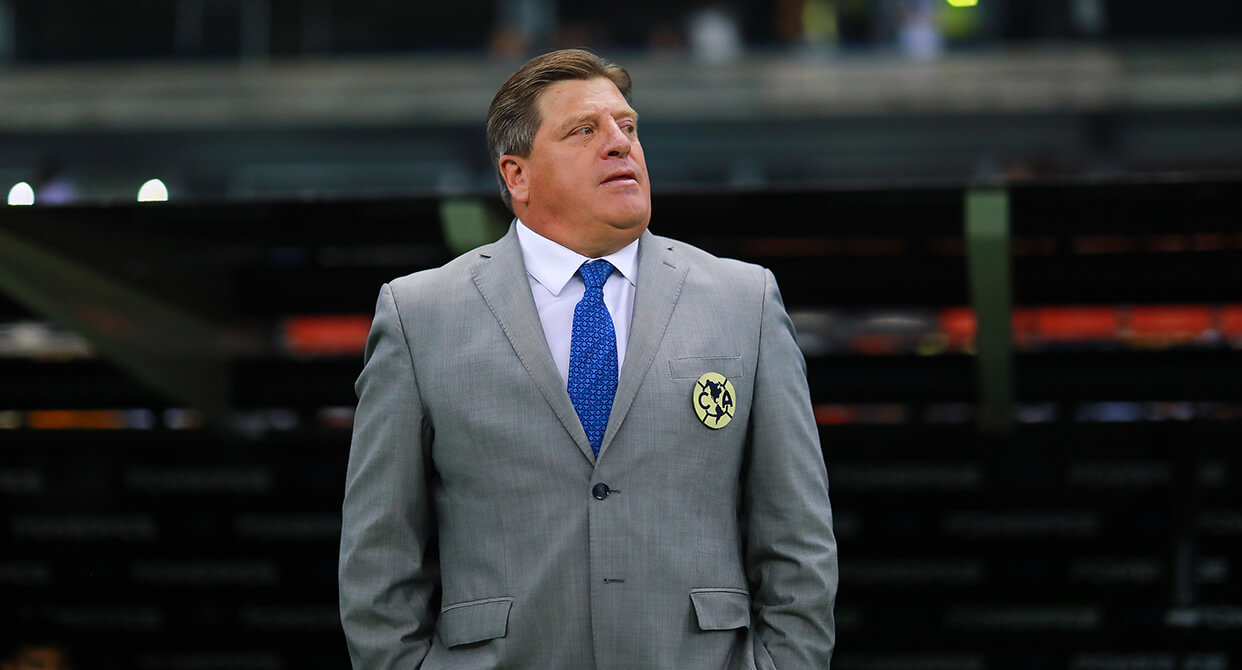 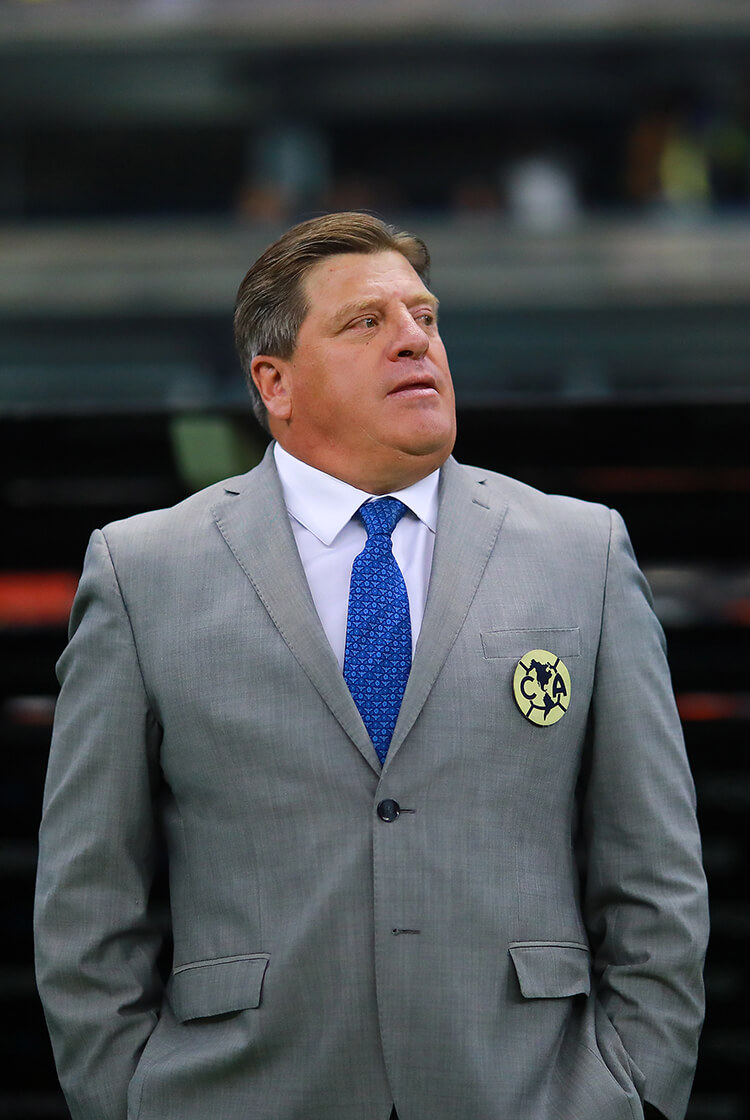 Profile
Miguel Herrera renewing his contract with Club América until 2024 means he remains on course to achieve further success there. His second reign as the Mexican club's manager started in 2017, and there are three records he hopes to break. The most matches in charge of a Mexican club – he is nearing Rafael Garza’s 295; the most trophy wins – his four have already earned him parity with Raúl Cárdenas and Jorge Vieiria; and, if he reaches the end of his present contract, his seven years with América will make him their longest-serving manager.

Herrera also aims to win the Concacaf Champions League, and for the first time. América reached the competition’s quarter finals before the coronavirus pandemic largely halted the professional football calendar.

Playing style
Herrera is recognised as a manager who is committed to his preferred style of play – increasingly, an attack-minded, possession-based approach. In his first spell with América from 2012 to 2013 he mostly favoured a 5-3-2, and his variation of a 4-4-2. From their very first fixture, Herrera’s dynamic, attacking approach could be witnessed – América employed a quick, fluid approach in wide positions, and a fearsome change of pace in the final third.

His team knew how to capitalise on counter-attacking opportunities, and their co-ordinated attacking transitions meant that they reached the opposition’s penalty area with numbers. Herrera built a team that offered a more compact defence without sacrificing their entertaining, attacking style, and which therefore proved very difficult to beat.

It was a 3-5-2 – similar to the 5-3-2 he favoured with América – Herrera used while managing Mexico's national team. A central box that contributed to their attacking approach existed in that 3-5-2 (below); they consistently occupied central territory through two attacking, forward-running midfielders supporting the two strikers in front of them; outside of them, two adventurous wing-backs advanced to provide their width.

In contrast to at América, those wing-backs' priority was to supply that central box, not necessarily to rotate with further runners. Mexico's shape was also capable of changing to adopt a double pivot via one of their three central defenders moving into midfield, increasing their cover when possession was lost and against counters, discouraging quick balls into the spaces behind their wing-backs, and encouraging their attacking players to retain their attacking positions. If with that double pivot, switches of play were likelier, increased spaces were also created via those switches for the attacking box; those featuring in that box regularly shot on goal at the earliest possible opportunity, often from range, and were the target of balls over defensive pressure or around it, via their wing-backs.

After his time with Mexico and Club Tijuana, Herrera returned to América again in 2017. Where once there was a 5-3-2 (below), he told the club of his plans to use a 3-4-3 and a 4-4-2 variant, and the possibility of also switching to a 4-2-3-1. He wanted his team to play out from the back, where possible, have a more possession-based attack, and also to take advantage of spaces in behind with direct balls forward. In the first season of that second spell their main difficulties came in defence, and largely because of the many injuries they suffered.

Their attacking shape offered both significant depth and width, and was therefore capable of creating spaces in promising, central areas. Herrera relies on their spine of Luis Fuentes, Emanuel Aguilera, Santiago Cáseres, Sebastián Córdova and Giovani dos Santos to maintain his desired approach in both the defensive and attacking thirds.

Their goalkeeper Guillermo Ochoa, crucially, possesses a good first touch, is quick off of his line, is reliable in one-on-ones, and is aware of when to play short and when to look for longer passes. Their defence is comprised of tactically intelligent players, features full-backs – Fuentes plays from the left – capable of posing an attacking threat, and in Aguilera a central defender who astutely reads the game and carries possession forwards.

In midfield they attempt to maintain both a sense of balance, and the dynamism required to both screen attempted passes beyond that midfield and, when in possession, to link with the attackers – who offer a variety of qualities – in front of them. Cáseres uses his admirable anticipation and is influential in building play, often by withdrawing into defence to do so; towards the left Córdova makes diagonal, well-timed runs from wide positions, and poses a threat when receiving the ball in deeper positions and shoots from distance. Further forwards Dos Santos is particularly effective at losing his marker and therefore operating as their free man, often alongside a more direct striker.

Defending and pressing
The 5-3-2 and 3-5-2 structures Herrera used with América and then Mexico offered numbers in central areas while they defended. Adopting a back five behind three midfielders covering the relevant spaces made it difficult for opponents to advance through them and reach the penalty area without going around their shape and then crossing, at which point Herrera's teams offered an additional number to defend against them, so opponents instead often risked shooting from range.

If opponents persisted in working around their shape and crossing, Herrera's teams eventually became vulnerable to attacks made on the blindside of their back three, often by the far post, and particularly if his wing-backs hadn't tracked runs off the ball. When opponents attempted playing over their defensive block, a high starting position from his goalkeeper, behind the minimal distances that existed between the units in his team, meant that they were prepared against those efforts. Similarly, if a central defender lost the first contact, those three midfielders were in a position to swiftly apply pressure.

Herrera's earlier teams often formed a low or mid-block that encouraged opponents to advance beyond the halfway line before pressure was applied, and that pressure often came via the closest central midfielder moving to press the ball carrier. With the remaining two midfielders defending against either those making runs or those receiving in a relatively static position, the compactness that existed around their three central defenders proved reliable.

It was later, after returning to América, that he encouraged a more proactive defence. His team's increased grasp of possession means them defending with a higher defensive line and a back four. With the additional player in midfield or in the final third, they apply a higher press, and counter-pressure in midfield.