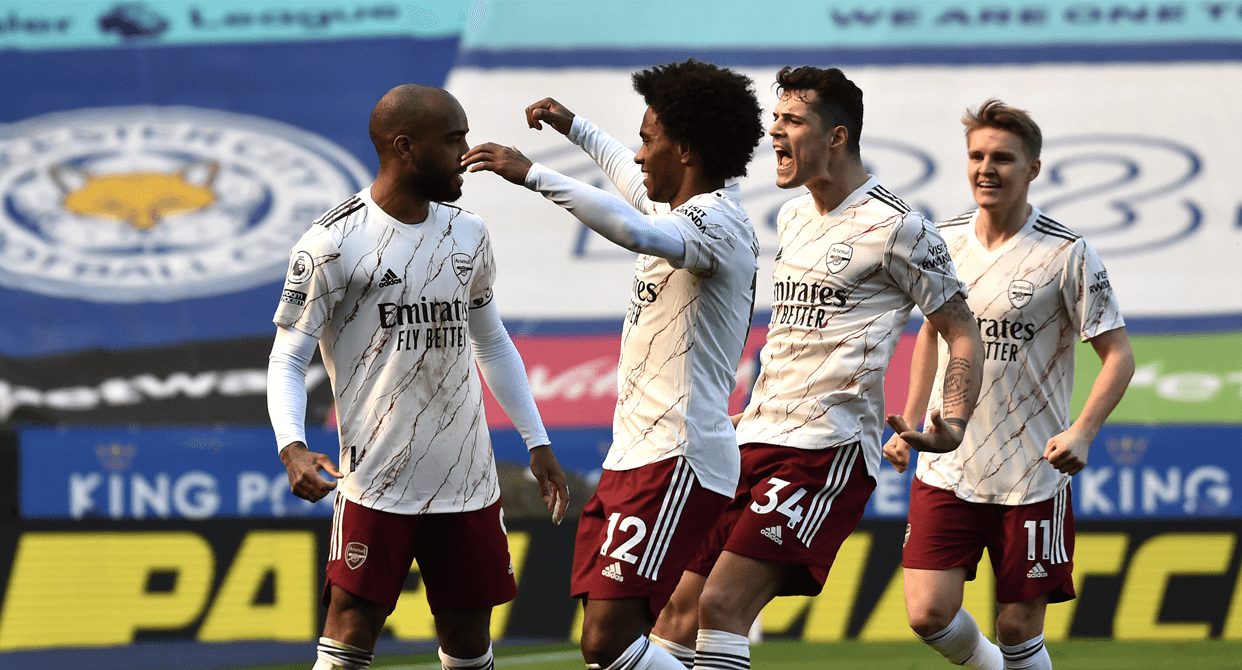 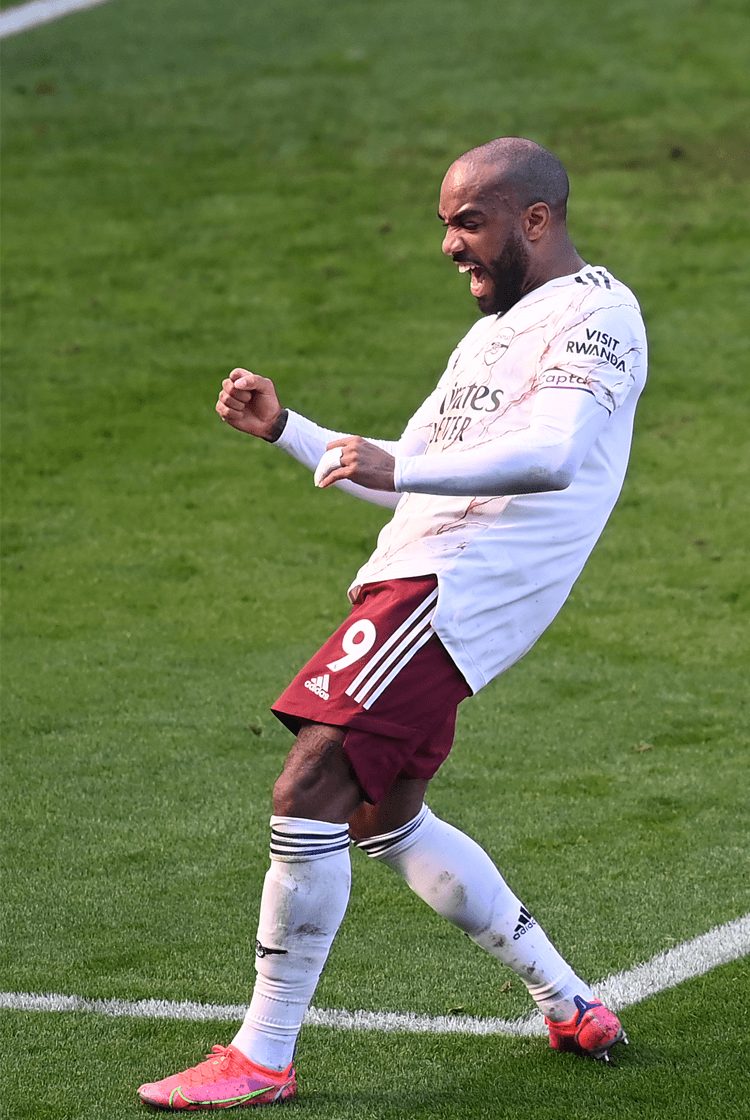 Arsenal's season continued to gain overdue momentum with an impressive victory at Leicester. Just days after the win over Benfica in the Europa League that forced their manager Mikel Arteta into numerous changes, they largely outplayed opponents they may yet need to compete with to again reach the Europa League in 2021/22. Despite conceding an early goal, scored by Youri Tielemans, they remained composed to build a commanding lead via first-half goals from David Luiz and Alexandre Lacazette – the latter from the penalty spot – and another from Nicolas Pépé in the second. "The way we are playing looks much closer to what we want," Arteta said. "The way the team is evolving, we have some consistency in recent months." Leicester's manager, Brendan Rodgers, said: "We went with 4-4-2 but there wasn’t enough movement in it, it was too static for my liking, but in the second half we were a bit better. We got off to a good start, but I still didn’t think we were taking the ball as much as we would want to." 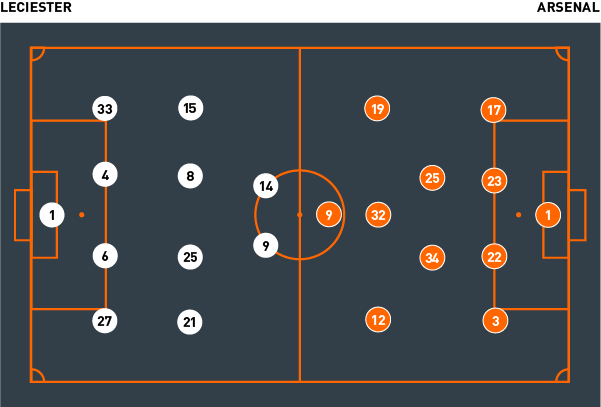 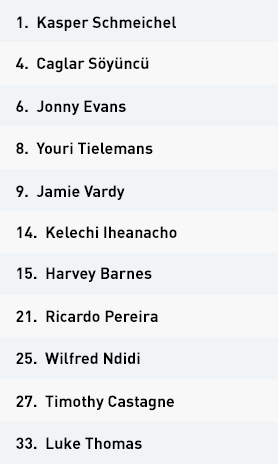 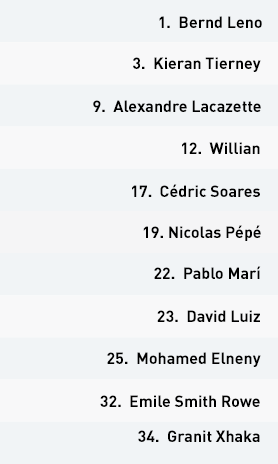 Leicester were set up by Brendan Rodgers into a 4-4-2 formation with which they regularly sought to transition into attacks after regains. Arsenal defended with the same 4-2-3-1 with which they attacked.

Rodgers' team also prioritised avoiding the overload that might have threatened them in central midfield, and took the lead when Youri Tielemans aggressively pressed out of central midfield and towards the right before shooting and scoring. Arsenal offered rotations towards the left side of their structure that offered Leicester increased potential there, as Tielemans' goal demonstrated.

With Leicester continuing to struggle to combine into their central midfielders, Jamie Vardy and Kelechi Iheanacho made runs into wide areas from their central starting positions, and timed them with Harvey Barnes and Ricardo Pereira moving infield from their roles as Leicester's wide midfielders. When the combination of those movements drew Arsenal's full-backs forwards, spaces were created in which Vardy and Iheanacho could receive more direct passes. Leicester's central midfielders also worked to draw one of their opposite numbers forwards to press alongside Emile Smith Rowe, limiting the Arsenal midfielders' ability to defend against Pereira and Barnes.


Arsenal's wide forwards prioritised their opposing full-backs, and a higher pressure was applied to Leicester's attempts to build from deeper positions, ensuring they instead had to continue to focus on playing over midfield. The hosts regardless only gained territory, and rarely threatened on goal.

When that contributed to Leicester's central defenders having more possession, Smith Rowe committed to a higher press alongside Alexandre Lacazette. Granit Xhaka was sometimes then unable to cover both central midfielders, and those midfielders created new angles from which to receive. Although that helped Leicester make it out of their defensive third, the fact Arsenal still had a further defensive midfielder in a deeper position meant that Leicester struggled to progress possession further to the point of testing Bernd Leno.

Arsenal adjusted again by covering Smith Rowe's movements with one of their wide forwards tucking infield, and continued to do so when Martin Odegaard replaced him. Leicester's struggles to play through their defensive block and match the numbers they offered in the centre of the pitch continued.

The visitors continuing to apply a high press meant space emerging between the lines in Arsenal's structure, but even then Leicester's front two proved unable to build on the clipped passes played into them. Aerial passes towards the wide areas were instead attempted, but the crosses or balls in behind that followed were comfortably defended against.

Arsenal were organised by their manager Mikel Arteta into a 4-2-3-1 formation that on this occasion was led by Alexandre Lacazette. Their hosts, Leicester, defended with a flat 4-4-2.

Leicester's front two sought to restrict access into the double pivot at the base of Arsenal's midfield, so Arsenal instead played around that 4-4-2, via David Luiz advancing into midfield and towards the right, or Granit Xhaka withdrawing towards the left; whichever option was taken, Mohamed Elneny remained as their most central defensive midfielder. On the occasions Luiz moved wider, Xhaka positioned himself as a third central defender; when Luiz remained central, Xhaka remained in midfield and Cédric Soares instead featured in central defence.

Xhaka's positioning regularly encouraged Kieran Tierney to advance from left-back, and when he did so Willian drifted infield to alongside Emile Smith Rowe, behind Leicester's midfield, drawing Timothy Castagne with him and increasing the space Tierney had to attack into. Only Ricardo Pereira, a natural right-back, starting as Leicester's right-sided midfielder and therefore tracking Tierney's runs prevented Tierney from posing a greater threat.


Arteta's team was more one-dimensional and had a more direct approach towards the right. Nicolas Pépé, unlike Willian, consistently remained wide, and balls were often played in behind Leicester's left-back Luke Thomas for either Pépé or Lacazette to chase before they then attempted to combine with Smith Rowe. Willian's movements from the left encouraged Lacazette to drift towards the right, in turn reducing the pressure that otherwise would have existed around Pépé when he attempted to cut infield on to his left foot.

Their equalising goal came after Arsenal's runners created a well-timed block to free up Luiz to head in from a free-kick, and they then continued to threaten towards the left before switching to the right, and with success – to the extent that Pépé won the penalty from which Lacazette gave them the lead. Lacazette's willingness to withdraw into midfield also enhanced their ability to create overloads there. He worked effectively with Martin Odegaard, who replaced the injured Smith Rowe, and his movements were complemented by Willian and Pépé increasingly attacking infield when possession reached the final third. Their third goal demonstrated those movements perfectly.

Through Xhaka also more consistently moving into central defence, Cédric and Tierney both more regularly advanced from full-back, and Willian and Pépé adopted more permanent, narrower positions. Lacazette supported towards the left, and Odegaard the right, strengthening their ability to build around Leicester's front two and continuing to trouble their hosts, long after their third goal.