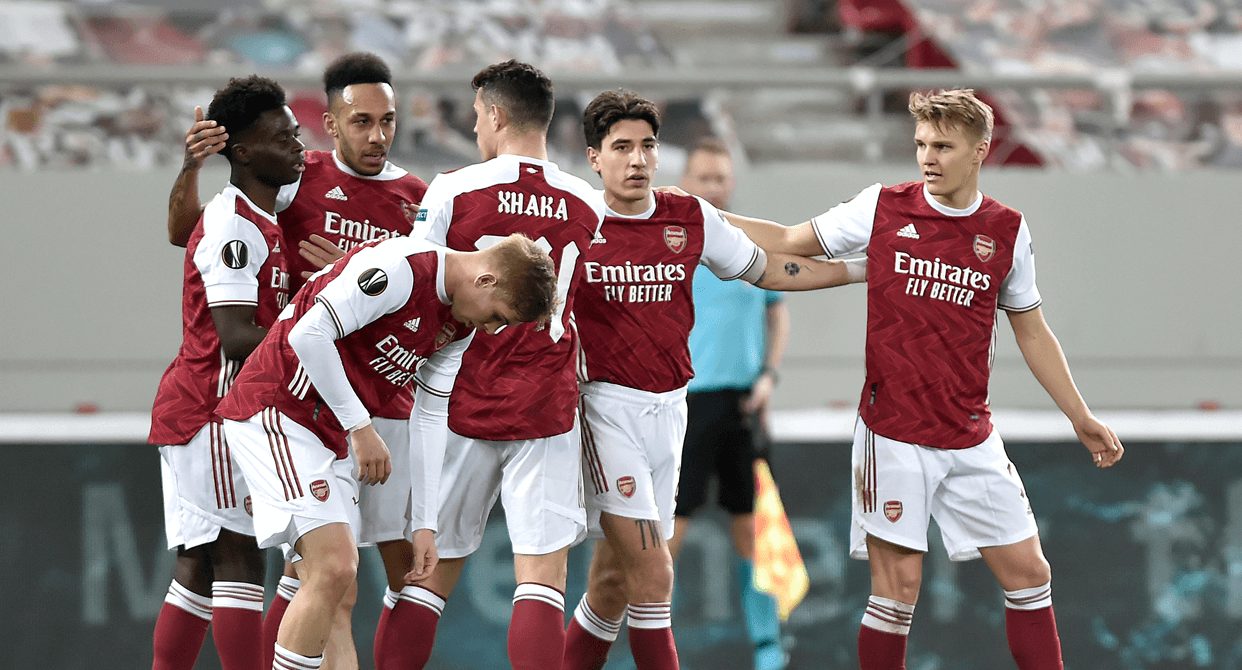 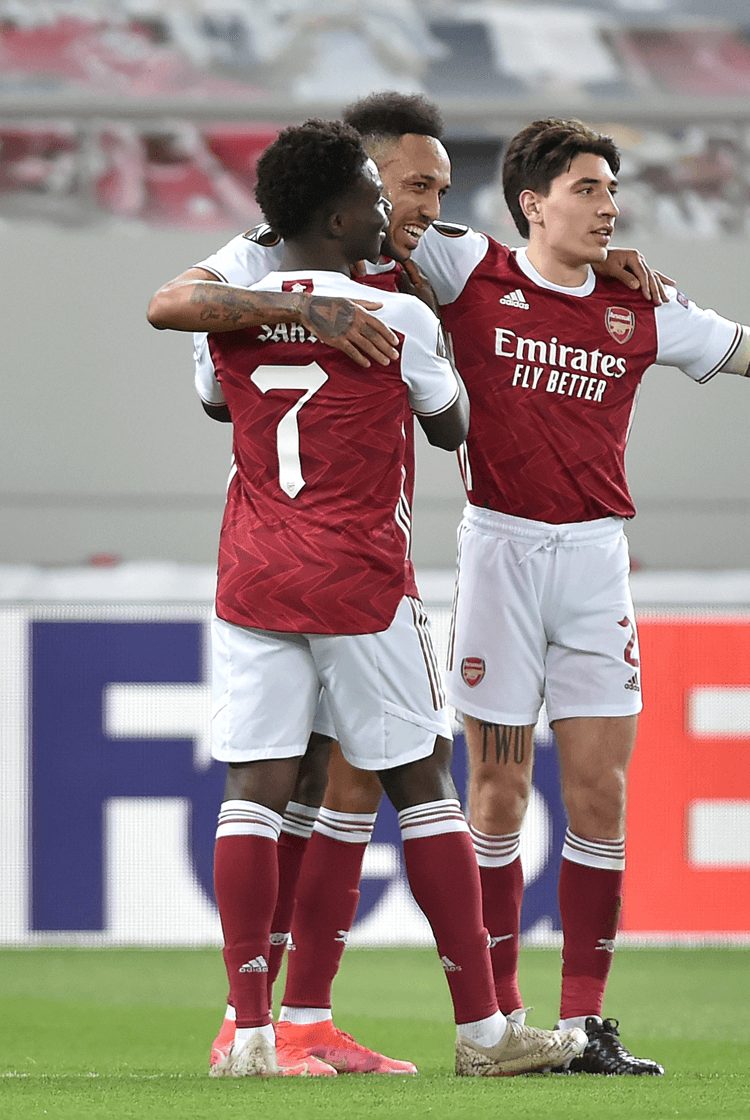 Arsenal progressed to the last 16 of the Europa League when Pierre-Emerick Aubameyang's late goal completed their comeback from a goal down against Benfica. The forward's return to form has been crucial to the signs of improvement they are showing under Mikel Arteta – he also scored their opening goal – which are perhaps best demonstrated by the variety they are showing in the final third. Kieran Tierney brought them level midway through the second half, after Diogo Gonçalves and Rafa Silva struck to cancel out Aubameyang's first and then give Benfica the lead. "Willian changed the game," said Arteta. "He gave us much more composure in moments, produced some creativity, produced the goal for Kieran and we need everybody on board.” His opposite number, Jorge Jesús, had said: "Arsenal is a team built to play for the top five in the Premier League. It is not in the top five, but it has the players to do so. It has a lot of resources and is turning this competition into a chance to qualify for the Champions League." 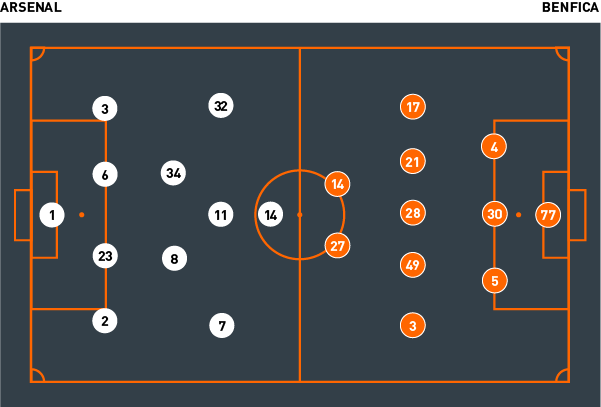 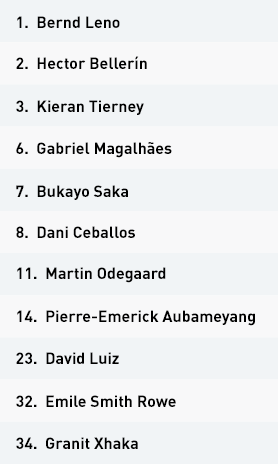 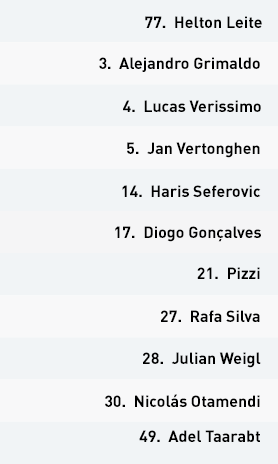 Arsenal set up with the 4-2-3-1 Mikel Arteta is increasingly favouring, and on this occasion Pierre-Emerick Aubameyang led their attack. Their opponents, Benfica, defended with a 5-3-2.

The first line of Benfica's pressure worked to restrict access into Dani Ceballos and Granit Xhaka, often delaying Arsenal's attempts to build play from defence, and contributing to Arsenal instead building into their full-backs before working possession back infield. When the ball was progressed further forwards, Benfica prioritised covering the spaces between the lines, and their three central midfielders therefore remained close to the back five behind them.

Aubameyang drifted to attack through the left inside channel, Emile Smith Rowe attacked around his opposing wing-back, and towards the right Bukayo Saka operated similarly to Aubameyang. With him moving infield and Héctor Bellerín overlapping on the outside, they offered rotations that regularly stretched Alejandro Grimaldo, and Martin Odegaard moved towards them from his role as their number 10, complementing those efforts. When him doing so meant they lacked a player between the lines, Smith Rowe moved centrally from the left, in turn inviting Kieran Tierney to attack from left-back. Arsenal had both options and potential in attack, but at the risk of being vulnerable to counters.


It was those right-sided rotations that created their opening goal when Saka, inside his opposing wing-back, slid Aubameyang in behind and the striker provided the finishing touch. The movements of Saka, Bellerín and Odegaard continued to unsettle Benfica, even if the same threat didn't exist towards the left, where Tierney's willingness to overlap was met with a central midfielder moving wide to defend around or in front of Diogo Gonçalves. That meant Arsenal had to build with greater patience against a deeper defensive block.

Arteta's players remained composed, despite the fact they fell behind. Willian replaced Smith Rowe, and his runs infield from the left made Benfica's midfield even more compact, again encouraging Tierney to receive and cross into the penalty area; it was a combination between Willian and Tierney that led to the latter scoring Arsenal's equalising goal.

That contributed to Benfica offering further cover to defend Arsenal's efforts towards the left, and so Saka and Odegaard took advantage of the increased space that existed on the opposite side of the pitch. Again Saka played a superb penetrative pass, this time in between central defender and wing-back, for Aubameyang to run on to and score.

Benfica were organised by their manager Jorge Jesús into a 3-5-2 formation in which Julian Weigl featured as their most defensive midfielder and linked defence with midfield. There were also periods when Pizzi advanced and Adel Taarabt withdrew to receive to feet, and when then they instead formed a 3-4-3 in which Pizzi featured as the number 10 behind their front two. Arsenal mostly defended with a 4-2-3-1 mid-block; the compactness of their double pivot influenced Pizzi's movements – and therefore whether Benfica's shape was a 3-5-2 or 3-4-3 – and those of Haris Seferovic.

Taarabt and Weigl moved to either side of Martin Odegaard, Arsenal's number 10, and the movements of Pizzi and Rafa Silva increased their ability to support Seferovic and their potential between the lines. Between the three of them they regularly succeeded in progressing through Arsenal's mid-block, but it was then that they struggled to continue through Arsenal's back four. They too often had too many players behind the ball, and those in the final third lacked support once they got that far. Diogo Gonçalves' superb free-kick was what brought them level.

By Silva and Pizzi stretching Granit Xhaka and Dani Ceballos, and with Odegaard prioritising Weigl, space was created for Taarabt to receive possession and dictate play; if Xhaka and Ceballos instead sought to limit the space around Taarabt, Pizzi and Silva had increased freedom to attack the inside channels. Benfica posed their greatest threat when they did so – particularly when they beat their opposing defensive midfielder one-on-one, and when their increased presence around Seferovic encouraged the combinations into their wing-backs, who in turn operated in more advanced territory.


When Arsenal instead defended from deeper territory, Benfica struggled to adjust. Arsenal's wide forwards tracked the runs of their opposing wing-backs, and the back four behind them adopted a narrower shape around Benfica's three most advanced players. Xhaka and Ceballos screened the central areas, and Odegaard and Aubameyang provided their first line of pressure.

A change to Benfica's defensive structure meant them defending deeper and having significantly lessof the ball. They struggled to retain possession as the second half progressed, even if they took the lead while in their deeper defensive block after attacking on a counter following a corner from Arsenal. They struggled to defend against the wider combinations between Arsenal's full-backs and wide forwards, and were confronted with an aggressive high press from Arsenal's front three and double pivot when they sought to build from the back – ensuring they also struggled to access their attacking players.