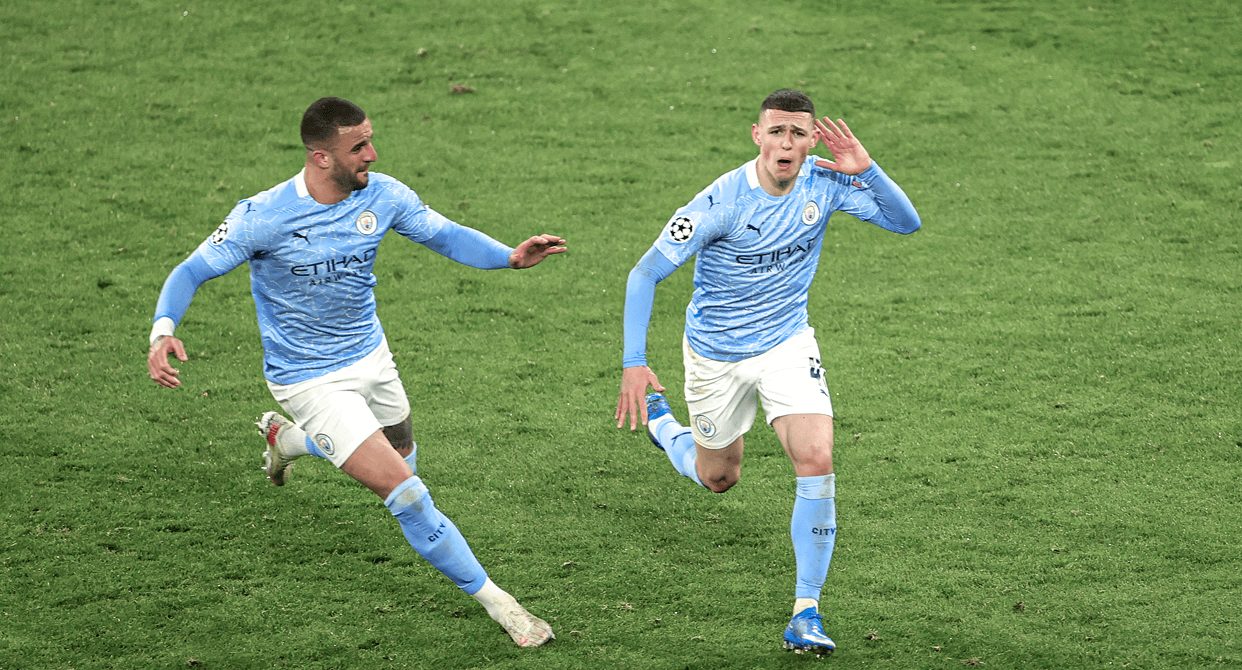 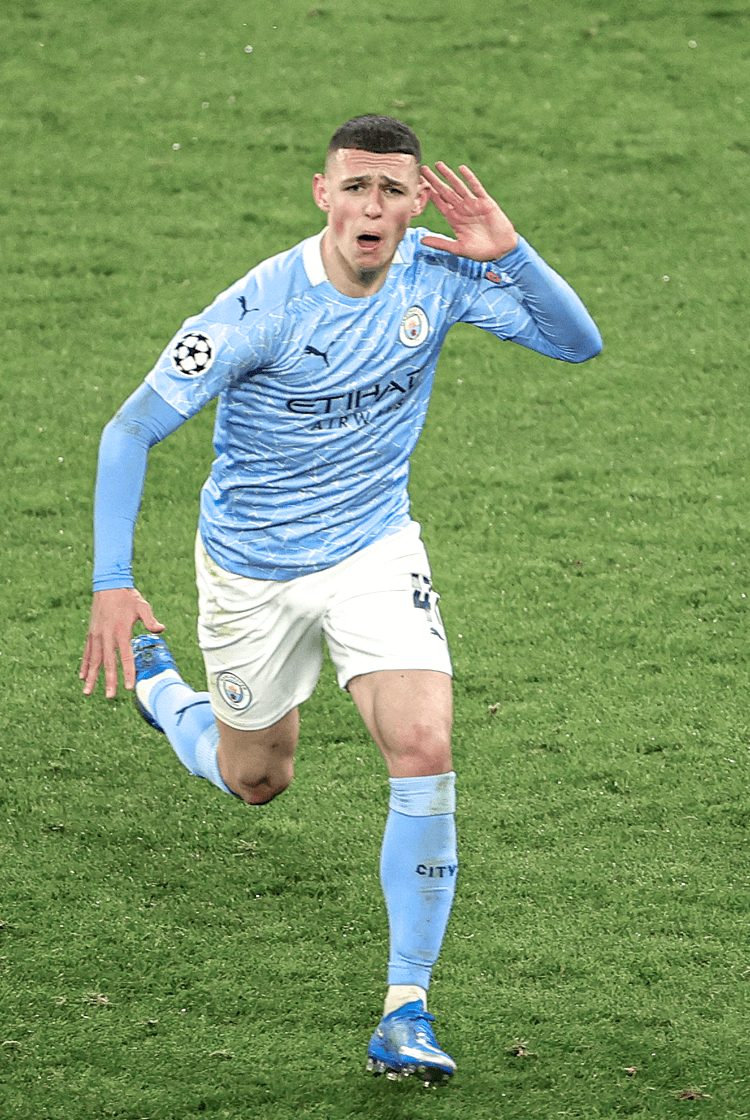 Manchester City progressed to the semi finals of the Champions League, where they will meet Paris Saint-Germain, after a professional victory over Borussia Dortmund. Recovering from a goal down, scored by the promising Jude Bellingham, they proceeded to score twice in the second half via Riyad Mahrez's penalty and a finish from the similarly promising Phil Foden, ensuring they won 4-2 on aggregate. "We were brilliant, except for the first 10 minutes where they were good," said City's respected manager Pep Guardiola. "I'm incredibly happy to be in the semi finals, to be one of the best four teams in Europe, to be against big, strong teams and we will try to be good." His opposite number Edin Terzic said: "The equaliser threw us off course. We wanted to keep the game as tight as possible, and we did that for a long time." 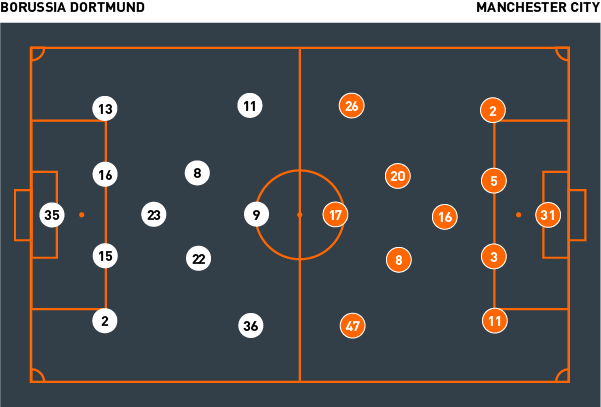 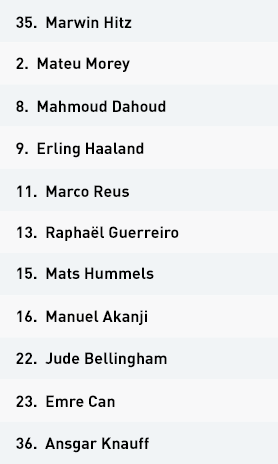 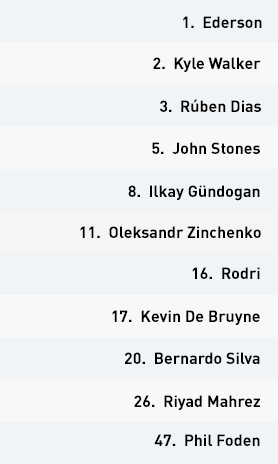 Borussia Dortmund were set up by their interim manager Edin Terzic into a 4-3-3 formation. Manchester City adopted that same shape, and from it they chose their moments to press, initially allowing Dortmund to play the ball across their defence.

If possession travelled further forwards, City deployed a mid-block and prioritised both screening play and forcing the ball wide. Kyle Walker and Oleksandr Zinchenko applied pressure to the ball when it travelled wide, and when it did, whichever of the two was on the far side of the pitch would then tuck infield to preserve their defensive compactness. Their midfield three, similarly, operated with a flatter line, and their front three also became more compact, but because Dortmund struggled to retain the ball in the attacking third and because of City's desire to counter, City rarely defended with increased numbers behind the ball.

Dortmund's full-backs Raphaël Guerreiro and Mateu Morey provided their width; Emre Can remained their deepest-positioned midfielder, and Erling Haaland withdrew into the deeper territory of a traditional 10. To overcome City's block they occasionally attempted to play long and rely on the pace of their wide forwards and the space that potentially created around the edge of the penalty area in the second phase of their attacks.

City's defensive screen demanded Dortmund remained patient, and focused on playing around it. It was when City were yet to recover their defensive shape that the tempo of Dortmund's play increased, in an attempt to take advantage of space on the counter.

It was a long ball that led to Dortmund taking the lead. Played from a deep position, it forced City to track backwards and their defenders to turn their backs on the attack; space around the edge of the area existed at the second phase of play, and when Jude Bellingham ran from a deep position he exploited it and provided the finishing touch.

Attempts to link directly from defence to attack were consistent; Dortmund's midfield then sought to influence the second phase. Haaland adjusted his body shape and positioning to swiftly move into midfield and receive possession from a central defender, and him doing so acted as a trigger for Bellingham to advance and receive the ball when it was set towards him by Haaland, and in turn to attempt to progress through City's midfield.

Can also attempted to start attacks. He regularly received the ball in front of defence on the half-turn and played forwards, demonstrating a range of passing combinations that were either direct and beyond City's defence, as with their goal, or played wide into either an advancing full-back or a wide forward moving deeper.

City scoring forced Dortmund to attack, but City's defensive screen consistently frustrated them during the second half. When they reached advanced territory Can was again influential in operating as a pivot and changing their point of attack, but there also consistently existed the risk of City countering.

Manchester City were organised by their manager Pep Guardiola into a 4-3-3 formation led, on this occasion, by Kevin De Bruyne. Their opponents, Dortmund, defended with a 4-5-1 that kept numbers behind the ball and prioritised defending the width of the penalty area, and also attempted to apply an intense press into City's defensive third.

The lengthier periods for which City retained possession meant them regularly dictating the tempo of play. Dortmund's reluctance to press the ball in the central areas of the pitch encouraged City to play across the pitch, and they did so with a sense of patience that meant them waiting for the correct moment to play forwards into space.

Their full-backs and wide forwards demonstrated a sound understanding that involved them adjusting their positions to ensure that they operated at different heights. Towards the right, if Kyle Walker had possession in the inside channel, Riyad Mahrez drifted towards the touchline, inviting De Bruyne to move across to support and Ilkay Gündogan to advance, and it was that positional flexibility that created passing lanes and options. De Bruyne also moved to support towards the left, where Oleksandr Zinchenko attacked from full-back and often received from Phil Foden or offered a decoy from the channel Dortmund were reluctant to press in.

When regains were made as Dortmund attacked and therefore had numbers forwards, City countered with speed to capitalise on the spaces they had vacated. There were also occasions when their front three would rotate, as dictated by the whereabouts of the ball. The influential De Bruyne regularly withdrew into midfield to contribute when attacks were being built, and his movements created space for Gündogan and Bernardo Silva to advance into.

Further approaches, when they were attempting to build play, involved Rodri and Gündogan moving to create a box with John Stones and Rúben Dias, ultimately to support the full-backs outside of them by giving them increased freedom. They were consistently comfortable in possession, ensuring that in the second half they focused less on achieving penetrations and instead successfully managed the game.