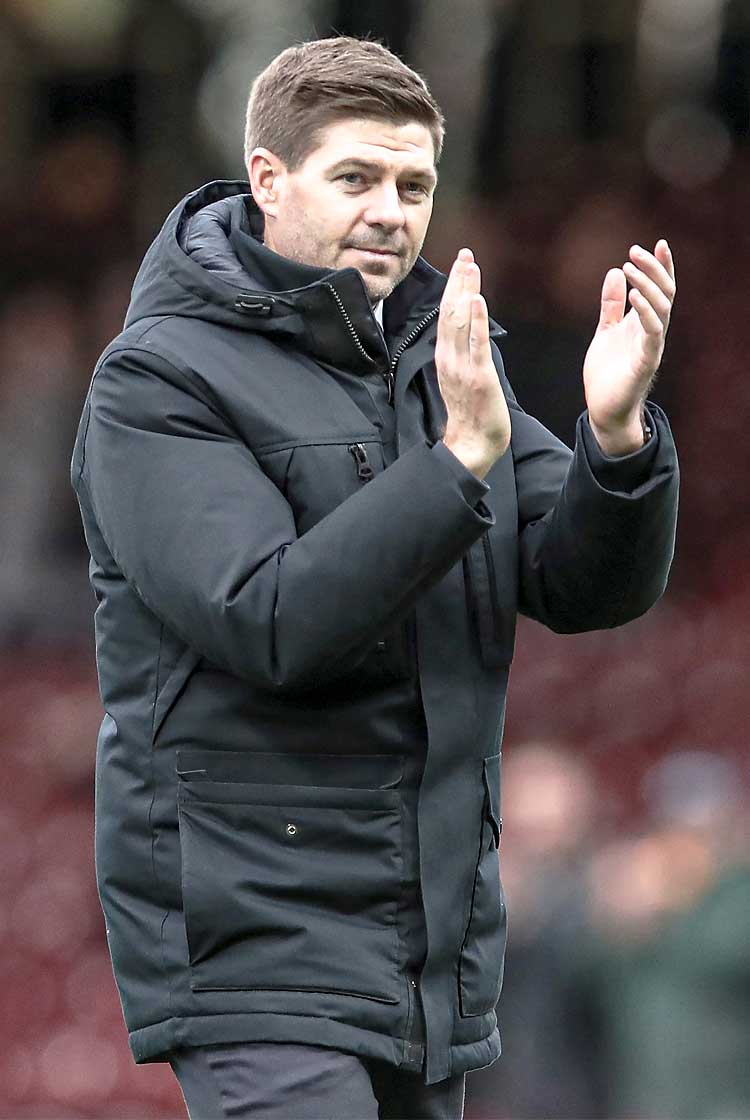 Profile
Steven Gerrard accepted a high-pressured position for his first as a manager when in 2018 he agreed terms with Rangers to succeed Pedro Caixinha. He had an extremely positive three years at Ibrox, leading Rangers to their first Scottish Premiership title in a decade in 2020/21. They did so not only toppling Celtic, but also going the entire league season unbeaten. The reputation he built at Rangers no doubt contributed to his return to the Premier League as a manager. He was named Aston Villa head coach in November 2021, eventually leaving the club in October 2022.

In Rafa Benítez, Roy Hodgson, Kenny Dalglish and Brendan Rodgers, there were plenty of high-quality managers for Gerrard to learn from during his playing days at Liverpool. Benítez noticed early in his reign that Gerrard had a particular interest in the tactical side of the game. "I started explaining the tactics I’d use at Liverpool," the Spaniard once said of his former captain. "It was my first conversation with Steven, and it was all about tactics. Stevie was keen. It was at the beginning for us, when he didn’t need to do it."

Playing style
Throughout his time in management, Gerrard has shown a preference for a 4-3-3, though he has also used a 4-2-3-1. He has consistently promoted an attacking, possession-based style of football. He picks technically gifted players as his wide forwards, as he wants them to be able to carry play towards goal quickly. They are encouraged to attack through the inside channels so that the full-backs can overlap around the outside.

As his approach has evolved, he has increasingly used an additional striker – most often Kemar Roofe – as an inside forward so that his team have an extra forward close to goal. That inside forward moving into narrow positions creates more space wide for a full-back to advance into, while an attacking midfielder can run into the gap between full-back and wide forward. It is also common for Gerrard to use Ryan Kent and Ianis Hagi on their unnatural sides. They can then come off the flank and on to their stronger foot to provide a threat on goal.

By selecting players who are inclined to move infield early, Gerrard has reduced the risk of his midfielders’ route forward being blocked. Rangers are particularly effective in making those movements on their right side (above), where James Tavernier attacks from full-back and provides a significant creative threat in the final third. There are also times when the full-back tucks inside, the wide forward moves into a central position to add to the threat close to goal, and a central midfielder moves out to provide the team’s width (below).

When Rangers play with a double pivot, their central midfielders show more caution. Instead of making forward runs, they prioritise covering behind their full-backs, who have the freedom to advance. It isn’t uncommon to see the full-backs burst through central positions. If play is progressing down the left, for example, Tavernier regularly attacks the penalty area at the far post (below).

If the team builds play in the defensive third, either starting with the goalkeeper or after a reset pass is played from midfield into defence, their two central defenders play a key role. They either play into central midfield or to the full-backs, who will have advanced around the outside of the opposition.

However, Gerrard is also happy for his team to go long. Conor Goldson, Rangers’ right-sided centre-back, often plays direct passes forwards. The team's rotations on the right often draw an additional opponent over to that side. Long switches of play to the left are thus easier to complete and more likely to be effective.

Defending and pressing
Without the ball, Gerrard’s side tends to set up in a narrow 4-3-3 shape. The aim is to force the ball wide, both when they press high and drop into a mid-block. The front line of three aims to cut off access to central areas, while the central midfielders work hard to get across following a switch of play before attempting to lock the ball near the touchline. When this happens, the wide forward will often drop into midfield to add another body and reduce the gaps between central midfielders (below). This happens most often when a full-back is unable to move out and press because an opponent is making a run beyond them. There is, perhaps not coincidentally, a feel of Jürgen Klopp’s Liverpool about Gerrard’s out-of-possession approach at Rangers.

Gerrard's players press aggressively in an attempt to crowd the ball-carrier when they manage to lock play near the touchline. It is increasingly common to see the full-back move out to help try to win the ball back here, while a central midfielder then covers the space behind them. This cover helps Rangers stay compact in central defence, with the closest winger dropping to press the ball-carrier from behind.

Gerrard’s team is very good at spotting opportunities for a regain. Such aggressive attempts to win the ball back, and the commitment his players show to this approach, ensure they are able to dominate possession. Doing so also encourages their most advanced players – usually the centre-forward and wide forward furthest from the ball – to remain in attacking positions. They are thus in a better position to launch an attack and threaten the opposition back line after a transition.

When the opposition retain possession for long enough to force Rangers to drop deeper, they are equally impressive. They organise into a compact 4-3-3 shape with little space between the lines, making central access extremely difficult for opponents. Shots from range are a common sight against this team.

There have been a great deal of positives to the early years of Gerrard’s managerial career. His announcement in November 2021 as the new manager of Aston Villa, succeeding Dean Smith, marks the next stage – his first job in the Premier League.