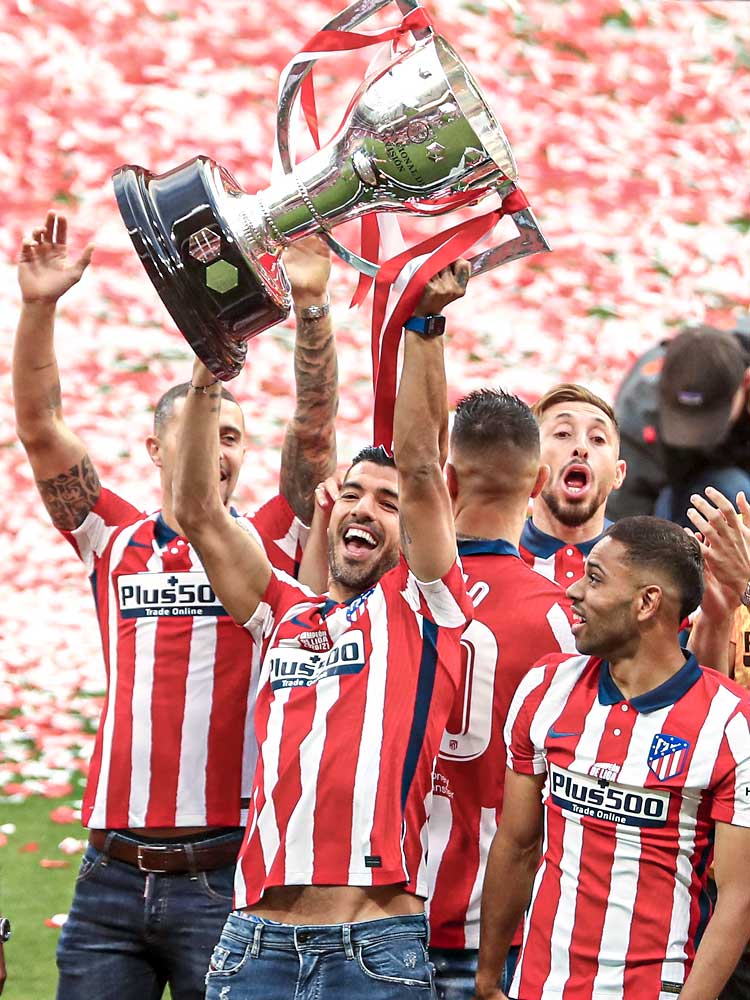 Luis Suárez scored the winning goal as Atlético Madrid recovered from a losing position to seal the Liga title ahead of Real Madrid and Barcelona. Suárez's transfer from Barça to Atlético has largely defined La Liga's title race in 2020/21, so it was fitting that his goal ensured that they finished two points above Real and seven above his former club to record their first title since 2013/14. "It has been such a difficult year, with so many people dying," said their manager Diego Simeone. "To win the title this season, it’s different. It was a difficult year, just like our own history. This was one of the best years for Atlético to be the champion.” Defeat left Real Valladolid in 19th; their relegation was followed by their manager Sergio González being sacked.

Real Valladolid manager Sergio González set his team up in a 4-4-2 formation led by the front two of Marcos André and Shon Weissman, who were supported by wide midfielders Óscar Plano and Toni Villa. They were expansive with their shape; Fede San Emeterio and Roque Mesa provided depth and support in midfield, encouraging Plano and Villa to play almost alongside André and Weissmann, and ensuring their shape at times resembled a 4-2-4. Atlético Madrid defended with a 4-4-1-1.

When possession was being built towards the left, Saidy Janko regularly advanced from right-back to in line with their midfield with the intention of exploiting the wide spaces that Atlético had abandoned to prioritise their defensive compactness. With his body shape open, Janko signalled to his teammates the intent to receive on his back foot and to play forwards at pace; he ran forwards into space having received, and the intensity of his forward play attracted Atlético's defenders towards him.

Atlético’s compact shape meant that Valladolid struggled to make progress close to goal, so it quickly became clear that transitions into possession woud become crucial to their approach. Upon a regain of possession they looked to attack at pace and exploiting overloads where they could. They scored the opening goal by doing so, after a regain that followed a defensive corner. Weissman, who made that regain, Plano, the eventual goalscorer, and Villa and André drove forwards at pace and exploited the space Atletico had left open.

Content to keep the ball under pressure, the hosts looked to switch the point of their attack through their goalkeeper Jordi Masip. Atlético's Luis Suárez applied a high press, and positioned himself between central defenders Kiko Olivas and Jawad El Yamiq with the aim of forcing Valladolid to play towards one side of the pitch. Kiko and El Yamiq adopted a wide position, inviting Janko and Lucas Olaza to adopt high positions alongside those in midfield, triggering the movement of wide midfielders Villa and Plano to the inside channels.

Olaza played a particularly key role for Valladolid when playing out from the back. Depending on what existed in front of him, he either looked to connect play through midfield, by combining with Mesa or Villa, or drove forwards with the ball and into the inside channel, drawing pressure towards him and creating space for his teammates in wide territory. Doing so proved even more useful after the introduction of João Filipe, who from midfield freely interchanged positions with Olaza while they built attacks.

After Valladolid fell behind, it became increasingly difficult for them to break through Atlético’s compact defensive block. Filipe and Plano looked to provide width outside of Atlético’s shape, but they struggled to create.

Atlético Madrid were organised by their manager Diego Simeone into a 4-3-3 formation led by Luis Suárez. Their hosts Real Valladolid defended in a mid-block from a patient, compact 4-5-1 that later also became a 5-4-1.

Suárez was key in connecting play with those in midfield. His intense movement there drew a defender with him, encouraging him to bounce play and drive into the empty space behind him that he had created. Yannick Carrasco also looked to drop into a position to support in midfield when Atlético were building play there; with an open body position and with his willingness to receive on the back foot, his slightly deeper position created a clear forward passing option and defensive security if possession was lost.

Carrasco’s positioning was also influential when Atlético were aiming to penetrate Valladolid's defence. Positioning himself just outside of Saidy Janko, Carrasco’s starting position looked to draw the hosts out of their compact shape, creating options for Mario Hermoso or Saúl Ñiquez to thread the ball through.

Koke regularly withdrew to support in defence and assist in their efforts to build out from the back. When dropping into a position close to Felipe Augusto and José Maria Giménez, Koke received on his back foot and played forward with few touches and towards Carrasco and Ángel Correa, or Marcos Llorente and Ñiguez, as quickly as possible. Possession did not always go through Koke, but his position created increased passing options and a four-on-two in the defensive third.

Atlético showed patience in possession when building play. Moving the ball from left to right across midfield, they waited for the right time to play forwards. Carrasco, Correa and Suárez remained in advanced positions, occupying Valladolid's back four, and creating more space in central territory for their midfielders.

Entering the second half behind, Atletico were forced to look for different ways to penetrate Valladolid's defence. From the early moments of the second period, Llorente looked to move forwards with the ball and attacked regularly, and was supported in doing so by Kieran Trippier's advanced role. Adopting a position in the outside channel to create an additional passing option to feet, he also contributed to the creation of overloads in those same wide areas.

Trippier and Hermoso adopting advanced positions towards Valladolid's defence, and outside of their opposing full-backs, stretched that defence and created increased space in the centre to play through. Correa complemented that by impressively resisting tackles before providing the finishing touch.

Suárez's opportunistic goal gave Atlético the lead, and they were thereafter content to maintain possession. Trippier and Renan Lodi, who replaced Hermoso, resisted advancing to the same degree, and also instead prioritised maintaining their defensive security.