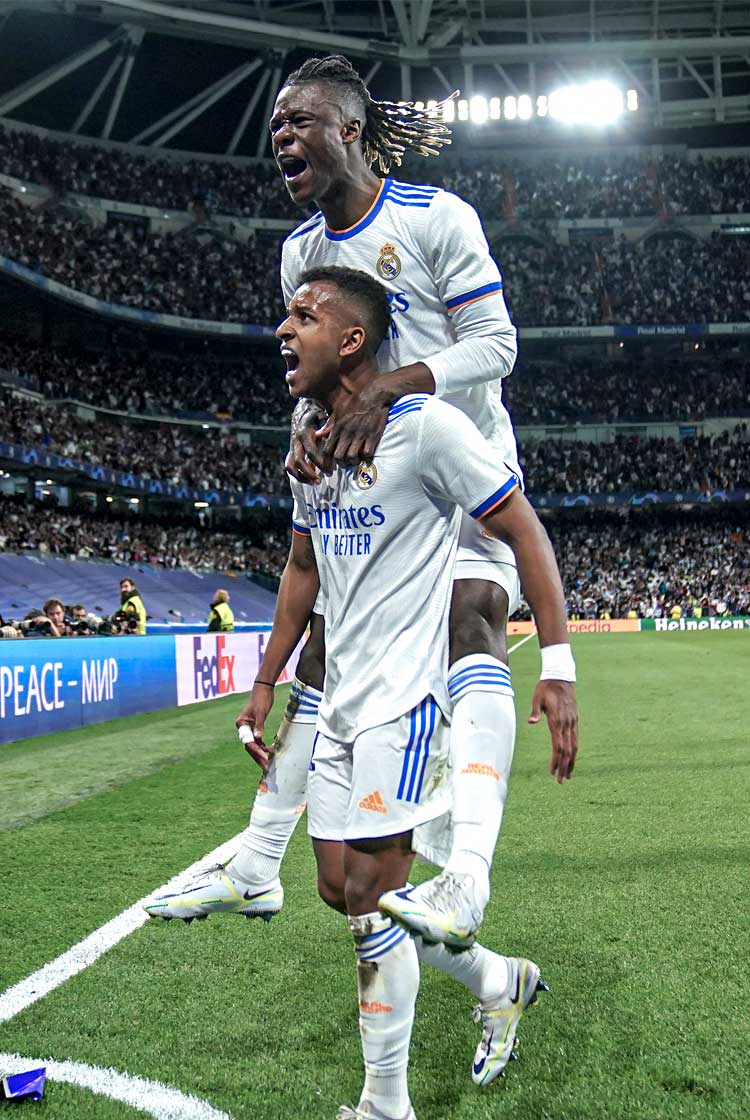 Real Madrid had already produced some of the most remarkable results and comebacks in the history of the Champions League this season. In this semi final second leg, however, they may have come up with the best of the lot. A goal down on the night and 5-3 behind on aggregate heading into the 90th minute against Manchester City, Real were staring at a semi-final exit for the second successive year. Then, up popped Rodrygo with two goals in two minutes to send the tie to extra-time, in which Karim Benzema both won and converted a penalty to win it for the Spanish side.

City manager Pep Guardiola bemoaned his side's erratic display. "We didn't play well in the first half, we didn't find our game," he said. "The second half was much better and, after the goal, we had control. We found our game but unfortunately we could not finish. The players gave everything. We were so close."

His counterpart, Carlo Ancelotti, said history was on his team's side. "I cannot say we are used to living this kind of life, but what happened tonight happened against Chelsea and also against Paris," he said. "If you have to say why, it is the history of this club that helps us to keep going when it seems that we are gone."

Real Madrid were set up by Carlo Ancelotti in a 4-2-3-1 formation, up against Manchester City’s 4-4-2 out-of-possession shape. Fede Valverde narrowed to become a second number 10 alongside Luka Modric, who primarily focused on supporting through the left inside channel. Dani Carvajal pushed forward from right-back to provide width, while Vinícius Júnior held the width on the left (below). Toni Kroos and Casemiro provided the link between defence and Madrid’s two 10s.

City gave Madrid’s double pivot very little space to operate in, while their closest winger jumped out to press the Real full-back on that side. City’s far-side winger then narrowed, covering access into Madrid’s far-side number 10. Whenever Modric dropped to support centrally, a City centre-back aggressively followed him, preventing Madrid from creating a central midfield overload (below). As a result, Real struggled to find any rhythm in the first half.

A key aspect of Madrid’s attacking play was the volume of players they had in central areas, and they moved across to their left side in numbers. With Valverde narrow when the ball was on the left, Casemiro and Kroos pushed across, and Modric was also connected to left winger Vinícius (below). The problem here was that this often left Karim Benzema isolated in attack. The home side thus lacked a penalty-area threat in the first half, and only created chances from quick transitions forward or through direct play.

Once Rodrygo was added to the front line, Madrid were far more balanced in attack, with their wide attackers stretching the pitch and attacking around their opposing full-backs. This opened up more space for the central-midfield three, and Madrid’s trademark central rotations under Ancelotti helped those players find space to receive between the lines. There was also more space for the central players to run off their markers through the inside channels, getting closer to Vinícius and Rodrygo to provide support (below).

Towards the end of normal time, Real committed plenty of players forward, and eventually found two late goals. Marco Asensio was added as a number 10, with Madrid placing both wingers and their number nine and 10 pairing in narrow attacking positions to occupy each member of City’s back line. Further support came from Madrid’s back line (below), as the home side created chances – and two goals – from crosses with a significantly increased presence inside the penalty area. Benzema’s penalty in extra-time then sealed an unlikely comeback.

Manchester City operated in a 4-3-3 attacking shape, up against Madrid’s 4-2-3-1 defensive structure. Bernardo Silva’s mobility and energy, and the timing of his movements from his starting position alongside Rodri in the City double pivot, caused real problems for the hosts. He constantly connected the centre-backs with midfield by dropping deep, and then provided support between the lines to connect the wingers with centre-forward Gabriel Jesus or right-sided number eight Kevin De Bruyne. Whenever Silva held his deeper position alongside Rodri for a prolonged period, De Bruyne became more of a 10 between the lines (below).

Build-up over the Real press

City often used aerial passes to break Madrid’s high press. Luka Modric joined Karim Benzema in pressing City’s centre-backs high up the pitc. With Dani Carvajal and Vinícius Júnior pushing forward out wide and Silva dragging Madrid’s central midfielders forward, space was created for wingers Phil Foden and Riyad Mahrez to receive (below). Ederson and the City defenders often looked to play over the press, into the inside channels, to find the wingers.

Wingers cutting in and full-backs overlapping

In the second half, Foden was moved to centre-forward, with Jesus moving over to the left. This gave City two wingers who attacked across their full-back, cutting inside to shoot or combine with Foden or De Bruyne as the highest number eight. Overlapping runs from Kyle Walker (below) and João Cancelo gave City another element to their attack. With most of Madrid’s counter-attacking threat coming from Vinícius, Walker’s overlaps had the added benefit of forcing the winger to recover into much deeper positions.

Guardiola made significant changes as the game wore on, with Jack Grealish introduced on the left and Ilkay Gündogan joining Silva in midfield. Gündogan and Silva provided frequent penetrative movements beyond Madrid’s midfield line (below) to receive in the inside channels. Vertical passing to break Madrid’s midfield unit was also key in the second half – as Mahrez’s goal showed – with the away side able to access their wingers after they had moved inside.

In extra-time, City came up against a very compact and organised 4-4-2 Real Madrid low block. In response, they formed a 4-2-4 attacking shape, with Foden and Silva as the central threats, drifting outwards to connect with wingers Raheem Sterling and Grealish (below). Gündogan and Fernandinho then formed a central-midfield pair, offering vertical runs off the ball through the gap between Foden and Silva. However, despite their ability to pull Madrid’s full-backs out and connect through the subsequent gaps, City were unable to find a second goal on the night. Their wait for Champions League glory goes on.