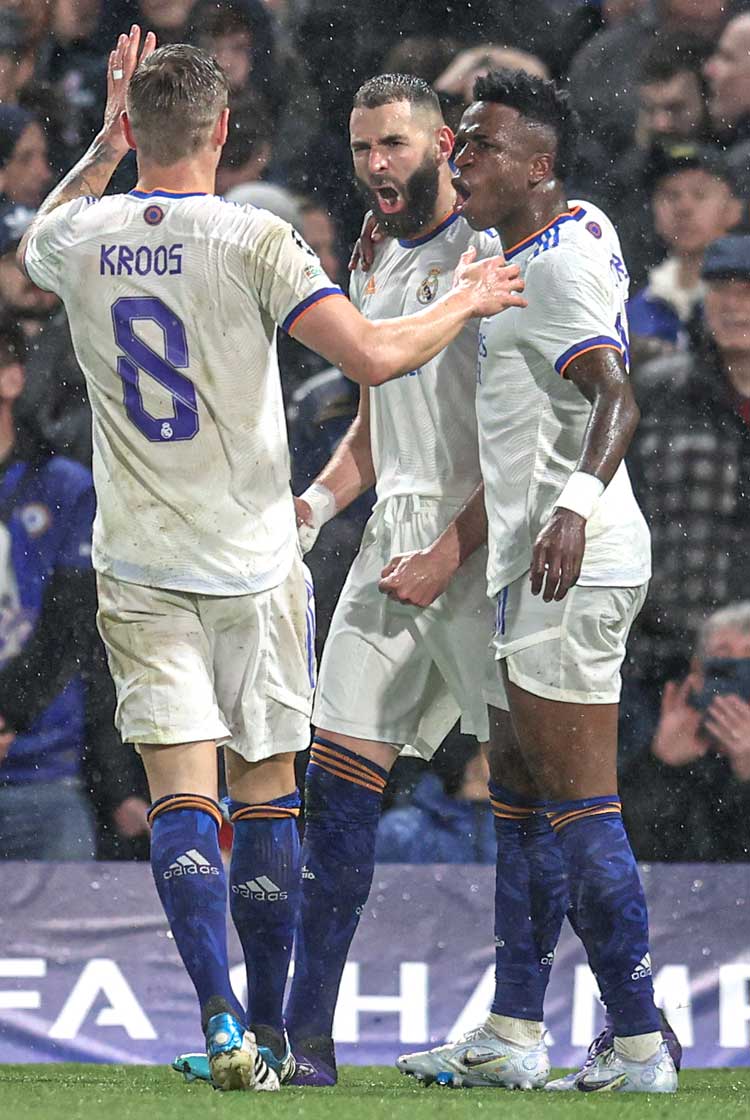 Karim Benzema produced one of the all-time great Champions League performances as Real Madrid put one foot in the semi finals with a convincing win at Chelsea. The Frenchman, having the most prolific season of his career at the age of 34, scored two outstanding headers in the first half before taking advantage of a mix-up between Édouard Mendy and Antonio Rüdiger to complete his hat-trick shortly after the break. He now has an incredible 37 goals in 36 appearances in all competitions for Real this season. His three goals in this game left the reigning European champions' hopes of retaining their title hanging by a thread, and their manager delivered a stinging verdict after the game.

“No, not at the moment, no,” said Thomas Tuchel when asked whether his side were still in with a chance of progressing from the tie. “Because we have to find our level back. I don’t know where it is, since the international break. Our first half is a repetition of the second half against Brentford, in a quarter final of the Champions League against Real Madrid. We were so far off our level in absolutely everything the game demands; you cannot expect a result for this kind of performance.”

Tuchel's opposite number insisted there was still much to play for. “Of course we have a lead but the tie is still open,” Carlo Ancelotti said. “We no longer have the away-goals rule, which is an advantage for Chelsea now."

Chelsea were set up in their usual 3-4-3 formation when in possession, up against Real Madrid’s 4-1-4-1 block. Tuchel’s side focused on pairs out wide formed by a wing-back and the number 10 on that side (below). Mason Mount and Reece James frequently rotated on the right, while Christian Pulisic and Cesar Azpilicueta held their positions more rigidly on the left. This meant Chelsea were fairly predictable – and very limited ­in attacking threat – down their left flank.

N’Golo Kanté pushed forward from central midfield to occupy one of Real’s central defenders, while Kai Havertz moved across to occupy the other. Chelsea looked most dangerous when they built through the inside channels, working around Real’s central midfield, before breaking over their back line. Their only goal of the game came from a cross from a narrow position to the far side of the penalty area, where Havertz headed home.

Real frustrated Chelsea with their low block, with both of their wingers tracking Chelsea’s wing-backs into very deep positions (below). This allowed Madrid’s full-backs to stay narrow, and close to the central defenders. This made it difficult for Chelsea to find space in or near the penalty area, with plenty of cover in the inside channels. Casemiro also dropped very deep, often slotting in between the two centre-backs. Luka Modric and Toni Kroos then provided a screen in front of the defence.

After half-time, with his side 2-1 down, Tuchel changed to a 4-3-3- shape, with Mount and Mateo Kovacic as the two number eights. Madrid man-marked in midfield, so when Chelsea’s number eights started wider before rolling inside to receive, Chelsea were able to connect defence with attack far more consistently than they did in the first half. Although Havertz was often isolated up front on his own, Chelsea’s wide players eventually moved into central positions, with the number eight on the opposite side making a forward run to support Havertz.

Movements through the inside channels

Chelsea ended the game with Romelu Lukaku on as a more permanent and traditional threat up front. He attacked inswinging crosses from both flanks – Hakim Ziyech on the right and Mount and Azpilicueta on the left. Mount often held the team’s width on the left, while Azpilicueta made underlapping runs and Rüdiger supported underneath. On the right, movements through the inside channel were made by Havertz, who was now playing as the right-sided number eight. James held a more reserved position at right-back, though, and Chelsea posed little attacking threat on the right as the game wore on.

Threat down the left

Real Madrid were set up in a 4-3-3 shape, and came up against Chelsea defending in a 5-2-3. They looked most threatening on the left, where Kroos dropped from midfield to support left-back Ferland Mendy. Karim Benzema then dragged Chelsea’s middle centre-back out of defence, which isolated Andreas Christensen for Vinícius Júnior to attack. The Brazilian was a constant problem for Chelsea in the first half; Real’s best chances came through him, including for Benzema’s first goal (below).

Madrid’s build-up play was particularly fluid, with number eights Modric and Kroos both varying their movements constantly. Sometimes they dropped in between a centre-back and full-back; sometimes they moved into a false full-back position to push Dani Carvajal or Mendy higher or inside (below); and sometimes they ran forward to allow Valverde or Benzema to drop and receive between the lines. Casemiro provided cover beneath the ball, which allowed the midfield rotations to take place freely. Chelsea’s double pivot was repeatedly dragged around and pulled apart, while the number 10s were unable to prevent Real progressing through the centre of the pitch.

In the second half, Chelsea defended in a 4-1-4-1, which meant they could track and deal better with Real’s central midfield three. However, Real’s full-backs then moved inside to receive and add another body in midfield (below), while Vinícius and Valverde provided the team’s width. Benzema continued to drop and link with midfield, with Kroos covering on the left to allow Mendy to push forward.

Chelsea changed the way they pressed in the second half, and in doing so they limited how much Real could progress through the centre of the pitch. With Chelsea’s wingers covering their full-back opponent, and the central midfield three going man-for-man against Real’s midfield, the visitors were forced into more direct forward passes, which Chelsea’s defence dealt with well. Havertz curved his press to lock the ball on one side of the pitch (below), and Chelsea’s players did a good job of then stopping Real from playing out. Although Madrid struggled to keep the ball as well and create chances, the damage had already been done, and the match – and possibly the tie – was already over.