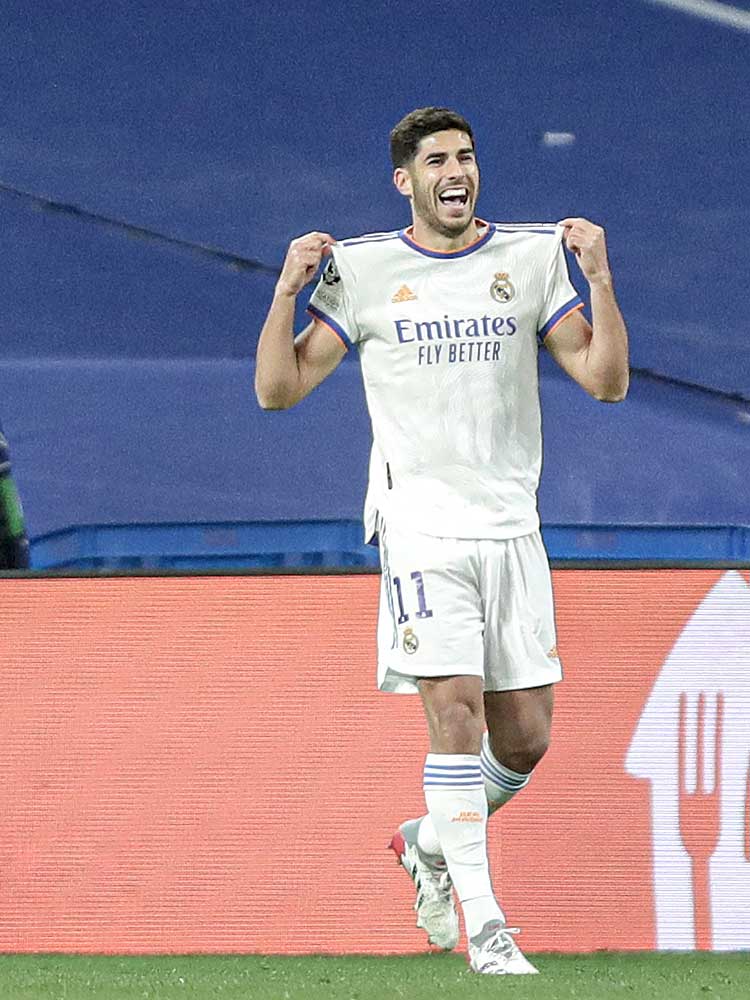 Real Madrid and Inter Milan advanced to the knockout stages of the Champions League after a home victory for Real respectively ensured they finished first and second in Group D, at the expense of Sheriff Tiraspol and Shakhtar Donetsk. A goal in the first half from Toni Kroos, and another in the second from substitute Marco Asensio, 13 minutes after Nicolò Barella's red card, secured all three points. Real's manager Carlo Ancelotti, who was overseeing his 100th victory in the Champions League, said: “The team is doing very well and I don't want to ask any more of them. Sometimes we don't press very high up, but we’re comfortable with a low defensive lock because we don't have midfielders who are able to defend in open spaces. Sometimes it's not very pleasing on the eye, but we're doing really well." His opposite number, Simone Inzaghi, said: "We have to learn because we played well in both games against Real Madrid but lost them both. That tells us we still need to improve in several areas."

Inverting their midfield triangle
The influential Toni Kroos and Luka Modric regularly withdrew into deep positions, behind Casemiro (below) as Real Madrid attempted to progress over or around Inter Milan's out-of-possession 5-3-2. Inter's midfield three covered the central areas effectively, so Kroos and Modric played passes into the full-backs and wide forwards, and Casemiro advanced to, where possible, occupy Inter's midfielders and therefore increase the time and space afford to Kroos and Modric.

Full-backs contributing in midfield
Confronted with a particularly aggressive midfield press, the movements made by Modric and Kroos also proved influential in the first stages of Real's attempts to build possession. Ferland Mendy and Dani Carvajal offered support by moving infield (below), often at the same time as one of Inter's defenders moved into midfield to try and create a four-on-three against Casemiro, Modric and Kroos. Through the full-backs moving infield, Real were able to build around or through Inter's midfield. Luka Jovic also withdrew into positions between the lines to add an additional number in the midfield third and a further option for their attempts to progress through Inter's press.

Attacking with width...
Real's front three otherwise mostly retained advanced positions, and their wide forwards maintained the team's width (below), to pin Inter's back five. Space was therefore created through the inside channels, and was targeted via off-the-ball support – including via Carvajal and Mendy drifting infield. There were also occasions when Modric and Kroos advanced, and Carvajal and Mendy remained behind them to provide cover. This variety repeatedly stretched Inter's midfield three, who struggled to cover the width of the pitch.

... and attacking asymmetrically
After Inter were reduced to 10 men, Real's midfield three held their positions, which meant both better ball retention and defensive protection against Inter's attempts to counter from their 5-3-1 defensive block. Vinícius Júnior held a wide position on the left (below) and attacked one-on-one when he got the chance, encouraging Mendy to move infield and link with Jovic. On the right, Rodrygo moved infield to provide an attacking threat in the centre, and Carvajal overlapped from right-back.

Rotating to progress play
Inter demonstrated potential in their attempts to build possession. The movements of Nicolò Barella and Marcelo Brozovic into their defensive line (below), to preserve a back three, encouraged both of their wider central defenders to advance into midfield and even provide their attacking width. Inter's wing-backs, in turn, moved infield, and drew Real's full-backs with them. With their front two occupying Real's two central defenders, the rotations Inter offered helped them to progress around or through Real's 4-1-4-1 defensive block.

Forming a front three
Barella advanced from midfield in their starting 3-5-2 to a position alongside Edin Dzeko and Lautaro Martínez. With Inter's wing-backs attacking around Real's back four and supported by their wider central defenders, their remaining two central midfielders provided support behind what had become a front three (below). They also protected the central defender who had retained his position; they created plenty of goalscoring chances, but struggled to find a finishing touch.

Attacking on the counter
Inter made an increased number of regains in the midfield third when one of their wing-backs moved infield to press, and they aimed to capitalise on those regains by countering forwards. Their wing-backs' contributions also invited a central midfielder – usually Barella – to advance (below). Against Real's two central defenders, Inter's temporary front three provided numerous forward passing options.

Wing-backs were key
There were also occasions Inter prioritised releasing their wing-backs – later, Danilo D'Ambrosio on the right and Ivan Perisic on the left. Switches of play allowed them to build over Real's 4-1-4-1 mid-block and find their wing-backs. When Inter's front two were positioned on the outside shoulders of Real's central defenders, Real's full-backs were forced infield, leaving Inter's wing-backs free.