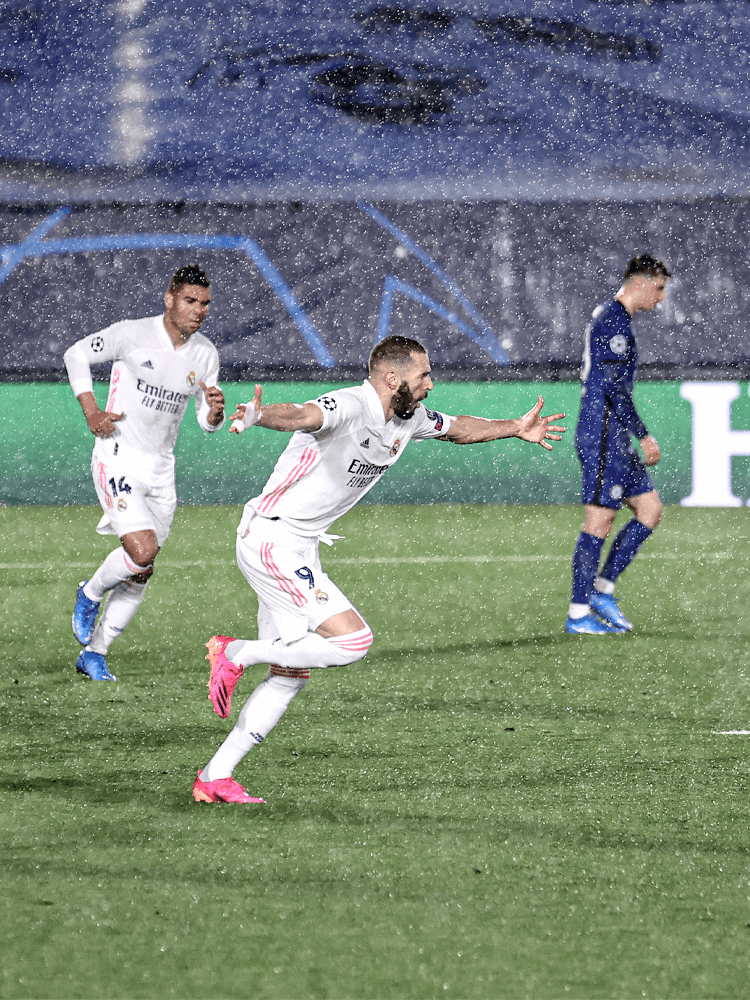 Chelsea will take a valuable away goal into the second leg of their Champions League semi final against Real Madrid after impressing in this first-leg draw. Christian Pulisic gave them the lead in the 14th minute, and though Karim Benzema's goal ensured Real were level by half-time, Chelsea remained the stronger team and perhaps even deserved victory. Their manager Thomas Tuchel, who is the only manager in the competition's history to face Real five times without losing, said: "Even if we had won here, everything is possible. It's half-time and we'll have to fight for every centimetre and every advantage that we want to have and we need to fight and deserve it." His decorated opposite number, Zinedine Zidane, said: "It’s true that we weren’t at our best in the first half. But we changed things and performed far better after the break. We faced a very quick and good side, particularly their forward players. It’s ultimately a fair result”.

Real Madrid were organised by their manager Zinedine Zidane into a 3-5-2 formation led by Karim Benzema and Vinícius Junior. Their opponents, Chelsea, defended with a 5-3-2, via mid and lower blocks.

Real started with Toni Kroos withdrawing from central midfield and into defence, usually into the left inside channel, and when he did so Marcelo moved into central midfield, Nacho Fernández advanced, and Vinícius held their attacking width. If Kroos instead adopted a position outside of Real's back three, Nacho remained in his position, and Marcelo resisted moving infield.

Vinícius retained his wide position when attacking into the final third, and aimed to combine with teammates and run inside César Azpilicueta when the wing-back had withdrawn into particularly deep territory. Marcelo supported him both from behind and by offering overlapping runs, and Karim Benzema drifted across to support Vinícius towards the left. Luka Modric, in turn, attacked through the right inside channel and often remained ahead of both Kroos and Casemiro, but there were also occasions when he withdrew into a deeper position to receive possession away from Chelsea's three central defenders.

Dani Carvajal provided Real's width on the right. With Kroos dictating their approach towards the left, Marcelo increasingly moved infield and Casemiro advanced, inviting Benzema to occupy spaces away from the ball. Though Casemiro offered little creativity from a position that often almost resembled a number 10's, his presence there meant Benzema occupying spaces where he posed an increased attacking threat.

The Frenchman's movements increasingly meant him avoiding Chelsea's two defensive midfielders – it was his volley from the second phase of a routine corner that brought Real level. His movements across Chelsea's three central defenders also proved difficult to contain; the rotations and combinations Real offered towards the left consistently offered potential.

Their attacking approach changed during the second half when their defensive structure was tweaked in an attempt to contain Chelsea's build-up play. Benzema and Vinícius operated much more like a front two when Real recovered the ball and, because their deeper defensive block encouraged Chelsea's defensive line further forwards, spaces emerged to play direct balls in behind for their front two to chase.

There were regardless still occasions when they favoured building via lengthier periods of possession, and when counters were unrealistic. Modric eventually adopted a deeper position, Carvajal overlapped on the right, Marcelo offered a variety of runs from the left, and Eden Hazard replaced Vinícius and sought to receive and dribble from the left inside channel, leaving Benzema as their lone striker. That they continued to rely on Benzema's ability to link play through midfield meant that their threat in behind was sacrificed, and a second goal eluded them.

Chelsea's manager Thomas Tuchel on this occasion favoured a 3-4-3 formation built on the double pivot provided by Jorginho and N'Golo Kanté. Real Madrid defended with a 5-3-2, via their wing-backs Dani Carvajal and Marcelo withdrawing into defence.

When they progressed possession via Mount and Pulisic, Chelsea's wing-backs attempting early crosses – when Real's had been drawn infield by the progress of Mount or Pulisic – back across goal. One-touch combinations, similarly, helped Chelsea to negate Real's attempts to press them wide, and then tempt a central defender out of position and create space in behind.

It was runs made in behind by their attacking players, and them moving to receive to feet between the lines, that led to Chelsea taking the lead. The spaces behind Real's midfield were sufficiently big that their defenders moved higher, but the movements of Chelsea's attacking players disorganised the Real defenders, and contributed to Pulisic receiving, cutting infield and providing the finishing touch.

Chelsea continued to build impressively through the pressure Real were attempting to apply, but their final ball too often undermined them – Werner, who moved off the shoulder of Real's defenders and into positions from where he could have shot across goal, was perhaps the biggest victim of that. Chelsea's combinations towards the right offered promise, and Benzema and Vinícius remained ready to counter, often via the latter alternating between operating in line with Benzema and a deeper role, both of which Chelsea adapted their build to.

When Real resisted pressing high to the same degree, Chelsea's wider central defenders became more willing to step out with the ball. The hosts' central midfielders covered passing lanes and worked to reduce spaces between the lines to limit access to Chelsea's front three, and Benzema and Vinícius screened ahead of Chelsea's defensive midfielders. Even if Chelsea's wider central defenders had more  freedom to step out with the ball, Real's compactness frustrated Chelsea.

Mount responded to that compactness by withdrawing into a deeper, wider position, and Kanté advanced to provide forward runs, but still Real's compactness and mid and lower blocks proved difficult to penetrate. The efforts of Chelsea's attacking substitutes Hakim Ziyech and Kai Havertz also came to little.