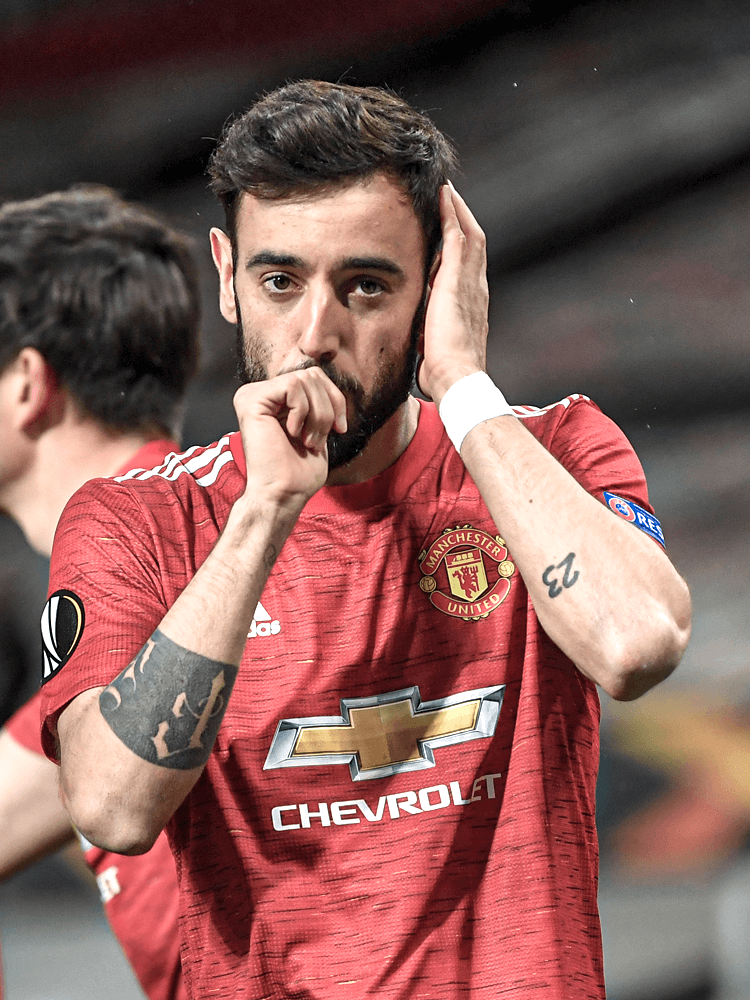 Manchester United look almost certain to reach their first major final under Ole Gunnar Solskajer after they recovered from a losing position to build the most commanding of leads to take into the second leg of their Europa League semi final with Roma. After Bruno Fernandes had given them the lead, Lorenzo Pellegrini's penalty and Edin Dzeko's finish meant Roma led at half-time. The impressive Edinson Cavani scored early in the second half, however, and they thereafter became clinical. Cavani struck again, as did Fernandes – from the penalty spot – Paul Pogba, and substitute Mason Greenwood. "The character showed that they came back and didn't lose their heads," Solskjaer said. "Maybe five or 10 minutes at the end of the first half we didn't look great, but we got ourselves together. The two goals are junior, schoolboy errors that shouldn't happen at this level." His opposite number, Paulo Fonseca, said: "We did well in the first half, but unfortunately we didn’t come back out for the second half. We were up against it a bit, because we lost three players to injury and so we couldn’t make any more substitutions."

Manchester United were organised by their manager Ole Gunnar Solskjaer into a 4-2-3-1 formation led by Edinson Cavani. Their visitors, Roma, defended with a 5-4-1, in an attempt to negate United's width.

When they progressed into the attacking half of the pitch, United sought to move the ball with few touches to frustrate Roma in their efforts to pressure the in-possession player. Aaron Wan-Bissaka and Luke Shaw advanced into attacking positions, and remained ready to cross from a deeper angle if the ball was played back to them, and their point of attack was changed via Scott McTominay and Fred.

Paul Pogba and Marcus Rashford, United's wide forwards, adopted a different line to Shaw and Wan-Bissaka, and alternated between attacking with width and through the inside channels, enhancing the fluidity that created clear passing lanes and overloads in the wide areas of the pitch. United consistently favoured attacking towards the right.

When United were attempting to build attacks, McTominay and Fred withdrew from their positions at the base of midfield into the spaces between full-back and central defender, providing both defensive security and encouraging those full-backs to attack with freedom, and to move high and wide to stretch Roma's defence. If them doing so invited Roma to apply pressure from the front, space was created for Harry Maguire and Victor Lindelöf to attempt direct balls into.

A further variation involved Rashford and Pogba withdrawing into deeper positions to create a clear passing lane with which to combine with the full-backs outside of them into the spaces they had vacated. Full-back, defensive midfielder and wide forward would support each other in quickly moving the ball and playing through Roma's midfield.

McTominay adopted a more attacking role during the second half, during which he sought to support attacks by adopting a position between Rashford and Bruno Fernandes, and by helping to create overloads against Roma's midfield. When McTominay advanced, Fred moved into a more central position to preserve United's sense of balance, and to occupy threatening positions outside of Roma's penalty area when United were attempting to finish attacks.

Shaw also sought to attack more regularly, and was supported in doing so by Pogba or Fred, who rotated positions. Pogba's frame and ability to play with so few touches similarly meant United taking advantage of space in the relevant channel before Roma were able to adjust.

United complemented their increased intensity and variety by being more clinical in front of goal. Roma, in turn, became increasingly tired, and more regularly conceded both possession and fouls, and the greater space that contributed to meant the hosts seeking to finish from both inside and outside of the penalty area.

Paulo Fonseca organised Roma into a 3-4-3 formation in which their midfield four formed a diamond that featured Gonzalo Villar, who replaced the injured Jordan Veretout in the fifth minute, at its tip and Amadou Diawara at its base. Manchester United defended with both a 4-2-3-1 and 4-4-1-1, the latter via Paul Pogba and Marcus Rashford withdrawing into deeper positions.

United sought to press into advanced territory, and to set a trap when Roma moved the ball wide that meant their full-backs moving to take their opposing wing-back as the ball was played, and arriving when that wing-back took his first touch. In the centre of the pitch, Bruno Fernandes and Edinson Cavani switched positions to pressure Roma's defence, and they were supported in doing so by Pogba or Rashford; Scott McTominay and Fred retained advanced positions and braced to make regains if Roma attempted to force the ball forwards.

When transitioning into attack, Roma moved the ball forwards with speed, in an attempt to capitalise on United's defensive shape. They targeted the spaces that existed between full-back and central defender; Leonardo Spinazzola advanced to beyond their front three to create an overload, and to encourage more attacking players into the central areas of the pitch. His relationship with Henrikh Mkhitaryan offered potential; Villar also advanced to support in the final third.

At the start of the second half, Roma committed increased numbers to advanced positions and sought to play long balls from defence and in behind United's, but they rarely succeeded, and unless they retained possession United were able to counter. There were also occasions when their defensive players attempted to drive forwards with possession and into space to draw pressure from United's midfield.

United became increasingly compact in their defensive half, and to the extent that their shape was rarely wider than the width of the penalty area. Fred and McTominay sought to limit the space between defence and midfield, and Pogba and Rashford provided further cover from behind the ball. Roma, in turn, attempted to continue to play with width, and when a wing-back was closed down they transferred the ball through midfield.

Roma's midfielders were crucial to their attempts to build and maintain possession. Their substitute Bruno Peres withdrew into a deeper position, similar to a traditional full-back, to support their three central defenders in building attacks, and his fellow midfielders moved across to provide cover and support. Diawara and Villar also formed a double pivot, to create further opportunities to play and secure possession as they moved forwards, via forward passes or carrying the ball into space.

A further approach involved attempting to play the ball in behind United's defence, where Edin Dzeko was willing to move into the channels and rotate with Mkhitaryan, who used his body shape to run across Victor Lindelöf, as the defender retreated, at an angle that made it difficult for the defender to win the ball without committing a foul. Their favoured attacking shape of a narrow front three and expansive midfield diamond created chances to play the ball in behind United; there were also occasions when Dzeko moved deeper and Mkhitarayan and Pellegrini advanced, but United's defence mostly remained organised.

They continued to attack in that same nature late into the second half. United already had a commanding lead by then, however, and withdrew players into deeper positions to screen and delay Roma's attacks.