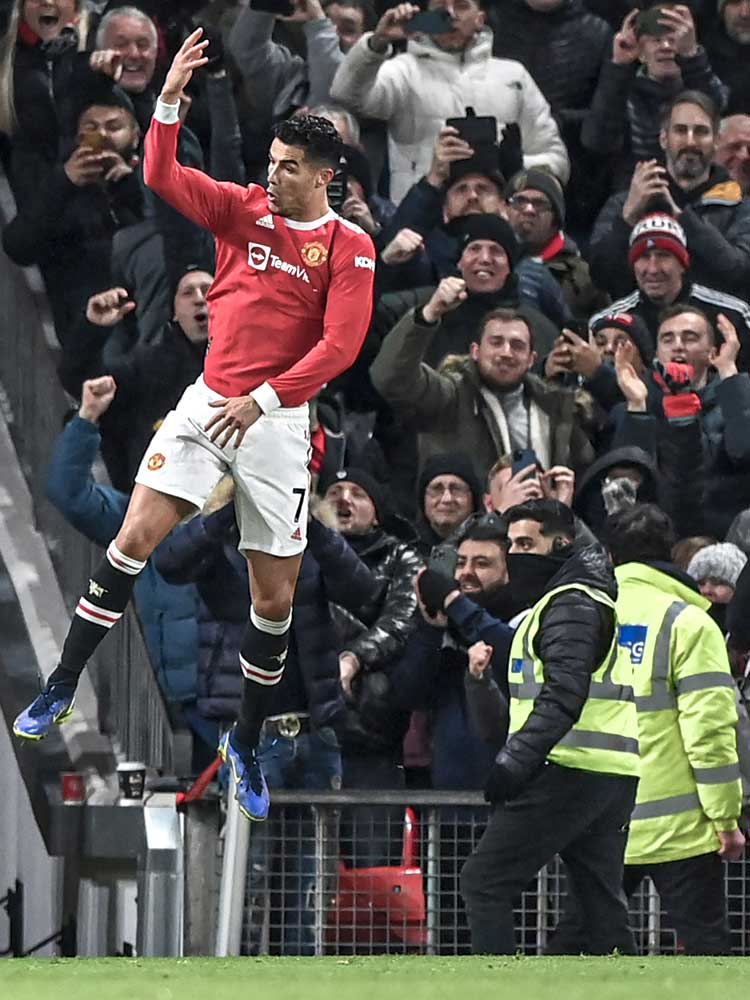 Michael Carrick signed off as Manchester United's interim manager with a deserved 3-2 victory over Arsenal that gives Ralf Rangnick a greater platform to build on. After Bruno Fernandes' strike on the stroke of half-time had cancelled out Emile Smith Rowe's opener, Cristiano Ronaldo's 800th career goal gave United the lead. He struck again from the penalty spot after Martin Odegaard had responded for Arsenal, and in doing so secured three valuable points. "I told the players to play with emotion and the atmosphere and their responsibilities to trigger it off," Carrick said. "It was like an old-school classic and hopefully the boys will go on to enjoy more nights like this in the future." Arsenal's manager Mikel Arteta said: "We started the game really good but then we gave them some momentum. We lost very simple balls. We couldn't get out of the press because we were defending deeper. In the second half we had total control and dominance but we made an error which cost us the game."

The use of triangles
From their 4-2-3-1, Manchester United formed triangles through Bruno Fernandes or Cristiano Ronaldo withdrawing into deeper, wide positions to support a full-back and wide forward (below). They used these triangles to build around the front two in Arsenal's out-of-possession 4-4-2. When Ronaldo drifted to the right he targeted Rashford's runs in behind, or looked to recycle play through the double pivot of Scott McTominay and Fred. On the left he linked with Jadon Sancho and they aimed to progress forwards directly with speed.

Attacking partnerships
When they progressed into the final third, United's full-backs and wide forwards worked together to play around Arsenal's defensive shape. Sancho mostly cut infield from the left, and left-back Alex Telles provided overlapping runs. On the right, Rashford remained wide and sought to deliver low crosses and cut-backs. Ronaldo and Fernandes took turns to withdraw to positions between the lines (below), and Fred and McTominay picked up loose balls in central midfield. In doing so they kept up the pressure on Arsenal, who were forced to defend for long periods. There were also occasions when Fernandes drifted to the right and Sancho replaced him alongside Ronaldo to preserve their numbers in central territory.

Switching play
Harry Maguire's switches of play from left to right found Rashford (below) and Dalotin the second half, and they proved effective at finding either player in behind Nuno Tavares. With Fred and McTominay still positioned centrally to fight for second balls and break up any potential counter-attack, Fred was also ready to join Fernandes and Ronaldo in attack. This was demonstrated when United scored their first goal and when Fred won the penalty that delivered their third.

Wide combinations
The same promising wide combinations witnessed during the first half also appeared during the second, when there were bigger gaps between Arsenal's midfielders that United targeted, including via movements through the inside channels. Both full-backs continued to advance to support the wide forward in front of them (below), and Ronaldo and Fernandes made themselves available to receive inside Arsenal's wide midfielders. Their wide attacks were therefore sufficiently supported, and Fred continued to provide attacking runs through the centre.

Using a midfield box
A midfield box (below) was formed from Arsenal's 4-2-3-1 via Emile Smith Rowe moving infield from the left, Martin Odegaard drifting towards the right, and Mohamed Elneny and Thomas Partey provided support underneath. Between them they created overloads against United's midfield three, and created space into which Nuno Tavares could advance from left-back. Gabriel Martinelli retained his position wide on the right, and Pierre-Emerick Aubameyang worked on the shoulder of United's central defenders. Smith Rowe and Odegaard received in the inside channels around Scott McTominay and Fred, and sought to play into Martinelli and Tavares.

Adopting a 4-3-3
There were also occasions Arsenal attacked with a 4-3-3 via Elneny dropping in behind the advancing Tavares (below). Smith Rowe continued to drift infield, and Odegaard remained in the right inside channel and Martinelli wide on the right, ensuring Arsenal had significant width and cover against potential counters, but at the expense of their midfield overload, and therefore their attacking potential.

United's aggressive press
In a potential sign of things to come under the incoming Ralf Rangnick, United regularly applied a high press (below) that involved them forcing possession wide via curved individual pressing towards the wings. With Arsenal's double pivot tightly marked by one of United's attacking players, a wide forward also moved infield, forcing Arsenal out wide in their defensive half. United's double pivot moved across with the ball, frustrating Arsenal in their attempts to play into Odegaard or Smith Rowe and therefore further forwards, leading to them attempting direct balls that United mostly won.

Potential on the right
Takehiro Tomiyasu underlapped when Martinelli held his wide position (below). Smith Rowe continued to move infield from the left, creating Arsenal's midfield box and the support Mikel Arteta desired in the centre around Aubameyang (below). Arsenal posed an increased threat when attacking down the right, so United responded with both wide forwards and Fernandes working back to adopt deeper defensive positions as a low block was formed. Arsenal's midfield box probed, but struggled to penetrate forwards, making their combinations on the right their most effective route forwards.