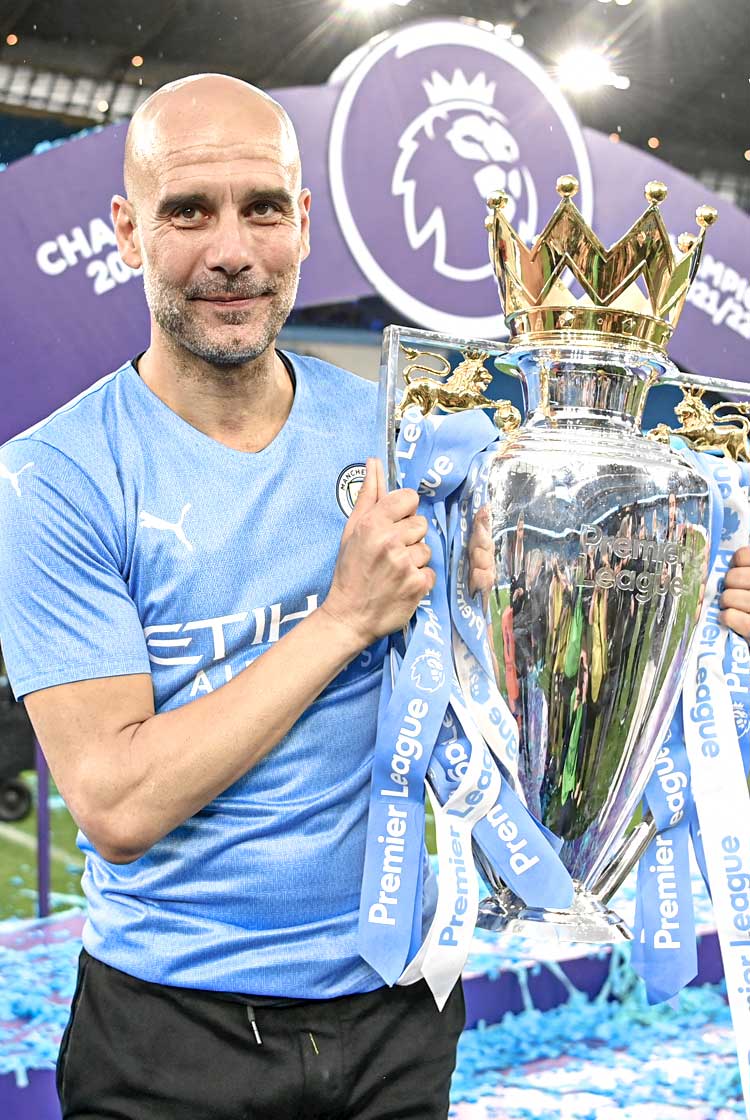 Manchester City wrapped up a fourth Premier League title in five years in the most dramatic fashion, with three goals in six minutes at the end of this game turning the title race on its head. After Matty Cash and Philippe Coutinho had sent Aston Villa into a barley believable 2-0 lead, Villa manager Steven Gerrard's former club Liverpool had their fate in their own hands, requiring a win over Wolves to go top of the table. With 15 minutes to go, Liverpool were drawing 1-1 and only required one goal to overtake City, but then came the City onslaught. Three goals in an astonishing Ilkay Gündogan-inspired blitz sent the Etihad into raptures, and City saw out the remaining minutes to hold off Liverpool – who scored two late goals to beat Wolves – and win the title once again.

Afterwards, City manager Pep Guardiola called it his "best" Premier League win yet. “Four Premier Leagues – these guys are legends already," he said. "This group of players are absolutely eternal in this club because what we achieved is so difficult. First one 100 points [in 2017/18], second one in Brighton [final day, 2018/19], the third without people and this one with people [is] the best."

Guardiola went on to praise Liverpool, who he said pushed his side to new heights: "I want to congratulate Liverpool for what they’ve done. The magnitude of our achievement is because of the magnitude of this rival. That makes us feel more proud because we know which team we face and we are incredibly happy."

Pep Guardiola set Manchester City up in a 4-3-3 formation, which came up against an Aston Villa side that looked to protect the middle of the pitch and force City wide. City’s shape aimed to get Phil Foden and Riyad Mahrez into 1v1 situations out wide, while Gabriel Jesus stretched the pitch to create space in between the lines for Kevin De Bruyne (below). Rodri and Silva played slightly deeper in midfield, providing quality on the ball but also security against counter-attacks. Mahrez generally stayed high and wide on the right, with John Stones – a centre-back by trade – playing cautiously at right-back. This allowed De Bruyne to roam into the right half-space and operate much higher than the other members of the midfield unit. On the left side, Foden often moved infield, with João Cancelo advancing on the outside.

In the early stages of the game, Villa did a very good job of protecting the middle of the pitch and restricting access to De Bruyne. They did this through the midfield three and front three maintaining compact distances vertically and horizontally to allow play in front of them and show play around the outside. City tried to manipulate the Villa midfield with rotations that aimed to ultimately find De Bruyne in space.

The below image shows Mahrez making a run in behind and dragging Villa left-back Lucas Digne with him. Rodri has dropped into a deeper position and will be engaged by Philippe Coutinho when he receives the ball, opening up space for Stones to receive. Stones is then engaged by Jacob Ramsey, which acts as the trigger for De Bruyne to move out of the shadows and into a position to receive between the lines.

Initially, Villa managed these situations well: when the ball went wide and Ramsey engaged, Coutinho dropped in to screen De Bruyne, allowing number six Douglas Luiz to move across and mark De Bruyne. However, as the game went on and City increased the intensity of their play, Villa engaged the ball less effectively, and the speed of their actions slowed as they tired. This allowed City to get into more advanced positions more frequently.

Why the wide areas were key

City demonstrated a clear plan in the final third that ultimately won them the game. They aimed to use penetrative runs to slide the ball on the outside and whip the ball across goal – a move typical of Guardiola’s City. They required three attacking runners in the middle – one across the front post, one in the middle of the goal, and one towards the back post – while having three players around the edge of the box to sustain the attack, be available for cut-backs, and counter-press should possession be lost (below). The half-time switch of Oleksandr Zinchenko for Fernandinho and Cancelo moving to right-back gave City better balance out wide, and meant they could deliver earlier and more accurate crosses.

Much was made of Ilkay Gündogan’s introduction, with the German scoring two crucial goals – but in truth, City's game plan didn't change after he came on. He did, however, add runs into the box from a midfield position rather than the far-side full-back making them from out wide. His two goals were examples of crosses finding runs made to the back post, while Rodri’s goal was from a cut-back on the left. With Villa having protected the middle of the pitch well throughout the match, it was unsurprising that City’s goals came from wide areas.

Steven Gerrard set Aston Villa up in a 4-3-3 formation (below). City pressed Villa aggressively and tried to lock play outside where possible. Villa’s centre-backs were pressed by Phil Foden and Riyad Mahrez, who aimed to block off the full-back on their side, while Gabriel Jesus occupied Douglas Luiz in the middle. This allowed Kevin De Bruyne and Bernardo Silva to pick up John McGinn and Jacob Ramsey, while Rodri could move into the ball-side half-space in case Emi Buendía or Philippe Coutinho moved inside. Villa tried to build from the back but suffered several losses of possession in their own half, which led to City chances.

Villa’s 4-3-3 was designed with Coutinho and Buendia operating more as narrow 10s than as wide attackers, staying close to Watkins. This allowed Matty Cash and Lucas Digne to get forwards regularly, and they combined for Villa’s first goal.

As is often the case when teams visit the Etihad, Villa broke quickly to try and take advantage of City’s advanced position in possession. The narrow positions of Buendia and Coutinho pulled City’s defence into the centre of the pitch, creating lots of space on the outside for Cash and Digne to move into. As City usually had their two centre-backs, double pivot and a full-back behind the ball as they attacked, they had plenty of security in defence. However, when Villa countered with their front three, two full-backs and an advancing midfielder, they were able to overload City on transition (below).

As the game progressed, City committed even more men forward and were even more vulnerable to counter-attacks. However, Villa’s decision-making and the execution of their passes was not consistently good enough and several promising breaks came to nothing.

The most promising aspect of the game for Villa was the 1v1 battle between Ollie Watkins and Fernandinho. Villa wanted to build out where possible, but sometimes, after one or two short passes, they chose to send direct balls up the pitch that eliminated City’s first two lines. Watkins had the beating of Fernandinho in the air, and would then use Coutinho and Buendía to continue the attack. Watkins could also flick the ball beyond for an advanced run from deep; one of those flicks led to Villa’s second goal.

This simple strategy caused City major issues in the first half, and Villa could have caused even more damage than they did. Again, the quality of their execution around the penalty area let them down. Watkins was a constant threat, and Villa might well have been out of sight had they taken the chances he helped create.