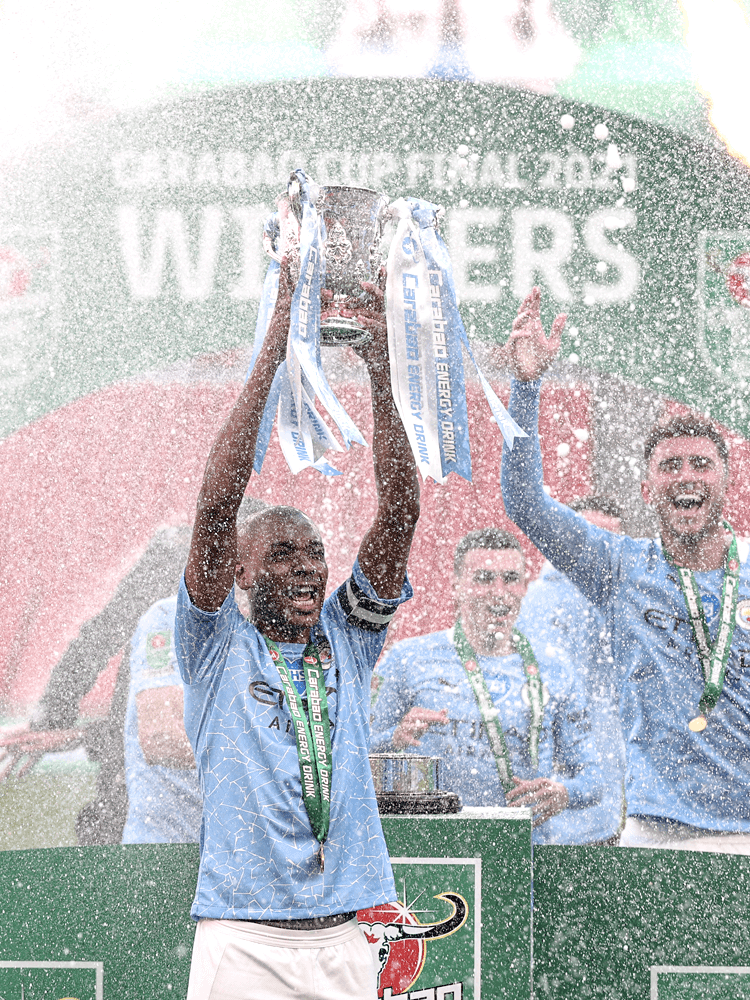 Manchester City won the League Cup for a record-equalling fourth successive time when their dominance over Tottenham was eventually rewarded with Aymeric Laporte's 82nd-minute header. Pep Guardiola's team, so recently eliminated from the FA Cup, therefore remain on course for an impressive treble, and in delivering Guardiola's 25th major trophy in management, also made him the first manager to win the competition in four successive years. "It means consistency in the team to be there," the Spaniard said. "We beat Arsenal and Manchester United on the way so we can say we deserved to win this competition. The way we played was fantastic and it's nice when you win a title. The most impressive thing is in the last 33 games we won 30." His opposite number Ryan Mason, at 29 years and 316 days becoming the youngest person to manage a team in the competition's final, having recently succeeded José Mourinho on an interim basis, said: "They gave absolutely everything. City are a great side, an incredible team, but our group gave everything with what they have had to deal with in seven days. That is something to be proud of."

Manchester City were organised by their manager Pep Guardiola into a particularly fluid 3-2-5 formation in which Fernandinho and Ilkay Gündogan formed their double pivot. Their opponents, Tottenham, defended with a 4-3-3.

City dominated possession throughout the first half, and threatened to score every time they progressed into the final third. Against that, when they built from the back, Spurs defended with a mid-block and instructed their front three to attempt to contain City's two central midfielders and back three. In turn, when City fed the ball to their widest players, one of Spurs' central midfielders moved to press him, and the ball-side attacker tucked in in an attempt to preserve their compact shape and prevent City from playing infield – a demanding pursuit that required a swift reaction and that proved difficult to maintain for 90 minutes. By first drawing an attacker into pressing a central defender, City spread out to give that attacker an increased distance to cover, and then played to a midfielder who had moved beyond the line of pressure. Spurs' remaining midfielders struggled to prevent City from doing so because they were committed to protecting the back four behind them.

Some of their best chances were created via Raheem Sterling and Riyad Mahrez attacking one-on-one against their opposing full-backs. Their fluid shape also meant that different players adopted different positions; a common rotation involved Gündogan advancing, Sterling drifting wide, and João Cancelo moving into midfield. City mostly retained two players in front of their back three to provide security against counters, but there were even occasions when Fernandinho advanced with the ball and their shape instead resembled a 3-1-6.

The second half involved similar themes to the first, but without City being quite as dominant as they were. Sterling repeatedly troubled Serge Aurier, both when attacking him one-on-one and via the runs he made in behind, where he became a consistent target. It was a clumsy and unnecessary foul committed by Aurier that conceded a set-piece, and ultimately led to Aymeric Laporte's headed goal.

Moussa Sissoko was at fault when Laporte scored. He allowed the defender to gain an advantage on him with his run up, and didn't detect where his run was coming from, when affecting his momentum could have stopped him scoring.

On the occasion of his first fixture overseeing Tottenham's first team, Ryan Mason used a 4-3-3 formation in which he recalled Harry Winks, who featured in a midfield three alongside Pierre-Emile Hojbjerg and Giovani Lo Celso. Their opponents, Manchester City, defended with a 4-4-2 led by Phil Foden and Kevin De Bruyne.

Spurs had too little time on the ball, and as a consequence recorded only two shots on goal. They struggled to play out from defence during the first half, when De Bruyne and Foden pressed central defenders Toby Alderweireld and Eric Dier, and attempted to screen Hojbjerg and Winks. Fernandinho and Ilkay Gündogan were also positioned closely behind them, and Raheem Sterling and Riyad Mahrez adopted narrow positions around them, undermining their creative potential, and moved to press their opposing full-backs if Spurs attempted to play with width.

City's success in limiting their options forced Hugo Lloris to kick long, but the aerial dominance of Aymeric Laporte and Rúben Dias as well as City regularly taking the second balls meant that him doing so came to little. Hojbjerg therefore moved into a false full-back position to enhance their attempts to build with width, and Lo Celso withdrew into deeper territory to receive, finally giving Spurs a method of beating City's press and progressing into the attacking half.

Spurs were content to have little possession, and to attack on the counter, where Son Heung-min and Lucas Moura offered potential, but City's experience and game management during moments of transition meant them committing tactical fouls. Laporte committed several, and perhaps should have been sent off. A further issue for Spurs was their indecision and hesitancy, and the poor quality of their execution around the penalty area.

In the second half, Gareth Bale, on as a substitute, and Son remain advanced and often wide, and Harry Kane withdrew to operate as an attacking midfielder alongside Moussa Sissoko, a further substitute, to create a box and attempt to create overloads in midfield and to restrict City's back four. Counters, particularly given Sissoko offers a greater threat during transitions than does Lo Celso, continued to represent their greatest hopes of scoring, but chances still eluded them.