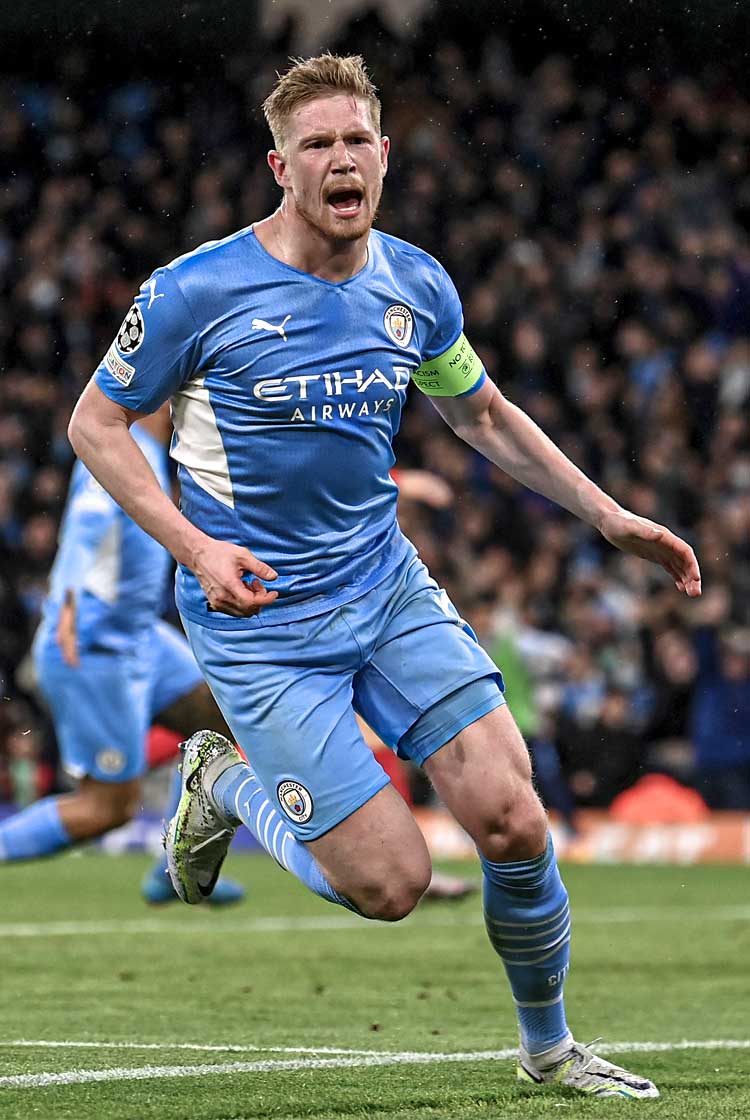 In a clash of footballing styles in this Champions League quarter final, Pep Guardiola's Manchester City came out on top against Diego Simeone and Atlético Madrid. It was no surprise to see City dominate the ball and Atlético drop into a low block for long periods, but the home side remained patient with their possession-based game and eventually ground their obdurate opponents down. It took a moment of magic from substitute Phil Foden to slip a pass through the visitors' defence for Kevin De Bruyne to run in on goal and slide a finish past Jan Oblak. However, for all of City's possession, they struggled to create any more clear-cut chances. The tie remains in the balance going into the second leg in Spain.

City manager Guardiola was hugely impressed with Foden's contribution. "Phil has a special quality," he said. "His space in the first steps are massive and he had the composure to make an incredible assist to Kevin."

Simeone, meanwhile, insisted that his team are very much still in the tie. "City might be the best side in the world," he said. "We'll change how we play a little in the second half of this tie, but it's all the same to them – City will play the same way. But with humility and hard work, we'll compete. Then we'll just see where that takes us."

Manchester City used a 4-3-3 shape in attack, while the visitors set up in a very low 5-3-2 block. João Cancelo pushed into midfield from right-back to form a double pivot with Rodri, while Ilkay Gündogan moved out to the left (below). Cancelo and Gündogan provided a link to the two wingers, Raheem Sterling and Riyad Mahrez, who provided City's width. The midfield line of three helped cover against transitions into Atlético Madrid’s two centre-forwards whenever the visitors regained the ball. Kevin De Bruyne often joined Bernardo Silva between the lines, with the aim of threatening the space around and in the gaps between Atlético’s three centre-backs.

Struggles in the inside channels

With Atlético defending in a very compact low block, City struggled to progress through the centre or in the inside channels – areas where they are usually so dominant. Atlético’s wing-backs jumped out to close down Sterling and Mahrez when they received the ball, safe in the knowledge that there was cover behind them from the extra centre-back (below). This centre-back also tracked any runs through the inside channel runs by City's number eights, De Bruyne and Gündogan. Koke, the central player in Atlético’s second line, often dropped into the back line when the wing-back had moved out wide, with the rest of the central midfield moving across to limit City’s access back inside.

Midway through the first half, Simeone changed his side’s block into two distinct units of five, with forwards Antoine Griezmann and João Félix defending alongside the midfield three (below). This meant that whenever City had several players between the lines, it was very difficult to access them. As a result, City could not progress through the middle, but they remained patient with their wider play before probing back inside.

Atlético changed to a 5-4-1 out-of-possession shape for the second half, and City chose to match their opponents' shape. Centre-back John Stones and left-back Nathan Aké moved into midfield alongside Gündogan and Rodri, while Aymeric Laporte stayed back as the last line of defence in a sweeper role (below). Cancelo pushed much higher to provide the width on the right, while Silva moved out to the left in what was now a front five. Sterling replaced Silva as the centre-forward, and provided more runs in behind. This in turn increased the space between the lines for Mahrez and De Bruyne to receive.

It was only once Guardiola set City up with three distinct number 10s that they provided a genuine threat to Atlético’s stubborn block. Gabriel Jesus came on up front and stayed high to pin the visitors' middle centre-back, with Jack Grealish and Cancelo occupying the wing-backs. De Bruyne, Phil Foden and Silva took up positions in the gaps in Atlético's midfield line of four (below), providing vertical passing options for the deeper players. Atlético’s two remaining centre-backs couldn’t jump out to cover all three of City’s 10s; the only goal of the game came from De Bruyne and Foden overloading and then combining around Atlético's left centre-back.

Atlético Madrid initially attacked in a 3-5-2 against City’s 4-4-2 defensive shape, but the hosts consistently won the ball back so quickly after Atlético regained possession that there were very few moments in which this shape was apparent. Once they had adapted their defensive structure into the 5-5-0 block mentioned above, they found it easier to access their two forwards, who were now positioned out wide (below). On the right, Antoine Griezmann worked around Nathan Aké and was occasionally supported by Marcos Llorente, while João Félix moved beyond the hosts' centre-backs on the left.

In the rare moments when Atlético maintained possession, left wing-back Renan Lodi pushed up high to form a midfield four. With Félix and Griezmann working as a two up front, Atlético converted into a 4-4-2 (below). Llorente provided forward runs where possible, moving from a number-eight position to provide a high presence on the right, leaving Koke and Geoffrey Kondogbia as a double pivot in midfield. The aim was to build around City’s 4-4-2 with a wide back four.

Simeone changed both his attacking and defensive shapes as the game went on, but Llorente’s forward runs were a consistent threat to the space around Aké. In the second half, these runs came as Llorente moved inside, with Atlético converting into an in-possession 3-4-3, with Sime Vrsaljko now higher up (below). Llorente's direct runs forced City's defence back, allowing one of Griezmann or Félix to drop and receive between the lines. However, despite the persistence of Llorente’s runs, Atlético struggled once they reached the final third. Even a string of substitutions from Simeone failed to provide any return, as Atlético ended the game without having had a single shot.