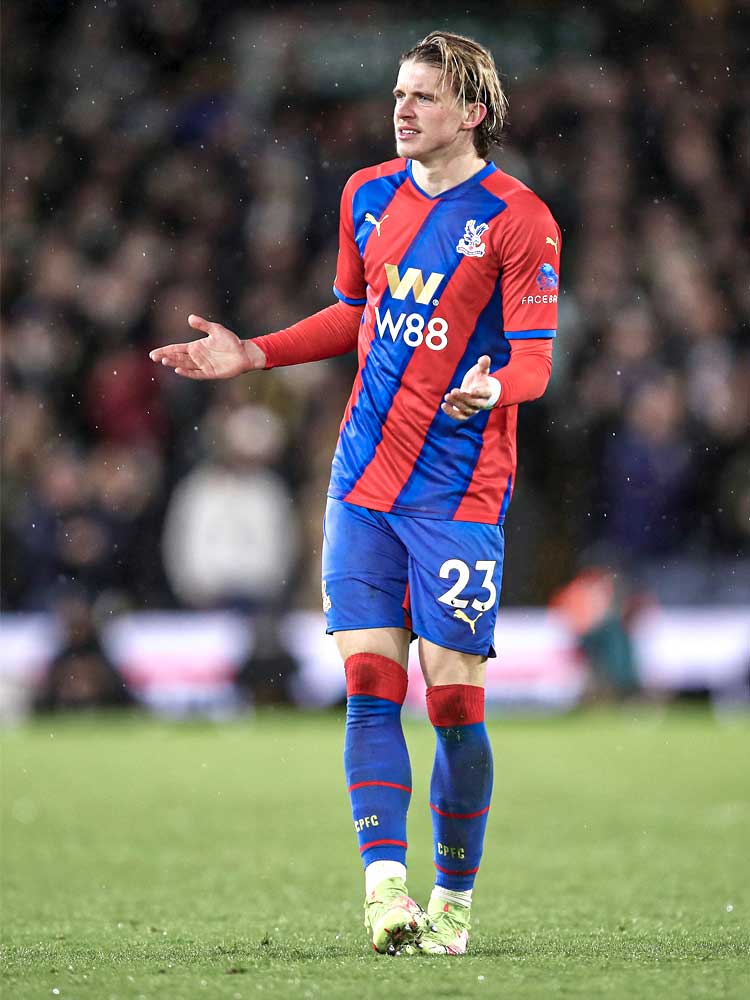 Profile
Conor Gallagher's performances at Crystal Palace have established him as one of the most promising of English football's latest generation of cultured players. Having previously impressed on loan from Chelsea to Charlton, Swansea City and West Brom, it is under the guidance of Patrick Vieira – one of the Premier League's greatest midfielders – at Palace that he has produced his finest football to date.

Lee Bowyer, another midfielder who played international football, managed him at Charlton, and as far back as October 2019 said of the then-19-year-old Gallagher:  "Whatever you tell him he does and I just keep encouraging him to get in the box – and things are falling for him. His willingness and work-rate are unreal. He’s still learning though – he needs to learn – but he’s been a great addition."

Tactical analysis
The right-footed Gallagher is capable of playing numerous central midfield roles. With the ball at his feet in the final third he is admirably composed, and impresses via the decision-making that determines for how long he retains the ball, and which teammate to play it to. He regularly draws opponents to towards the ball to create space for others to receive in (below), and proves particularly effective when doing so as a number 10, because of the extent to which other attacking players have been bought time to adopt new positions.

Those instincts are complemented by the detail of his passing that means he delivers the ball to encourage specific actions from the target of his pass; should a potential shooting opportunity exist, he manages the speed of his pass to release it at a suitable tempo and invite his teammate to shoot. If he instead needs to cross the ball, turn, or set it back, he will play at a different speed, and one influenced by his awareness of the opposition's defenders and where potential spaces may emerge.

For all that he favours his right foot, Gallagher uses different parts of his foot to play the ball and take it away from pressure. Shots mostly come from his right foot – typically with power from the edge of the penalty area, or while on the move after making a supporting run through central territory to penetrate forwards to alongside a striker. If he can learn to use his left foot more regularly, he could regardless offer an increased variety of pass.

He is likelier to dribble with the ball when in a deeper position (below), and to do so to escape pressure instead of as a favoured method of progressing possession. His agility makes him capable of turning in both directions, but his preference to play off of his right foot – a drop of the shoulder and burst in that direction is a recognisable trait – can lead to him turning backwards instead of using his left. From a standing start he can move similarly well before using an impressive change of pace to escape opponents; even if he is short of the speed some of his contemporaries can offer over lengthier distances, those initial explosive movements often mean him losing markers, in turn enhancing his control.

The consistency of his decision-making makes Gallagher as effective at securing possession as he is at switching play or breaking lines via passing or dribbling. If there is little need for him to dribble from a deeper midfield position, he is capable of linking play from defence to attack, and of contributing to building possession in deeper territory – where he often reveals a simpler game that involves shorter passes to control the ball, progress around opposing defensive blocks, and play into those in wide positions.

When he is required to press, Gallagher does so with aggression, and he is also willing to duel (below) and compete for the ball against any profile of opponent. His agility means he can change direction when pressing, and he can do so while accelerating to reach an opponent, but he needs to become as effective at decelerating to slow down at the correct time – particularly when approaching nimble targets. His work ethic, regardless, is admirable, and extends to covering teammates by tracking back across the pitch and then duelling, engaging, or attempting tackles.

Role at Crystal Palace
During his time on loan at Selhurst Park, Gallagher has most consistently featured as the number 10 in a 4-2-3-1 (below) or as an attacking central midfielder in a 4-3-3. Palace typically attempt few crosses, and instead rely heavily on combinations through central territory; from the left, Tyrick Mitchell overlaps from full-back and Wilfried Zaha moves infield, to where he is supported by Mitchell and Gallagher as he seeks to feed either Christian Benteke or Odsonne Édouard.

At attacks towards the right Gallagher moves into the right inside channel to support from inside of, most commonly, Jordan Ayew, who remains wider for longer than doez Zaha. Underlapping runs are regardless occasionally made from their right-back, or one of their defensive midfielders, which contributes to Gallagher drifting to wider on the right and contributing from that wider territory, and therefore others instead attacking through the inside channel – potentially while he crosses the ball.

Gallagher's presence between the lines and around Zaha has ensured they often create the most key passes for Palace. Zaha also moves into withdrawn positions to receive the ball and then attempt to dribble forwards and, when he does so, Gallagher adopts more advanced positions to attack as a second striker and move in behind or across the opposition's defence.

Benteke or Édouard, their senior strikers, commmonly occupy both opposing central defenders, enhancing Gallagher's ability to find spaces in the centre. It is common for direct passes to be played to Benteke, and therefore for Gallagher, typically alongside Zaha, to target the second phase of possession and support from alongside Zaha as he moves infield. When he does so he shows sound timing to match the flight of the ball, and the instinct to be braced to shoot on goal.

When Palace are instead organised into a 4-3-3 (above), Gallagher can be seen withdrawing into a deeper position to contribute to the formation of a double pivot and to possession being built into midfield – particularly if Palace are confronted with an aggressive and consistent press. Also in contrast to their 4-2-3-1, he almost always attacks through the right inside channel and supports from inside of their right-sided forward.

Given, towards the left, similar rotations to those that are a feature of their 4-2-3-1 unfold, Zaha is less likely to withdraw to take the ball and instead moves closer to Palace's striker, in turn increasing Gallagher's freedom to run though the inside channels and beyond, or across the pitch and to between the lines. When possession progresses into the final third, Gallagher is given further freedom to adopt different positions, encouraging him to receive and seek to directly attack on goal, or to draw defensive pressure before releasing a teammate.