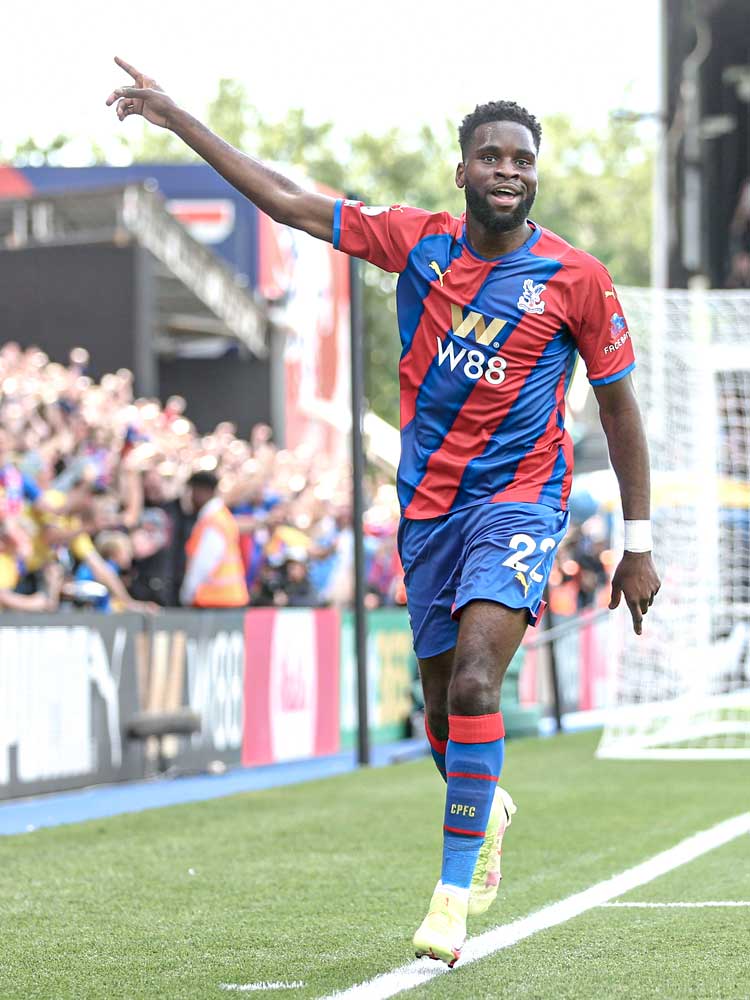 Profile
In coming off the bench to score two goals on the most influential of debuts for Crystal Palace, Odsonne Édouard demonstrated why he has long been expected to become the latest player from the Scottish Premiership to excel in one of Europe's biggest leagues. The long-term successor at Celtic to Moussa Dembélé, in Palace, Édouard also arrived at a club long without a prolific goalscorer.

Signed aged 23 for £14m in August 2021, Édouard was familiar to Patrick Vieira – the successor at Selhurst Park to Roy Hodgson – from his time with France Under-21s. "Odsonne can play with his back against the goal, he can hold the ball, he can run in behind," Vieira said. "He’s a really interesting player with experience at European level."

Tactical analysis
Édouard favours his right foot, but he is also a capable finisher with his left, and has therefore demonstrated a wide variety of techniques to score (below) with both feet that includes both powerful drives and more delicate touches. That same variety extends to his movements, which involve him withdrawing into deeper territory as often as he runs in behind and through on goal like a traditional striker.

When advancing in behind his upper-body strength is significant in him holding off opposing defenders, and his explosive pace complements him doing so regardless of whether he has the ball. That he can then slow down and compose himself – perhaps against increased defensive pressure or if confronted by a goalkeeper – or change direction effectively to create new angles to shoot at goal enhances that variety.

When withdrawing away from opposing defenders and towards the ball, Édouard adopts effective positions in which to receive it. He subtly drifts away from his marker to receive between the lines and then create opportunities to shoot at goal, potentially from outside of the penalty area. If his back is instead to goal (below) he can retain the ball and then roll infield in an attempt to shoot as early as possible.

He remains as focused on creating potential goalscoring opportunites when he drifts wider to occupy the inside channels, from where his ability to disguise doing so, and his composure, impresses; instead of rushing his execution, he favours placing his attempts into the corners of the goal. That same composure also exists inside the penalty area, where he often successfully moves the ball away from pressure, and which proves particulalry valuable against compact low blocks or emergency defending.

Those same movements into deeper territory (below) are also occasionally followed by Édouard linking with teammates offering supporting runs, even if his priority often remains to instead shoot at goal. His awareness means that those forward runs register with him, often leading to incisive, third-man combinations and early releases of possession to encourage those teammates to penetrate in behind.

Runs into or through wider territory, similarly, help to create goalscoring chances for those around him. Instead of bouncing the ball into the third man running centrally, movements in wider positions can lead to opportunities from which to cross, when he is effective at delivering low, driven efforts, and at curving his runs around the outside of his opposing defenders.

Role at Celtic
Édouard consistently featured in a front two at Celtic across 2020/21, when their preferred shapes were a four-diamond-two (below) and a 3-5-2 in which Albian Ajeti, Leigh Griffiths and Mohamed Elyounoussi were likeliest to feature alongside him. From within a front two, he made an increased number of runs through wide territory and in behind, particularly doing so when those in central midfield had withdrawn into deeper positions or drifted wide. When their full-backs resisted advancing, Édouard's runs around his opposing central defenders contributed to Celtic penetrating in behind their opponents and to feeding his fellow striker.

In both systems David Turnbull often featured as their number 10, from where he also offered attacking support; Ryan Christie, Callum McGregor and Tom Rogic were their senior central midfielders, and both moved from the inside channels and provided their width when they evolved to attack with a 4-1-3-2. With their sole defensive midfielder targeting either the midfielders in front of him or their front two, the striker alongside Édouard made similar runs in behind, potentially wide, contributing to Édouard instead being the striker to receive in the centre or offer secondary support.

Instead of being the player to provide the cross, Édouard represented their leading goal threat, both when crosses were being delivered and via combinations through central territory, potentially when the runs of his strike partner represented decoy movements. In both circumstances, Édouard was encouraged to isolate his opposing central defender before attacking crosses or receiving between the lines, and ultimately to shoot at goal. Further combinations with Turnbull, and rotations between Turnbull and their other central midfielders to create passing lanes into Édouard, also proved effective.

On the occasions Celtic were instead organised into a 4-2-3-1 (below), Édouard featured as their lone striker. Their full-backs instead contributed to their attacking width, their wide forwards attacked infield, and Turnbull relished his increased freedom. The existence of a double pivot also invited both full-backs to consistently advance, and therefore both wide forwards to move infield.

The movements unfolding behind him meant that Édouard remained in central territory for significantly longer, and that there was an increased responsibility on him to withdraw away from their opposing central defenders to link with Turnbull or the wide forwards outside of him. Their narrow attack also offered rotations to encourage Édouard to move in behind, and to target crosses being delivered by their full-backs, and direct passes from those at the base of midfield.

In receiving an increased number of goalscoring chances, there was also a reduced emphasis on Édouard to create for others. He instead largely remained central, from where he posed his greatest threat on goal, and was more capable of creating for himself.