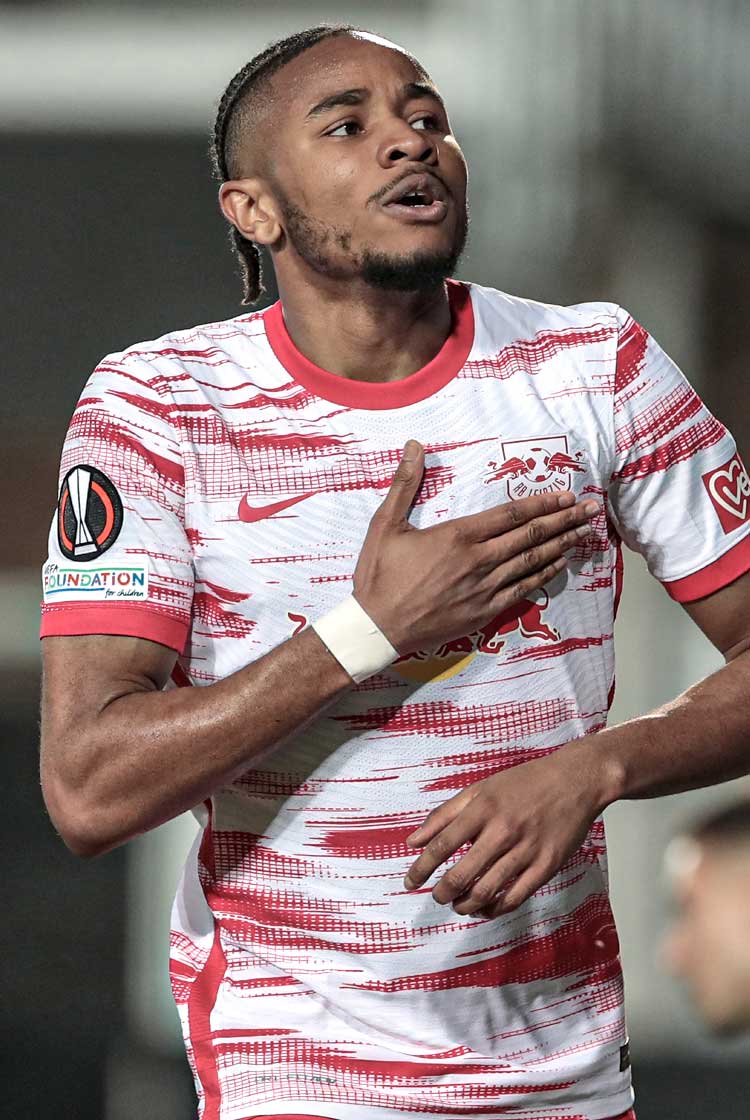 Christopher Nkunku has played his way into the gossip columns all over Europe with an exceptional 2021/22 campaign with RB Leipzig. The Frenchman started out as a central midfielder earlier in his career, but has developed into one of the most dangerous and sought-after centre-forwards around, with a whole host of top clubs linked with a move for him. Double figures for both goals and assists in Bundesliga games in 2021/22, and another 10 in European games, has led to both a great deal of transfer speculation and also international caps for France.

"He’s now a national team player, that’s important," said RB Leipzig manager Domenico Tedesco. "A few weeks ago there was one or two other voices saying that if you want to become a French international you have to change clubs, go somewhere to the next bigger club. We have now contradicted that."

Nkunku is a right-footed attacker who can play centrally or out wide. His best attribute is his dribbling, and he is extremely good at finding his way through a press and getting out of tight spaces. When receiving, he often keeps the ball close with his first touch, unless there is a particularly inviting space to push the ball into. This small first touch is taken with the aim of drawing opponents towards the ball for Nkunku to then beat.

This approach helps create space for Nkunku to drive into. He uses his fantastic acceleration – particularly from a static start – to drive past defenders. As he also possesses good upper-body strength, he will often burst across an opponent, getting his body between defender and ball, and holding them off as he advances (below). He is most effective at attacking transitions, when moving the ball forward as directly and quickly as possible is more important.

When looking to break down a more set block, Nkunku will change his approach slightly, using body feints, step-overs and jinks to dribble around opponents. His upper-body strength is still of use here, to push past an opponent where necessary.

He will carry the ball where possible, but his decision-making when it comes to releasing the ball is also impressive. He is effective when dragging a defender out of the back line and spotting a moment to slide an opponent in on goal (below). The development of that side of his game has come through playing in a central position high up the pitch for RB Leipzig, where he has proven his ability to break lines with through balls. He does this particularly well on transition, where he can release teammates into space on the break.

His chance-creation and assist numbers have increased as a result of his improved awareness as he gains more experience in an advanced role. With his back to goal, Nkunku has shown he can link play effectively with first-time knockdowns, flicks, sets and balls around the corner. As he can also run in behind himself, he gives opposition defences a lot to think about: he can stretch them and threaten the space beyond, or turn to face the ball and receive with his back to goal. This movement also helps create space for a strike partner to exploit; if the two players are co-ordinated in making opposite movements, they can be very effective. Although Nkunku often plays in a central role, he rarely sticks to his position, almost constantly offering rotations with teammates.

Nkunku has added even more goal threat to his game in recent seasons in a more advanced role for Leipzig. He is effective when opening up his body to finish with his instep having run in behind, usually preferring to do so through the left inside channel before finishing across goal. He takes advantage of rotations in the front line to provide the main threat in behind the opposition. His goalscoring numbers in 2021/22 prove just how dangerous and clinical he is.

Started off as a number eight

Under Unai Emery at Paris Saint-Germain, Nkunku was used as a number eight in a 4-3-3. He was crucial to the overlapping full-backs getting forward, as Emery’s side attacked with a very narrow front three. Nkunku worked on the inside of Layvin Kurzawa (below) or Yuri Berchiche, where he first demonstrated his ability to break lines with through balls and draw opponents out of position with his dribbling. He also showed impressive vision and switched play effectively to the right, where the opposite full-back would push forward.

From a deep position, Nkunku could drive forward with the ball to carry his team up the pitch. He would also dribble across the pitch and combine with the far-side inside forward, who had moved inside the pitch.

Thomas Tuchel then also used Nkunku as a number eight, but he did not stick so steadfastly to a 4-3-3, and it was much the same – initially, at least – under Julian Nagelsmann at RB Leipzig. Nkunku was given more licence to dribble forward and attack under those coaches. The first signs of the attacker we have come to know were appearing, but he was still usually involved in the phase before the attack, rather than finishing or creating chances.

Moved into the front line

Nagelsmann saw the attacking potential in Nkunku, and before long he was moved into the front line, first playing on the left of the attack. Under Nagelsmann, Nkunku improved his ability to run beyond the opposition’s defence, as well his combination play in wide areas. He also became increasingly effective at cutting in from the flank and sliding balls through for runners through the centre of the pitch.

In 2021/22, under Domenico Tedesco, Nkunku came to play in a more permanent central role, often staying much higher in attack. Leipzig continued to play in the 4-2-3-1 and 3-5-2 shapes that Nagelsmann used, but Nkunku played in the front line. He is best when paired with a strike partner, running in behind more often and working off the movements of André Silva (above) or Yussuf Poulsen to get into goalscoring positions more frequently.

When Leipzig played in a 4-2-3-1, Nkunku rotated with the number 10. As well as threatening the space in behind the opposition, he is happy to come looking for the ball, turn and drive towards the defence. From these positions, he used the skills he learned when playing as a number eight; here, his decision-making, vision and creativity come to good use.

Nkunku is a well-rounded forward who now scores and creates in almost equal measure. His versatility and broad skillset will be of huge benefit to whichever club he ends up moving to.