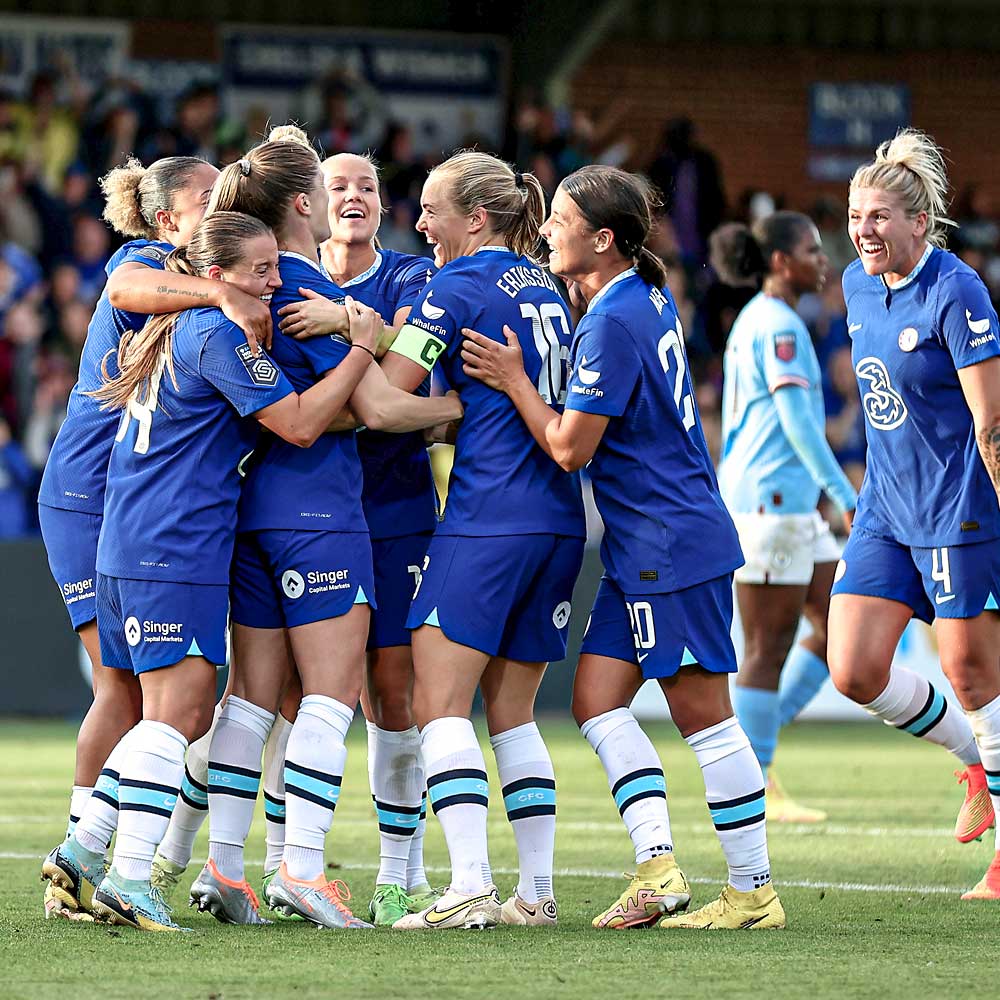 Chelsea followed up the disappointment of their opening-day defeat to Liverpool by beating Manchester City despite an at-times unconvincing display. Emma Hayes' reigning champions beat the side that finished third in 2021/22 through a goal on the counter from Fran Kirby and a late Maren Mjelde penalty. However, City had much the better of the game, and on another day might well have come out on top. Their pressing caused Chelsea, who have started this season slowly, all sorts of problems.

Hayes admitted that her team was fortunate to win. "We overplayed and kept playing ourselves into trouble – we were playing out from the back in every situation and gave City the best chances," she said. "We were a bit tentative. Today was like the season-opener. It looked like two teams that haven't got any momentum, and sometimes that takes time."

Kerr’s runs in behind

Chelsea set up in a 4-2-3-1 formation, with Australian international Sam Kerr starting as the centre-forward. Full-backs Magdalena Eriksson and Maren Mjelde looked to adopt high positions when Chelsea were in possession, using the full width of the pitch and aiming to draw Manchester City out of their compact shape.

Kerr was a key outlet throughout, frequently attacking the space in behind and looking to get on the end of through balls from the Chelsea midfield. Adopting a position between a full-back and centre-back (below), Kerr was a constant threat.

City withdrew in to a 4-5-1 formation out of possession, with wide forwards Chloe Kelly and Lauren Hemp supporting the midfield unit. There was a flexibility to how City did this, and they varied their approach depending on the position of the ball. If Chelsea were playing out down their right, Hemp would withdraw and aim to delay the forward movement of Chelsea right-back Mjelde. Hemp’s timing was important as she moved from inside channel to outside channel, and towards Mjelde as the ball travelled. This movement meant that Hemp was able to protect the central space and press the ball, and she was backed up by a central midfielder (below). She adjusted her position depending on the movement of the ball and the decision of Chelsea’s right-sided centre-back Millie Bright. This strategy aimed to stifle Chelsea’s attempts to play out from the back, and denied space to play in central areas. Chelsea struggled to play their usual game as a result.

Opposite movements and switches of play

Changing the point of attack at pace was an important strategy for Chelsea. Opposite movements from Chelsea’s attackers helped stretch City’s defensive shape, with Kerr occupying the centre-backs, before peeling off into the inside channel. This purposeful movement forced a City defender to follow her, and created space in the opposite wide channel for a switch of play (below). The constant width provided by left wide-forward Guro Reiten meant there was always a player out there to receive the ball in space.

If unable to penetrate the compact Manchester City defensive line, Chelsea aimed to create space for their overlapping full-backs (below). Mjelde always looked to create a clear passing line to receive, and in doing so forced City to pull players out wide. Then, when she got on the ball, she aimed to cross early, either cutting the ball back from the goalline or driving the ball across the face of goal when crossing from deeper. Chelsea had plenty of options in the penalty area, which pushed City’s defence deeper. The hosts also had options to cut the ball back around the edge of the penalty area, such as Fran Kirby for the opening goal of the game.

Manchester City lined up in a 4-3-3 formation and were keen to play out from the back, maintaining possession deep in their own half with the aim of drawing the Chelsea press out  (below). They then looked to change the pace of their play to pass through or around Chelsea’s press. Holding midfielder Laia Aleixandri was crucial to this strategy. She would often look to receive on the half-turn and play forward at pace, thus maintaining the speed of her team’s attacks.

Chelsea withdrew into a 4-5-1 formation out of possession, and frequently deployed a mid-block aimed at protecting central areas. Centre-forward Sam Kerr aimed to force play down one side of the pitch, and was supported by the movement of number 10 Fran Kirby. Wide forwards Guro Reiten and Lauren James adopted positions alongside the midfield unit and aimed to screen passes into central areas. Occasionally, Chelsea surprised City with a high press, but that did not cause their opponents many issues.

City built out in a variety of ways. If she had space to step into, right-sided centre-back Steph Houghton took the opportunity to drive forward with the ball into the middle third. This movement triggered an inside-and-withdraw run from wide forward Chloe Kelly, away from her wide position and into a zone where City looked to create an overload (below). This movement from Kelly would force Chelsea to be responsive out of possession, and adjust their shape. They had to communicate constantly and quickly hand over marking responsibilities from player to player.

Left-sided centre-back Alex Greenwood was less keen to travel forward with the ball than Houghton. She was supported by the movements of Lauren Hemp, who dropped from a wide-left position into midfield in the inside channel. This was a trigger for left-back Leila Ouahabi to move into the position that Hemp had vacated (below). These movements created an opportunity for Manchester City to bounce the ball between players with the aim of moving Chelsea out of shape. However, City failed to create the quality of chances that their build-up play deserved, and failed to break Chelsea down and find the net.