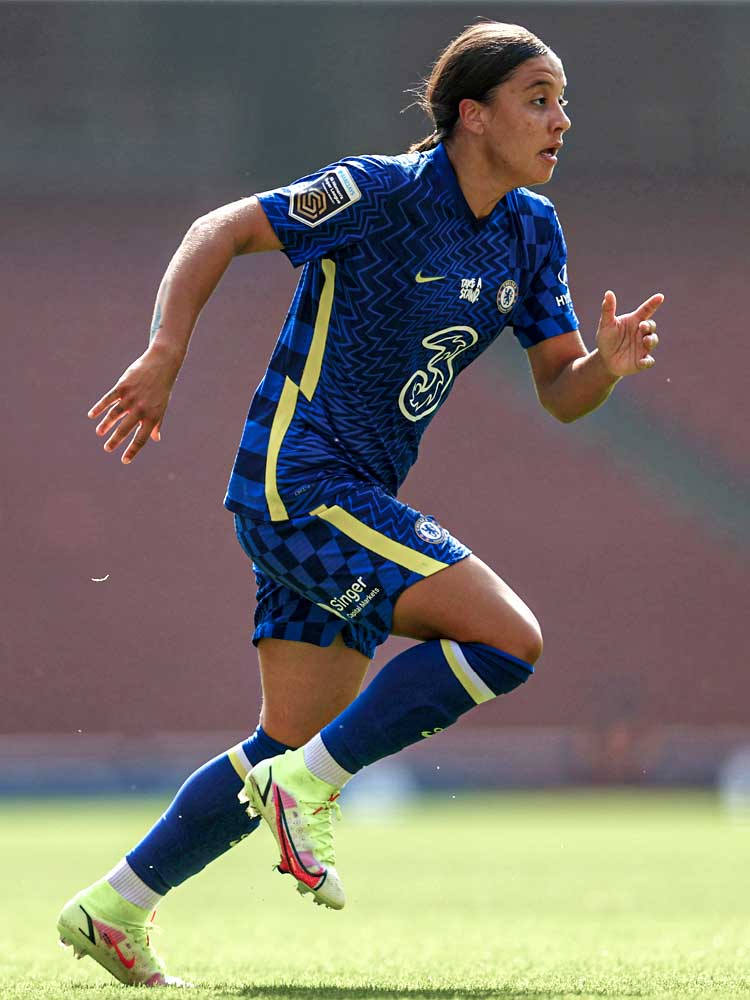 Profile
Sam Kerr was being described as one of the biggest signings in the history of the Women's Super League when she was preparing to make her debut for Chelsea in January 2020. Aged 26 when she arrived from Perth Glory, Kerr was Australia's captain, having made her international debut at 15 and scored for them for the first time at 16.

Under Emma Hayes, Chelsea were already considered one of Europe's strongest teams, but Kerr's presence and leadership, and her partnership with Fran Kirby, has unquestionably made them stronger. "Some call it telepathy, some call it chemistry, some call it a brilliant partnership," said Hayes. "(Dwight) Yorke and (Andy) Cole, I think about those two and I think of Kerr and Kirby.”

Tactical analysis
Kerr is at her best when selected as a striker and given the freedom to drift to wide on the left. She plays at a high tempo in both creating and finishing goalscoring opportunities from central territory, from where she also demonstrates the confidence and physicality to drive at opponents and dominate them one-on-one, sometimes by using her body to move across the path of an opponent to take them off-balance, or to move in front of them and make it difficult for them to challenge her.

When creating from in behind, she proves similarly difficult to defend against because of her ability to draw fouls and therefore win penalties. She seeks to occupy positions between defenders to maximise the spaces in behind when through balls are played or to combine with those around her. That she can so effectively change speed and direction complements that; she regularly scans, and times her runs and movements by recognising triggers from her teammates, potentially drifting into a position out of her opponent’s line of sight (below) and then seeking to play with few touches. It is that same awareness that contributes to her deciding her next action before she receives the ball and ensuring she poses a consistent threat in the penalty area; balls delivered at the right height will be met with a well-placed header; at corners runs are made to ensure she arrives late and evades those attempting to mark her.

If instead positioned in the wide channels, Kerr seeks to play outside of the width of the opposition’s defensive line (below), testing their desire to follow her or to remain compact. By then adopting a side-on body position, building a picture of her surroundings, and then receiving on the back foot she can play forwards at pace.

A similar flexibility exists when her teammates are building attacks and Kerr contributes by withdrawing into deeper territory to link play. She is also capable of receiving direct balls from the defensive third; if marked tightly with her back to goal, she favours responding by flicking the ball around defenders and in behind with the outside of her foot. If possession is instead being built towards the final third she contributes by combining with those in midfield, or arcing her runs into deeper territory to draw an opponent with her and then progress possession wide.

When she is the one playing passes (below) she seeks to add an element of disguise to doing so. She plays the ball accurately, and therefore often penetrates small gaps between the lines, but there also remain occasions when her passes unintentionally slow attacks, undermining her team’s efforts.

She, regardless, willingly tracks back to make regains. She regularly competes for possession, and when she successfully makes regains seeks to quickly transition into attack. It is when she is struggling to move alongside her opponent while attempting to make a regain that that same desire means she can be drawn into committing fouls.

Role at Chelsea
Kerr most consistently features for Chelsea as a central attacker (below) , regardless of whether they are organised into a 3-4-3, 4-4-1-1 or 4-4-2. It is in the latter shape that she is selected on the left of their front two, from where she partners Bethany England, but in each system she is given the freedom to and encouraged to run at defenders with the ball.

Kerr is increasingly adaptable from within their 4-4-2, which demands she withdraws to link play through midfield, often having received possession from those in defence, from central midfield, or from towards the left. In receiving passes in central territory, she then curves her runs towards the wide channels to invite her midfield teammates to advance and contribute to the creation of overloads against the opposition's defence.

When Chelsea are instead using a 3-4-3 or 4-4-1-1, Kerr remains advanced when regains are being made in the defensive half, and seeks to correctly time her runs across the front of her direct opponent to remain a threat when they transition into possession. She then relies on her body to protect the ball, and uses her first touch to progress the ball in behind, or to towards her opponent's weaker foot.

To that end, Kerr prepares space for herself in the attacking third by occupying positions outside of her opponents' field of vision and then making a late movement into the penalty area while ensuring she monitors the deepest-positioned defender to remain onside. From within their front three she, similarly, seeks to rotate with their other attacking players to make her movements and intentions less predictable, and attempts to complement that by remaining typically ruthless in front of goal.

Her body strength makes her capable of protecting the ball and resisting opposing defenders even with limited space, and by striking the ball with power by driving her foot through it, she is a particularly reliable goalscorer from between the six-yard box and penalty spot. Through remaining effective despite little space she also regularly creates chances for her teammates, often via carrying possession from a wider position and quickly rotating with a teammate – she and Kirby have a particularly potent understanding – to stretch the opposition's defence. That she remains such a consistent performer enhances her value to Chelsea as much as her variety in the final third.