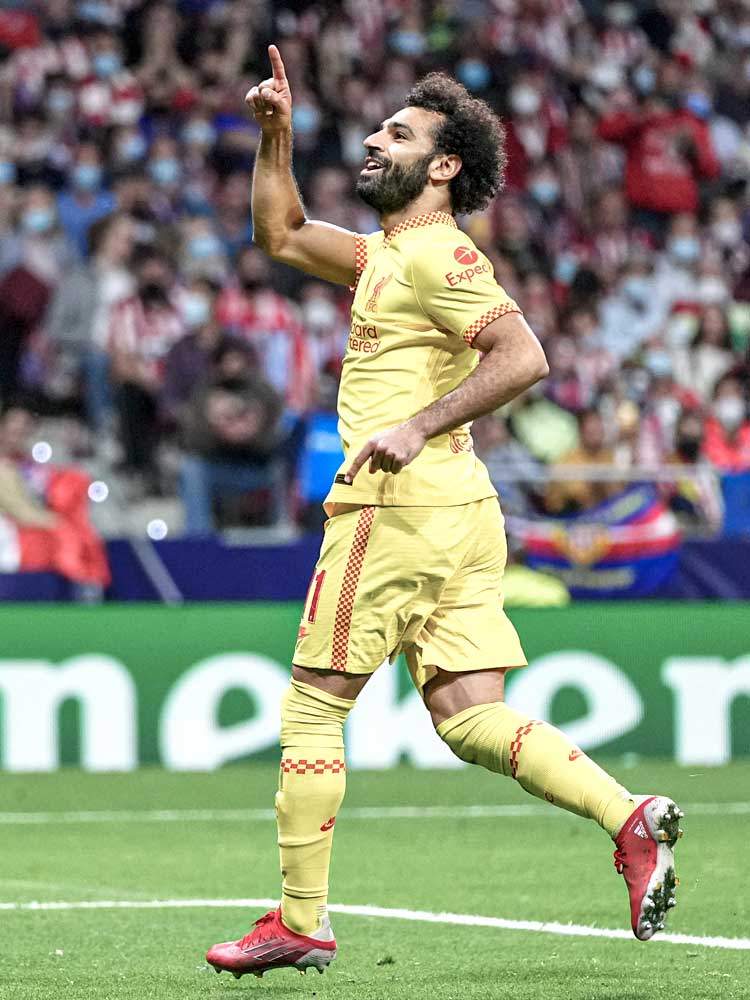 Liverpool moved five points clear at the top of Group B to edge closer to securing qualification to the knockout stages of the Champions League. Two goals in the opening 13 minutes from the in-form Mo Salah and Naby Keïta were cancelled out by two from Antoine Griezmann later in the first half, but Liverpool continued to put their hosts under pressure during the second. Griezmann was later sent off, and Liverpool were eventually rewarded when Salah again gave them the lead from the penalty spot after Mario Hermoso's clumsy challenge on Diogo Jota. Atlético Madrid sit second, on four points and ahead of Porto on goal difference. AC Milan are fourth, having lost all three of their games. "We played a really solid second half in a tough game with intense football from both teams," said Liverpool's manager Jürgen Klopp. "We got the penalty, then there was a red card and obviously it was in our favour." His opposite number Diego Simeone refused to shake his hand, and said: "It’s not healthy for either the winner or the loser. But now, when I see him, I’ll greet him without a problem."

Atlético Madrid's ambitious attacking shape
Diego Simeone organised his team into an adventurous 3-5-2 formation (below) in which their width was provided by their wing-backs Kieran Trippier and Yannick Carrasco, and Thomas Lemar and Rodrigo de Paul provided support ahead of Koke, their defensive midfielder. Antoine Griezmann and João Félix formed a talented front two, and Atlético's three central defenders often spread wide as they built play, in an attempt to progress around Liverpool's front three.

Félix's potency on the left
On the occasions Atlético could switch play from the right and around Liverpool's 4-3-3 with sufficient speed they succeeded in finding Félix in the inside channel, where his ability to spin and combine in limited spaces helped move possession back into midfield, after which it could again be switched across to Trippier on the right. Félix proved equally capable of combining with the advanced Carrasco (below), and Lemar; by progressing around Naby Keïta and drawing Joël Matip towards him, he also gave Griezmann increased time and space to receive the ball, as was demonstrated when he scored his second goal.

Atlético's ability to counter
Atlético prioritised attacking on the counter after Griezmann's dismissal. Carrasco represented a key outlet on the left, where he also eased the pressure they were under, and was supported by Félix and their three central midfielders (below). Against Liverpool's wider movements and combinations, Lemar and De Paul were regularly forced to withdraw into defence, leaving Carrasco often better positioned to advance after regains were made. Simeone's team then impressed in holding their attacks so that they could commit increased numbers forwards, and then switching play to Trippier, from where he could cross into the penalty area or combine with De Paul.

Direct access to the left wing
Atlético prioritised attacking down the left on the rarer occasions they had spells of possession during the second half. Lemar drifted from central midfield to where Carrasco remained advanced – Trippier was consistently more withdrawn on the right – and Félix was often in the inside channel. With Koke and De Paul providing passing options between Liverpool's front three, the hosts progressed over and around Liverpool's midfield three. Wider combinations also contributed to them occasionally progressing forwards, but in the final third they lacked an attacking presence, particularly around Liverpool's central defenders.

Liverpool's 4-3-3 prioritised attacking with width
When Roberto Firmino withdrew into midfield to alongside James Milner and Keïta, Jordan Henderson withdrew into deeper territory at the base of midfield, in turn encouraging Trent Alexander-Arnold and Andy Robertson to advance from full-back (below). The hosts therefore had a back three against what was Liverpool's front two, so Liverpool played around their 5-3-2 defensive block, and scored their first two goals by doing so. Mo Salah proved particularly effective at cutting infield when attacking against Carrasco; when Milner and Keïta advanced without the ball they also enhanced the threat they posed in the penalty area, as Milner showed for their first goal and Keïta showed for their second.

Combinations through the inside channels
One-twos often succeeded in drawing an opposing midfielder out of position, in turn creating space in the centre for Liverpool to attack through. By combining with a wide forward moving infield, a full-back or central midfielder proved capable of receiving between the lines and creating increased space for secondary forward runs. Liverpool demonstrated that particularly well on the right, where Salah held a wider position for longer than did Sadio Mané; Firmino also rotated to encourage Salah to move infield (below), and therefore create additional space for a central midfielder to advance into.

Building with width against Atlético's 10 men
Jordan Henderson and Alex Oxlade-Chamberlain attacked as attacking central midfielders, and Diogo Jota operated from Liverpool's attacking line, against Atlético's defensive block. Firmino continued to withdraw into midfield to link play, as he did when he moved the ball away from pressure towards Henderson or Oxlade-Chamberlain; Liverpool's attacks also focused on their full-backs and attacking central midfielders, in turn encouraging Salah and Jota to move infield earlier as their leading attacking threats.

Liverpool's overlapping midfielders
The visitors' increasing dominance of possession during the second half, and the overlapping runs of Oxlade-Chamberlain and Henderson that helped them to create overloads in wide territory, ensured that they regularly progressed around their opponents' midfield three and then wing-backs. Further rotations were made on the right, where Firmino moved to provide support, Henderson overlapped, and Alexander-Arnold remained infield to provide crosses towards Jota and Salah from a different angle.