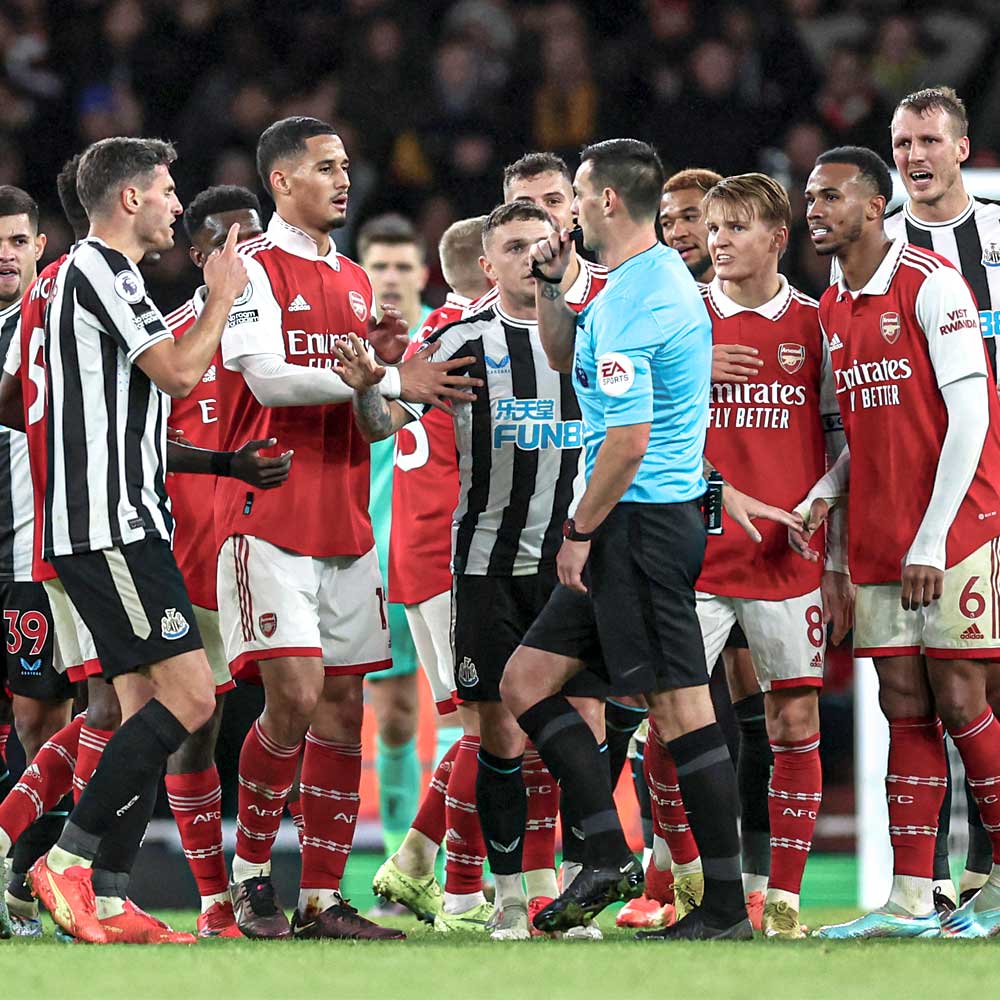 Arsenal stretched their impressive lead at the top of the Premier League to eight points with this draw against Newcastle, but in doing so also handed second-placed Manchester City the chance to gain ground with their game in hand. The league's two in-form teams could not be separated at the Emirates in a feisty affair that saw nine players booked, as Eddie Howe's Newcastle frustrated their hosts and kept yet another clean sheet. They have conceded only 11 goals in 18 Premier League games this season, and sit third in the table as the 2022/23 season approaches its halfway point.

Arsenal manager Mikel Arteta was incensed that his side had two penalty claims turned down, but still pleased with his team's performance. "There were two penalties," he said. "It's very simple. I'm talking about what I've seen. It was two scandalous penalties. [But] if we keep playing like that, performing like that and dominating, we will win a lot of matches."

Howe, meanwhile, praised his side for another solid defensive display. "I thought we were resilient, dogged and brilliantly defended all areas of the pitch collectively," he said. "Our defensive performances have been very good, and that's full credit to everyone. We want to compete in every game, we don't want to turn up to grounds like this and not give our best. We competed to win and we didn't manage to do that, but we certainly gave them a good game."

Mikel Arteta set Arsenal up in their usual 4-3-3 shape, but they formed an overload in central midfield with left-back Oleksandr Zinchenko moving inside (below). This 4v3 against Newcastle’s central midfield helped Arsenal start strongly, as they dominated possession and territory in the game’s early stages. Wingers Bukayo Saka and Gabriel Martinelli held the team’s width, creating huge gaps in the space between them and centre-forward Eddie Nketiah. Nketiah often dropped short, dragging one of Newcastle’s centre-backs out of the back line. Number eights Granit Xhaka and Martin Ødegaard then looked to exploit these spaces with forward runs from deep. As a result, Arsenal broke into the final third at pace and numbers on a few occasions.

Arsenal forced Newcastle into a lower block for long spells, and the visitors responded by adapting their left side to give Dan Burn more support up against Saka. Joelinton recovered very deep to create a 2v1 overload against Arsenal’s right winger, with Joe Willock moving across to screen access into Ødegaard (below). This meant Arsenal right-back Ben White was often free, but Newcastle’s central midfield concentrated on protecting the central areas and prevented access into Arsenal’s players between the lines. Right-back Kieran Trippier then helped Fabian Schär close to Nketiah. Newcastle’s adapted block severely limited the impact of Arsenal’s dominance of possession.

From his position on the left side of Arsenal’s double pivot, Zinchenko consistently broke through Newcastle’s midfield unit with his incisive passing. He sometimes used disguised passes through the left inside channel, facing Martinelli on the left but then cutting across the ball to find Xhaka in a central position (below). On other occasions, he was able to break lines with first-time forward passes because Newcastle had loaded their left side to deal with Saka on the Arsenal right. Arsenal had some joy when switching play away from this overload in the second half, playing through Zinchenko, who then found Xhaka. The Ukrainian had a significant influence on the game.

In an attempt to grab a winner, Arsenal pushed forward late on, with full-backs Zinchenko and Takehiro Tomiyasu – a replacement for White – getting closer to the wingers to form wide pairs (below). Centre-backs Gabriel and William Saliba stepped into the inside channels when bringing the ball out of defence, taking up positions either side of single pivot Thomas Partey. Newcastle showed less ambition as the game went on, and dropped back into a 4-5-1 defensive block to finish the match. Arsenal’s number eights, Xhaka and Ødegaard, continued to operate in the inside channels, looking to find the penetrative runs made by the wingers, or combine with Nketiah. The home side had one late chance as Xhaka flicked the ball forward to Nketiah, but he could not quite beat Nick Pope in the Newcastle goal.

Converting into a back three

Newcastle used a 4-3-3 shape on paper, but converted into a back line of three once they had possession. Kieran Trippier advanced on the right, getting into advanced positions to try and get crosses into the box. Miguel Almirón then moved inside from his slot on the right wing to operate between the lines (below). These movements meant Gabriel Martinelli was forced to recover back deeper, which reduced his threat on transition. On the left, Dan Burn narrowed inside, with Joelinton providing the attacking width. He looked to link with Joe Willock, who had space to push into on this side – unlike Sean Longstaff on the right, who had Almiron ahead of him.

In the second half, Almirón held a wider position on Newcastle’s right, which allowed Longstaff to make penetrative forward runs through the inside channel. Bruno Guimarães was a roaming single pivot, happy to move very wide to support wide combinations on both sides of the pitch (below). Trippier made delayed forward runs to add further quality to Newcastle’s wide combinations on their right, while Joelinton and Willock proved effective on the left. Without the support of a full-back on this flank, Willock was forced to drive forward with the ball more. Although this helped Newcastle start the second half with intensity, they faded as the game went on and eventually dropped into a lower block.

Defending deeper in a 5-4-1 to try and maintain their clean sheet, Newcastle only really threatened with counter-attacks into the wide areas. They particularly focused on their right side, trying to exploit the space that Zinchenko had left to move into his inverted central position (below). Substitute right winger Jacob Murphy had more space to drive into, and Newcastle committed men to these attacks, with direct balls forward from central midfield proving useful. Fellow substitute Chris Wood provided an aerial target from any crosses, and Murphy attempted to retain possession for long enough that Trippier could push forward and provide dangerous crosses. They could not find a way through, but they did hold on to earn a potentially crucial away point.