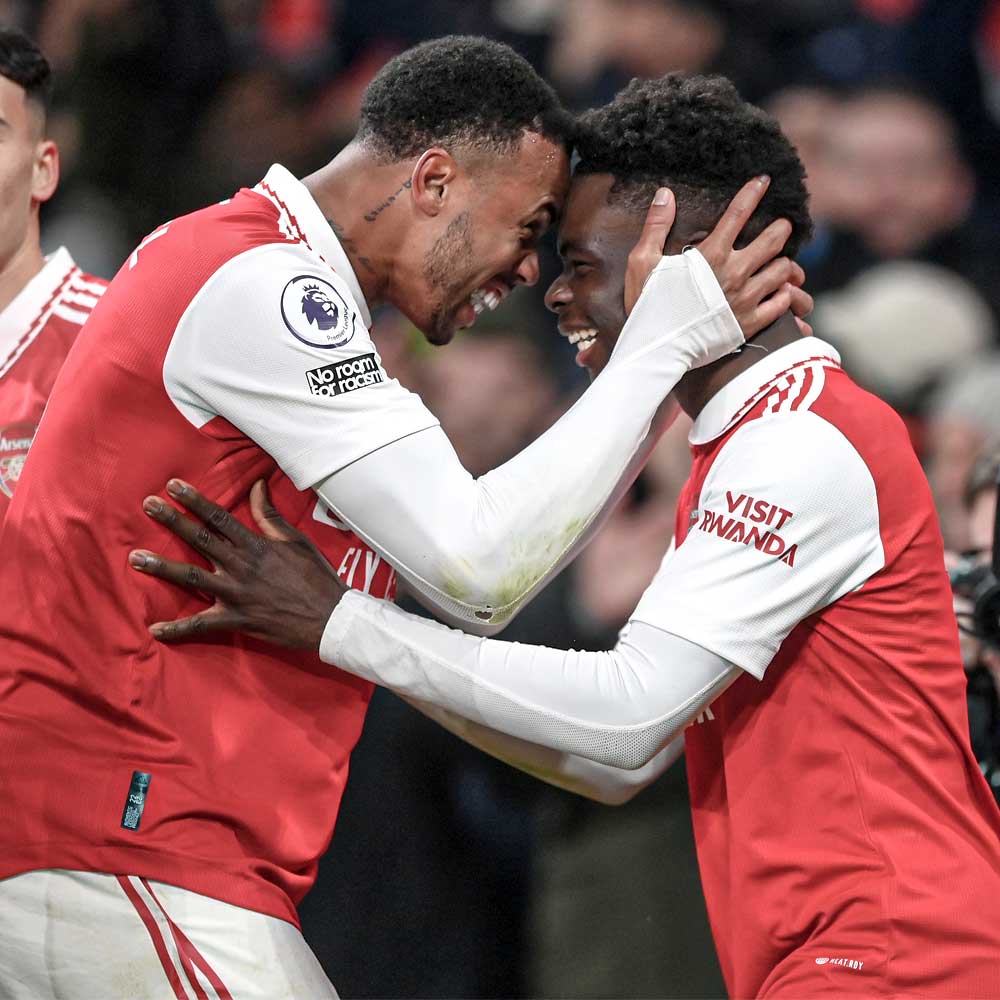 Arsenal reached a remarkable milestone at the halfway stage of the 2022/23 season, by making it to 50 points following Eddie Nketiah's last-minute winner against Manchester United. Mikel Arteta's impressive side now have 16 wins from 19 games, and with this win stretched their lead at the top of the table to five points with a game in hand over second-placed Manchester City. They do still need to play City twice in the second half of the season, but their lead is so vast that they can afford to lose both of those games and still remain ahead of their closest challengers.

They dominated this game, had the better chances and fully deserved their dramatic winner, as Nketiah continued to show Arsenal have the depth to contend with the long-term injury to first-choice forward Gabriel Jesus. Arteta described Nketiah's late goal as "a beautiful moment".

"I really enjoyed it," he said. "It was a beautiful moment at the end and we get going with our people behind us. We encourage our players to play free-flowing football and there is energy in the team and good things happen. To do it repeatedly against big teams, the way we played today, gives me a lot of positivity for the future."

Arsenal attacked using a 4-3-3 shape, with space on their left key to their strong start. Nketiah dropped to help Bukayo Saka and Martin Ødegaard work the ball from right to left to find the left-sided number eight, Granit Xhaka. He would then quickly look wide to find Gabriel Martinelli (below), who ran directly at United right-back Aaron Wan-Bissaka whenever he could get him one on one. Martinelli created some decent openings, but United packed the box and blocked several efforts early on. Arsenal’s equaliser came after Xhaka found space to cross on the left, with Nketiah heading home from close range.

Ødegaard has played a crucial role for Arsenal this season, and his performance was key to his team’s improvement in the first half. He dropped deep regularly to help work the ball around United’s block. Arsenal’s defenders looked to find Ødegaard in the right inside channel (below), and he then tried to feed Saka, who turned and dribbled at left-back Luke Shaw. Bruno Fernandes dropped deeper in the United midfield to limit access to Xhaka and Arsenal’s left, but the result of that was more space and time for Ødegaard to influence the game. That led to more involvement for Arsenal’s most dangerous player in Saka, too.

In the second half, Arsenal continued to threaten consistently down the flanks (below). The game plan was to find Saka as early as possible, and he dribbled inside, with Ødegaard and Nketiah making sure not to crowd his space. Saka scored a superb goal to put Arsenal in front after cutting in and shooting, and he struck the post with a similar effort shortly after. United responded by doubling up on the England winger, and his influence waned slightly as a result. On Arsenal’s left, meanwhile, Wan-Bissaka got out to Martinelli quickly, but United’s double pivot failed to cover other runs through the inside channel, with Xhaka receiving in more dangerous positions than Martinelli as a result.

Fred’s addition in United’s left inside channel further limited Saka’s ability to cut inside, as one-on-one situations now became three-on-three (below). Arsenal then kept the ball more patiently in the final third, with individual changes of speed needed to help create gaps, as opposed to the more direct attacks they had been using. This locked United deeper in their half, and Arsenal switched play through inverted full-back Oleksandr Zinchenko, who spent long periods in central midfield. United were forced to sustain long spells out of possession and dropped back into a 4-5-1 block. Arsenal’s persistence was eventually rewarded when debutant Leandro Trossard slipped Zinchenko in to cross, and Nketiah scored from close range to send the Emirates into raptures.

Erik ten Hag set United up in a 4-2-3-1 shape, with Arsenal dropping back into a very compact 4-4-2 block when defending in their own half. United sustained possession high up the pitch thanks to their effective rotations in central midfield, with Christian Eriksen and Scott McTominay pushing forward when Bruno Fernandes dropped deep to receive from the centre-backs. The full-backs then advanced, and wide forwards Anthony and Marcus Rashford moved inside to get closer to Wout Weghorst (below). The centre-forward constantly pinned one of the host’s central defenders. His movement created a small gap for Rashford to exploit, with the England forward hitting a superb strike from range to put the visitors ahead.

Weghorst dropped into midfield to link play, help build attacks and gain territory for his side. His movements disrupted Arsenal’s back line, pulling one of Arsenal’s centre-backs out of the defensive line (below), which helped create gaps for others to exploit. Fernandes then made penetrative runs through the middle, while the wide forwards made diagonal runs infield to threaten the space in behind. Weghorst’s movement also helped the midfield play through the centre of the pitch and created opportunities to switch the play quickly.

In the second half, United struggled to break down Arsenal’s compact block and created little of note. They looked most threatening after winning second balls in the middle third of the pitch, and then playing quick passes forward into the space beyond the Arsenal defence (below). United’s equaliser came from a corner, which was gained after winning a second ball in midfield and counter-attacking quickly on transition. Rashford’s movements on the left were United’s main source of any threat; after Fred was brought on for Antony, United offered very little indeed down their right. United’s threat on transition diminished further, and Arsenal eventually broke them down to secure a hugely important three points.