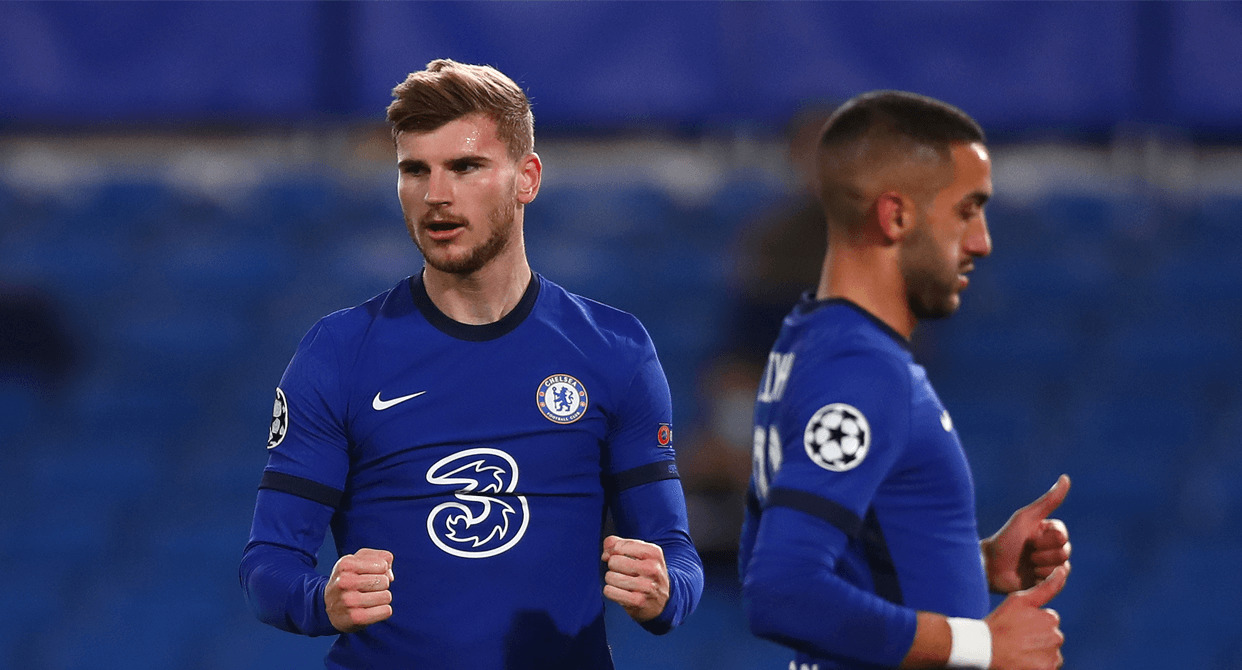 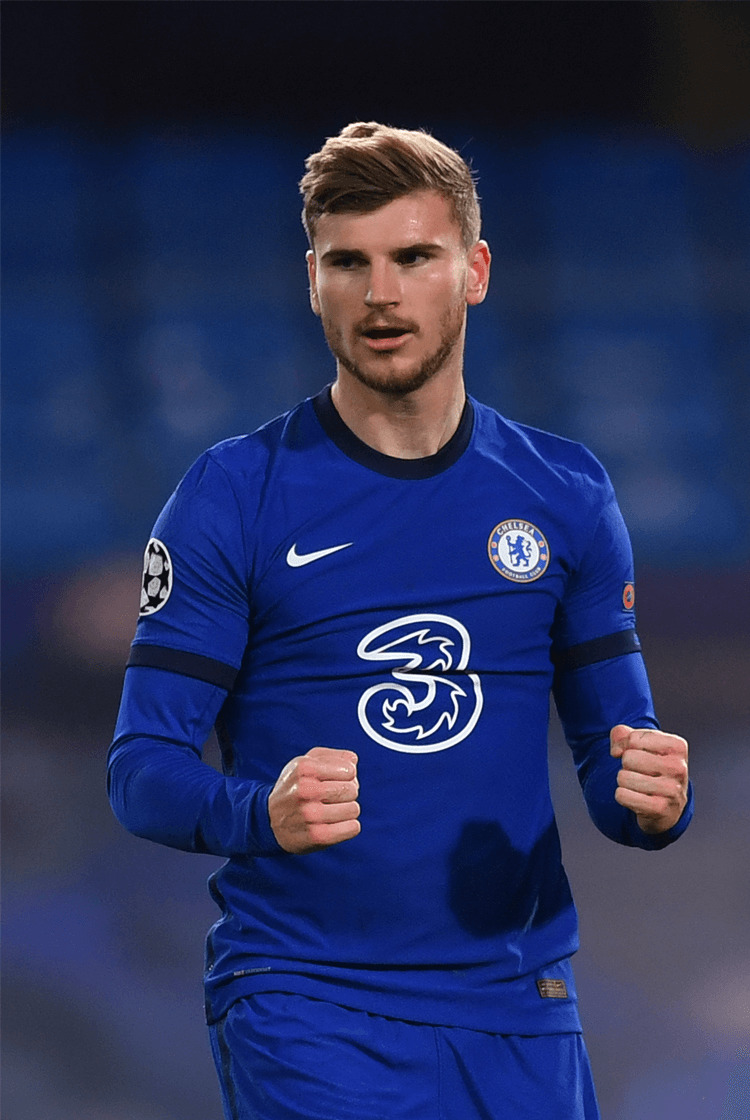 Chelsea eased to victory over Rennes to remain on course to reach the knockout stages of the Champions League. Aided by Dalbert being dismissed in the 40th minute for two bookable offences, Frank Lampard's team led 2-0 at half-time after Timo Werner twice scored from the penalty spot. A third goal from Tammy Abraham, five minutes into the second half, essentially put victory beyond doubt, even at that early stage. Werner has been directly involved in 13 goals – 10 goals and  three assists – in his past 14 appearances in the Champions League. The most recent of those five goals have come from the penalty spot. "We did the right things in every aspect," Lampard said. "Started well, got our goals, saw the game out well and had the chance to give others minutes later on. We dealt with the early part of the second half really well. It’s not always easy against 10 men when they’ve had a bit of time to talk and arrange themselves but we kept the ball moving in the early parts of the second half." Discussing Dalbert's red card, Rennes manager Julien Stéphan said: "It was a turning point in the game, it makes it difficult against a team like Chelsea who have good players in every position." 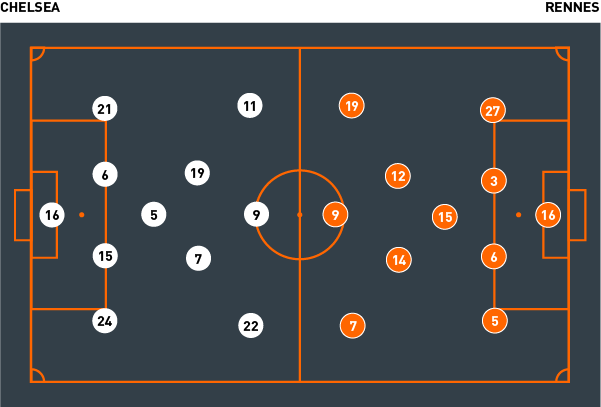 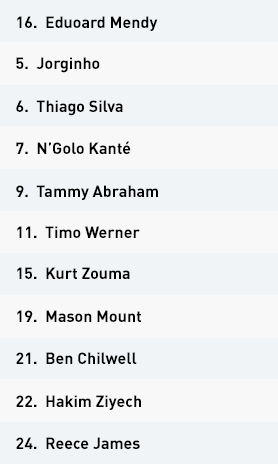 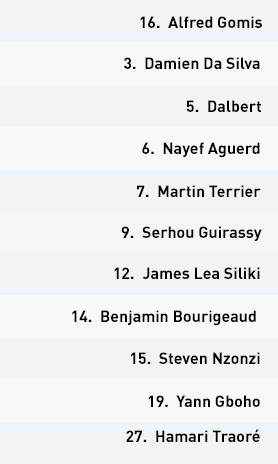 Chelsea were organised by their manager Frank Lampard into a 4-3-3 formation led by the front three of Hakim Ziyech, Tammy Abraham and Timo Werner. Their visitors, Rennes, defended with a 4-5-1 – Serhou Guirassy was their lone striker.

Rennes largely remained in a mid-block, in an attempt to prevent Chelsea playing through the central areas of the pitch. Guirassy worked to press the in-possession central defender, and a central midfielder would move to the other central defender if a pass was made. To prevent a space therefore appearing in central midfield, their widest midfielders retained narrow positions; for that same purpose Steven Nzonzi also regularly moved across.

Chelsea's front three had a fluid approach that often meant Ziyech rotating, from the right, with Werner and Mason Mount, and Reece James advancing into his nominal position from right-back. After moving possession wide, they also targeted Jorginho, so that he could play clipped passes out to the wings or the spaces in behind Rennes' defence, but if the former succeeded, the latter rarely did, largely because of Rennes' ability to defend against them.


Rennes prioritising the central areas of the pitch encouraged Ziyech and Werner to move infield and into the half-spaces; when them doing so forced Rennes to become more compact, James and Ben Chilwell had increased spaces to attack into, and second-line passes helped Chelsea beyond Rennes' midfield. By comparison, the hosts' attempts to advance beyond Rennes' defence were fairly limited. The ball was moved, diagonally, outside to the full-back or wide attacker offering a penetrative run between the opposing full-back and central defender, but Rennes proved capable of tracking those runs, and their direction meant them facing away from goal and therefore pressure also being applied to them.

Further attempts to attack involved wall pass combinations intended to draw the defenders' eyes towards possession while a penetrative run was made elsewhere, potentially undetected, but even if they had moments of success they continued to struggle to create quality goalscoring chances. Abraham often risked getting caught offside, so there were almost inevitably occasions when he was, but the positions he sought to adopt were difficult for Rennes to defend against and contributed to him scoring their third goal.

Dalbert's dismissal, towards the end of the first half, presented Rennes with a further challenge in their attempts to remain compact. They thereafter used a 4-4-1 when they were without the ball, so with only Guirassy pressing in the final third, Chelsea were able to switch play with increased ease. Their defensive line regardless remained compact and organised; the final score flattered Lampard's team.

Rennes manager Julien Stéphan set his team up into a 4-3-3 formation led by the front three of Yann Gboho, Martin Terrier and Serhou Guirassy. Their opponents, Chelsea, remained in their 4-3-3 while they defended.

Chelsea sought to press Rennes near their own goal. Tammy Abraham prioritised the influential Steven Nzonzi, and Timo Werner pressed the outside shoulder of Rennes' central defenders, forcing them inside. With Mason Mount, Jorginho and N'Golo Kanté operating in a man-oriented manner in central midfield and Chelsea's full-backs pressing Rennes', Nzonzi moved into their defensive line, forcing Ziyech and Werner to press from a wider position and therefore increasing Rennes' space. Even if Werner and Ziyech attempted to remain in their narrower positions, Rennes' access into their full-backs became easier.


Rennes' wide forward moved to between the relevant, opposing wide forward and central midfielder to force them to become compact, and to encourage possession to the full-back advancing outside of him. From those wide areas, the visitors sought to deliver crosses into the penalty area, and they created their best goalscoring chances when doing so.

They had had some promising periods of possession and posing an attacking threat by the time Dalbert was sent off. His red card, and the two penalties awarded against them, regardless put even a point beyond their reach, and they thereafter struggled to impose themselves.