Profile
Unable to compete with the financial might of the Premier League’s biggest clubs, Leicester have had to contend with high-profile departures for a number of years and, after a successful first full season under Brendan Rodgers, the summer of 2020 is proving no different. Ben Chilwell is the latest to leave the King Power Stadium in a big-money move, in a £50m transfer to Chelsea.

Chilwell’s stock grew over the course of the 2019/20 season in which Leicester caught the eye for a free-flowing, energetic style of play that focused on getting their full-backs high up the pitch at every opportunity. Frank Lampard will hope Chilwell and their hugely talented right-back Reece James can provide a similar attacking threat for Chelsea next season.

“I’m looking forward to being a part of this young, dynamic squad led by Frank Lampard as we challenge for honours next season,” Chilwell said after completing his move. “Frank instilled a lot of confidence in me, and told me about the system he wants to play and how I’d fit into that. He’s keen to give younger players a chance and I can’t wait to get started.”

Tactical analysis
The best teams in modern football tend to have at least one superb attacking full-back. That was one of the most telling differences between Liverpool and Manchester City in 2019/20; Trent Alexander-Arnold and Andy Robertson set the champions apart from their closest challengers.

Full-backs have always been required to defend – that was once their main job. Now, though, defensive knowhow is not what defines a world-class full-back. The growing defensive influence of the deep-lying midfielder – see Fernandinho at City, or Fabinho at Liverpool – means that, for full-backs, ability going forward is arguably more desirable. Chilwell is even better in an attacking sense than he is defensively, making him one of the best left-backs in the Premier League.

At Leicester, Rodgers favours a 4-1-4-1 formation in which Wilfred Ndidi plays the aforementioned defensive-midfield role that allowed both Chilwell – and their equally impressive right-back Ricardo Pereira – the freedom to get forward with every attack. It is not by chance that the injured Ndidi’s absence through much of January and February coincided with a poor run of form – and a drop-off in the quality of Chilwell’s performances.

Unsurprisingly for one of Rodgers’ teams, Leicester play out patiently from the back, with the full-backs spreading wide and Ndidi providing a deep passing option in midfield. Chilwell tended to be the wider of the two full-backs; Pereira offers a narrower attacking option (below). Chilwell was encouraged to attack on the outside, often hugging the touchline, as the right-footed Harvey Barnes drifted off the left wing, leaving space for Chilwell to move into. On the right, Pereira is also capable of keeping their width, but he also attacks more directly towards goal than did Chilwell. 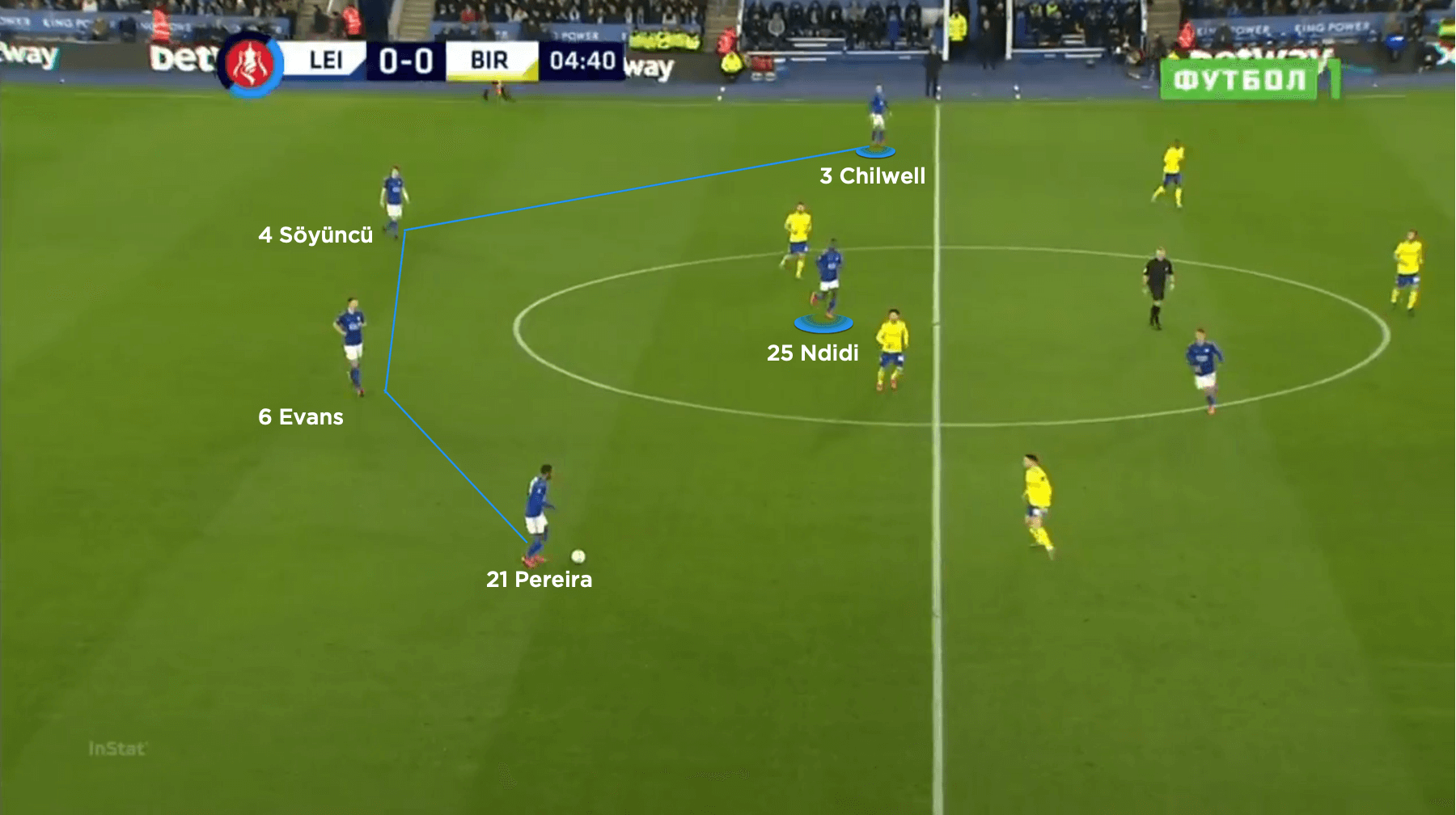 Both full-backs are particularly skilled in attacking transitions – ideal in a team built for quick counter-attacks and, in Jamie Vardy, boasting one of the Premier League’s most devastating strikers on the break. Even though they are happy to build play slowly when the opposition are set up and in position, they still try to take advantage of transitional moments and get players forward in numbers quickly after a regain of possession.

Chilwell sprung into action when Leicester won the ball. He is able to carry it at pace himself or give the opposition another runner to think about with lung-busting, direct bursts into space on the left. He was regularly one of Leicester’s most advanced players; on the right, it was no surprise to find Ricardo matching his runs (below). 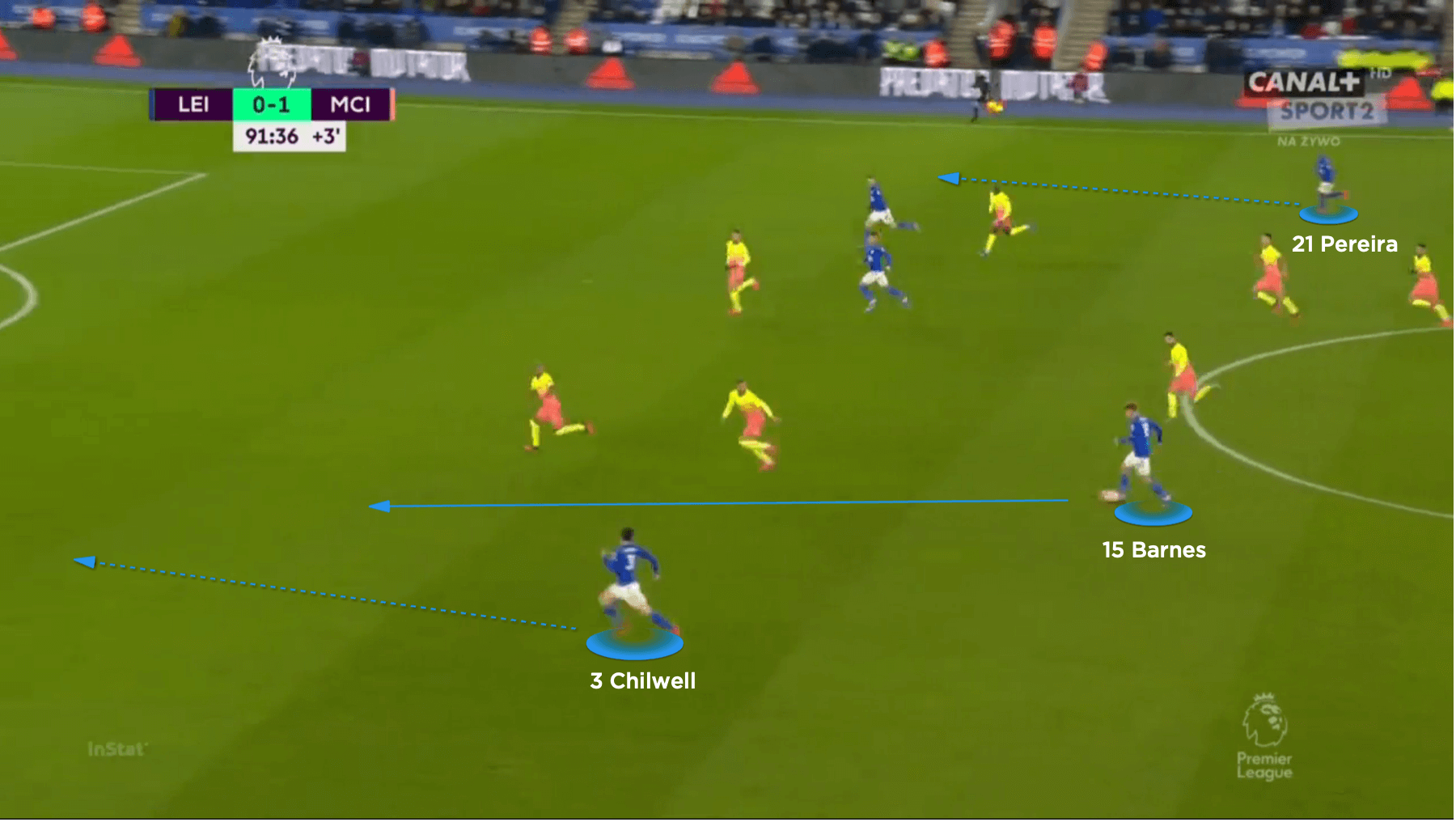 Role at Leicester
When Leicester are out of possession, they set up in a 4-5-1 formation; Chilwell would tuck in close to left-sided centre-back Çaglar Söyüncü. Teams often try to attack them using swift switches of play to isolate their full-backs and pull the defence out of position.

Chilwell was rarely caught out, though. He is constantly aware of what is going on around him and quick to react when the ball is travelling out to his direct opponent. He is proactive in his defending, sprinting across to meet the ball as it reaches its target and looking to regain possession through tackling rather than just direct play in the opposite direction. He moves quickly towards his opponent and barely slows down before getting there, thereby preventing the attacker from getting the ball under control and forcing them into a quick decision.

If an opponent manages to get the ball under control very quickly, however, they can use Chilwell’s momentum against him to move swiftly into the space he has left. His understanding with his teammates was regardless evident – as he ran to meet his opponent, the nearest midfielder followed any attacker’s run into the space alongside Söyüncü (below). 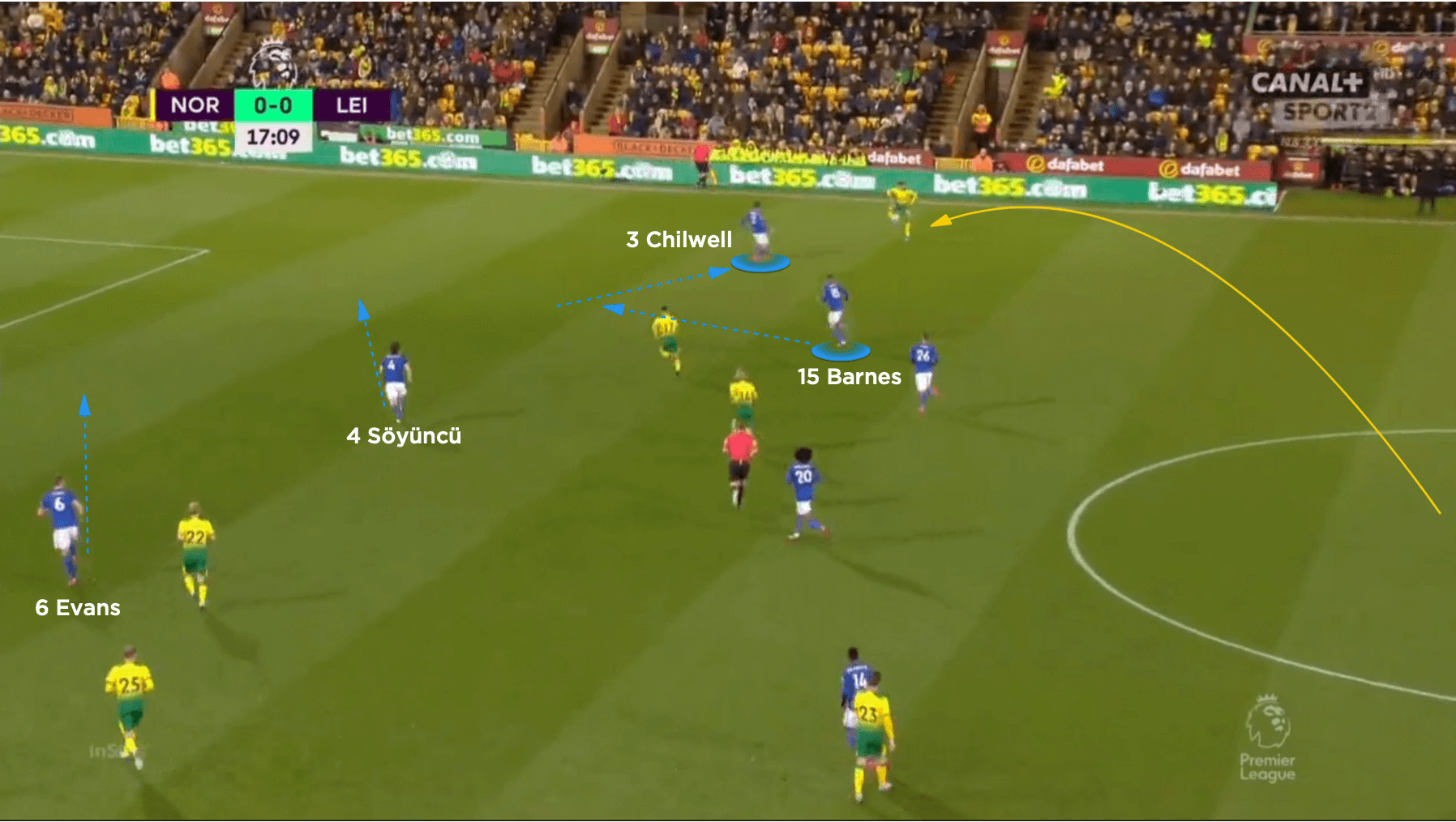 In attack, Chilwell provides a genuine and consistent attacking threat; he offered support on the left whenever Leicester went forward. He is difficult to defend against not only because he arrives on the scene late, but also because he is adept both at receiving the ball in front of the defence and delivering a cross, as he did for one of his assists in the 9-0 win at Southampton in October (goal five in the above video), and at bursting around the back of a full-back before crossing low from the byline. His sharp movements and quick acceleration discourage opponents from getting too tight to him, but his crossing ability means standing off can be just as bad an idea. When he receives a pass out wide, Chilwell tends to take his first touch diagonally towards the touchline, creating space for himself to put a cross into the penalty area.

He is just as threatening with his crosses from dead balls, too, as he proved with two assists for Harry Kane in England’s 7-0 win over Montenegro in November 2019. James Maddison’s presence at Leicester meant Chilwell was often overlooked when it came to set-piece duties, but his ability certainly should not be discounted. Alongside Alexander-Arnold, England could have two excellent set-piece takers for the Euros next summer. 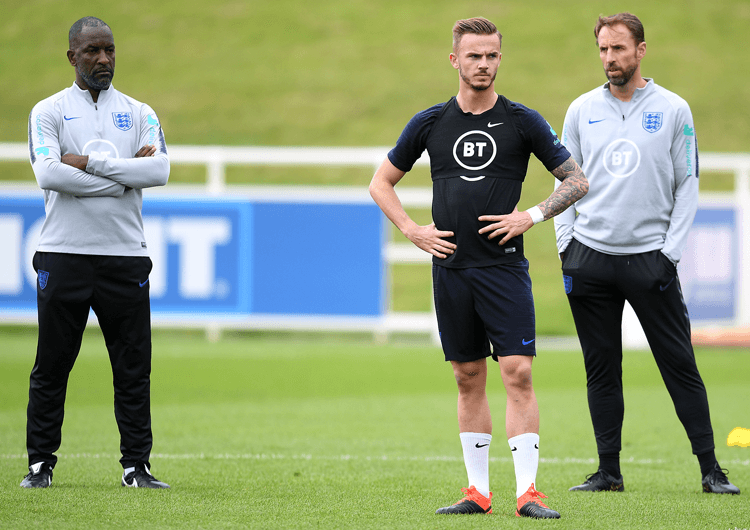 Leicester City playmaker James Maddison could soon make his England debut. Our coaches assess what he can bring to Gareth Southgate’s squad

Chelsea are chasing Champions League glory and hunting down Manchester United in the Premier League with midfielder Mason Mount playing a key role. We assess what he brings to his club side under Thomas Tuchel and England under Gareth Southgate