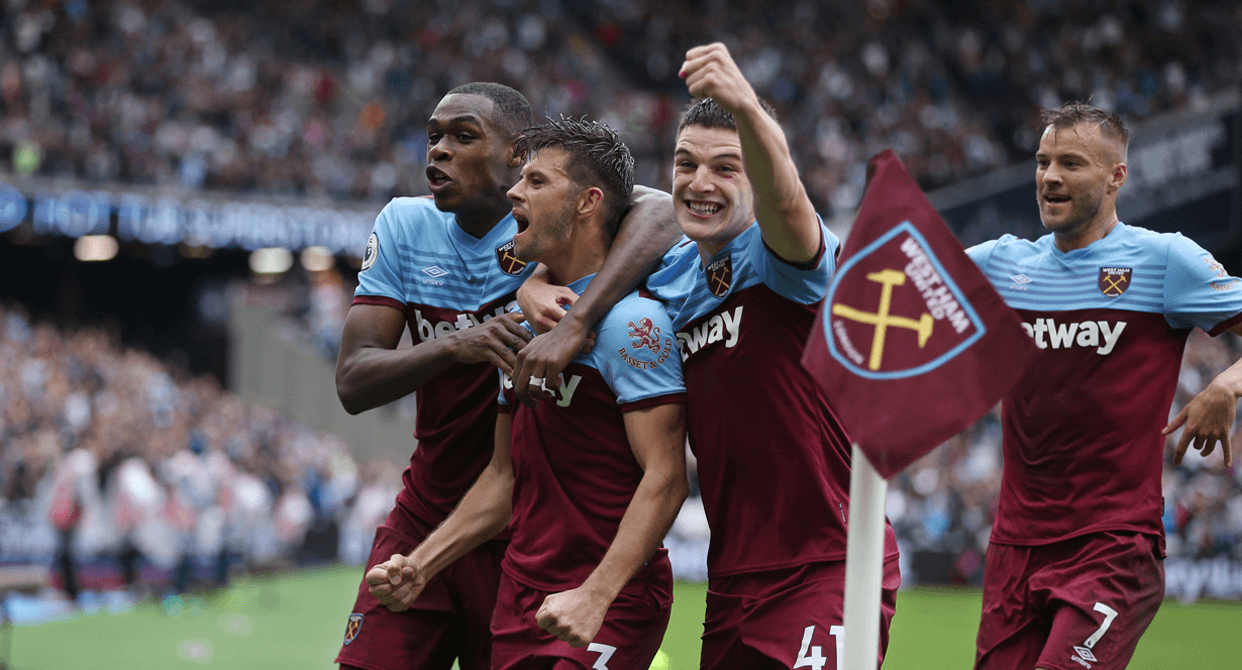 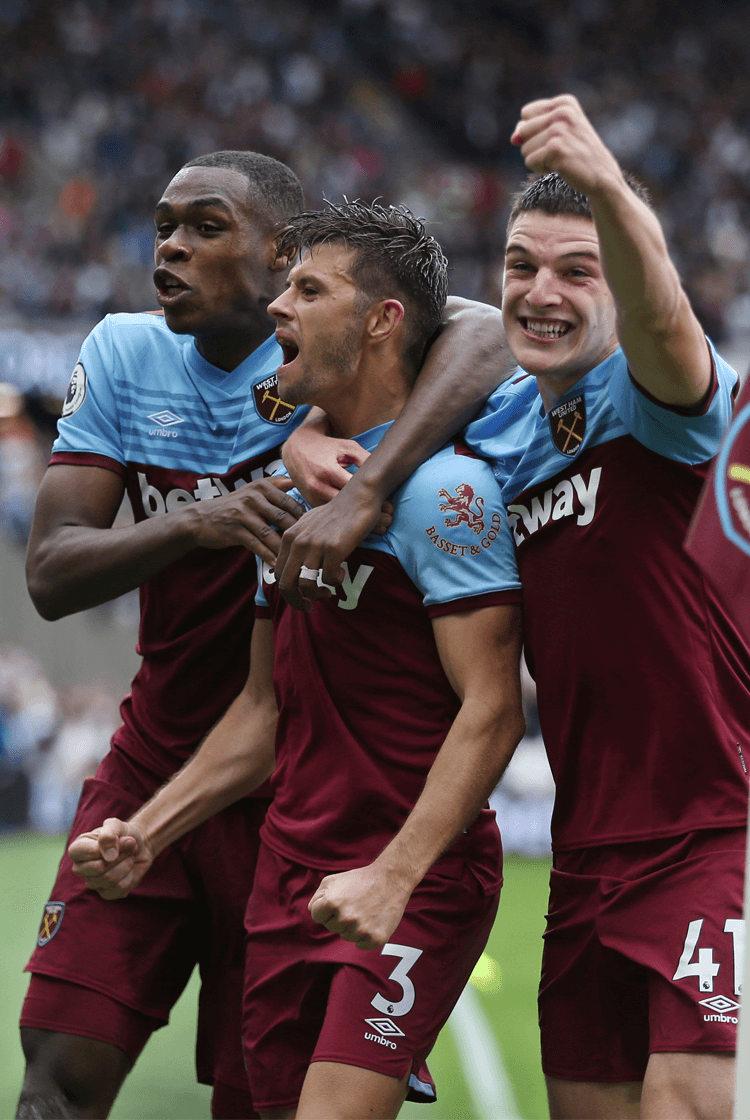 Manchester United suffered a potentially damaging defeat with another unconvincing performance, this time against Manuel Pellegrini’s improving West Ham. Victory could have lifted United as high as third in the Premier League, but an apparent lack of confidence meant that they were largely outplayed from the first minute. Ole Gunnar Solskjaer’s men offered little in response to goals towards the end of each half from Andriy Yarmolenko and Aaron Cresswell, the second a fine free-kick. They now sit eighth and have recorded seven defeats in their past 15 league fixtures – the same total as in their previous 40. "I was shocked and saddened by how bad they were," their former captain Roy Keane later said. "They were lacklustre; no quality, lack of desire, lack of leaders, lack of characters. It’s a long way back, but it’s scary how far they’ve fallen." 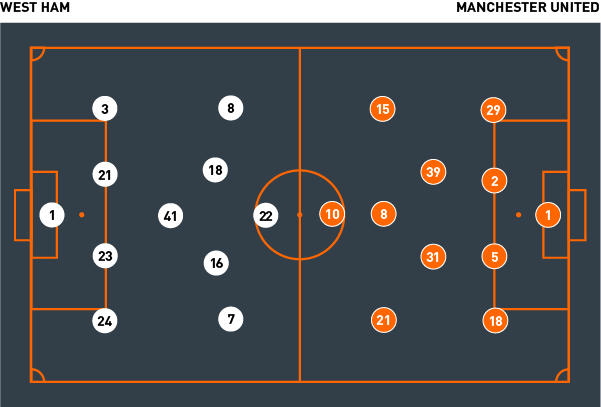 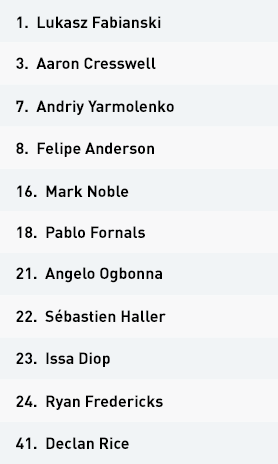 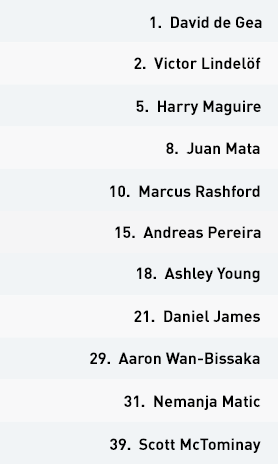 West Ham were organised into a 4-1-4-1 formation by Manuel Pellegrini, built on the single pivot provided by Declan Rice in between defence and midfield. Mark Noble advanced to support Sébastien Haller as the first line of pressure in what resembled a 4-4-2 when they were out of possession, but this invited Juan Mata to receive between the lines, where he could move away from Rice.

Much of their approach focused on finding Haller with vertical passes, from where the powerful striker won the first contact before attempting to link with Pablo Fornals, who advanced ahead of Noble. Both wide attackers – Felipe Anderson and Andriy Yarmolenko – occupied the inside channels, offering Haller further support, but each of those supporting midfielders made similar movements away from possession. If the idea to penetrate was positive, West Ham – and particularly Haller – often had too few shorter options on the occasions an incisive forward pass wasn’t realistic. On one of the few occasions both wide attackers managed to find space around Haller in advanced areas, they combined for Yarmolenko to open the scoring.


When Manchester United adopted a narrower shape during their use of a mid-block, spaces in central areas became limited; as such, West Ham dominated possession but rarely penetrated. The hosts therefore looked to build around instead of through Ole Gunnar Solskjaer’s team. Noble withdrew to assist Rice with switching play as their full-backs advanced, though Ryan Fredericks did so less than Aaron Cresswell, owing to the transitional threat posed by Daniel James.

United’s change of shape – they became more expansive after falling behind – gave West Ham improved access to their attackers, but the less mobile Noble was their key receiver and often more advanced than Anderson, Yarmolenko, or Fornals. Attacking plays that followed regains in deeper positions often lacked the necessary creativity to advance beyond United’s central defence, even with the visitors struggling for balance in midfield. As it was, the hosts didn’t need to be at their creative best to secure the three points against a poor United performance.

Manchester United used the 4-2-3-1 structure that has so regularly featured throughout Ole Gunnar Solskjaer’s reign as manager, this time featuring Juan Mata as their number 10. The Spaniard drifted to the left from his central starting position; with Mark Noble advancing from the West Ham midfield, Mata looked to exploit the spaces he vacated, creating a direct passing line from defence in behind the West Ham midfield.

From the right, United also found a more direct passing route towards Andreas Pereira or the withdrawing Marcus Rashford when West Ham pivot Declan Rice attempted to cover Mata’s movements. Mata then adjusted again to receive in the left inside channel, linking with forward runs in behind from Daniel James. Though United progressed possession through West Ham’s midfield, their attack lacked the ability to combine and penetrate, particularly when outnumbered. Using the double pivot of Scott McTominay and Nemanja Matic behind the ball further limited their attacking options between the lines.

West Ham largely attempted to find Sébastien Haller with direct forward passes, so United formed a mid-block, and their defensive structure became more narrow to restrict spaces around the striker and his supporting runners. This left spaces in wider areas and invited the crosses they ultimately defended well against, although Mata’s influence between the lines was reduced as a consequence. Pereira increasingly moved inside to offer an alternative option between the lines.


The combination of United’s ineffective attack and, gradually, their inability to retain possession contributed to that mid-block becoming more permanent, encouraging West Ham to switch play and build across the width of the pitch. Andriy Yarmolenko’s movement from wide on the right went untracked in the move that led to Manuel Pellegrini’s team taking the lead late in the first half.

In their attempts to respond during the second half, United’s midfield unit almost resembled a diamond; Matic sat in front of the defence while Scott McTominay advanced on the right, Mata attacked from the left and Pereira operated at the tip. Mata in particular looked to link defence to attack and aim balls in behind for Rashford and James, but their positioning – largely on the left – meant that those potential attacks were easily negated by the hosts’ recovering back four.

When Rashford’s injury robbed United of his threat in behind, both teams repeatedly attempted transitions – but United’s ineffective attack and expansive structure made it easier for West Ham to quickly advance possession. Solskjaer’s team lacked balance and support in deeper territory, but their attackers struggled to stretch the hosts’ powerful defence in what was a worryingly anaemic display.