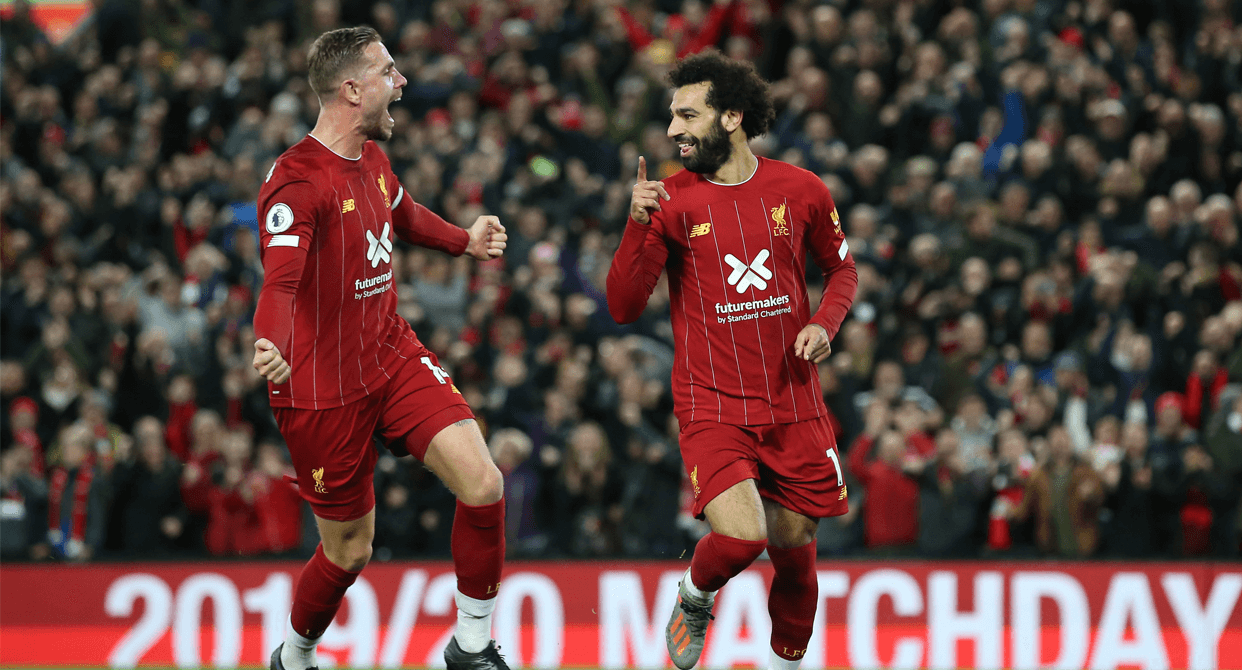 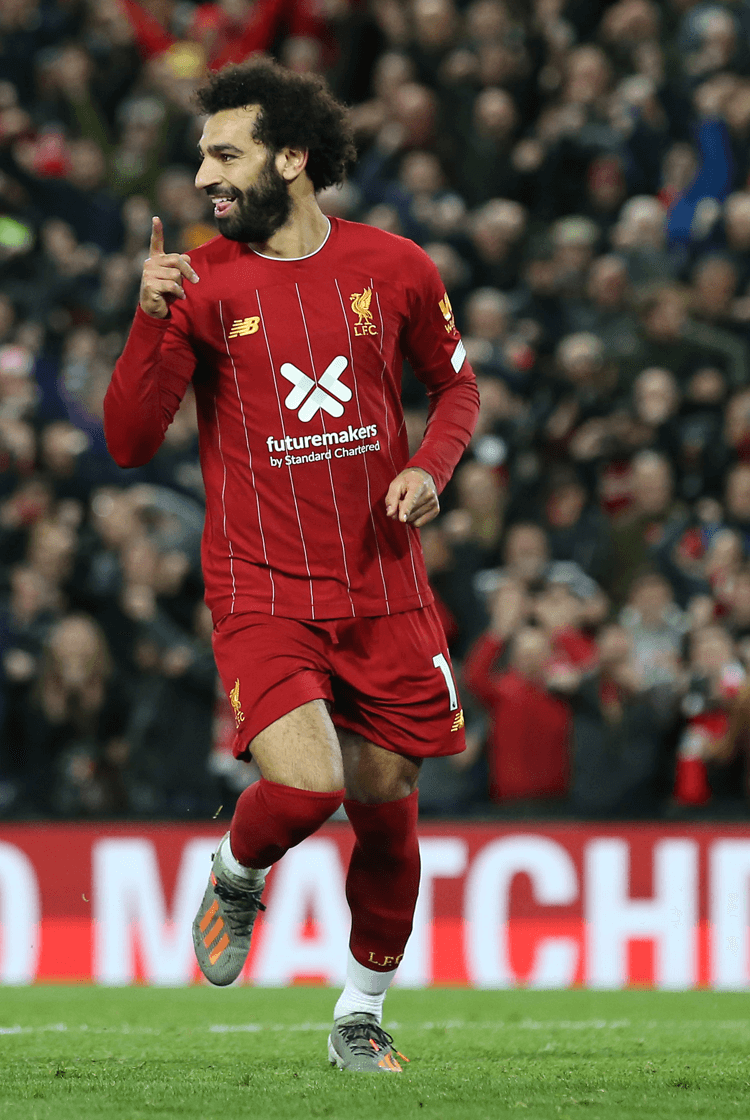 Premier League leaders Liverpool restored their six-point advantage over second-placed Manchester City after recovering from a goal down to defeat Tottenham at Anfield. Harry Kane's goal after 48 seconds put the hosts under pressure against the team they had defeated in the final of last season's Champions League, but an equaliser from Jordan Henderson early in the second half gave them further belief – and victory was secured when Mo Salah scored a 75th-minute penalty after Sadio Mané had been fouled by Serge Aurier in front of the Kop. Liverpool's recovery means they are unbeaten in the past 10 league fixtures at Anfield in which they have conceded the opening goal, while Spurs are now 11 games without an away league victory – their longest barren run on the road since 2001. 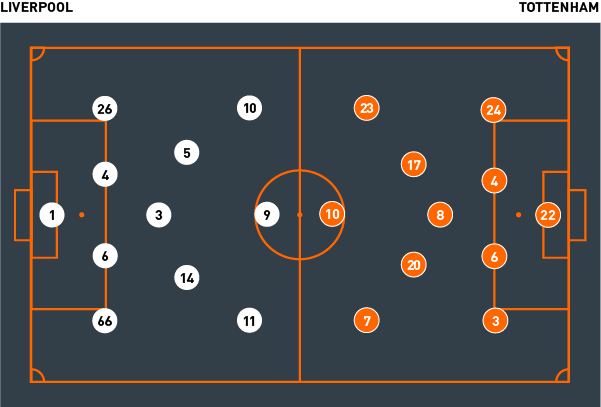 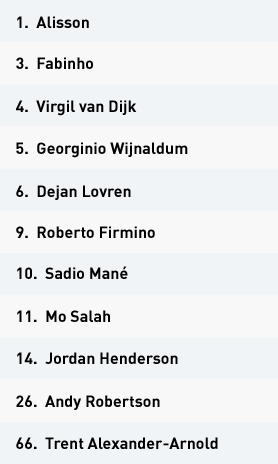 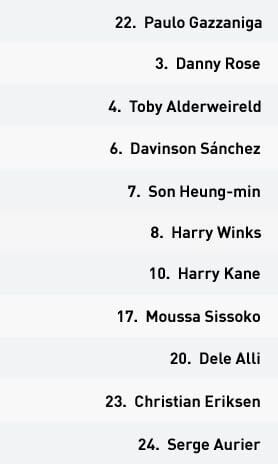 Liverpool started in their familiar 4-3-3 formation, at the top of which Jürgen Klopp reunited Mo Salah, Roberto Firmino and Sadio Mané. They were largely confronted with a deep, compact block, and as they struggled to penetrate beyond Tottenham’s three central midfielders they usually sought to attack with width.

The understanding between their full-backs, wider central midfielders and wide attackers was particularly influential in the goalscoring chances they created. Jordan Henderson was the most advanced of Liverpool’s three midfielders; he looked to make penetrative runs behind Tottenham’s defence, particularly between Danny Rose and Davinson Sánchez when possession had travelled wide to Salah or Trent Alexander-Arnold. When Henderson moved wider and Salah and Alexander-Arnold drifted inside, Tottenham's wider defenders were occupied by their movements; space was thus created from which to cross.

Liverpool also attempted to circulate possession in front of their visitors’ block, to tire their opponents and eventually decrease the speed of the press. Spurs were increasingly trapped in their defensive third and forced to defend against a seven-strong attack that excluded only Fabinho and central defenders Virgil van Dijk and Dejan Lovren.

It was in the final 20 minutes that the home full-backs assumed deeper positions in an attempt to draw Spurs’ midfielders away from the goal they were defending. When they did so, there was more space for them to attack into, so from a narrower starting position Salah was able to make runs to receive longer passes in behind the opposing defence.

Tottenham adopted a 4-5-1 shape out of possession, as wide attackers Christian Eriksen and Son Heung-min withdrew into midfield. Their early goal also meant that they spent much of the afternoon playing particularly defensively and attempting to remain compact.

The positioning of Eriksen and Son was particularly important given they made it a priority to close down Liverpool full-backs Alexander-Arnold and Andy Robertson. If possession went wide, Spurs defended with up to four players, often to discourage crosses being played; if this wasn't possible, further numbers withdrew into the penalty area to defend against aerial deliveries.

Single pivot Harry Winks was instructed to nullify the threat posed by Roberto Firmino when he withdrew into midfield; while he attempted to remain compact with his teammates, he also pressured the Brazilian immediately when possession travelled to him.

Liverpool’s attempts to circulate the ball also meant Spurs having to shuffle across, which tested their ability to continue to do so at speed and over the full width of the pitch.
In pictures

Mauricio Pochettino’s Tottenham operated in a 4-3-3 shape built on the three-strong midfield of Moussa Sissoko, Dele Alli and Harry Winks. They looked to attack in transitional moments, largely playing directly from goalkeeper Paulo Gazzaniga to Harry Kane, with Christian Eriksen and Son Heung-min looking to run beyond the striker from wider starting positions.

That they were positioned so deeply often undermined those attacks, however, because it took too long for those in deeper territory to offer support in the final third. They had a greater share of the ball after Liverpool’s equalising and winning goals, but the hosts’ intensity when they were chasing it meant that Spurs struggled to control it as they would have liked. That they adopted more advanced positions after conceding also made them more vulnerable during transitions, which contributed to them conceding the penalty from which Liverpool secured all three points.

The dominance of possession of Jürgen Klopp's team meant that they rarely had to defend from their 4-3-3 structure. When they did, they pressed Spurs in advanced territory, and if the ball was central Roberto Firmino adopted a position between Moussa Sissoko and Harry Winks to protect against overloads in midfield.

If they succeeded in forcing possession back to Gazzaniga, the wide attacker would press and screen passes back into central defence, inviting Spurs to instead play long. Fabinho was also particularly influential; his positioning restricted Kane and Alli from receiving to feet, while his awareness nullified potential counter-attacks and led to swift regains when possession was lost.

The Reds also advanced with numbers into the final third. Their press was most commonly evaded with direct passes forward, but a combination of Virgil van Dijk, Dejan Lovren and Fabinho defended these comfortably for much of the match.