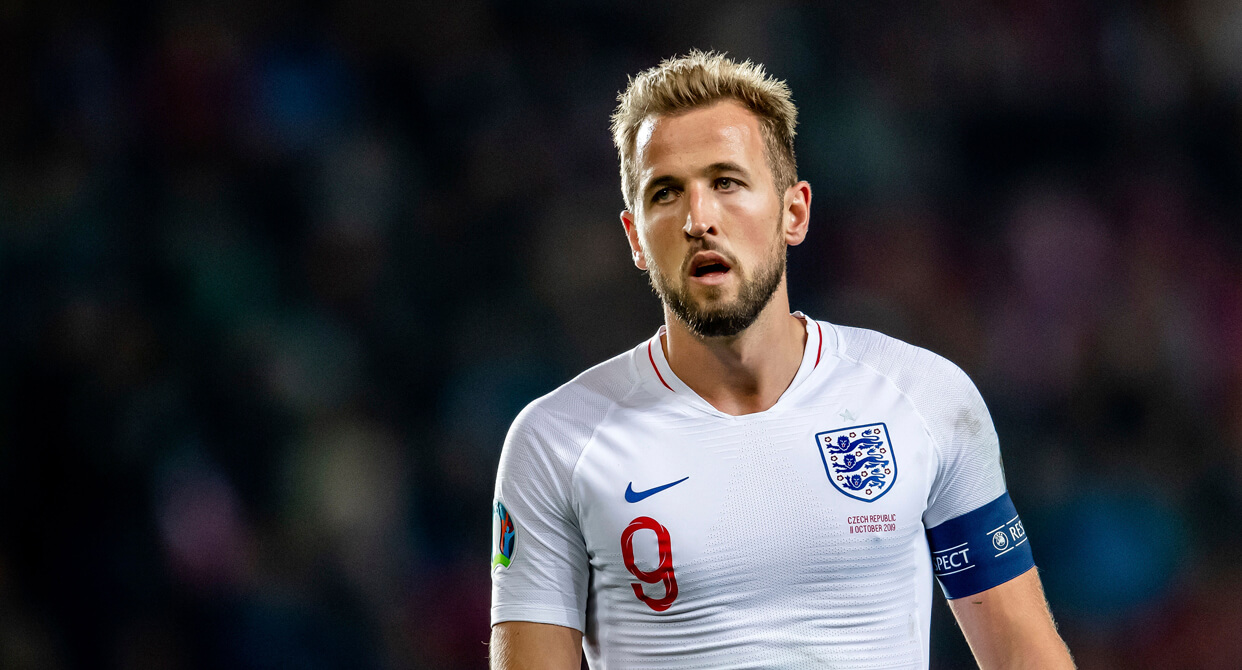 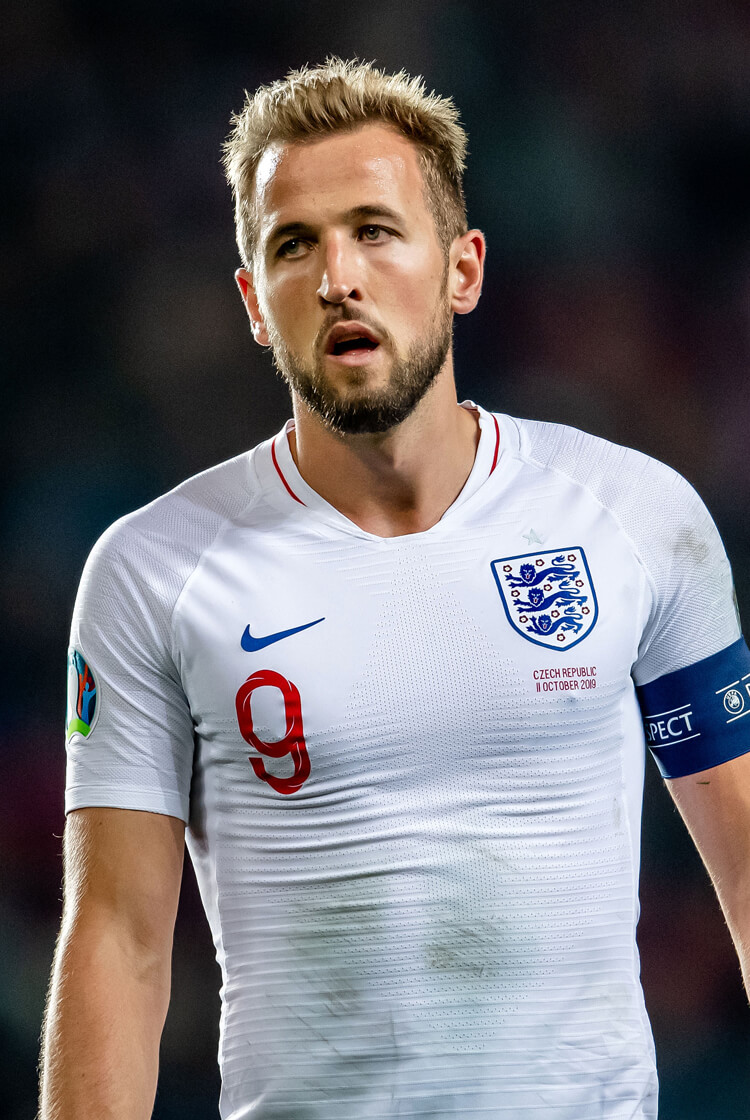 England’s seemingly serene run to the Euro 2020 finals hit a block in the road with a surprise defeat to the Czech Republic in Prague. Gareth Southgate and his team had won their first four qualifiers with relative ease, and looked to be heading for victory number five when Raheem Sterling drew a foul in the hosts’ area within the first five minutes. Harry Kane stepped up to score his 27th England goal – he now sits joint 12th with David Platt on the all-time list – from the spot, but the visitors put in an otherwise anaemic display going forward. The Czechs equalised soon after falling behind, Jakub Brabec slotting home as England failed to deal with a corner, but had to wait until five minutes from time before netting a deserved winner through substitute Zdenek Ondrasek. Three points drew the hosts level with England at the top of Group A, although Southgate’s team retain a game in hand. 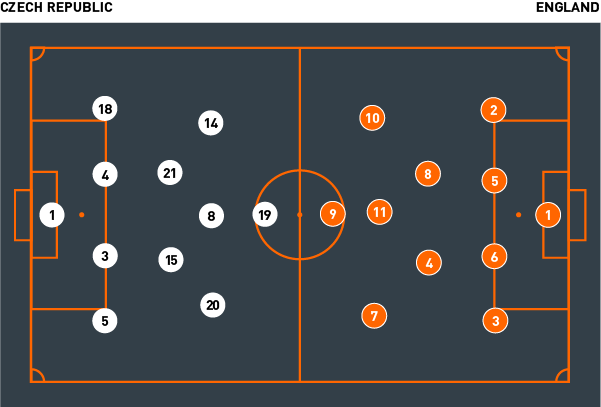 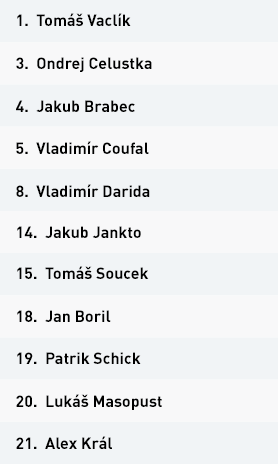 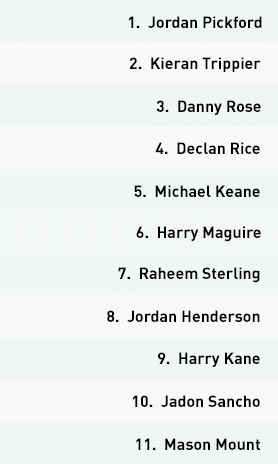 Czech Republic were organised by their manager Jaroslav Silhavy into a 4-2-3-1 formation built on the double pivot provided by Tomáš Soucek and Alex Král in central midfield, and led by lone striker Patrik Schick. They attempted to build possession from the back before attacking out wide, using positional rotations to draw England into pressing individuals and therefore creating space around others.

Either Soucek or Král regularly withdrew alongside the hosts’ two central defenders to create a line of three capable of overloading England’s front two during their mid-block phases, and by extension freeing up one of their full-backs to receive beyond England’s midfield line. Gareth Southgate’s team struggled to negate their attempts to do so during the first half and, with Soucek and Král also switching with Vladimír Darida to become the central attacking midfielder, they were also troubled by their vertical rotations.

It was in those situations that the Czechs attempted to move possession inside and then immediately into the wide areas in search of overloads. In the final third their opportunities were most commonly shots from distance and set-pieces, but they also posed a creative threat through combinations and blindside movements when again attempting to free up an attacking individual.

Out of possession, England used a 4-4-2 mid-block formed by Mason Mount advancing to join Harry Kane, and Jadon Sancho and Raheem Sterling withdrawing and tucking in alongside Jordan Henderson and Declan Rice to form a four-strong midfield. Kane and Mount pressured the opposing central defenders while seeking to screen passes into the hosts’ double pivot.

When possession travelled wide, Sancho and Sterling were instructed to close it down as Henderson and Rice moved across; the visitors also waited for triggers to press with intensity, notably a pass back to the goalkeeper or into a wide attacker. If possession reached a wide attacker, the full-back would move tight to prevent him from turning, ensuring a backwards pass, which in turn would be followed by a higher-intensity press.

For all of the disappointment surrounding their performance, by defending this way England restricted their hosts to few significant goalscoring chances; the goals they conceded were in transition and from a poorly defended set-piece. It was in possession that their struggles largely occurred.
In pictures

England returned to Gareth Southgate’s 4-2-3-1 formation, in which Jadon Sancho, Mason Mount and Raheem Sterling operated as three attacking midfielders in support of lone striker Harry Kane. They attempted to build through the middle before releasing Sancho and Sterling in behind. Kane also withdrew to receive; as he did so the two wide attackers would advance, but owing to their inability to bypass the Czechs’ defensive block they switched to a 3-4-2-1 – closer to the shape they used as they advanced to the semi finals of the 2018 World Cup.

By doing so, they were able to overload the first line of the press and play with width into more advanced territory; Danny Rose tucked in to play as the left-sided central defender, Kieran Trippier and Sterling played as attacking wing-backs, and Sancho moved inside alongside Mount. The freedom with which Sancho and Mount were encouraged to move tested those defending against them because of their dilemma in either following them or holding their position.

Where England then disappointed was that, despite the potential of the new structure, they played largely in front of their opponents’ defence and midfield, and offered minimal movement in behind – not least with Kane withdrawing to receive to his feet. With the hosts therefore largely comfortable while defending – to the extent they essentially encouraged Southgate’s team to have possession in certain areas – that 3-4-2-1 became a 4-1-4-1 in the second half. Jordan Henderson adopted an attacking-midfield role while Declan Rice played as the lone defensive midfielder.

Their subsequent increased presence between the lines was intended to tempt the Czech defenders to advance to press, and therefore create spaces in behind, but this also rarely happened. Two opportunities fell to England during the second half, but on each occasion Sterling and Kane used the wrong foot; the bigger concern, however, was the few chances the team created, largely through a lack of movement offered in the final third.

Out of possession, Czech Republic’s 4-2-3-1 shape became a 4-4-2 mid-block, with Vladimír Darida advancing to join Patrik Schick on the top line. When they pressed, wide midfielder Jakub Jankto and Lukas Masopust advanced to form a 4-2-4 – with England’s six deepest players now occupied, Jordan Pickford was forced into playing longer passes.

The hosts’ wide midfielders also doubled up with their full-backs on England’s wide attackers by pressing them from in front and behind if they received to feet. Even when Southgate’s team adopted a back three, their five deepest players were still the focus of the Czechs’ defensive approach, in which they also occasionally moved into a 5-2-3, and Jankto withdrew into defence to counter Trippier’s advanced position. The combination of that, and their dedication to remaining compact and screening cutbacks, continued to frustrate their visitors as England fell to a first qualifying defeat in a decade.