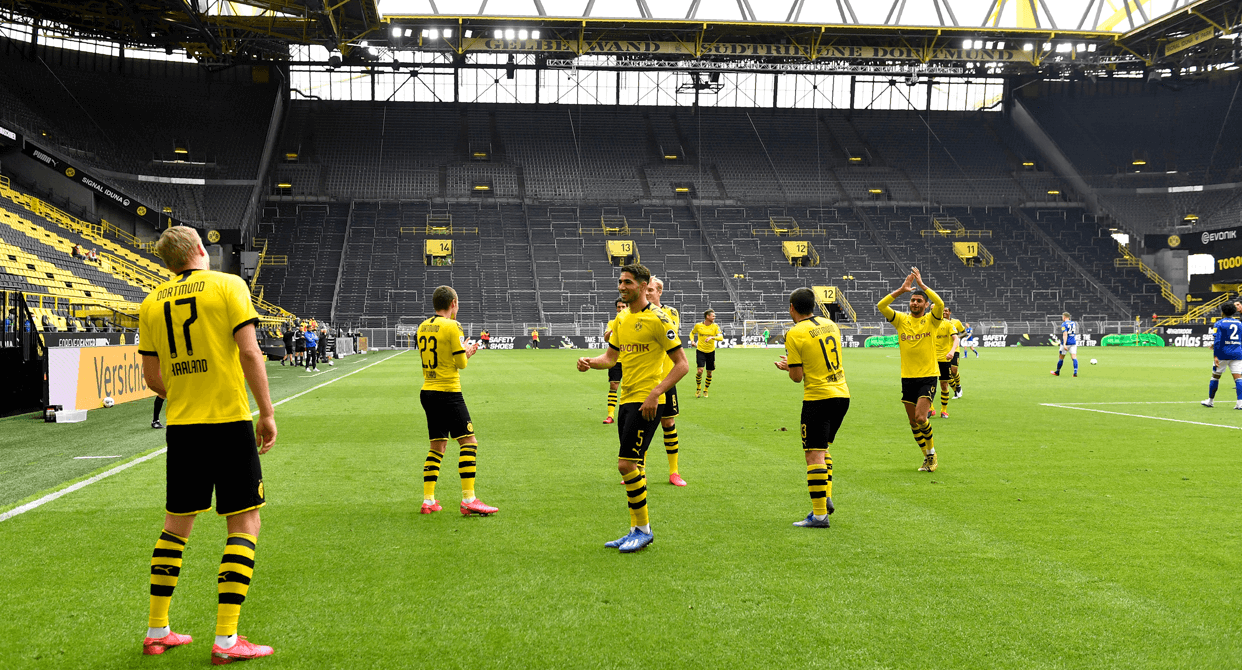 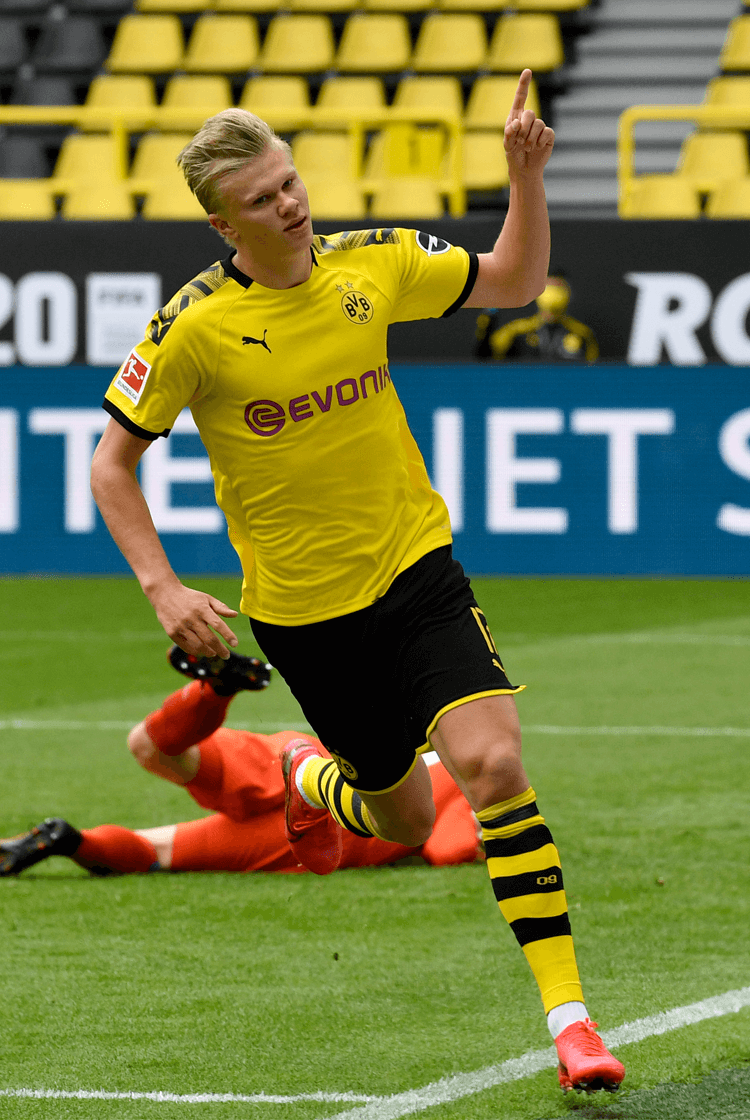 Borussia Dortmund marked the Bundesliga's return with a convincing victory in the Revierderby against FC Schalke 04. The prolific Erling Braut Haaland gave them the lead, before two finishes from Raphaël Guerreiro and another from Thorgan Hazard rewarded the extent to which they outplayed their visitors to the Signal Iduna Park Stadium. Behind closed doors owing to the coronavirus outbreak, every shout made by players or coaches could be heard, and social distancing measures were observed by substitutes and during goal celebrations. First-placed Bayern Munich restored their four-point lead over Dortmund by beating FC Union Berlin 24 hours later, but Dortmund will be presented with the opportunity to again narrow that gap when they host the league leaders on May 26. 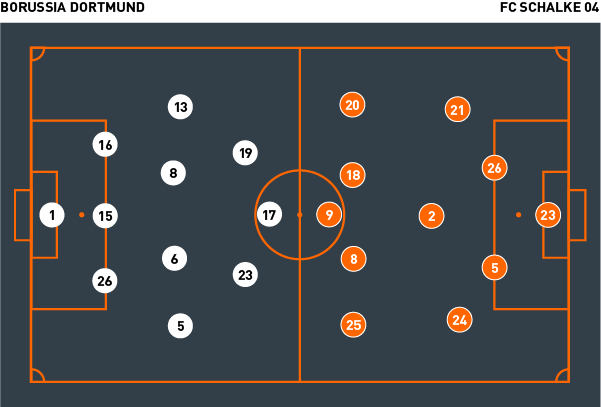 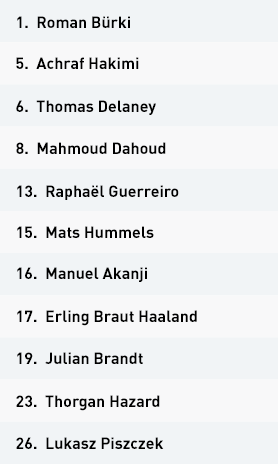 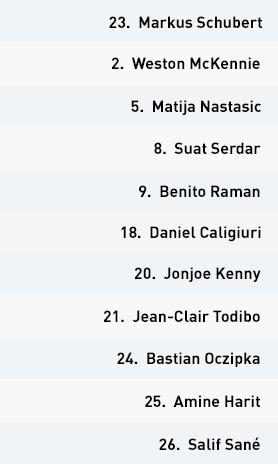 Lucien Favre set Borussia Dortmund up in a 3-4-3 formation while they had possession; Achraf Hakimi, Mahmoud Dahoud, Thomas Delaney and Raphaël Guerreiro formed their midfield, and Julian Brandt and Thorgan Hazard supported Erling Braut Haaland in attack. FC Schalke 04 defended with a 5-4-1, through their wing-backs Jonjoe Kenny and Bastian Oczipka withdrawing to form a back five.

Dortmund had to find a way through two forms of defence – a mid-block and a high press – from their opponents and they successfully negotiated both to advance beyond Schalke’s midfield. When Schalke pressed, Dortmund’s back three circulated possession to draw Schalke’s players into the wide areas. Schalke used their wide forwards, Amine Harit and Daniel Caligiuri, to press Dortmund’s wide central defenders, when their central midfielders and the aforementioned wing-backs offered support as they went man-for-man with their opponents. The central midfielder marking Delaney or Dahoud withdrew slightly to attempt to block a more threatening pass to Brandt or Hazard – a trigger for Brandt or Hazard to withdraw and add an extra number in midfield and to occupy the ball-side central midfielder, leaving Delaney or Dahoud free to receive possession from the wing-back while facing forwards, and therefore in a position to launch an attack.

When Schalke operated in a mid-block, their wing-backs joined their defensive line and their midfield four remained compact in an attempt to prevent forward passes. Dortmund used the movement of wide attackers Brandt and Hazard to adopt an asymmetrical structure, and to create an overload created on one side of the pitch.


Oczipka and Matija Nastasic charged out as soon as play was switched to the left in an attempt to prevent passes to Haaland, Hazard or even Hakimi, but doing so created vast spaces behind them, ultimately inviting Dortmund to easily advance beyond their defence – with a player making a run towards possession before sprinting in behind for a pass over the top. If this led to a number of chances for Dortmund during the first half, it was also instrumental in the build-up to their first goal – scored by Haaland, and created by Hazard with a cross from the right.

A half-time change in shape from Schalke manager David Wagner meant them using a back four and a midfield diamond when they were out of possession. This significantly improved their management of space when Dortmund had established possession, and encouraged them to lay pressing traps in wide areas to try and regain possession; the defensive midfielder, Weston McKennie, was also free to follow any attacker who withdrew to between the lines, therefore allowing their back four to remain intact.

Dortmund posed a major threat in transition, and one that was all the more dangerous because of Schalke’s in-possession structure. At the point of a turnover, they sought to release their wing-backs and wide attackers to support Haaland and to create a five-strong attack. This was most commonly actioned with a diagonal pass into the opposite half-space, allowing the receiver to adopt a body shape that encouraged them to continue advancing. Two of Dortmund’s four goals came as a result of quick transitions.

FC Schalke 04 were organised by their manager David Wagner into a 4-1-5 formation, built on Weston McKennie operating as their sole central midfielder, during the periods they had possession. They encountered hosts defending with a 5-4-1 mid-block, through Achraf Hakimi and Raphaël Guerreiro withdrawing into defence.

Borussia Dortmund occasionally pressed their visitors in advanced territory, through their front three closing down Schalke’s central defenders and forcing possession wide, but their most common defensive approach relied on their mid-block. Schalke circulated possession among their back four and McKennie before switching it into the wide areas; when they succeeded, if their full-backs advanced to support attacks, their five-strong attacking line was able to create two-on-ones against those defending for Dortmund.

That their hosts were so organised, and therefore convincingly moved across to negate penetrative passes into half-spaces, regardless undermined their attacking potential. Thomas Delaney and Mahmoud Dahood largely remained free in central midfield to prevent Schalke building possession there because Julian Brandt and Thorgan Hazard worked to screen balls from central defence towards Suat Serdar and Daniel Caligiuri. Manuel Akanji and Lukasz Piszczek, similarly, moved with Serdar and Caligiuri if they withdrew to towards possession. If Schalke succeeded in playing through Dortmund’s defence, the individual receiving possession would therefore only do so with his back to goal, and while under pressure.


The flat positioning of those around him also meant that McKennie or those defenders further back represented his only passion options and, given McKennie was too often outnumbered, the possession they had regularly offered little. Dortmund also invited Schalke to play possession wide, in the knowledge that they would outnumber their opponents there, and their visitors’ poor movement and struggles to create chances contributed to them being particularly vulnerable during transitions.

Erling Braut Haaland, Brandt, Hazard, Delaney and Dahood were all positioned centrally, and ready to break during transitions. Combined with, from wide, Hakimi and Guerreiro, and with Schalke’s struggles in possession and to offer sufficient protection behind the ball, a one-sided affair was the outcome.