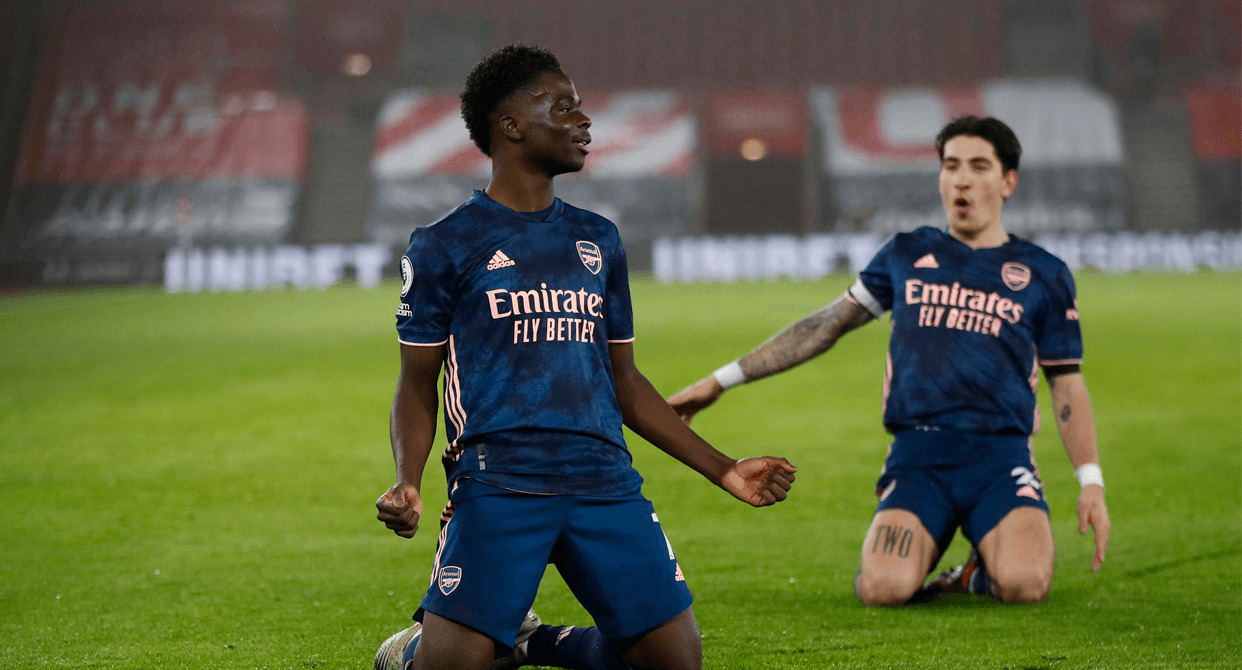 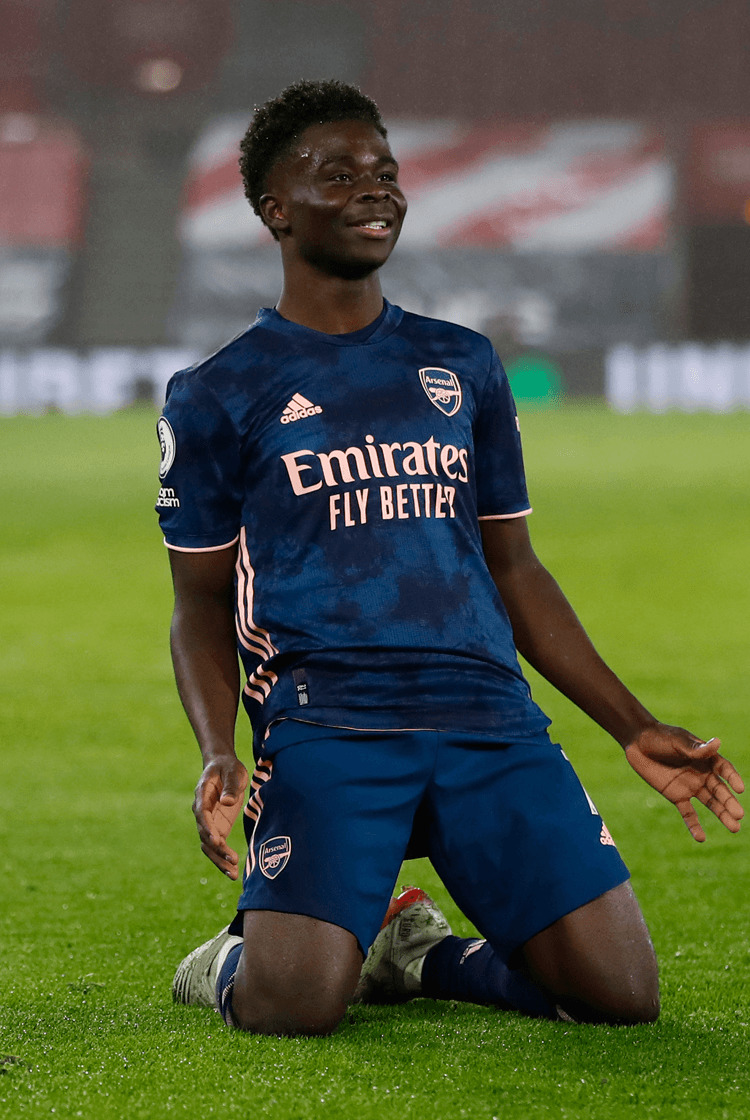 Arsenal continued to revive their season by recording their fifth victory from six in the Premier League, despite the absence of their captain Pierre-Emerick Aubameyang. They fell behind in only the third minute when Stuart Armstrong scored for Southampton, who at the weekend eliminated them from the FA Cup, but in a sign of their growing confidence were level five minutes later through a finish from Nicolas Pépé. Further goals from Bukayo Saka, shortly before half-time, and late in the second half from Alexandre Lacazette – both have been influential in transforming their form – secured their latest three points. "I don't want to look at the table," said their manager Mikel Arteta, after they moved to eighth. "I want to look at ourselves; how we can get better; the reason we are playing better and winning football matches." His opposite number Ralph Hasenhüttl said: "The quality wasn't good enough to be competitive against this team. We know that we are a good team if everything is perfect and we are in a good shape." 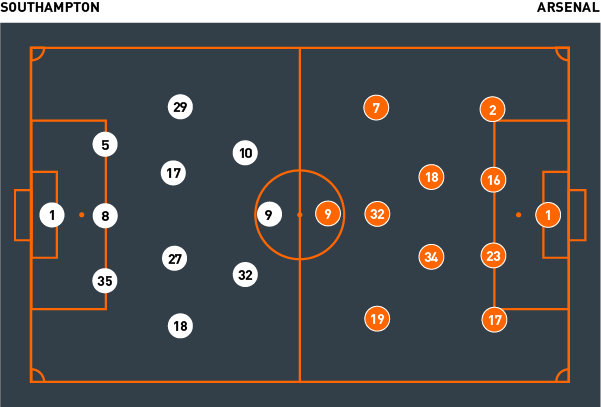 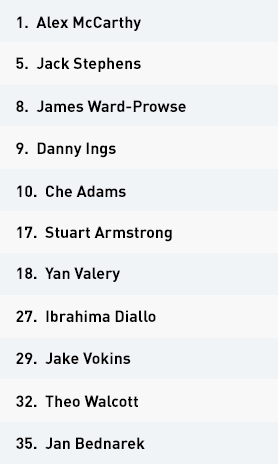 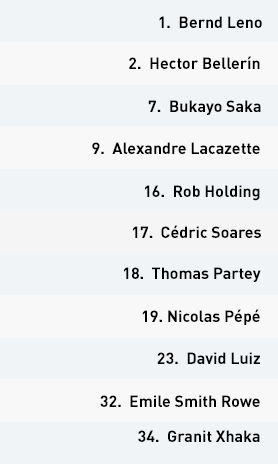 Southampton manager Ralph Hasenhüttl set his team up into a 3-4-3 formation in which James Ward-Prowse featured in central defence, between Jan Bednarek and Jack Stephens. Arsenal remained in a 4-2-3-1.

The hosts most consistently build with a 2-4-4, but by Ward-Prowse adopting that deeper position, Jan Bednarek and Jack Stephens moved wider, leaving Alexandre Lacazette and Emile Smith Rowe with increased ground and an additional number to cover when applying Mikel Arteta's desired press. From the right, Yan Valery advanced sufficiently far that Theo Walcott withdrew into the relevant half-space to also often provide an additional midfielder.

There were similarly occasions when Ibrahima Diallo moved into Ward-Prowse's starting position, creating a potential false full-back and also attempting to commit Bukayo Saka to the ball to free up further space for Jake Vokins. Against that, Arsenal sought to adopt aggressive positions and to apply an intense press intended to overcome the numerical superiority Hasenhüttl's team strived to achieve, and to force a quicker, less methodical build-up, and ultimately turnovers. That aggressive positioning was also rewarded when Arsenal scored their equalising goal.


Southampton's shape encouraged them to use combinations in wide areas; a diagonal pass to their wide midfielders, who in turn had the relevant central midfielder and wide forward available as options, was their most common route around Arsenal's press whether their attacks continued with width or were taken infield and followed by a switch of play. For all of their potential, however, they struggled to take advantage of the spaces that existed behind Arsenal's defence.

Arsenal's defenders followed those moving to receive in those areas, preventing them from receiving, turning and advancing and instead making it necessary for them to instead set possession to or find a teammate. Danny Ings and Che Adams regularly sought to support by offering a passing option to feet, but their runs in behind were less common, contributing to the reduced threat Southampton offered in behind.

Arsenal were organised by their manager Mikel Arteta into a 4-2-3-1 formation led by Alexandre Lacazette. Their hosts, Southampton, defended with a 4-4-2.

If that meant Arsenal's furthest full-back remained free, the pressure Southampton were applying was effective enough to prevent the in-possession player seeing him and executing a switch of play. Arsenal, in response to Southampton's narrowness, sought to take the ball to where they felt more comfortable before switching play and, while Southampton defended against those efforts by the relevant full-back moving to the ball as it arrived, Arsenal were eventually rewarded for doing so when they scored their third goal.


When they were attempting to build possession Arsenal were often forced to play into the wide areas of the pitch. As they did so, however, Southampton sought to trap them there and to therefore tempt a diagonal pass back infield, a pass they would then press and often make regains from – something Arsenal struggled to adjust to.

It was Arsenal's speed of play that posed the greatest threat. Southampton's intensity and organisation meant that they would have to both think and play quickly to evade the press they were being confronted with; passes were played to their full-backs, and a diagonal pass into either Lacazette or Smith Rowe – both adopted a deeper position to receive – followed before a further pass was played into the forward runs of Bukayo Saka or Nicolas Pépé.

Lacazette and Saka also offered contrasting movements to stretch's Southampton's defence and, via them doing so, Arsenal occasionally succeeded in accessing the spaces behind that defence, which regardless was helped by the often successful recovery runs made by Jan Bednarek and Jack Stephens.

All three of Arsenal's goals owed to their tactical approach. The first came off the back of an effective press, the second after a quick attack upon a regain, and the third through a switch of play. Southampton's control may have been greater during the periods of established possession, but Arsenal's approach ultimately proved more effective.