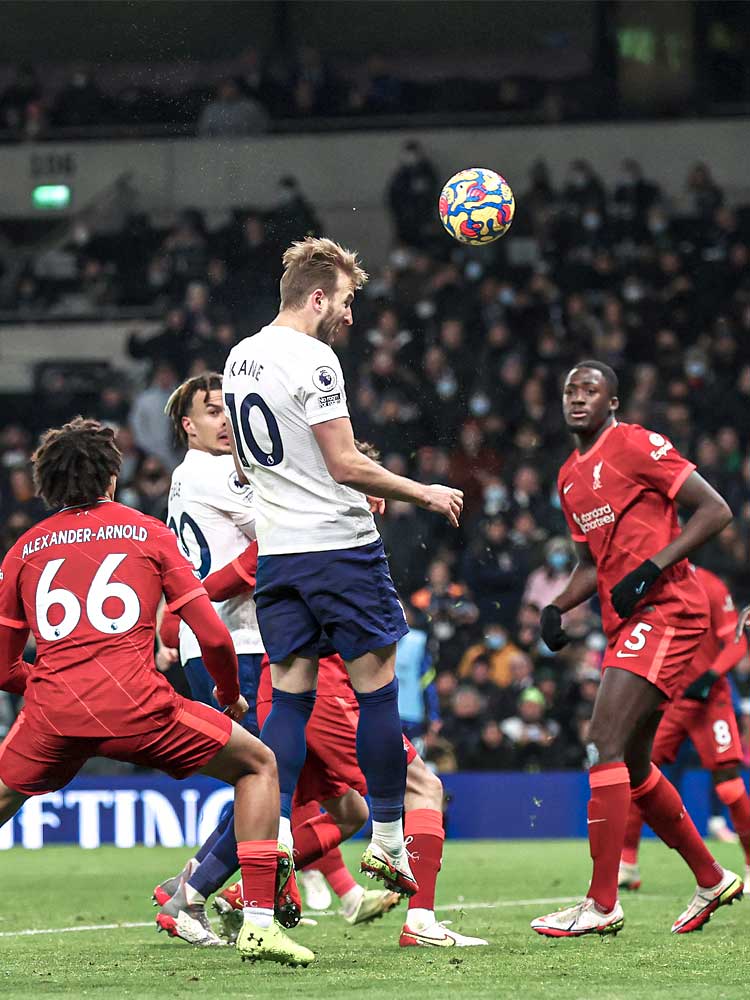 Harry Kane ended his goal drought in the Premier League as Tottenham showed further signs of improvement under Antonio Conte to secure a draw that could prove influential in the race for the title. The striker had last scored in the competition on October 17, but after giving his team the lead he saw Diogo Jota and then Andy Robertson strike for Liverpool. Strike partner Son Heung-min scored their equalising goal, three minutes before Robertson was sent off, leaving second-placed Liverpool three points behind Manchester City heading into Christmas.

Liverpool believed Kane should have been dismissed during the first half, and their manager Jürgen Klopp said: "I think we all agree it is a clear red card, I just need to ask two people, [referee] Mr Tierney and whoever was the VAR. You can give Robertson a red card, he knows that himself, but Harry should not have been on the pitch in the second half."

Conte said: "To take one point against Liverpool is good. We’re talking about one of the best teams in the world. They are a point of reference for us to work hard and try to be closer to them. It won’t be easy. They’ve created something special for all these years. To play against Liverpool is not easy. You have to be prepared to suffer. We created many chances. In the second half there was more balance. [It is] a good point, but if we want to improve we have to think we should be disappointed to only get one point."

Leading with a front two
Antonio Conte organised his team into a 3-5-2 formation (below) led by the front two of Son Heung-min and Harry Kane. They were supported in wide areas by wing-backs Emerson Royal and Ryan Sessegnon, who attacked around Liverpool's full-backs. Kane and Son provided direct runs in behind Liverpool's back four; these were often targeted by direct balls from the back three.

Attacking on the counter
Spurs posed their greatest threat after they made regains and launched quick, direct counter-attacks. At the top of their out-of-possession 5-3-2, Kane withdrew to link with the midfielders or hold the ball up and encourage others to make runs in behind, while Son regularly provided penetrative movements in behind (below). The quality of their movements served to beat Liverpool's midfield screen regularly, and took them into spaces in behind the visitors' central defenders. With Liverpool's full-backs typically advanced, they struggled to make consistent recovery runs.

Success on the right
When Liverpool's central midfielders covered access into Son and Kane (below), the hosts attacked with width – and were particularly effective on their right. With Tyler Morton protecting the spaces ahead of the Spurs front two, Tanguy Ndombele was regularly free in the right inside channel. With Andy Robertson drawn infield to remain close to his centre-backs, Ndombele was able to find right wing-back Emerson in space from which he could deliver crosses into the Liverpool area. The visitors' front three rarely tracked back to guard against such advances from the Tottenham wing-backs, but their final delivery too often lacked the quality and accuracy to trouble the Liverpool back line.

Direct play
Spurs also showed promise from more direct forward passes, particularly those complemented by runs from Dele Alli through the left inside channel. Morton continued to prioritise covering access into the feet of Kane and Son, while the midfielders either side of him marked Ndombele and Winks. This left Alli free to time his forward runs, where he was found by accurate forward passes from the back three (below). The space between Trent Alexander-Arnold and Joël Matip was repeatedly targeted, with the former at risk of being stretched by Alli and left wing-back Ryan Sessegnon. Spurs' second goal came through them targeting the left inside channel and Son penetrating in behind.

Problems with the Tottenham press...
Liverpool set up in a 4-3-3 formation from which full-backs Trent Alexander-Arnold and Andy Robertson were key to progressing possession against Tottenham's out-of-possession 5-3-2. The closest of Spurs' central midfielders moved wide to press the relevant full-back whenever either Alexander-Arnold or Robertson had the ball in space. When either Harry Kane or Son Heung-min covered access back infield to Tyler Morton, who started in the single-pivot role usually filled by the absent Fabinho, their remaining midfielders pushed across to mark James Milner and Naby Keïta. This maintained a numerical balance in midfield and discouraged Liverpool from building in central areas. The front three of Mo Salah, Sadio Mané and Diogo Jota faced an overload against the Tottenham back line of five.

... and adjusting to deal with it
Direct switches of play between Liverpool's influential full-backs helped in their attempts to bypass the Spurs midfield press. Milner looked to withdraw from central midfield, tempting his opposite number to follow him (below) and increasing Robertson's freedom. Right wing-back Emerson Royal therefore had to move wide to cover Robertson, with Davinson Sánchez forced to follow Sadio Mané into deeper areas. This worked to create spaces in the Spurs defence, as was seen in the build-up to the visitors' equalising goal, when Robertson was free to cross for Jota.

Jota's influence in midfield
To continue to stretch Spurs during the second half, Liverpool's full-backs adopted positions beyond the Tottenham midfield line. This made it harder for them to recover back into defence when Spurs counter-attacked, but they posed an increased threat in the attacking half – and this drew Emerson and Ryan Sessegnon out of their preferred positions. Infield runs from Liverpool's wide forwards discouraged Spurs' central defenders from pressing into midfield, leaving Diogo Jota free to drop and support Liverpool's midfield progress (below).

Reorganising into a 4-2-3-1
The consistency of Tottenham's 5-3-2 defensive block placed an increased importance on the combinations Liverpool could create in the centre of the pitch. As a result, they adopted a less familiar 4-2-3-1 shape in which substitute Roberto Firmino featured as their number 10 and Salah as their central attacker. With Jota and Mané operating as the wide forwards and their full-backs providing the attacking width, Keïta and Milner provided defensive protection as the double pivot at the base of midfield. The new shape meant Robertson and Trent Alexander-Arnold advanced earlier, allowing Jota and Mané to move inside and get closer to Firmino and Salah.