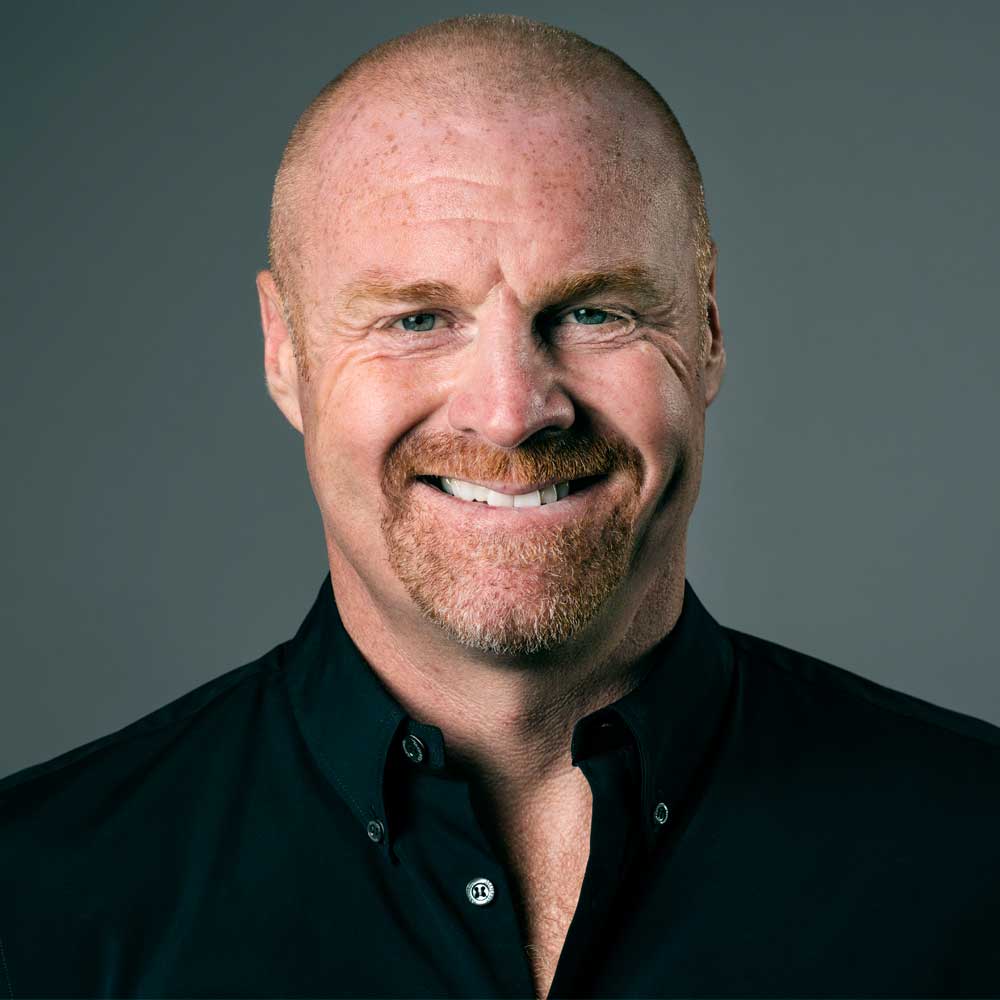 The road to Europe

At half-time of every game, me and my coaches will always get together to talk things over.

After the first half of our game away to Chelsea in August 2017, though, the Burnley coaching staff had a bit of a conundrum.

We’d gone down there knowing how tough it was going to be. On the opening day of the season, away to the reigning champions, you can’t really expect that you’re going to get too much from it.

But we started the game well, and then Gary Cahill got sent off after 14 minutes. After Sam Vokes put us ahead, I started to wonder if this might be our day. Then Stephen Ward got a second, and Vokes got another.

We were 3-0 up at Stamford Bridge. At half-time!

In the changing room, the staff got together in a quiet corner to talk about what we’d say to the players.

Ian Woan, my assistant, asked me what I was going to say.

“I haven’t got a clue!” I replied. “I wasn’t planning on being 3-0 up! I'd not even considered this scenario before the game.”

It was such an unfamiliar situation. If I’m honest, all we could do was laugh. With all the positivity in the world, we could never have expected this.

"That summer, it had felt like we were doing something good together because the atmosphere was great"

I asked the players for more of the same, but being in that kind of position does strange things to you. The players didn’t really know whether to pile forward and try to score a few more goals, or sit back and defend the lead. They lost their way a little bit.

Chelsea got a goal back, and – credit to them – there was a point with about 15 minutes to go when they were just flying forwards. They left one at the back and they were looking like they might get back into the game.

In the end, we clung on for what was a famous win. It was a fantastic day for the fans, and they clearly enjoyed the win.

We’d done plenty of team-building exercises, and they were starting to bring results.

Footballers will roll their eyes and moan at just about anything you suggest, but as soon as you introduce an element of competition, they’re all in. Give them a quiz and they’ll be as competitive as they are out on the pitch within five minutes.

That summer, it had felt like we were doing something good together because the atmosphere was great – and in spite of the fact that we’d lost some really big players.

Michael Keane had gone to Everton for big money, and Andre Gray, who’d done really well for us, had moved to Watford. Joey Barton had retired, and we also lost George Boyd, who had been really important for us.

We brought in Phil Bardsley, Jack Cork, Charlie Taylor and Chris Wood, and they were the kind of characters who fit right in. There were leaders in the group who helped bring everyone together.

"As we approached Christmas, we were fifth in the table. We were flying"

I’d always had a soft spot for Woody, because he’d played a lot of first-team football from a very young age. That showed how strong his mentality was.

The thing that really attracted me to him, though, was that he always found a chance. Even when it was clearly not his day, he’d be working hard, bustling away, and he’d get one chance. Every time he played, he’d make sure to get one opportunity, sometimes out of nowhere.

For a team like Burnley playing in the Premier League, that is an extremely valuable quality. He was a really important signing for us.

But every summer at Burnley was a reset. No matter what happened the year before – good, bad, indifferent – we had to reset.

It was difficult to get the players in who we wanted. It was hard to get investment from the board, and we’d have to wait around and see who we could get. We couldn’t go out and cherry-pick the players we wanted, and change our style of play based around a load of new signings. It was never that easy.

As a result, building on a previous season’s success was never a guarantee. On this occasion, we’d survived in 2016/17, our first season in the Premier League after promotion. Although we weren’t just hoping to survive again, we certainly weren’t thinking about the top half of the table.

We always had to go into a season with the same mentality: that it was going to be incredibly tough for us, and we were going to have to work hard to achieve what we wanted. It was the same that summer, once again.

"I went into the boardroom demanding we targeted new signings in January. They looked at me like I was barmy"

The players we’d brought in quickly understood that. They understood what Burnley life was like, and on a personal level they fitted in with the other players really well. Everyone was getting on and, after a good pre-season, I could sense a good connection among the players, and a fantastic feeling in the squad.

That doesn’t guarantee you positive results, but it does make them much more likely. And they kept coming for us at the beginning of that season. Nothing compares to winning games when it comes to team-building.

We got draws away to Tottenham, Liverpool and West Ham, and beat Everton, Southampton, Crystal Palace, Newcastle and a few other teams. As we approached Christmas, we were fifth in the table – one point off Arsenal in fourth, and in really good shape. Against all expectations, we were flying.

As the fixtures started to build up, I was thinking about investment. I went into the boardroom demanding we targeted new signings in January. They looked at me like I was barmy.

“We’re fifth in the table and you want more players?”

That was always the real challenge at Burnley. I always wanted to go further. I wanted to push on and keep chase with the top four, but it was so hard for the club to maintain a challenge at the end of the table.

"In that bad run, it never really felt like things were going off the rails"

At that level, I knew how tight the margins were. Eight of our nine wins by that stage had been by the odd goal, so I felt very aware of how quickly things might change for us.

That mindset was actually very useful for me in a completely different way soon afterwards, when we hit a rough patch. After winning nine of our first 17 games, we went 11 matches without a single win.

Again, though, I could see that the quality of our performances hadn’t changed much. In that 11-game run, we only lost by more than a single goal once. Many of our draws could quite easily have been wins.

We went 2-0 up at Old Trafford, and only drew after conceding a 91st-minute equaliser (above). We got a draw against Manchester City in the season when they went on to hit 100 points. And, thanks to a last-minute goal, we lost 2-1 to Liverpool.

The reality of the Premier League is that you’re going to have a rough patch. These players had overachieved up to that point, and even the best teams have bad runs. You have to be rational about it; we were playing the best teams in the country, so it was only natural that we’d hit the skids a little bit.

I told the team to keep doing what they’d been doing. There was no reason to change our approach. We’d been playing much of the season in a 4-4-1-1, with Jeff Hendrick in behind a lone striker. It was a departure – albeit a small one – from the 4-4-2 that we used for most of the rest of my time at Burnley. That season, though, it worked really well for us.

If I’m completely honest, making that change was, first and foremost, a defensive move. I wanted us to have another player closer to our midfield two against teams that played with three in central midfield. Away from home, in particular, we played that way, and we ended the season with the sixth best away record in the league.

In the end, we had even more in attack. Jeff had a great knack for arriving late in the box, and he really should have got more goals than he did. The wide players also got forwards more.

In that bad run, it never really felt like things were going off the rails. Even at eight, nine, 10 games without a win, I wasn’t too worried. I was fortunate to have the full backing of the board, who were relaxed about our form, and knew that things would turn around eventually.

That relaxed attitude filtered down to the players, who were free to play without too much pressure on them. They deserve full credit for what happened next.

We played Everton at home, who were chasing us down while we clung on to seventh place. It was another really tight game, just as most of our games had been. This time, luck was on our side.

Shots that had been hitting the post started going in. Decisions started going our way. I think it was Gary Player who once said: “The harder you work, the luckier you get.” It’s a quote I love, and my team worked so hard to change their luck. We went 1-0 down, but scored two second-half goals and got a really important win.

"within three days of the season finishing, we were thinking about the next campaign"

A run of five consecutive wins followed. We did play better than in the 11-game winless run, but there wasn’t that much in it, really. We were consistent across the whole season, and that meant that our poor run turned into a very, very good run.

That run of wins wrapped up seventh place for us. It was Burnley’s best finish in 44 years, and the first time they had qualified for European competition in 51 years.

It was massive for the club, and a huge feather in the cap for the players to have achieved that in such a tough league. I was particularly pleased for our fans, who had followed us everywhere we went and were just brilliant.

We were delighted with what we’d achieved, and we enjoyed it. But within three days of the season finishing, we were thinking about the next campaign.

Our focus turned to preparing for European trips, quick turnarounds before Sunday games, and the extra strain that would put on our schedule.

It was time to think about how we could go again. It was time for the next reset.