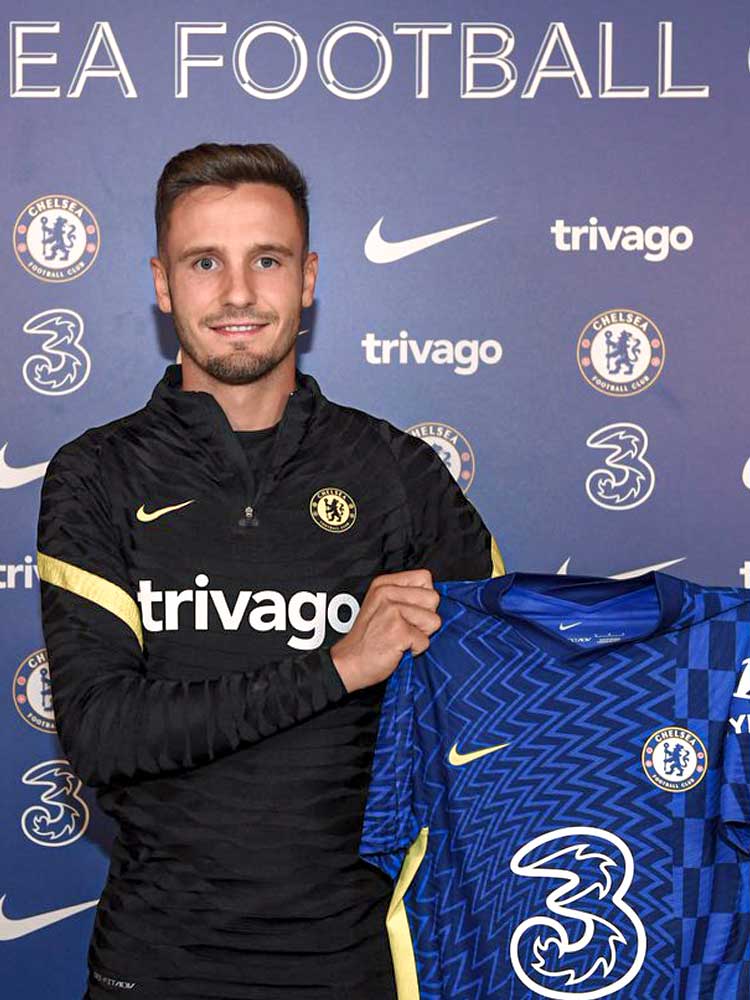 Profile
Jorginho, Mateo Kovacic, N'Golo Kanté, Mason Mount, Ruben Loftus-Cheek and Ross Barkley were already vying for selection in Chelsea's central midfield when Saúl Ñíguez arrived on loan from Atlético Madrid. Such intense competition meant that only the highest calibre players would represent a worthwhile recruit, and aged 26 when he unexpectedly moved on transfer deadline day, Saúl has often proved exactly that.

One of the central figures in Atlético's success throughout the modern era, he has also consistently demonstrated the qualities required to have a similar impact in the Premier League. Chelsea paid a loan fee to sign him for 2021/22 and have also agreed an option to sign him permanently, and it seems unlikely they will not take it. "They are a fantastic team," he said. "This transfer is a step out of my comfort zone. I believe that you will see a new Saúl in a new place."

Tactical analysis
The left-footed Saúl is a particularly versatile player who regularly succeeds at progressing possession in a variety of circumstances. He is just as effective at combining in limited spaces as he is when playing longer-range forward passes or dribbling; he, regardless, largely focuses on avoiding pressure to instead prioritise starting or supporting attacks, and if under reduced pressure can also play with his right foot.

Similarly capable of taking delicate touches and delivering backspin and the necessary height to play over defences, Saúl also impresses when playing the ball in behind from deeper territory (below) and into those making forward runs. If he is instead already in attacking territory, he prioritises playing into the inside channels, potentially between full-back and central defender and with increased backspin into the limited space.

Penetrative passes played along the ground target similar spaces between opposing defenders (below), and prove more effective off the back of his ability to receive and release possession with so few touches – a further trait he consistently demonstrates. If he can improve his body shape in the moments before receiving the ball so that it is less closed off, he can become even more effective.

His control and first touch, and his ability to manouevre his hips, means that he can often overcome that and continue to play the ball without delay. As is the case when he is the one playing passes or making his many off-the-ball runs to create space for his teammates, Saúl is at his most effective receiving the ball in the centre of the pitch or when moving into the left inside channel; it is when he is wider that he can lose some of the accuracy otherwise expected of him.

That same versatility extends to when he is required to defend, when Saúl works particularly hard to press with aggression, screen and cover passes, make recovery runs, and adapt to the nature of second balls. He impresses from a screening role in the centre of the pitch, when his intelligence and sense of timing contributes to his ability to adjust in response to the opposition's attack – perhaps to press as an individual.

His eagerness when pressing from behind, however, can lead to Saúl conceding free-kicks, not least if he is attempting to follow an opponent carrying the ball. If positioned in the centre of the pitch he can more efficiently recover his defensive position and press from both sides – and potentially force the ball in one direction, not least if he is supported by those around him. It is when he is chasing the ball backwards and can only approach from one side that he is less convincing (below), and when his opponent is likelier to either be fouled or gain territory.

Role at Atlético Madrid
Saúl featured in a variety of positions across 2020/21. He was most consistently a central midfielder in a 4-4-2, but there were also occasions he played narrowly in front of a back three. If they were organised into a 4-4-2, Atlético's two wide players attacked infield, where they occupied the inside channels and offered closer support to their front two – Luis Suárez was their leading striker, and the movements made around him by Ángel Correa, Marcos Llorente or João Félix limited the freedom of Saúl and Koke from central midfield.

Saúl was instructed to quickly play the ball to Atlético's central attackers or the full-backs who advanced to provide their attacking width, support and play crosses, and contribute to potential combinations with the relevant wide midfielder. Should Atlético's front two instead remain advanced, Saúl had increased freedom to advance and make off-the-ball runs, after which he often contributed at the second phase of play into that front two or if having moved inside of a wide midfielder.

Opponents' defensive compactness in those areas meant that Saúl was often more effective when supporting from behind the ball or creating space for others with his movements. Him doing so was also complemented by the defensive qualities that extended to him covering, pressing, delaying opponents, and offering protection from behind the ball.

On the occasions Diego Simeone favoured a back three, Saúl was given a similar role from which he offered support to numerous attacking players advancing through central territory and provided cover inside of their wing-backs. The additional central defender meant that there existed fewer numbers ahead of Saúl, but that he had increased freedom to advance off the ball. When that was the case he continued to prioritise the left inside channel and to support inside of their left-sided wing-back, and often focused on being the player to work the ball into positions from which that wing-back could cross, or to work it into their narrow attacking line. He, similarly, therefore often had to instigate a counter-press, instead of covering from a withdrawn position.

Atlético’s increased use of a back three meant that, unlike in previous seasons, Saúl rarely operated from the left of a midfield four. From a midfield three he withdrew into deeper territory to receive the ball and link play from central defence and into their left-sided wing-back, particularly if there existed reduced space for him to advance into.

On the rarer occasions he was used on the left in front of a back three he received in particularly wide territory and provided their attacking width with overlapping runs before recovering into defence to contribute to a back five when possession was lost. He was also required to make an increased number of recovery runs, to defend those wide areas when one-on-one, and to become a permanent feature of a back five when a deeper block was required.