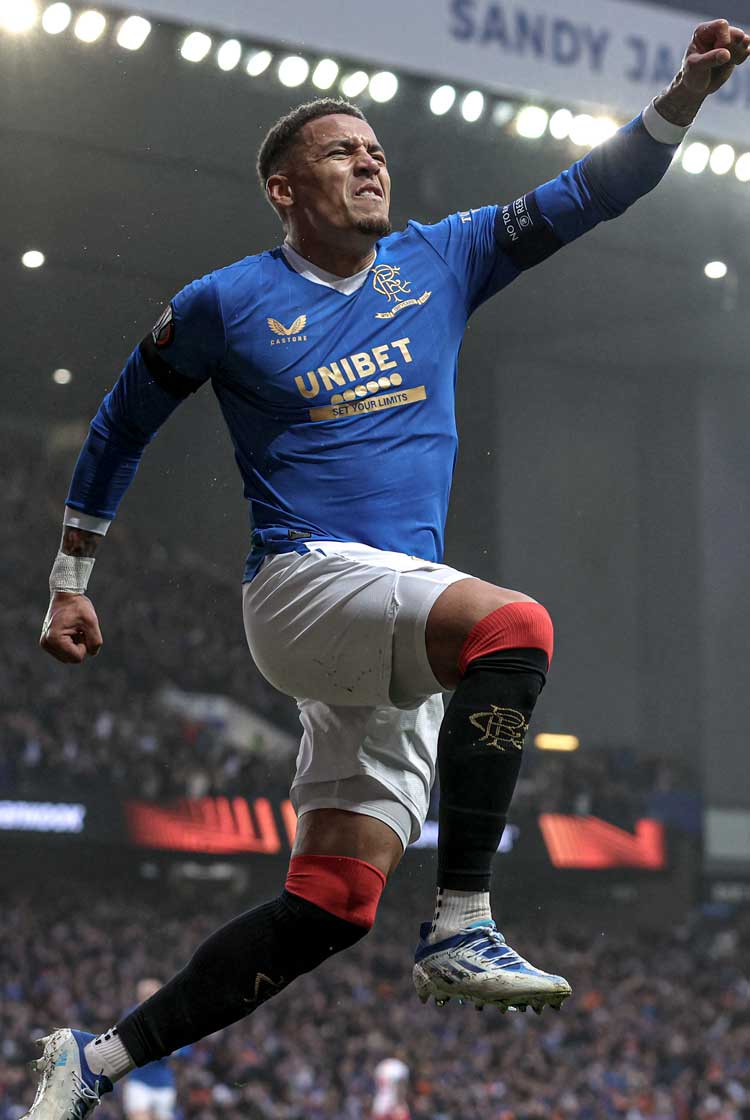 Rangers are heading to Seville for the Europa League final after a famous victory over RB Leipzig at Ibrox. Trailing 1-0 from the first leg and roared on by 50,000 fans in a packed stadium, Giovanni van Bronckhorst's side started the game at breakneck speed and flew into a two-goal lead on the night – and a 2-1 aggregate lead – inside 24 minutes. Christopher Nkunku pulled one back for Leipzig, but John Lundstram provided the telling goal from a set-piece 10 minutes later to send Ibrox into raptures.

“It’s been an amazing night,” said Van Bronckhorst. “We had the start we wanted, it was important to score first in this game. At half-time, we knew it would be hard because they needed to push and they did. I knew the next goal would be decisive, John’s goal gave us the energy and power to play the closing minutes. I am very proud. The interaction with the fans was amazing. I have had so many games here as player and manager but the atmosphere here was incredible.”

Rangers set up in a 3-4-3 attacking shape and came up against RB Leipzig in a 5-2-3 defensive structure. On the Rangers right, wing-back James Tavernier overlapped constantly and rotated with Scott Wright when he dropped to receive (below). Centre-forward Joe Aribo also dropped to receive in the right inside channel, while Ryan Jack provided the central-midfield link between the three centre-backs and these rotations on the right.

Direct play down the left

Rangers were much more direct when attacking down their left side, with left centre-back Calvin Bassey playing passes over Leipzig’s press, and middle centre-back Connor Goldson often switching play towards this side. Ryan Kent held his width, but it was Glen Kamara’s forward runs from central midfield (below) that helped Rangers progress. This kept Aribo in a central position to provide a penalty-area presence, while Tavernier continued to overlap on the right. Rangers’ first goal came from a direct pass into Kamara’s forward run, before he combined with Kent, who crossed for Tavernier to score.

John Lundstram was moved into central midfield in the second half, adding defensive qualities in front of the defence. Kamara was still able to push forward and support the substitute centre-forward, Fashion Sakala. Scott Arfield was then introduced on the right; he took up positions similar to Kent on the Rangers left, which meant Rangers could attack with more width (below). Wing-backs Tavernier and Barisic then overlapped with delayed forward runs, having waited for Arfield and Kent to attract Leipzig’s wing-backs before making their move.

Throughout the second half, Rangers’ attacking play around their opponents proved most effective, with the wing-back and wide midfielder pairings proving pivotal. Their attacking width forced Leipzig to push their wider centre-backs across earlier, creating key 2v2 situations in the inside channels (below). Although this opened up significant space through central midfield, Rangers failed to capitalise, with the double pivot of Lundstram and Kamara now much deeper. However, Lundstram grabbed Rangers’ vital third goal from a set-piece, sending Rangers to the final following an impressive turnaround after their first-leg defeat.

Leipzig used a 3-4-2-1 formation in possession, and came up against Rangers in a 5-4-1 defensive shape. The home side was roared on by an intense Ibrox atmosphere, and their aggressive press limited Leipzig’s build-up play. Rangers man-marked, with the wing-backs and central midfielders marking their direct opponents, and the visitors’ three centre-backs taken by the hosts’ front three (below). Whenever Dani Olmo dropped to connect, Rangers were happy to commit more bodies to the press. Their second goal came following a high regain.

When Leipzig broke through midfield and into the final third, Christopher Nkunku made runs across the pitch and beyond the Rangers defence, bending his movements from the left inside channel. Yussuf Poulsen then rotated out, with Olmo narrowing to receive as a number 10. On the right, wing-back Benjamin Henrichs had significant space to push forward into (below).

In the second half, Olmo and Poulsen played in support of Nkunku, who focused on stretching the opposition and attacking the space beyond Rangers’ three centre-backs. This created space on both sides for the wing-backs to attack into. Depending on how Rangers’ own wing-backs pressed the ball, Angeliño and Henrichs either disguised passes inwards for the number 10s to receive on the outside of the hosts’ two central midfielders, or bent balls into the channels for Nkunku to chase (below).

Leipzig’s left side became the key point of their attack as the game wore on, with Dominik Szoboszlai replacing Olmo and becoming the main link behind a permanent centre-forward pair of Poulsen and Nkunku. Henrichs still had space to push forward into on the right, but on the left central midfielder Konrad Laimer gave Angeliño more support (below). As Rangers fell into an increasingly deep block, Leipzig were happy to leave Kevin Kampl as a single pivot in front of the defence. Although Angeliño’s superb cross found Nkunku to level the tie on 70 minutes, the visitors fell behind once more and were unable to find a crucial second goal.