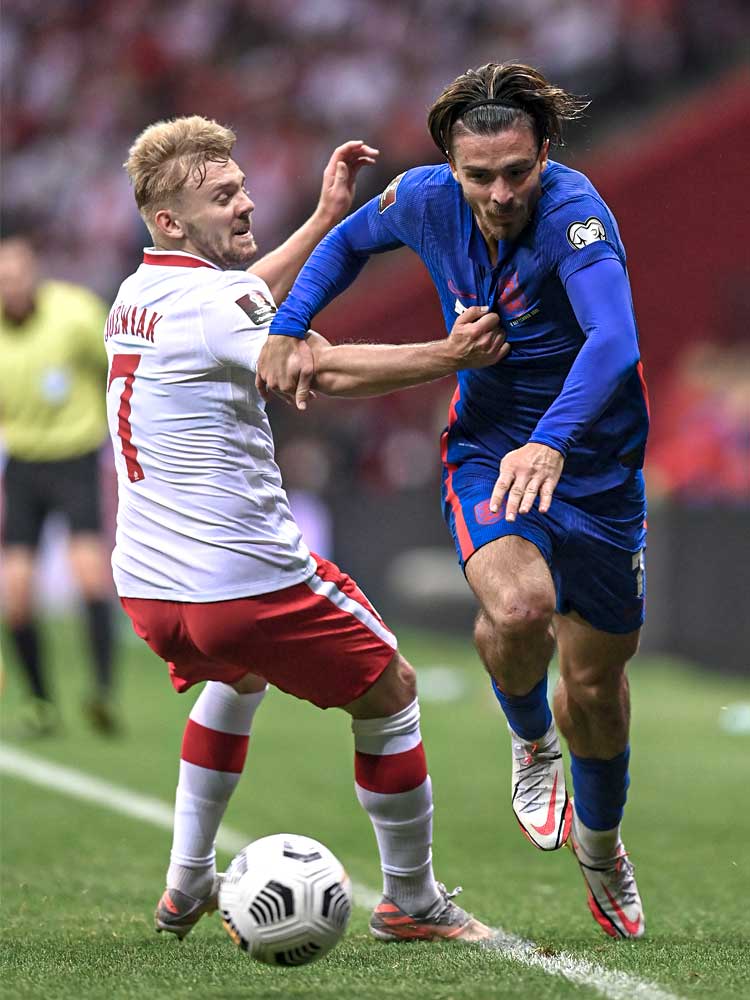 England dropped their first points of their qualification campaign for Qatar 2022 when substitute Damian Szymanski headed Poland's equalising goal in second half stoppage time. Harry Kane had given England the lead when an impressive strike from range found the back of the net in the 72nd minute, but like their hosts, England rarely looked like scoring. They regardless remain top of Group I by four points, with four remaining fixtures – their most difficult test having just been negotiated. After an often frustrating and occasionally bad-tempered affair, England's manager Gareth Southgate said: "We were playing well, we were in control. At those moments, it's not easy to come on as a substitute and we would be taking people off for the sake of it. We wanted to make substitutions towards the end, but when the goal went in we thought there was no point because we would be adding time on." His opposite number, Paulo Sousa, said: "The second half was difficult for us. England went to a very high level of intensity. We defended quite well."

Paulo Sousa set Poland up into a 3-1-4-2 formation led by the front two of Adam Buksa and Robert Lewandowski. Their opponents, England, defended with the same 4-2-3-1 with which they attacked.

England sought, where possible, to press Poland. Harry Kane, Jack Grealish and Raheem Sterling worked as a three to close down Poland's three central defenders, Mason Mount, Kalvin Phillips and Declan Rice formed another three that prioritised Poland's three central midfielders, and Kyle Walker and Luke Shaw took their opposing wing-backs. When the ball was towards one side of the pitch and the full-back engaged his wing-back, the full-back on the opposite side of the pitch moved to form a compact back three and maintain a numerical overload against Buksa and Lewandowski.

Poland attempted to play with speed, and regularly looked to play forwards early, which led to numerous turnovers in possession, and contributed to both teams' struggles to build momentum – something that, for the hosts, mostly proved positive. Their straight, forward passes served as a pressing trigger for England, who attempted to force the player receiving the pass back towards his own goal to discourage further forward play.

Sousa's team offered some potential in wide territory by drawing England's full-backs towards them with diagonal passes into that same territory before looking for combinations between the relevant wing-back and central midfielder and targeting the space in behind their opposing full-back. England, regardless, mostly offered cover via their midfielders, and defended well against their efforts until added time, when quick play from one side of the pitch to the other eventually led to Poland's equalising goal.

England were organised by their manager Gareth Southgate into a 4-2-3-1 formation led by Harry Kane. Their hosts, Poland, defended with a 5-3-2.

Poland started with an aggressive press, and established what was essentially a man-for-man pressing system. Their wing-backs took their opposing full-backs, their three central midfielders prioritised a three-on-three in the centre of the pitch, and their wider central defenders, when required, dropped with Raheem Sterling and Jack Grealish, leaving Kamil Glik on Kane.

If that aggressive press was not being applied, Poland withdrew into their 5-3-2 and attempted to limit England's space – particularly that that would have existed between the lines and in behind. Kalvin Philips and Kane rotated in midfield to test Jakub Moder and Glik, whose initial reluctance to track Kane encouraged him to withdraw into midfield, receive, and turn and advance while unchallenged. During the first half there were times that Kane offered those movements as Grealish and Sterling ran in behind, but the execution of passes into space lacked the necessary quality.

Declan Rice attempted to enhance England's attacking potential via two approaches. The first involved him being positioned between Poland's front two, receiving passes to his feet to draw that front two closer together, and then him playing the ball to either Harry Maguire or John Stones, who capitalised by carrying the ball forwards. For the second he withdrew to between the two central defenders to form a back three and encourage Kyle Walker and Luke Shaw to advance – Walker, potentially, into midfield to release Phillips – creating potential two-on-ones in wide territory and occasionally increasing the numbers they offered in the centre.

Both helped England to progress beyond Poland's midfield, but thereafter they consistently struggled to stretch their defence. They were flat in the final third – individuals regularly  moved to receive to feet, but too rarely stretched their hosts by threatening in behind or making selfless runs to create space for others – so Poland regularly proved capable of resisting their attacks. It was when a third player contributed towards the left that England had greater potential on the blindside and via combinations and could advance in behind, but it was too rare that they did so.

Kane gave England the lead from range when too little pressure was being applied to him, but the fact they recorded only two shots on target was more telling. They lacked creativity, dynamism, and an attacking threat.